By Steve Tsilimos | Posted 8 months ago 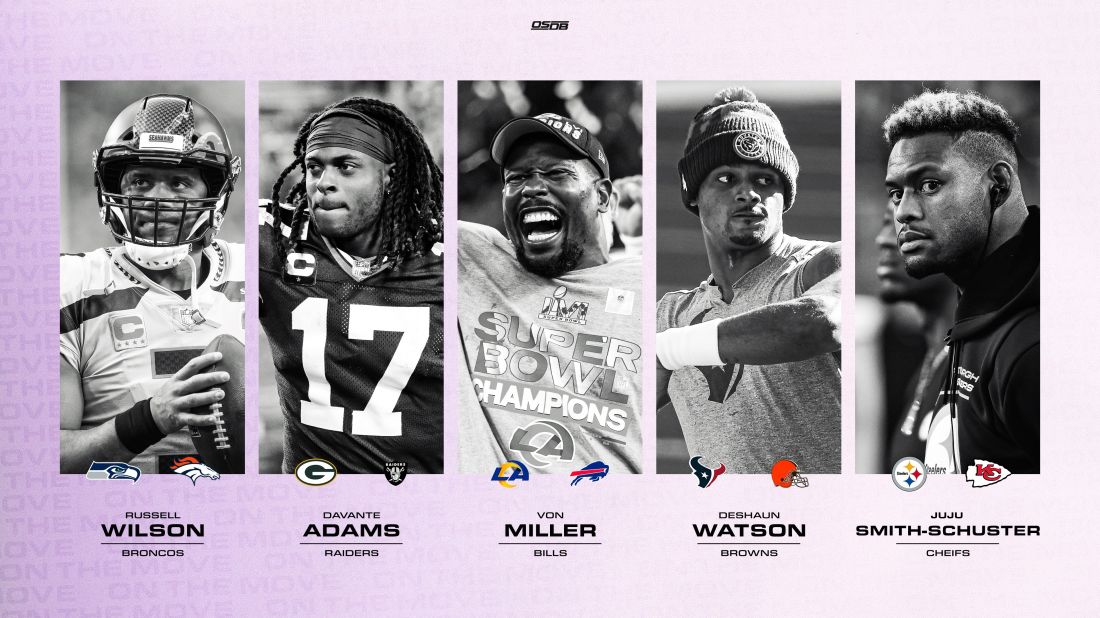 The NFL has given fans a lot to follow along with this March. Many big names have either been on the move through free agency or via trades. Most of the teams that have been making the biggest changes to their rosters this offseason are in the AFC.

The first big move of the offseason came when the Seahawks traded Russell Wilson to the Broncos. The Broncos are not the only team in the AFC West that is going all in this offseason. The whole division made some big moves, proving they are tired of the Chiefs dominating the division and are ready to take down the champ of the last six seasons.

The Chiefs are the only team in the AFC West that has stayed quiet this offseason. The other three teams have greatly improved their rosters, making this the undisputed toughest division in the AFC and possibly the entire NFL.

The Broncos arguably are having the best offseason of any team in the NFL. An organization is winning anytime they can add a first-ballot Hall of Fame QB to an already loaded roster. Bringing Wilson to Denver was not cheap, but it also seems like good value when you consider how much it changes their outlook for at least the next few seasons.

The Broncos also went out and picked up three offensive linemen to help protect Wilson. The cherry on top is the two defensive players Denver added to their second-ranked defense from 2021. The Broncos went from a midlevel team to a serious Super Bowl contender in a matter of a few weeks.

There was much speculation around how the Raiders’ front office felt about Derek Carr as their franchise QB. The Raiders squashed all the doubts by going all in this offseason. The biggest move was trading for Davante Adams – arguably the best WR in the NFL. Carr has never had a bona fide No. 1 receiver but that is no longer the case. The offense went from good to scary by adding Adams to the mix with Josh Jacobs, Darren Waller, and Hunter Renfrow – all are skilled players.

Las Vegas did not stop on the offensive side of the ball. They re-signed their star pass rusher Maxx Crosby and added another elite pass rusher in Chandler Jones. They also added two CBs to their defensive backfield, which was an obvious weak spot last season. Vegas who finished 10-7 and made the playoffs last season is now ready to make a run at the Super Bowl.

The Chargers re-signed Mike Williams, which means their strong core of offensive play-makers will all be back from last season. The Chargers’ defense is what ultimately kept them out of the playoffs last season, and they addressed that. They may have slightly overpaid but they signed one of the top corners on the market in J.C. Jackson and traded for a former defensive MVP in Khalil Mack.

Now the Chargers have a shut-down corner and one of the best pass rushers in the game. Their defense went from average to a nightmare for opposing offenses. If their franchise QB Justin Herbert takes another step forward then the Chargers are another team that is a serious Super Bowl contender.

Going into last season the Browns had a top-five roster from top-to-bottom but they failed to make the playoffs. A lot of the blame was put on QB Baker Mayfield’s shoulders. Many Browns fans were once again in a familiar situation – calling for a change at QB.

The front office in Cleveland heard the call and pulled off one of the biggest trades in NFL history by acquiring Deshaun Watson. The Browns are sending a package of picks, including three first-round picks and a handful of players to bring the 26-year-old Pro Bowl QB to Cleveland. Browns fans are still split because Watson is facing 22 civil lawsuits alleging sexual assault or misconduct.

Since the Browns are risking a lot of future capital to bring Watson in it’s hard to know if they won this offseason until we see the QB perform the next five years. Cleveland also landed Amari Cooper, who is one of the NFL’s best receivers in his prime. If Watson does play anywhere near his level of play in 2020 – Watson led the league in passing yards – then the Browns will have one of the toughest offenses.

The Chiefs' dominance is being felt far beyond their division. The Bills know that the only way to beat Patrick Mahomes and the Chiefs is to pressure the QB. So the Bills signed two-time Super Bowl champ Von Miller to a six-year, $120 million contract. They are also bringing in two DTs to strengthen an already stout front seven.

Saffold is a nice addition on the offensive front to help protect Josh Allen. Howard is a great value to complement Dawson Knox at TE. The Bills are as hungry for a Super Bowl as an organization can get and they are doing everything they can to win in 2022.

New head coach Mike McDaniel is doing an overhaul of the roster and building it from the ground up. The Dolphins needed running backs more than any team and went and found great value in Edmonds and Mostert. Bridgewater seemly is a great fit to help mentor Tua Tagovailoa and to be a solid starter if needed.

On the defensive side of the ball, the Dolphins are bringing back many key young defensive players from the past two seasons. Keeping Ogbah in Miami on a four-year deal is a great way to anchor their defense for some time to come.

The Colts seemingly won when they were able to trade Carson Wentz to the Washington Commanders. After only having him on the roster for one year, the Colts were eager to get out from under Wentz’s contract. They were able to get two third-round picks and move up five spots in the second round of the upcoming draft. To fill the void at QB the Colts only had to give a sixth-round pick to acquire 4x Pro Bowl QB Matt Ryan from the Falcons.

Ngakoue is a potential steal entering his age, 27, giving them a potential long-term answer off the edge. The Colts still need some help up front and out wide on the offensive side of the ball, but their team looks much better now than it did a few weeks ago.

AFC Players who won this offseason

The NFL has not suspended Watson yet, but the QB’s camp has made sure he is protected by signing a fully guaranteed contract. The Browns are fully guaranteeing a five-year, $230 million contract for Watson, making him the NFL's second-highest-paid QB behind only Aaron Rodgers. That type of money for a player who did not play last season makes Watson one of the biggest winners of the offseason. Watson’s salary is about $1 million for 2022 and he received a $45 million signing bonus, which will not be hit if there is an upcoming ban.

Christian Kirk signed a four-year, $72 million contract with the Jaguars on March 14, 2022. Kirk received $37 million fully guaranteed at signing including a $20 million signing bonus. The $18 million-per-year average puts Kirk in the top 10 of highest-paid players in the NFL.

Trubisky is not necessarily going to be the starting QB for the Steelers but he has a good chance to be. Ben Roethlisberger retired after 18 seasons leaving the door open at QB for one of the most successful organizations in the NFL. It seems like a great fit for both sides – the Steelers get a highly talented, hungry QB and Trubisky gets to try and turn his career around while playing for a great organization.

Laken Tomlinson is a great run blocker whom the 49ers essentially got in a trade for free from the Lions before helping him turn his career around. Tomlinson signed a three-year, $41.2 million contract with the New York Jets. The Jets gave Tomlinson the second-highest guaranteed contract for a left guard in the league.