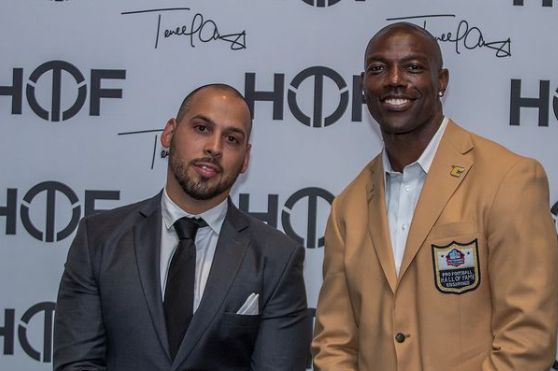 The average NFL career is about four years. In the NBA, it’s about 4 1/2. So professional athletes have a finite time in which to make as big an impact as possible, both on the field and off it.

Building a brand is a critical part of athletes setting themselves up for success after retirement, but that’s tough to do alone. That’s where Doug Sanders of Sanders Sports and Entertainment (SSE) comes in.

Sanders has been around professional athletes and celebrities throughout his life. He has family members in the music industry, was friends with Channing Frye at the University of Arizona before Frye was drafted 8th overall by the Knicks in 2005 and has been building his agency for the last half-decade.

His goal isn't to just make these players the most money possible, but to help them make an impact in the areas they’re most passionate about now and in the future.

“It aligns with really helping the guys grow. Unfortunately, for sports, it’s a very short window typically where they have these years they can capitalize on, but if you do it right, I think you can create a legacy that lasts beyond your playing days,” Sanders told OSDB via phone. “But I also think there’s something to be said for how you manage that time and what you do with that time to also make an impact on as many people as possible.

“And that’s why I'm so passionate about what guys can do as they have this platform to really reach back and give back to the communities or causes that matter most to them. And for me, I find the most joy and excitement in helping them build those two pillars really well.”

Recently, Sanders helped Hopkins fulfill one of his childhood dreams to be on a box of cereal. And although it was a nice personal goal for Hopkins, it didn’t just benefit him. He used the opportunity to give back to a cause he cares deeply about.

Sanders helped Hopkins secure a deal with PLB Sports and Entertainment, the brand behind Flutie Flakes, for his own cereal line called DeAndre’s Hop Box. A portion of the money made from the line of cereal will go to S.M.O.O.T.H. (Speaking Mentally, Outwardly Opening Opportunities Towards Healing), a non-profit organization started by Hopkins and his mother, Sabrina Greenlee, to help survivors of domestic violence.

"One of things that DeAndre is most passionate about is helping others..." Sanders said, "Domestic violence is something that we always look to support, given his mother's situation, and whenever the opportunities arise we try to include our brand partnerships to not only spread awareness, but hopefully make a financial impact as well."

In addition to Hopkins’ line of cereal, Sanders helped the wideout land partnerships with Beyond Meat, Therabody, BioSteel and Oars + Alps – all health and wellness industries Hopkins is passionate about.

Three years ago, Sanders was an integral part of Terrell Owens’ Hall of Fame celebration. After being snubbed by voters for several years, Owens decided to hold his own celebration in Chattanooga, where he went to college, instead of in Canton with the rest of the Class of 2018.

It was Owens’ idea, but it was one Sanders supported and helped coordinate for the legendary wide receiver. He went through the Hall of Fame’s orientation weekend with Owens and the other inductees, which isn't widely known.

“T.O. and I have been extremely close for years, have worked together for years. We’ve been through the Hall of Fame process together throughout,” Sanders said. “Terrell said it to me and I was against it. I was like, ‘There’s no way, you have to go, you deserve this.’ Everything one would say not only as a representative, but as a friend wanting him to get his roses. I felt it was well-deserved and he needed to feel his shine and that embrace from the people that he well-deserved.”

“One of the things I did that I think maybe hasn’t come as much to light is we made sure Terrell attended the orientation weekend with his brothers who were included in their Hall of Fame class. We went through everything. Terrell was a part of everything and what we found was that wasn’t what fit him best.

“He felt if he was going to do his Hall of Fame ceremony, he wanted it to be with the people he loved most and at a place that showed the most love and I respected that decision and supported that decision wholly. That’s why he chose to do it at UT Chattanooga and of course, I was there to support him and help plan that out with our team. And along the way, still being in communication with the Hall of Fame and being respectful and mindful of his brothers there throughout that Hall of Fame class.”

One of Sanders’ newer clients is Godwin, who he’s worked with for about a year and a half now, and has “done some amazing work” with him. In a partnership with Invisalign, Godwin helped provide people in need with clear aligners to correct their smiles.

“We were able to provide a child with an Invisalign set with Chris’ orthodontist down there (in Florida) and partnered officially with Invisalign for every touchdown, he gave away full Invisalign treatment to a person of need, which was an amazing partnership,” Sanders said.

Additionally, Sanders helped set up a partnership between Godwin and Verizon to help a small business in the Tampa Bay area where Godwin plays.

He made a donation to help Culture Books, which is aimed at helping to improve literacy.

“We continued our existing partnership with Verizon, where Chris Godwin gave back to a small business in the Tampa Bay area that was greatly impacted due to COVID. We aligned with them and he made an appearance on “Good Morning America” and made a donation to that bookstore down there in St. Petersburg,” Sanders said.

Chad Johnson is another client and Sanders has helped leverage his passion for video games – specifically FIFA and Madden – into partnerships with EA Sports. Johnson called himself the FIFA King and would play gamers no matter where or when, connecting with his fans and the community.

"Chad has a passion for gaming. He always loved soccer, as a whole, especially FIFA," Sanders said. He would pull up at people's houses all the time and game with anyone. Sometimes I would be afraid because I knew Chad was going to leave the hotel and have somebody come pick him up and play. And I'm like 'Dude, you're nuts! We can't do this!'"

“But it was so real for him, then we obviously wanted to see if we could extend that into a more established relationship with FIFA on a more business level rather than him just playing. It was toying around with some of those ideas where Chad called himself the FIFA King, so we initially created a content series called FIFA King that was through EA’s social channels and YouTube where he was playing other guys like Jay Ajayi and a number of different people. From there, the relationship blossomed.”

Johnson has also taken up a role as a Madden ratings adjustor the last couple of years, helping the developers decide what ratings players should have in a given season.

“We’ve continued to work with EA throughout the years in an official capacity and growing beyond just the FIFA franchise and doing a lot with the Madden franchise,” Sanders continued. “I think you see who Chad is, you know who he is. He’s so connected to the game and the reason we’re able to do something with him as the ratings adjustor is because he knows these guys. He’s actually down there training a lot of times with some of these younger players, route-running with them, he’s out there defending them, teaching them the game, so he sees this. And he’s able to give a firsthand approach to what their ratings should be or just talking to them and understanding why the guys feel their ratings should be different.”

Outside of the NFL, Sanders works closely with Nick Young, who won an NBA championship with the Warriors in 2018. Young is passionate about fashion and music. His personality made him a fan favorite, whether it was with the Lakers, Warriors or Wizards.

“It’s amazing. Nick is a unique and special individual and had a passion for many things outside of the game, but he never let the game slip away from him,” Sanders said. “His love for fashion and music shined through during his playing days and thankfully, his social following and engagement and fanbase loved and were excited to follow along with Nick. He’s such an infectious personality that we were able to do some great collaborations throughout the years.

“Nick's strong passion for fashion led him to start Most Hated. Nick attended multiple fashion shows. We’re talking Milan, Paris, New York. Along the way, it wasn’t so much that Nick wanted to be there and be a face in the audience. No, he wanted to be a part of that industry. His way about that was, ‘Can I create my own merch somewhere?’ Sort of like what Kanye was doing back then. Nick wanted to kind of try that. And that’s where he came up with the idea of Most Hated.”

Sanders is building his client base and connecting with players so that he can help them develop their personal brands. While there are players he seeks out to bring into SSE, a good portion of his business is referral-based where his clients refer other players to him.

“I think it’s a little bit of both,” he said. “I’m thankful and humbled and blessed to be in the position I'm in now where a lot of my business is referral-based. There are unique personalities and ballplayers that I go after that I think fit the mold of what we’re trying to accomplish. It's much more than just having them be the face attached to a marketing campaign. How can we authentically build their story? Not only through brand strategy, but storytelling. A big portion of what we do is PR-driven, community-based and making sure we’re giving back to the communities that matter most to them.”

Sanders wants fans and those in the communities where players make a name for themselves to recognize athletes as more than just athletes. They’re parts of the local community, too, and he’s there every step of the way to help players set themselves up for success during their careers, but just as importantly, after they retire, too.

“It’s about building out and developing what that storyline is and really pushing that narrative of who the guys are beyond just being ballplayers,” he said. “It may sound a bit cliché, but they are much more than just athletes."