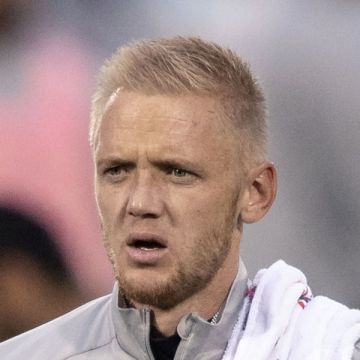 The Colorado Rapids are an American professional soccer club based in the Denver metropolitan area. The Rapids compete in Major League Soccer (MLS) as a member of the Western Conference. Founded in 1995, the club is a founding member of MLS, playing their first season in 1996. The Rapids are owned by the Kroenke Sports & Entertainment, also owners of the Denver Nuggets of NBA, Colorado Aval...

The Colorado Rapids are an American professional soccer club based in the Denver metropolitan area. The Rapids compete in Major League Soccer (MLS) as a member of the Western Conference. Founded in 1995, the club is a founding member of MLS, playi...

0-3 loss to the Kansas City Wiz

The Colorado Rapids are an American professional soccer club based in the Denver metropolitan area. The Rapids compete in Major League Soccer (MLS) as a member of the Western Conference. Founded in 1995, the club is a founding member of MLS, playing their first season in 1996. The Rapids are owned by the Kroenke Sports & Entertainment, also owners of the Denver Nuggets of NBA, Colorado Avalanche of NHL, and other sports teams outside of the state of Colorado.

Colorado won the MLS Cup in 2010, their second MLS Cup appearance. The first appearance was in 1997, losing to D.C. United. They were also runners-up of the U.S. Open Cup in the 1999 tournament, where they lost to the Rochester Raging Rhinos, the last time a non-MLS team has won the Cup. The Rapids play their home games at Dick's Sporting Goods Park in Commerce City, moving to the stadium after it opened during the 2007 season.

The Colorado Rapids were one of the ten founding clubs of Major League Soccer, owned and operated by the Anschutz Corporation. The inaugural 1996 season was a forgettable one for Colorado. Despite fielding experienced players like Shaun Bartlett, Chris Henderson, Chris Woods, Roy Wegerle and Marcelo Balboa, and head coach Bob Houghton, the team finished last in the Western Conference with the worst record in the league. Balboa became the first player ever to score for the club and also the first to record a goal at Mile High Stadium (in 1996).

For the following season, Glenn Myernick was hired as a new head coach and Dan Counce joined as a general manager. Myernick and Counce brought new faces to the squad including Paul Bravo, Wolde Harris, Ross Paule, and keeper Marcus Hahnemann. The team struggled early on but rallied to grab a post-season spot. The Rapids pulled off two upsets and advanced to the 1997 MLS Cup final. Chris Henderson scored a mid-air volley past Dallas keeper Mark Dodd in the 87th minute in the Western Conference final, ensuring Colorado's place in the MLS Cup final. They scored in the Cup thanks to a goal by Adrián Paz but lost the final 2–1 to D.C. United.

The Rapids enjoyed a successful inaugural year at Dick's Sporting Goods Park, hosting numerous international exhibitions and tournaments on the stadium's complex, and the 2007 MLS All-Star Game; on the pitch though the team's record was 9–13–8. The team started out strong with a 2–1 victory over D.C. United in frigid conditions. Herculez Gomez became the first player to score in the Rapids' brand new stadium. The team had a long winless streak that saw them sink in the standings. Colorado ultimately finished just shy of a playoff spot. Major low points in the season included an embarrassing 5–0 loss to the Seattle Sounders in the Lamar Hunt U.S. Open Cup and a defeat to Real Salt Lake that saw them lose both a playoff berth and the possession of the Rocky Mountain Cup. The club won the MLS Reserve League for the second consecutive year.

The 2010 campaign featured many roster moves: Danny Earls, Jeff Larentowicz, Claudio Lopez, Quincy Amarikwa, Ian Joyce, and Wells Thompson join the club. The offseason also included a new contract for star forward Conor Casey. The Colorado Rapids also excited many of the ultras supporter groups by the creation and construction of a supporters terrace within Dick's Sporting Goods Park. During the summer transfer window, the Colorado Rapids signed academy youth player Davy Armstrong, and brought in defender Anthony Wallace from FC Dallas. Colorado also sent Mehdi Ballouchy to New York Red Bulls in exchange for Macoumba Kandji and acquired Brian Mullan from Houston Dynamo in exchange for Colin Clark. Following these changes, Colorado qualified for the MLS Cup playoffs and defeated the Columbus Crew in the first round. On November 13, Colorado hosted the San Jose Earthquakes in the MLS Eastern Conference Championship and won by a score of 1–0, leading to the team's first trip to the MLS Cup since 1997. Colorado faced off against FC Dallas in the finals. During the final, the Rapids trailed 1–0 at halftime. Conor Casey equalized in the second half to send the game to extra time. Macoumba Kandji helped set up the game-winner that went off FC Dallas defender George John. Colorado won the 2010 MLS Cup 2–1, Colorado's first MLS Cup championship and first major trophy in the club's history.

Under Mastroeni's first year as head coach, Colorado finished eighth in the West and seventeenth overall having 8 wins, 18 losses, and 8 ties having the Rapids fail to qualify for the MLS Cup Playoffs, after previously qualifying last year. Despite an upper-mid table performance to start the season, the club was plagued heavily by injuries, causing the team to go winless in their final fourteen matches of the season. In the U.S. Open Cup, the Rapids were eliminated from the tournament to the Atlanta Silverbacks. Additionally, they were unable to defend their Rocky Mountain Cup title, losing to rivals, Real Salt Lake.

During the off-season following the 2015 season, where Colorado finished last in the Western Conference, The Rapids had made major changes in their line up, which includes acquiring players: Shkelzen Gashi, Marco Pappa, Jermaine Jones and Tim Howard, who all joined by the summer transfer window. The club went on to having a successful 2016 campaign with a 15-game unbeaten streak and a trip to the western conference championship in which they lost to Seattle Sounders 3–1 aggregate. The 2017 campaign saw the departure of Jermaine Jones, and several weeks into the season, the Rapids made more changes to their roster by trading Sam Cronin and Marc Burch to new expansion side Minnesota United. The team struggled, and head coach Pablo Mastroeni was fired by the end of the season as the Rapids finished the 2017 season with 9 wins, 19 losses and 6 draws, good for 10th in the Western Conference.

For the 2018 season, the Rapids hired former New Zealand coach Anthony Hudson. The Rapids made many additions, including wingback Edgar Castillo and midfielder Jack Price while switching to Hudson's preferred 3-5-2 formation. The season began with the Rapids being eliminated from the 2018 CONCACAF Champions League by Toronto FC, a tournament they had qualified for on the strength of the 2016 campaign. The middle of 2018 saw another major trade with 2017's leading goalscorer Dominique Badji being traded to FC Dallas for Kellyn Acosta. Despite the changes in the 2018 season, it ended with another 10th place Western Conference finish, with the Rapids accruing 8 wins, 19 losses and 7 draws.

For 2019, the Rapids turned their attention to MLS veterans for additions to the roster adding Benny Feilhaber, Kei Kamara, Diego Rubio, and Keegan Rosenberry. The team also added youngsters Jonathan Lewis, Matt Hundley, Sam Raben, and Andre Shinyashiki to the squad. In the preseason, the Rapids parted ways with Sheklzen Gashi. Despite the changes to the team and scoring in every game but one, the Rapids began the 2019 season winless in their first 11 games. The Rapids parted ways with Hudson after going winless in the first nine games of the season. The club named Conor Casey as interim head coach on May 1. Casey led the Rapids to a record of 7 wins, 7 losses, and 4 draws. On Aug. 25, the Rapids named Robin Fraser the club's ninth permanent head coach. Fraser posted a 5-2-0 (W-L-D) record, falling just shy of the postseason.

The Rapids made several moves ahead of 2020, trading for Auston Trusty and permanently acquiring Lalas Abubakar. The club also brought in Drew Moor, a 2010 MLS Cup champion with Colorado, as well as goalkeeper William Yarbrough, midfielder Nicolas Benezet and Designated Player Younes Namli. The Rapids started 2020 with two wins before MLS paused its season in early March due to COVID-19. Colorado was placed in Group D of the MLS is Back Tournament with Real Salt Lake, Sporting Kansas City, and Minnesota United FC. The MLS regular season restarted in August with Colorado taking three points from four games. On Sept. 12, the Rapids defeated Real Salt Lake, 5-0, marking Colorado's first-ever win at Rio Tinto Stadium and beginning a run of three wins in four, including three shutouts. After several players and team staff tested positive for COVID-19, the Rapids paused their season, eventually canceling five matches. After a full month between games, the Rapids returned to action with losses at Sporting KC and Minnesota. MLS changed the MLS Cup Playoffs qualifying format to points-per-game on Oct. 31. The Rapids then defeated defending MLS Cup champion Seattle Sounders FC, 3–1, before clinching a playoff berth with a 1–0 win at Portland Timbers on Nov. 4. Colorado closed the regular season with a 2–1 win at Houston Dynamo on Nov. 8. Colorado visited Minnesota in the first round of the Audi 2020 MLS Cup Playoffs, falling 3–0. The season featured break-out performances by Rapids Homegrown defender Sam Vines and Homegrown midfielder Cole Bassett. Vines played every minute of every regular-season match, while Bassett led the team with five goals and five assists. Both were named to MLS 22 Under 22 for a second consecutive year. 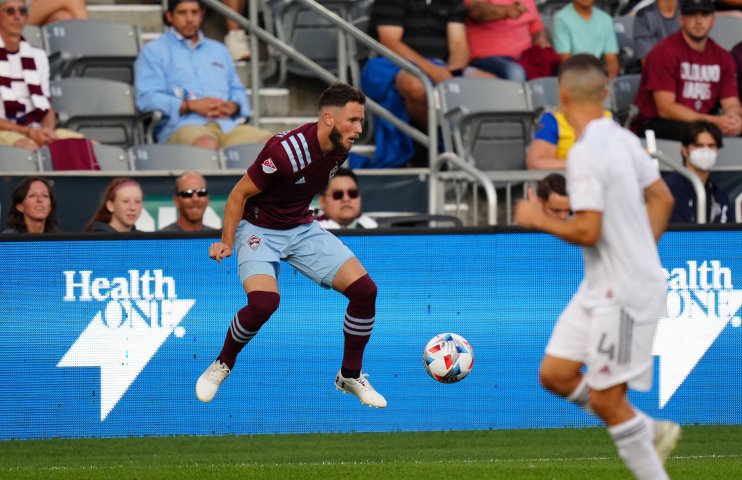 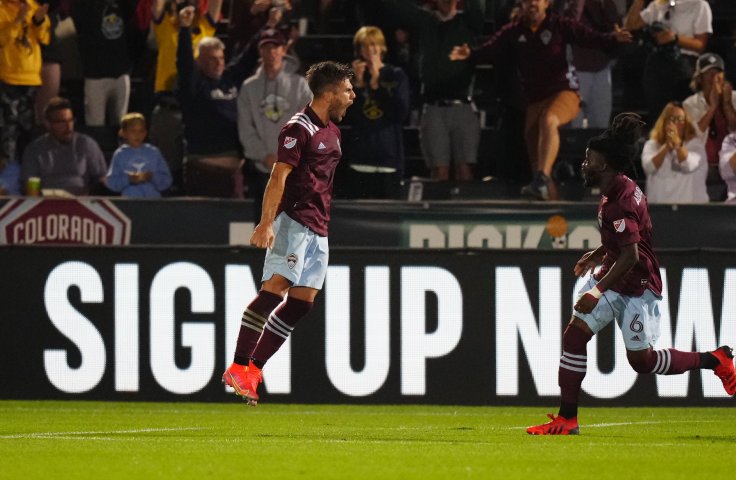 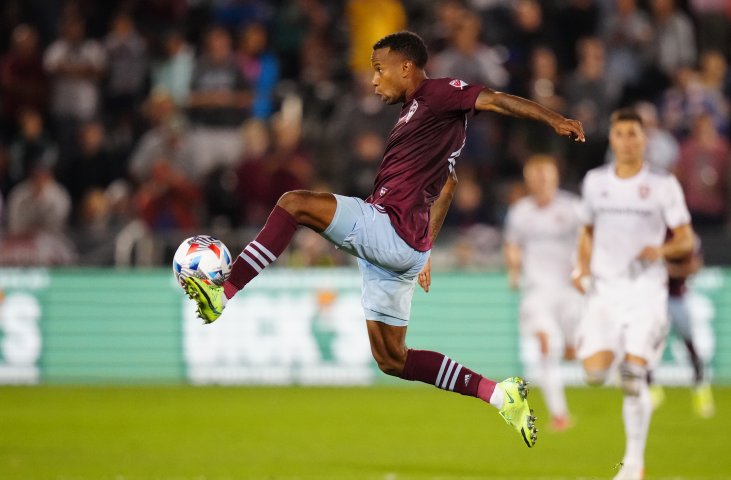 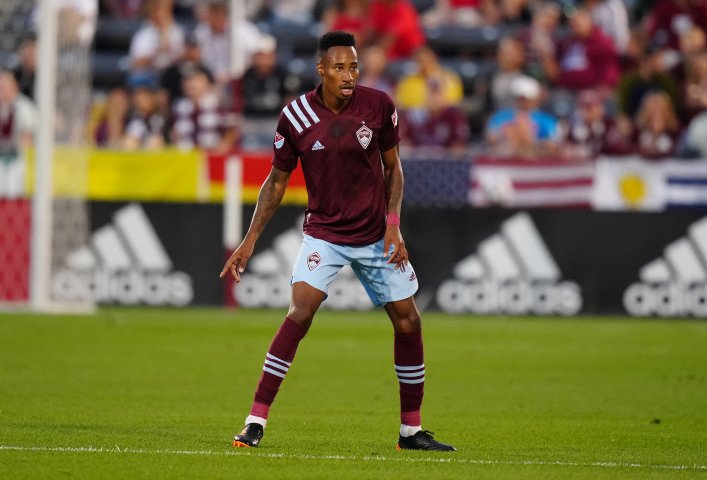 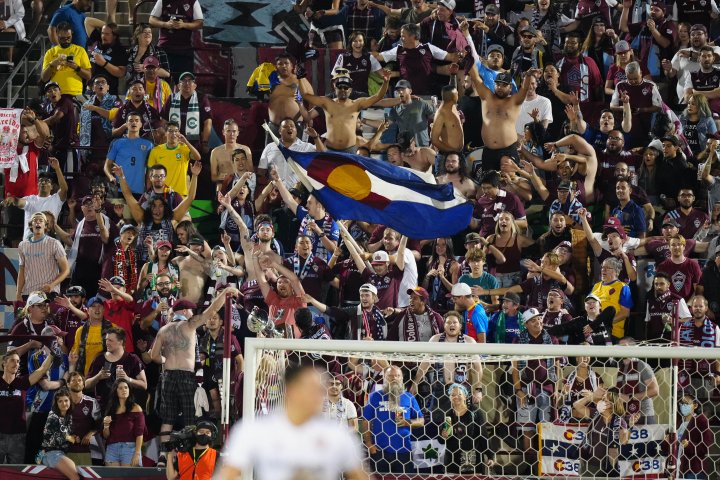 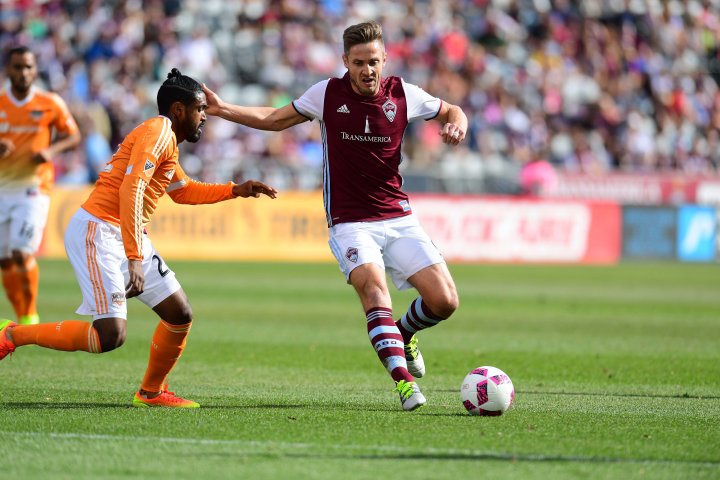 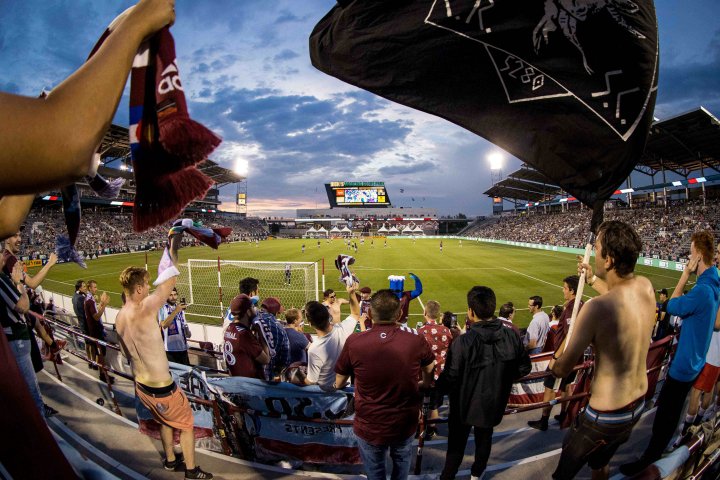 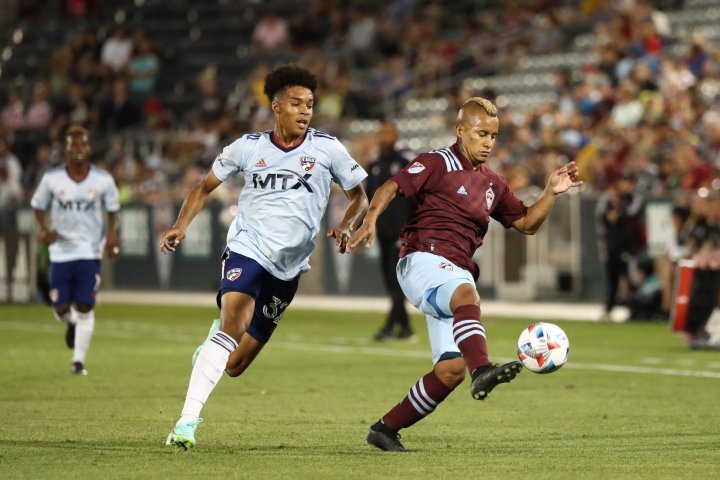 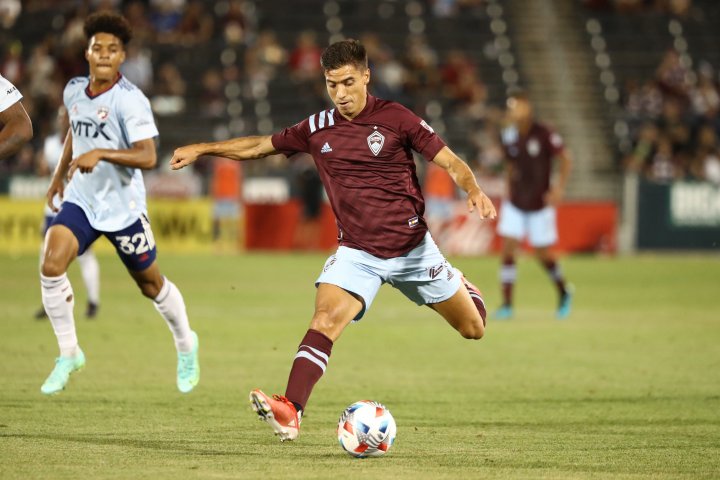 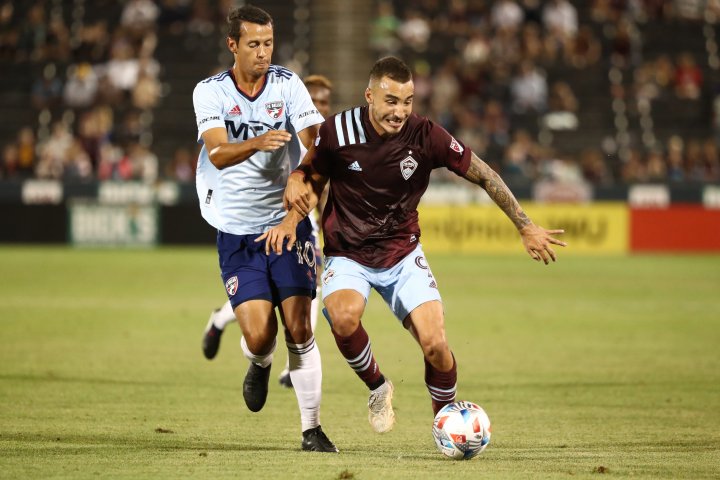 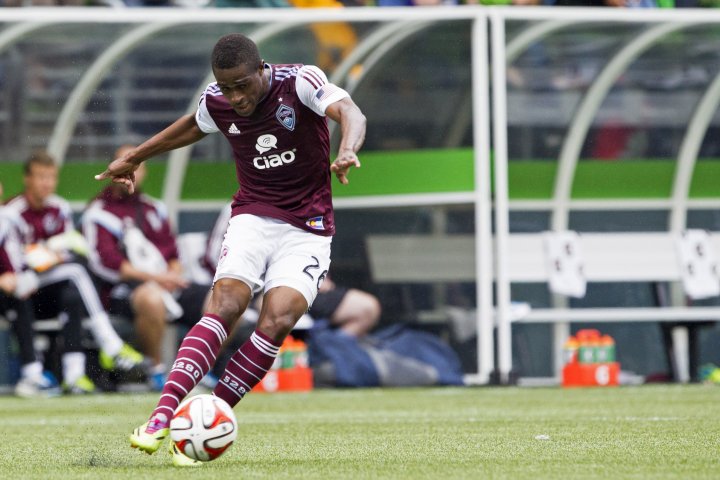 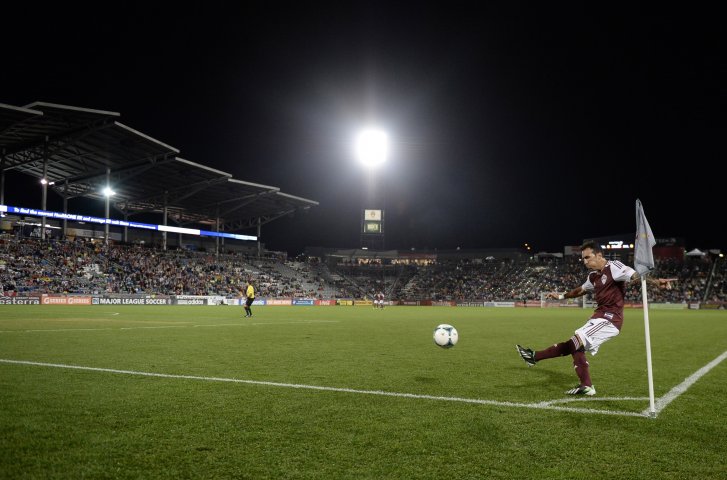 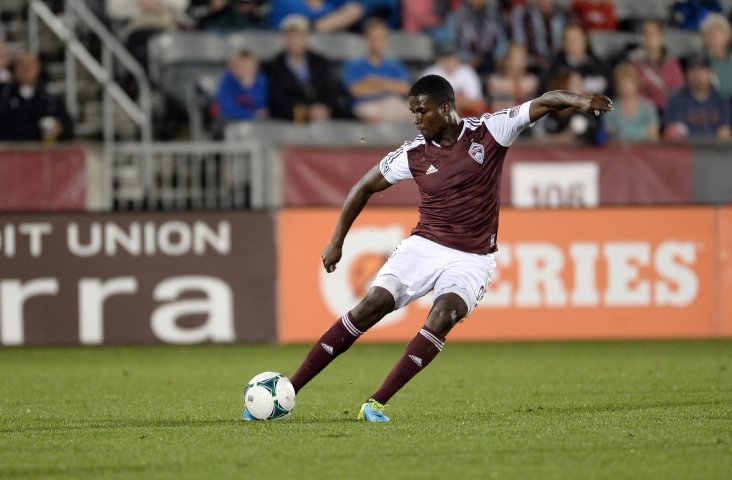 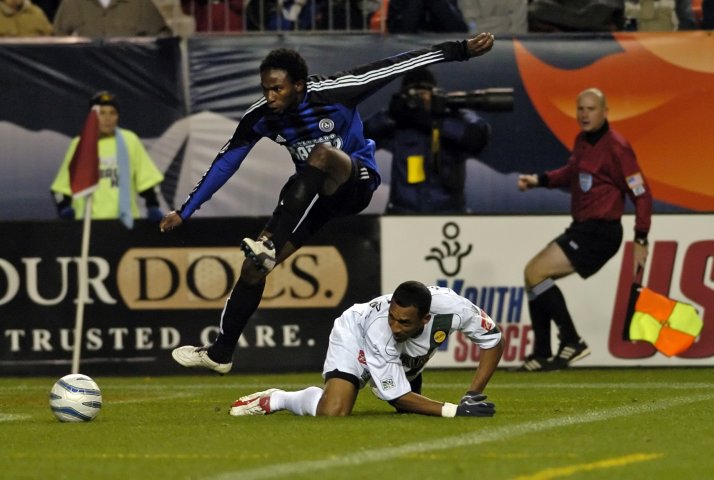 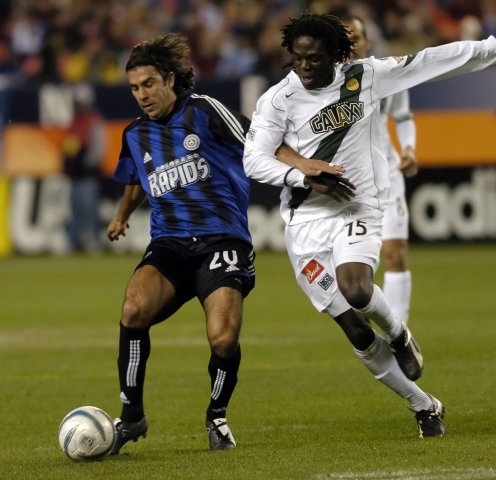 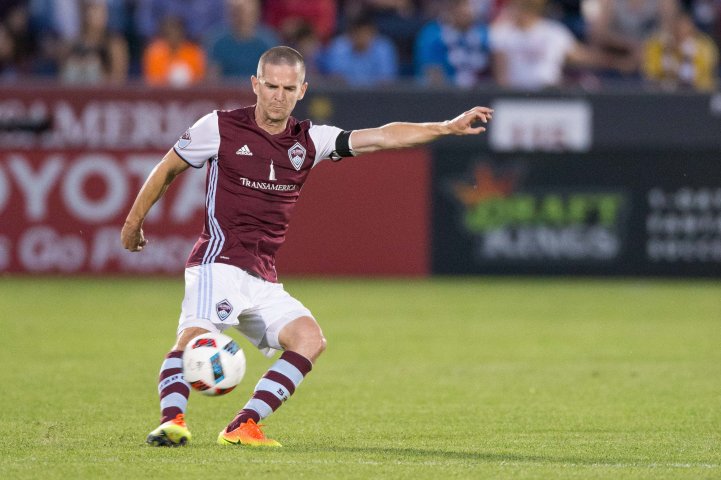 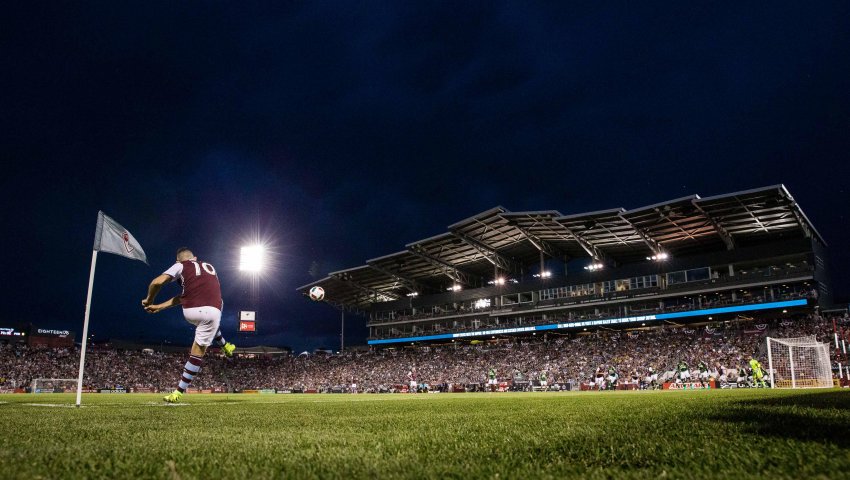 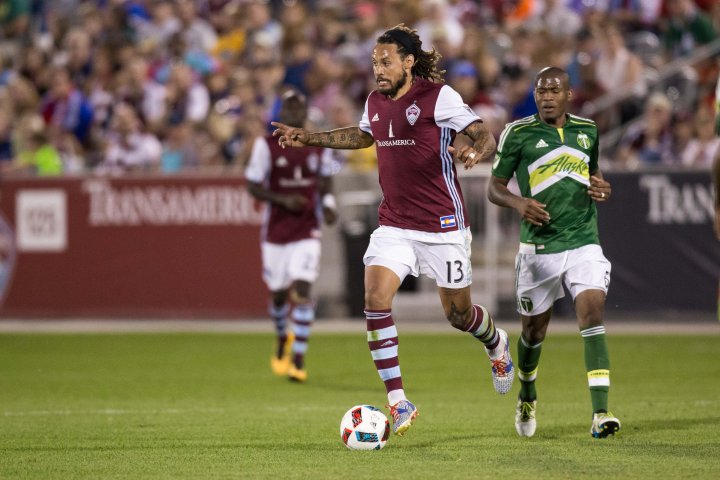 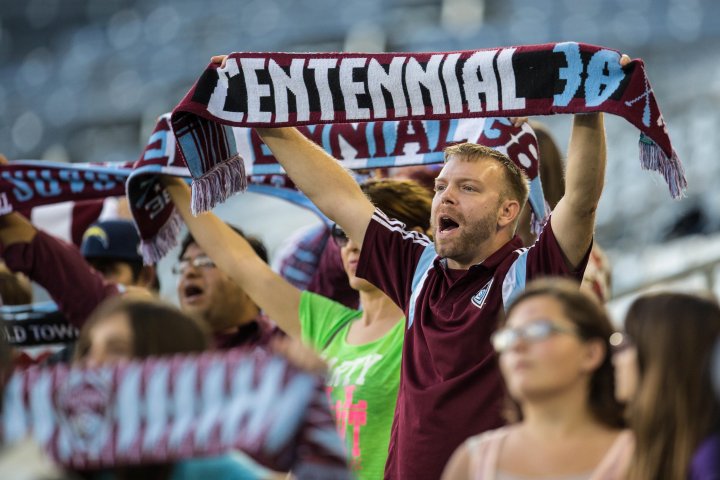 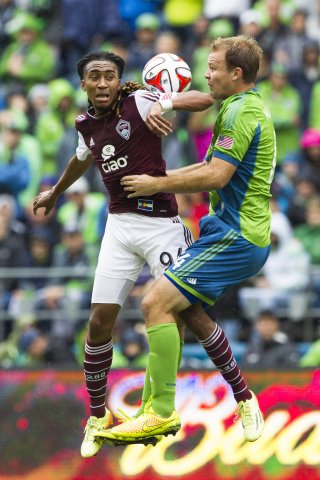 A beautiful night for some fireworks, thanks for coming out ❤️ https://t.co/3IoZLH4qUo

🎙 "We probably weren't as sharp in the attacking end as we needed to be and at the end of the day it became a real dog fight." Full postgame press conference from Robin Fraser:

"We just gotta keep doing the things we're good at and push forward and not dwell on it too much." Keegan Rosenberry gave his thoughts on tonight's draw with @AltitudeTV: https://t.co/0OGMjWoF2k