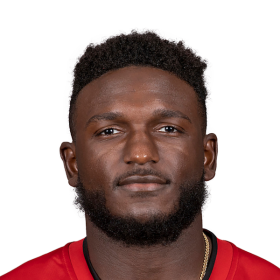 The mission of the Team Godwin Foundation is providing at-risk animals a second chance through advocacy & financial Support. Founded by Tampa Bay Buccaneers receiver Chris Godwin and his wife, Mariah, Team Godwin wants to help our community’s pets in need.

get involved
Stand Up For Pits Foundation

The Stand Up For Pits Foundation is a 501c3 non-profit dedicated to saving lives and ending the abuse and discrimination of Pit Bull “type” dogs (Pibbles) through live events, funds, education and advocacy. We don’t limit the way we advocate or save lives. We believe in new ways, new thinking and new change, and are committed to empowering others to do the same until abuse and discrimination against our beautiful Pit Bull type dogs ends. The Stand Up For Pits Foundation supports Pit Bull “type” dog rescues around the country by raising funds, providing publicity opportunities and Pibble adoptions at the Stand Up For Pits live events (to read just some of the Foundation success stories go to www.standupforpits.us/sufp-success-stories). The Foundation donates to and supports educational programs and front line rescue efforts. We advocate, educate and save lives and we will continue to focus our efforts to end dog fighting, abuse and discrimination.

get involved
Athletes and Causes

Our mission is supporting the philanthropic efforts of athletes, artists, and influencers that protect, educate, mentor, and instill hope. Our team has helped hundreds of philanthropists craft their giving funds into charitable causes.

The official #BlackLivesMatter Global Network builds power to bring justice, healing, and freedom to Black people across the globe.

In his early years, Godwin attended Middletown High School in Middletown, Delaware, where he played high school football for the Cavaliers. He had more than 700 yards every year of his high school career and as a senior had 1,150 yards and 16 receiving touchdowns. Godwin ac...

In his early years, Godwin attended Middletown High School in Middletown, Delaware, where he played high school football for...

In his early years, Godwin attended Middletown High School in Middletown, Delaware, where he played high school football for the Cavaliers. He had more than 700 yards every year of his high school career and as a senior had 1,150 yards and 16 receiving touchdowns. Godwin achieved many records in his high school years, such as Delaware Gatorade Player of the Year as a senior, he was selected to play in 2013 Under Armor All-American Game. As a sophomore, he was named All-state, while as a junior and senior a four-time All-conference wide receiver and kick returner. H was rated a four-star prospect by all four major recruiting services and was named the top player in Delaware by ESPN, Rivals.com, and 247Sports.com and was among the top 30 players nationally at wide receiver, receiving the distinction from ESPN, Rivals.com, and 247Sports.com.

In Godwin's freshman year as a college football player, he appeared in all 13 games for the Nittany Lions, recording 338 yards on 26 receptions. During his sophomore campaign, he was the leading wide receiver racking up 1,101 yards and five touchdowns. In his final game as a Nittany Lion,  Godwin recorded a career-high 187-yards, nine catches, and scored two touchdowns in the Rose Bowl against USC. He then entered the 2017 NFL Draft.

In March 2017, Godwin showed out at the 2017 NFL Combine, having one of the top vertical jumps and 40 yard dash time among wide receivers. Due to his performance in the NFL Combine, Godwin made a lot of interest in many teams such as the Philadephia Eagles, Chicago Bears, Tampa Bay Buccaneers, San Fransisco 49ers, and others. Godwin was selected by the Tampa Bay Buccaneers in the third round of the 2017 NFL Draft. He made his first 3 career receptions in week 3 against the Minnesota Vikings. In the 2017 season-finale, Godwin caught nine passes for 111 yards and one touchdown in a 31-24 win against division rival New Orleans Saints, earning him NFC Offensive Player of the Week. Godwin started the 2018 season off strong with a receiving touchdown in the first three games of the season against the New Orleans Saints, Philadelphia Eagles, and Pittsburgh Steelers. He finished the 2018 season with 59 receptions, 842 yards, and 7 touchdowns.

In the Wild Card Round of the 2020–21 NFL playoffs against the Washington Football Team, Godwin recorded five catches for 79 yards and his first playoff touchdown during the 31–23 win. In the NFC Championship game against the Green Bay Packers, Godwin recorded five catches for 110 yards as the Buccaneers defeated the Packers 31–26 to advance to Super Bowl LV, where Tampa Bay defeated the Kansas City Chiefs 31–9 to give Godwin his first Super Bowl ring.

In March of 2022, he signed a three-year extension with the Tampa Bay Buccaneers. 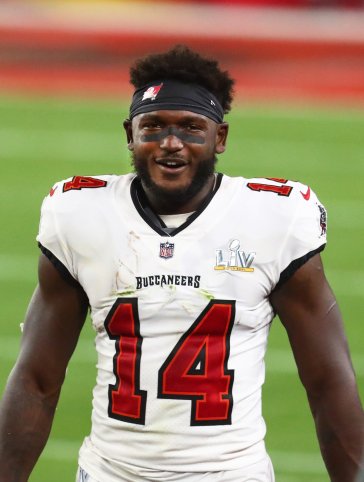 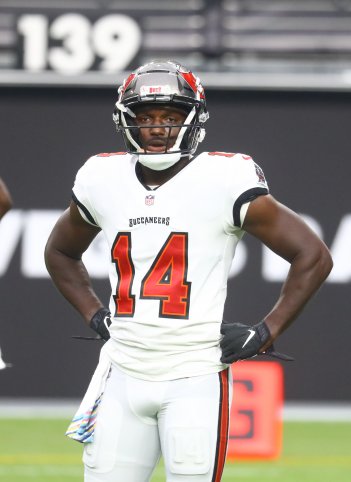 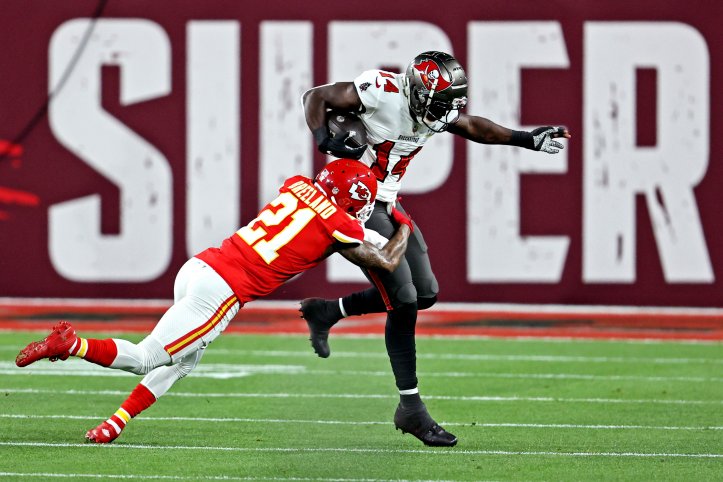 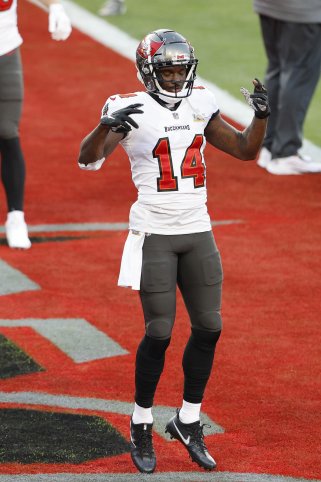 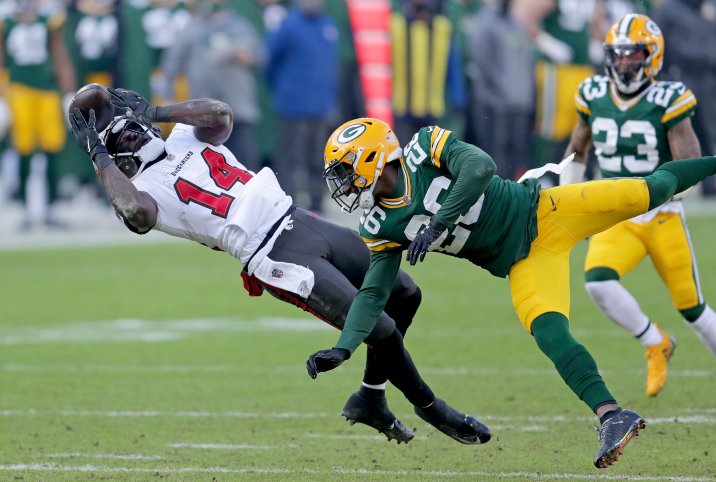 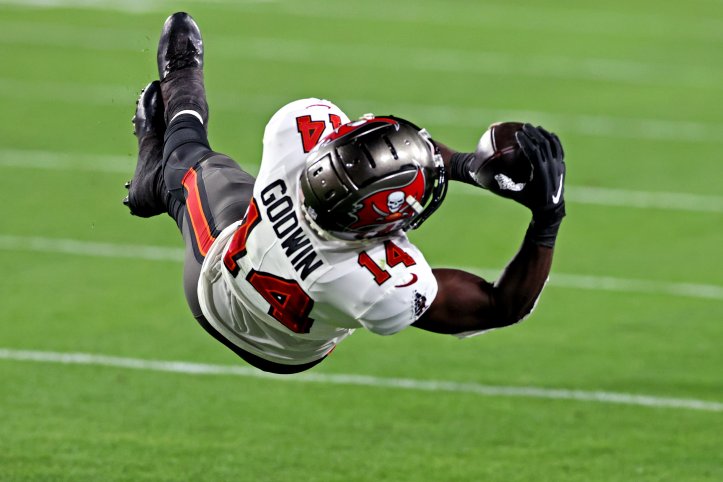 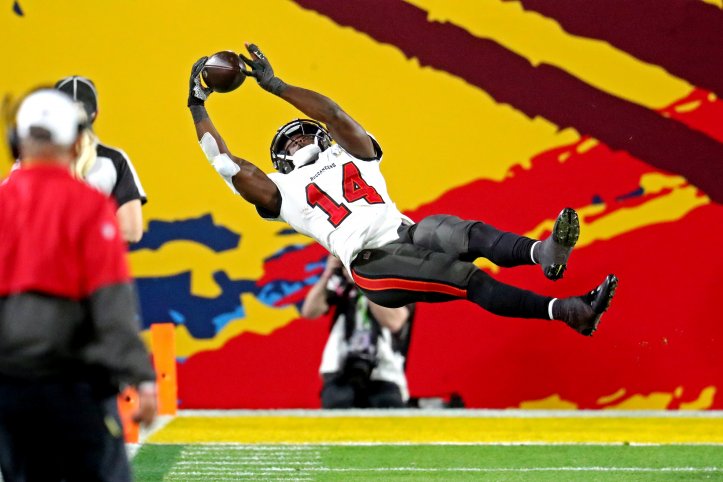 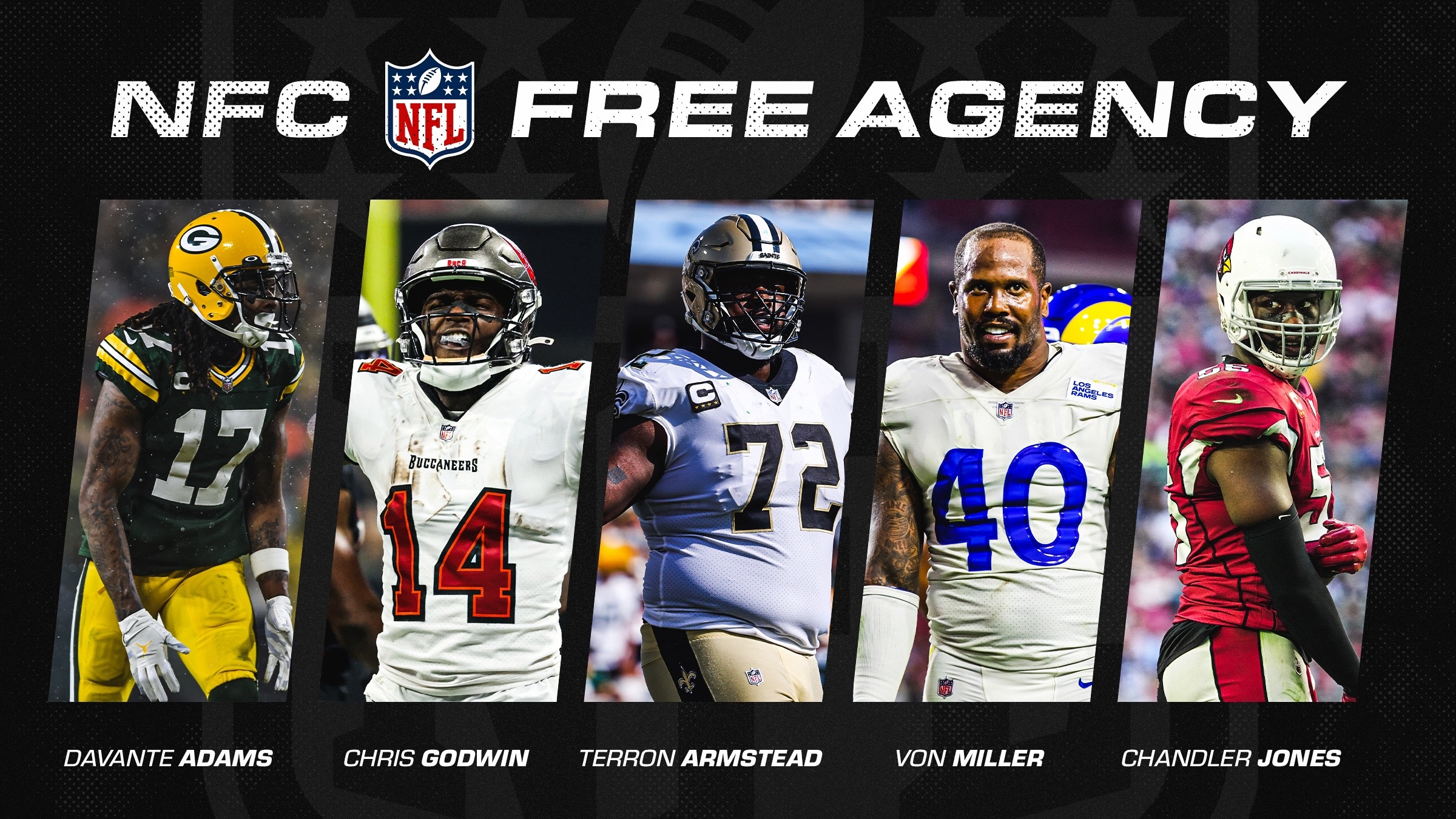 The name game when it comes to NFC free agents

The name game when it comes to NFC free agents