By Cameron DaSilva | Posted 7 months ago 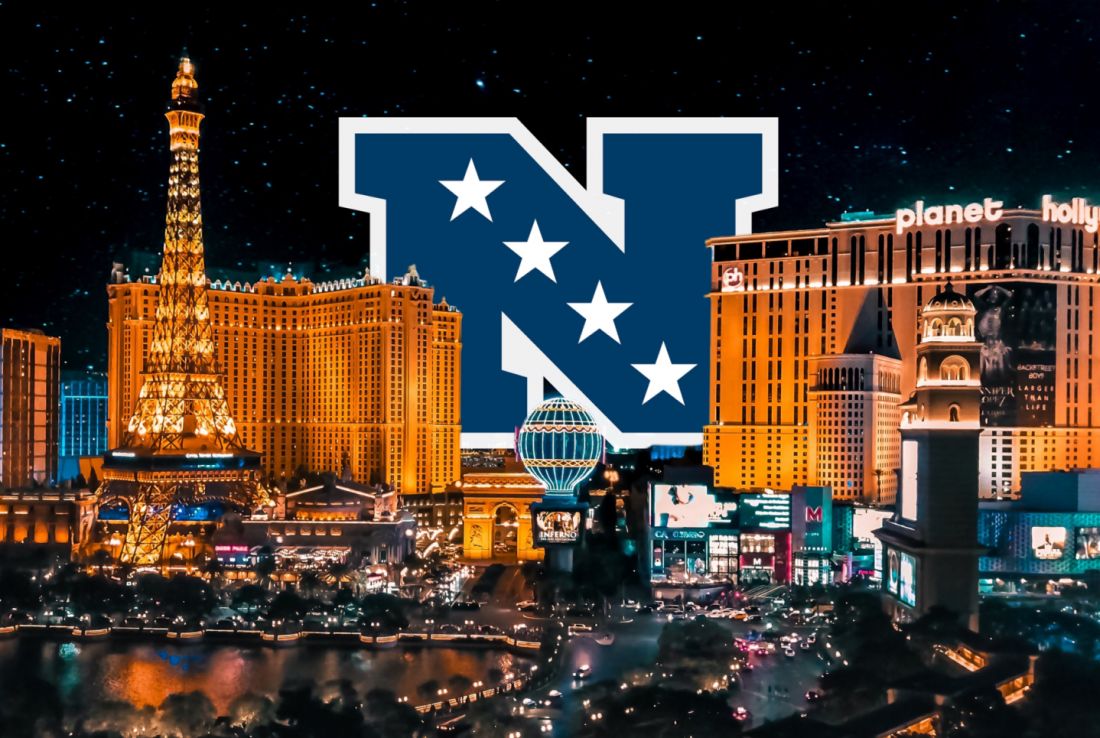 Both the NFC and AFC are equipped with legitimate Super Bowl contenders heading into the 2021 season. Where the AFC has the Chiefs, the NFC boasts the Buccaneers. The Bills look poised to make a run at a championship, but so do the Packers and Rams.

Specifically in the NFC, there are a number of teams that have a chance to be the last squad standing – led by the defending Super Bowl champions. Using DraftKings Sportsbooks’ projected win totals for 2021, I went team by team and predicted whether each will win more or less than the consensus.

The Cardinals are built to win now after adding A.J. Green, J.J. Watt, Rodney Hudson, Malcolm Butler and Rondale Moore, as well as first-round pick Zaven Collins. Their schedule is grueling, however, as a member of the loaded NFC West. On paper, the Cardinals look as talented and dangerous as any team in the NFL – so long as Kyler Murray can continue to develop into the star he’s expected to become. I like the Cardinals to win OVER 8 games.

Atlanta went all-in on giving Matt Ryan more weapons by taking the freakishly athletic tight end Kyle Pitts fourth overall in the draft. An offense that features Ryan, Julio Jones, Calvin Ridley and now Pitts is good enough to compete with any team in the NFL, but there are still major question marks on defense. They’re fortunate to be playing in a division that’s top-heavy with the Buccaneers, but the Saints and Panthers have issues of their own. I’ll take the UNDER with Atlanta.

Sam Darnold gets a fresh start in Carolina after coming over in a trade with the Jets, and this is the best supporting cast he’s had. He has D.J. Moore, Terrace Marshall Jr. and Robby Anderson at wideout, with Christian McCaffrey behind him in the backfield. The defense has plenty of young talent to work with, but I’m just not sold on Darnold as someone who will lead the Panthers to a winning record. I’m going with the UNDER.

Whether it’s Andy Dalton or Justin Fields at quarterback for the Bears, they’re not likely to make much noise. The pieces are there for Chicago to have success thanks to Allen Robinson, Khalil Mack and Akiem Hicks, but I’m just not confident enough in their quarterback options to commit to them winning eight or nine games this season. They’ll be better in 2022 when Fields has found his footing and gotten acclimated to the NFL. Give me the UNDER.

The Cowboys took some steps toward fixing their defense, adding Micah Parsons, Damontae Kazee, Keanu Neal, Kelvin Joseph and Osa Odighizuwa in the draft and free agency. But the biggest addition was Dak Prescott, who’s returning from a severe ankle injury that forced him to miss most of the 2020 season. If Prescott, Ezekiel Elliott and the Cowboys’ talented trio of receivers (Amari Cooper, Michael Gallup and CeeDee Lamb) stay healthy, they’ll be a team to take seriously. The health of the offensive line is also critical. I’ll take the OVER.

The Lions roster’ has become barren with talent, especially after losing Kenny Golladay and Marvin Jones in free agency. They also set their rebuild in motion by trading Matthew Stafford to the Rams for Jared Goff and draft picks. Dan Campbell has his work cut out for him in his first year as a head coach, but I think he’ll lead Detroit to at least six wins with Goff at quarterback. Just don’t expect the Lions to contend for the NFC North crown or make the playoffs because they’re at least a few years away. I think they’ll win OVER 5 games.

The Packers’ projected win total is currently off the board because of Aaron Rodgers’ uncertain future. He wants out of Green Bay and the front office is unwilling to trade him, which has created a standoff. If he stays with the Packers and returns for another year, I think they’ll win at least 12 games. But if Rodgers sits out the season or is traded, their win total could be in the range of 8-9 games.

The Rams went 10-6 last season with Goff at quarterback and the No. 1 defense in the NFL. This year, the defense might regress a bit following some major departures in free agency, but the offense will look more like the 2018 team that made the Super Bowl than last year’s version thanks to the arrival of Stafford. Their schedule features the Packers, Bucs and Titans outside the NFC West, but the Rams are going to contend for a ring this year. Give me the OVER.

A great running game? Check. An elite wide receiver tandem? Check. A decent quarterback? Check. So why am I hesitant to take the over on the Vikings’ win total? Their offensive line is questionable and the defense is likely to give up a lot of yards again in 2021 after finishing 27th in yards allowed a year ago. I think the Vikings will win 8-9 games this year, but getting over the hump and winning 10 might be difficult. For that reason, I'm taking the UNDER with Minnesota. The Vikings are one Dalvin Cook injury away from going 6-11.

Drew Brees retired this offseason and Jameis Winston is likely to step in as the Saints’ starting quarterback. I’m not going to pretend Brees was playing at an All-Pro level last year, but he operated New Orleans’ offense to perfection with his quick, short passes and pinpoint accuracy. That will have to change with Winston and his gun-slinging mentality. I think Winston will be capable of leading the offense and putting up points in bunches, but much of their season will come down to the health of Alvin Kamara, Michael Thomas and Terron Armstead. I like the OVER.

Daniel Jones should have no excuses for playing poorly this year. Dave Gettleman and the Giants’ front office have surrounded him with an abundance of talent: Golladay, Kadarius Toney, John Ross, Darius Slayton, Evan Engram and Saquon Barkley. The offensive line still looks like a weakness, and there are questions on defense, but the Giants’ success will come down to how Jones plays. If continues to lack accuracy and commits careless turnovers, New York will go nowhere once again. I’m not sold on Jones, so I'm going UNDER.

I'm just going to get this out of the way right now: I’m not high on the Eagles. I like Jalen Hurts’ potential, but Nick Sirianni is a first-time head coach and I have my doubts about his ability to take the Eagles far. The receiving corps is young and inexperienced, while the secondary looks like a major weakness. There are just too many holes for me to feel good about them as a contender, but I do think the total of 6.5 is too low. I’ll take the OVER – barely.

Was the 49ers’ 13-3 record in 2019 an outlier among five other sub-.500 seasons since 2015? Or did the 49ers just have bad injury luck last year, leading to a 6-10 finish? I think they’ll land somewhere between those seasons in 2021, but I feel more confident in them winning nine or 10 games than I do 11-plus. Jimmy Garoppolo is injury-prone and limited, while Trey Lance is a raw quarterback who needs time to develop. Either way, the 49ers are going to rely heavily on their running game and defense. I’m taking the UNDER.

Since Russell Wilson took over as the starting quarterback in 2012, the Seahawks have won at least 10 games in eight of his nine seasons. With a 17-game season, it’s a good bet that Seattle will once again win double-digit games so long as Wilson stays healthy – which he always does. The defense has been a weakness in the last two or three years, but Wilson is more than capable of putting the team on his back and carrying Seattle once again. This is a high-powered offense that can score 30 points a game. Give me the OVER

Expectations are predictably high for the Bucs in 2021 after they won the Super Bowl in Tom Brady’s first season under center. And considering they return all 22 of their starters from a season ago, it’s easy to see why they’re one of the favorites to win it all again. The Bucs could finish the regular season better than they did a year ago after finding a rhythm in the second half of the year. Add in the fact that they play in a fairly favorable division and winning 14 of their 17 games isn't out of the question. I’ll take the OVER with the Buccaneers in 2021.

Washington is somewhat of a sleeper in the NFC. The defense has a legitimate chance to be one of the three or four best in the NFL, while the offense features playmakers such as Antonio Gibson, Terry McLaurin, Curtis Samuel, Logan Thomas and Antonio Gandy-Golden. The real strength is on defense, though, with Chase Young, Montez Sweat, Jonathan Allen, Daron Payne, Kendall Fuller and now Jamin Davis. There are massive questions at quarterback, especially long-term, with Ryan Fitzpatrick projected to start, but if he can cut down on the turnovers and simply get the ball into the hands of his playmakers, Washington will contend in the East. Give me the OVER.

Check back tomorrow for the AFC.