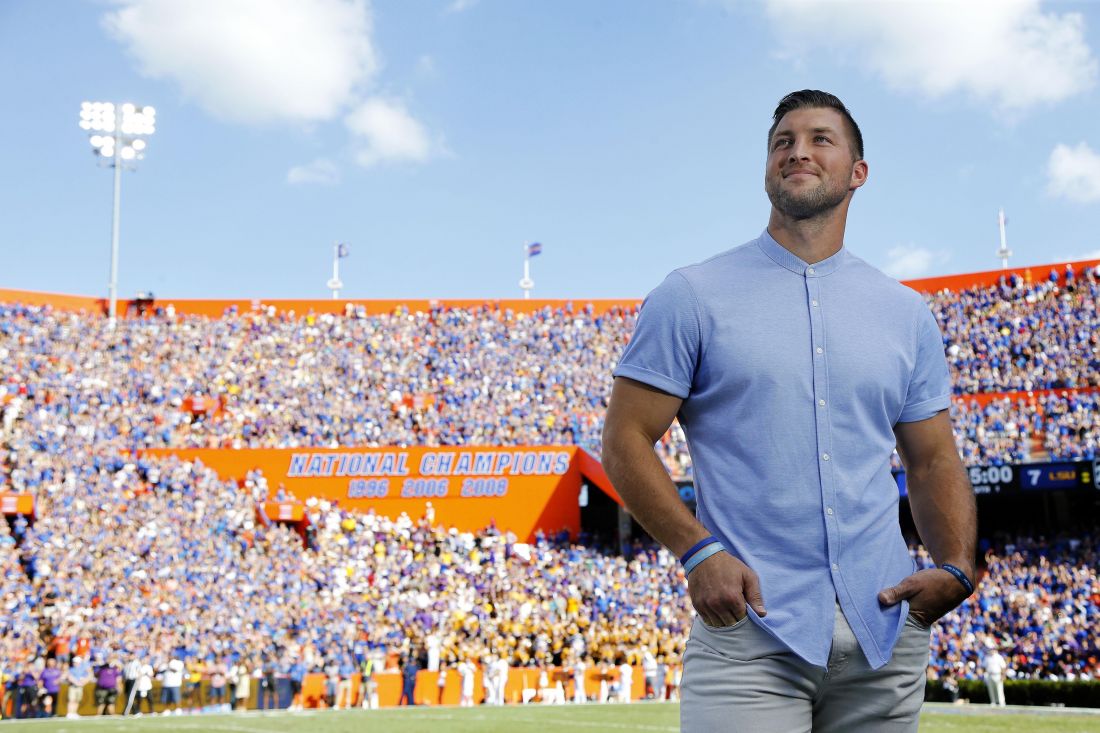 December 30, 2012. That’s the last time Tim Tebow appeared in an NFL game. He played one offensive snap for the Jets that afternoon, a 28-9 loss by New York at the hands of the Buffalo Bills in Week 17.

It capped off a difficult season for Tebow after starting 13 total games for the Denver Broncos one year prior in 2011, leading them to that remarkable playoff victory over the Steelers in the wild-card round. But his time as a starting quarterback was short-lived, transitioning to more of a wildcat role for the Jets in 2012 – his last-ditch effort to stick around in the NFL.

Only, that wasn’t his final chance to play professional football. He’s getting another shot with the Jacksonville Jaguars in 2021.

Tebow is expected to sign a one-year deal with the Jaguars, but not to compete with No. 1 overall pick Trevor Lawrence. He’s planning to play tight end, a position he hasn’t played full-time since high school.

At 33 years old and being out of the NFL since 2015, it seems like a ludicrous proposition. But his college coach Urban Meyer, who now coaches the Jaguars, sees something in Tebow that warrants giving the NFL quarterback-turned-minor league baseball player another chance to prove he brings value to the team.

And given the state the team’s tight end room, they don’t exactly have a proven stud who’s a lock to start. Currently, the Jaguars have Chris Manhertz, Luke Farrell, Tyler Davis, James O’Shaughnessy and Ben Ellefson at tight end. If nothing else, Tebow is a name that stands out – someone fans will recognize in training camp.

Tebow isn't going to be handed a spot on the 53-man roster. He won’t be given a practice squad job. He’ll have to prove he can legitimately contribute in the NFL again as a receiver, which there is no evidence of to this point.

But Meyer put Tebow through a workout, and he and the coaching staff must’ve seen something that warranted giving him a chance this summer over bringing in someone who has played tight end before. Whether Meyer’s hope for his college quarterback turns out to be nothing more than a glimmer remains to be seen, but Tebow deserves credit for giving it another go in the NFL.

Sure, many will argue that he should’ve transitioned from quarterback to tight end nine years ago when it became evident that he wouldn’t stick around as a professional passer. And in all honesty, he should have. But he has nothing to lose by attempting one last comeback as a tight end.

It’s something he and Meyer talked about before when Tebow was still in the NFL as a quarterback.

“Tim and I’ve talked about, when he was a quarterback in the NFL that was a big topic,” Meyer told reporters after the draft, via ProFootballTalk. “I was so busy, I didn’t give him the time. ‘What do you think? What do you think?’ and I didn’t know, I was too busy to even think it through. I know playing a position in the National Football League without — that’s a long shot, this is years ago. How did it happen this time? We had a conversation. He worked out with our tight ends coach, I stopped by, did not stay for the whole workout. Then our focus went to the NFL draft. We’re going to revisit here in the near future. That’s how that all happened.”

He’s plenty athletic for the position, despite not being as fast as Taysom Hill. He’s a smart player who, as a former quarterback, understands route concepts. He’s also a proven leader from his days at Florida and then with the Broncos.

At best, Tebow actually makes the team and contributes as a receiver. At worst, he flames out again and goes back to doing TV. He’s a former Heisman Trophy winner, a beloved figure in Florida and has a playoff win to his name.

Tebow might not be the most successful quarterback, but he’s accomplished plenty during his career, both in college and the pros. He’ll bring excitement to the table among local fans when the Jaguars open training camp later this summer.

Assuming fans are able to attend, they’ll likely come out in droves to see the former Florida Gator try his hand at catching passes and blocking NFL pass rushers. The Jaguars shouldn’t need Tebow in order to sell tickets, given the excitement that’s already surrounding the team thanks to the selection of Lawrence and hiring of Meyer, but an additional storyline for the summer wouldn’t hurt.

But what isn't getting much attention with this reunion of Tebow and Meyer is the potential coaching implications it could have down the line. Might this be a way for Tebow to get his foot in the door as a future assistant coach on Meyer’s staff?

In that same interview, he said, “Coach Meyer is like a father figure.” There’s a clear connection between the two and this might be a way for them to open the door for Tebow to give coaching a shot in the future.

There is some risk that comes with this move for Meyer, bringing more attention to a Jaguars team that still has a ton to prove. But for Tebow, he has nothing to lose. There’s no pressure on him to turn this into a legitimate role as a tight end.

If it works out, great. If not, he can turn his focus toward being an analyst, or in politics, or as a philanthropist who just wants to help people any way he can. He’s already started the Tim Tebow Foundation, which is a non-profit organization aimed at stopping human trafficking and helping those in need.

We shouldn’t be criticizing Tebow for giving tight end a shot. He shouldn’t be the target in the eye of the public here. He’s simply trying to prove that even at 33 years old, there’s some gas left in the tank.