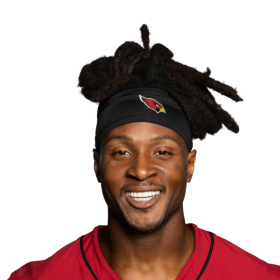 We believe every kid has what it takes. The mission and core beliefs of Boys & Girls Clubs fuel our commitment to promoting safe, positive and inclusive environments for all. Boys & Girls Clubs of America supports all youth and teens – of every race, ethnicity, gender, gender expression, sexual orientation, ability, socio-economic status, and religion – in reaching their full potential.

get involved
Involved in 5 charities
S.M.O.O.T.H.

S.M.O.O.O.T.H. is a non-profit organization that leads the way to empower women affected by the perils of domestic violence. We believe that those overcoming abuses are unique and deserve a multi-pronged approach when being engaged. We connect Survivors to reputable community resources (Counseling, Internships, Personal + Mental Health, Legal) and provide our Butterflies with emotional and financial assistance.Deandre Hopkins holds a SMOOOTH Back-to-school giveaway that supplies book bags and school supplies for over 2,500 children. SMOOOTH is an acronym that stand for Speaking Mentally Outwardly Opening Opportunities Towards Healing

It all began as a fundraiser for Laura Ward’s own children’s school – five bucks a head for a spaghetti dinner in the high school gym of a private Christian school. Over forty-million dollars and thirty years later, her drive to help children in need ranks her among the top Executive Directors of children’s charities. For the past 24 years, through an array of capital and operating support, HCC has provided program services for over 300 agencies and more than 3,500,000 children. In addition, the Becker Emergency Fund has provided over $100,000 to assist families in an emergency crisis situation. Through our “Chariots for Children,” we provide special purpose vehicles used to deliver mobility freedom not otherwise available. This program is dedicated to providing specifically designed handicapped accessible vans to families and equipped transportation to organizations with a similar mission. HCC has awarded 90 passenger vans, 74 handicapped accessible vehicles, 3 box trucks, 1 car and 2 vehicle modifications to 94 agencies and 73 individual families.

AVDA's (Aid to Victims of Domestic Abuse, Inc.) mission is to promote violence-free relationships and social change by offering alternative choices to end violence and domestic abuse. For more than 35 years, our mission and services have provided critical support to thousands in our area. For the many individuals that need our help, AVDA provides a Community of Hope through our state-certified domestic violence center that offers a comprehensive array of services for all victims of domestic violence including; a 24 hour crisis hotline, emergency and transitional housing, advocacy, counseling and support to help them live violence-free and self-sufficient lives. We also work throughout the community to educate and engage people of all ages in our commitment to prevent violence.

get involved
We Run As One

The Dynasty Project (TDP) creates innovative programs that enrich local APIA communities through athletics, and the pursuit of athletic endeavors.

Hopkins attended D.W. Daniel High School where he played football, basketball and ran track. In football as a receiver, Hopkins recorded 57 receptions for 1,266 yards and 18 touchdowns on offense and 28 interceptions, returning five for touchdowns on defense. He also returned 11 punts for 2...

Hopkins attended D.W. Daniel High School where he played football, basketball and ran track. In football as a receiver, Hopkins recorded 57 receptions for 1,266 yards and 18 touchdowns on offense and 28 interceptions, returning five for touchdowns on defense. He also returned 11 punts for 289 yards and three touchdowns, along with two kickoff returns for 119 yards and one score as a senior. He helped lead his team to a 37-4 record over his high school career. Hopkins was rated the 12th-best receiver in the nation and the state's eighth-best overall prospect by Rivals.com. In addition to football, Hopkins was a four-year starter for his school's basketball team. He was a three-time All-State choice who tallied more than 1,300 points, 400 rebounds, 600 assists, and 200 steals in his career. Hopkins committed to Clemson on Match 8th, 2009.

Hopkins played all three years at Clemson from 2010 to 2012. He finished his freshman year as Clemson's leading receiver with 52 receptions for 637 yards and four touchdowns. In 2011 he helped lead his team to an ACC Championship. Hopkins totaled 206 receptions for more than 3,000 yards and 27 touchdowns while scoring 18 times in his final year at Clemson as a junior. He was named First Team All-ACC in 2012. On January 10th, 2013, Hopkins decided to forgo his senior season at Clemson and enter the NFL Draft.

DeAndre Hopkins was selected in the first round by the Houston Texans with the 27th overall pick in the 2013 NFL Draft. He was the second wide receiver in franchise history to be drafted in the first round, the first being Andre Johnson who was selected third overall in 2003. It was also just the second time in 10 years that the Texans selected an offensive player in the first round. He was named to the 2013 PFWA All-Rookie team in 2013. Hopkins is now widely considered one of the top receivers in the league. Hopkins is known for his acrobatic catches and unbelievable body control. He is truly a matchup nightmare for defenses and cannot be guarded one on one. He has spent every season with the Houston Texans and has logged 528 receptions for more than 7,400 yards and 47 touchdowns. Hopkins is a three-time Pro Bowl selection, two-time First-Team All-Pro, and a Second-Team All-Pro. In 2017 he led the league in touchdown receptions with 13 touchdowns. In 2018, Hopkins helped lead his team to a playoff birth as the number 3 ranked AFC Team and recorded 115 catches for 1572 yards and 11 touchdowns for the season. In 2019, DeAndre Hopkins became the third-youngest player to reach 8,000 yards receiving in a career in NFL history. He accomplished this at 27 years, 143 days of age. Only Hall of Famer Randy Moss (26 years, 297 days) and Larry Fitzgerald (27 years, 110 days) were younger when they accomplished this feat.

On March 20, 2020, the Texans traded Hopkins and a fourth-round pick in the 2020 NFL Draft to the Arizona Cardinals for running back David Johnson, a 2020 second-round pick, and a 2021 fourth-round pick. On September 8, 2020, Hopkins signed a two-year, $54.5 million contract extension with the Cardinals.

On November 19, Hopkins became the youngest player to reach 700 catches, a record that was held by his teammate, Larry Fitzgerald, during the 28–21 loss to Seattle. In Week 14 against the New York Giants, Hopkins recorded nine receptions for 136 yards during the 26–7 victory. In Week 15 against the Philadelphia Eagles, Hopkins recorded nine catches for 169 yards and a touchdown during the 33–26 win. In Week 17, against the Los Angeles Rams, Hopkins went over 10,000 receiving yards for his career. Overall, Hopkins finished the season with 115 receptions for 1,407 receiving yards and six receiving touchdowns. His 115 receptions set a new franchise mark for a single season, breaking Larry Fitzgerald's marks in 2015 and 2017.

His mother is blind and always sits in the same seat at games. Every touchdown Hopkins scores he finds her and gives her the ball. 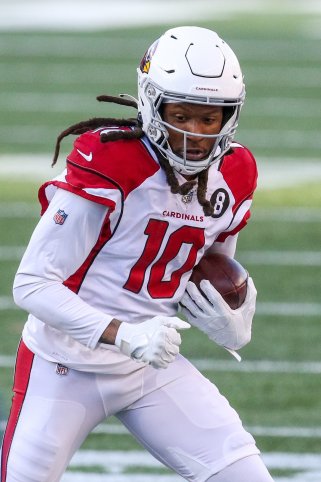 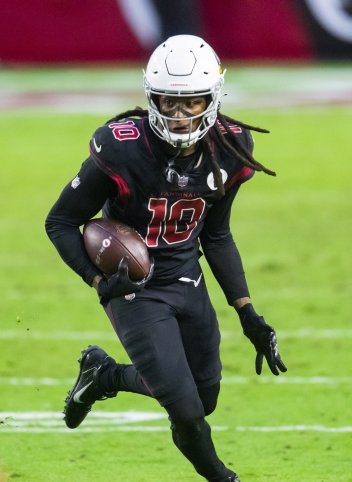 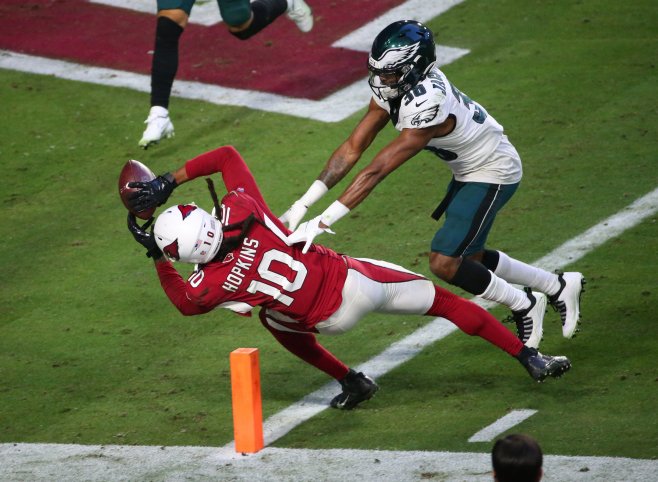 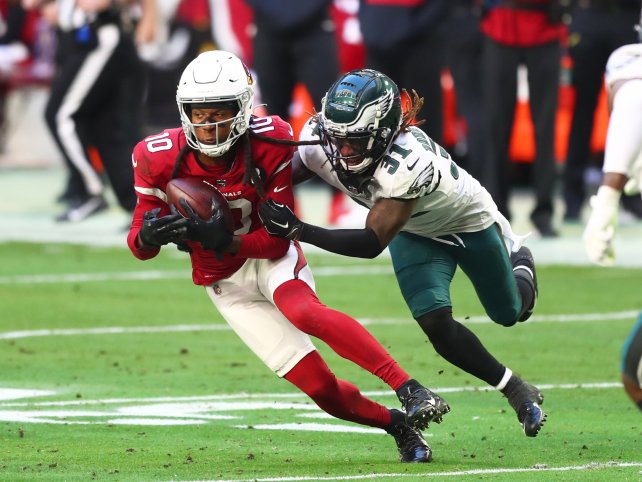 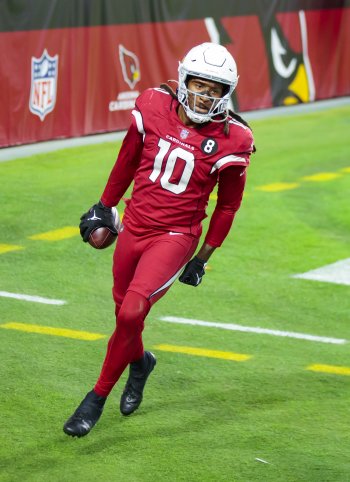 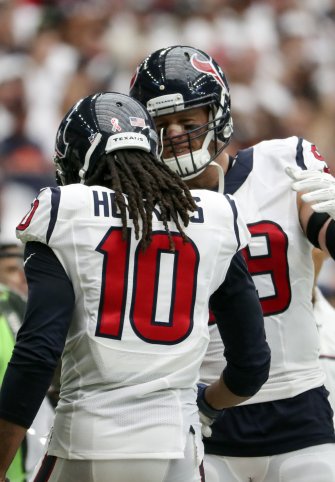 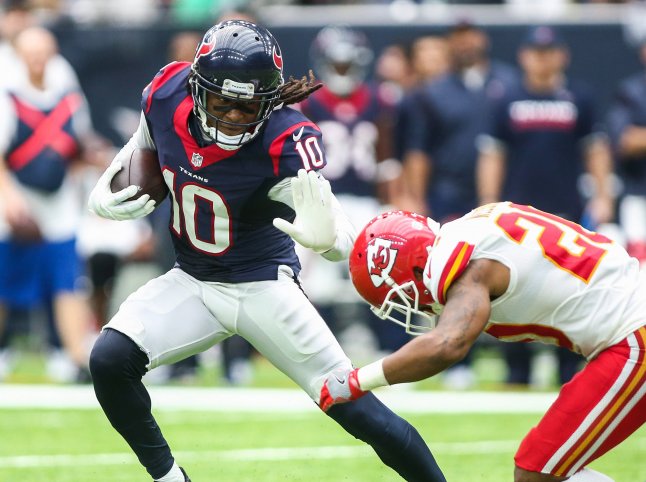 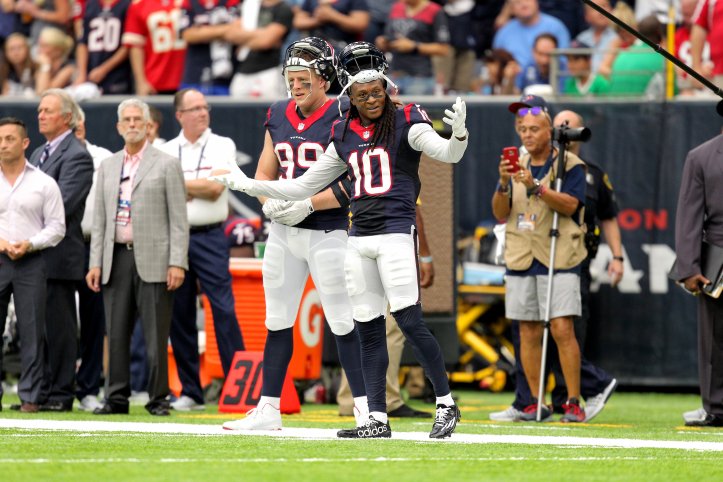 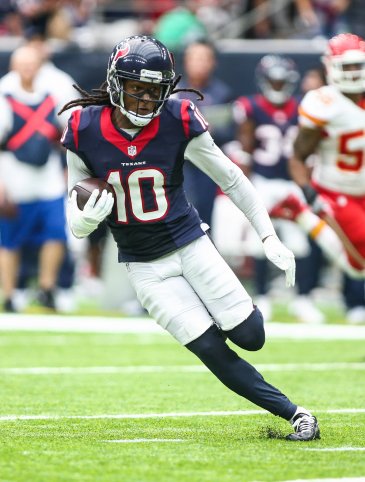 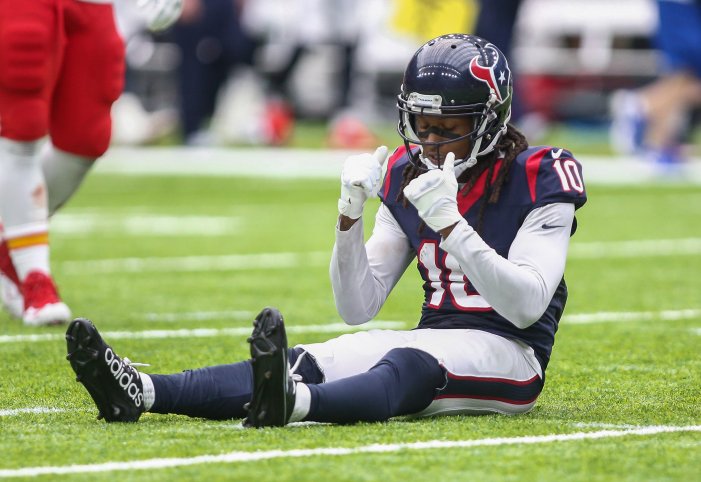 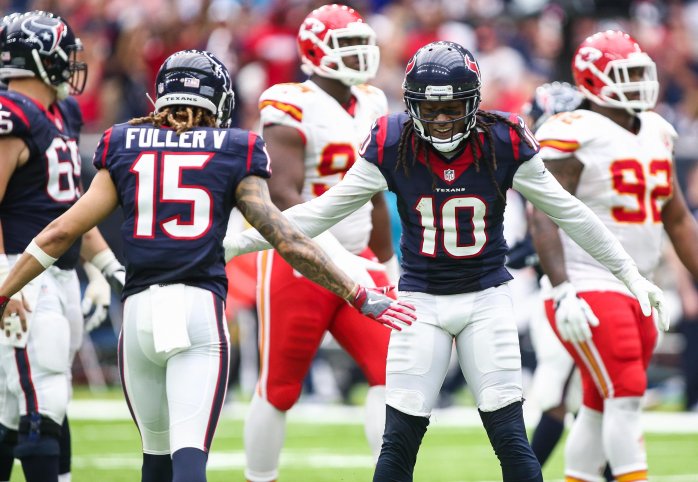 Bacanora top my list of Phoenix restaurants so far, if you in the valley I highly suggest... https://t.co/HOCw4MI4qr