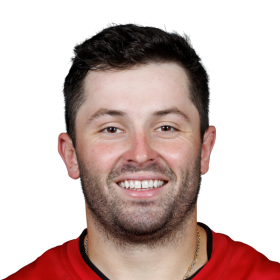 In a national media appearance on The Jim Rome Show on CBS Sports Network in Atlanta at Super Bowl LIII Wednesday, Mayfield talked about auctioning off a dinner for two, which raised $40,000 for Providence House to help at-risk families in Cleveland. With Mayfield’s help, the Browns were able to raise more than $100,000 in just 10 minutes to benefit Providence House at their annual “Deck The House” event at FirstEnergy Stadium.

Through a partnership with Barstool Sports, Mayfield will sell a collection of T-Shirts & sweatshirts featuring outlines of his signature five o'clock shadow, eye black, and bandana—with 100 percent of the proceeds to be donated to Special Olympics in the greater Cleveland area.

In his early years, Mayfield attended Lake Travis High School where as a sophomore in 2011, he  helped lead Lake Travis to an undefeated 16-0 season in 2011 on the way to a 4A State Championship, passing for 3,788 yards in first season as a starting quarterback on 247 of 378 passing with 45 touchdown...

In his early years, Mayfield attended Lake Travis High School where as a sophomore in 2011, he  helped lead Lake Travis to an undefeated 16-0 season in...

In his early years, Mayfield attended Lake Travis High School where as a sophomore in 2011, he  helped lead Lake Travis to an undefeated 16-0 season in 2011 on the way to a 4A State Championship, passing for 3,788 yards in first season as a starting quarterback on 247 of 378 passing with 45 touchdown passes and only five interceptions while as a senior, he guided his team to a 9-2 record and to a 6-0 record during district play with a District 15-5A Championship. He completed 182 of 288 passes for 2,467 yards with 22 touchdowns and just three interceptions, was named 15-5A District MVP and was named All-Centex Third Team. Mayfield finished his high school career with 6,255 yards on 429 of 666 passing with 67 touchdowns and eight interceptions.

After he finished high school, Mayfield attended his freshman year in 2013 at Texas Tech, where he played in eight games, starting 7, completing 218 of 340 passes for 2,315 yards, 12 TDs, and nine INTs. His pass completions and attempts were most by a Big 12 freshman quarterback since OU's Landry Jones in 2009 In his collegiate debut at SMU on August 30th, he threw for 413 yards on 43 of 60 passing with four TDs and added a rushing TD. He was also named Big 12 Offensive Player of the Week and earned multiple national player-of-the-week awards for his performance in the season opener. In 2014, Mayfield transferred to the University of Oklahoma where as a sophomore in 2015, he started all 12 games, making his debut against Akron on September 5th, setting a record for passing yards in a season opener with 388 on 23 of 33 passing with three touchdowns and no interceptions. At the end of the year, he was named by Sporting News Player of the Year and was the winner of Burlsworth Trophy. He was also named first-team All-American by Sporting News and Walter Camp Football Foundation, was chosen as second-team All-American by AP and FWAA, was selected as Big 12 Offensive Player of the Year and an All-Big 12 First Team honoree, was a finalist for Davey O'Brien Award, Earl Campbell Tyler Rose Award, Manning Award and Walter Camp Player of the Year Award, and was a semifinalist for Maxwell Award. As a junior in 2016, Mayfield threw for an average of 305.0 yards per game and amassed 40 touchdown passes against eight interceptions, set FBS single-season pass efficiency rating record with a 196.4 mark and also ranked first nationally in completion percentage with 70.9 and yards per pass attempt with 11.1. Mayfield also ranked second nationally in yards per completion with 15.6, fourth in points responsible for with 21.5 per game and sixth in passing TDs with 40. As a senior in 2017, Mayfield played in all 14 games with starts in 13 contests, setting a single-season OU record with four Big 12 Offensive Player of the Week awards. He led FBS in completion percentage with .705, points responsible with 296 and yards per pass attempt with 11.5, set OU single-season record for total offense with 4,938 yards and broke own FBS single-season record for passing efficiency rating with 198.9. He also set OU single-season record for total offense with 4,938 yards and finished second in school-single season history in completion percentage and touchdown passes with 43 while ranking third in passing yards with 4,627. Mayfield finished his college career ranking second in FBS history in passing efficiency rating with 175.4, third in yards per attempt with 9.7, tied for fourth in touchdown passes with 131, fifth in total offense with 15,690 yards and seventh in passing yards with 14,607.

After he graduated from college, Mayfield entered the 2018 NFL Draft where he was the first overall pick in the draft made by the Cleveland Browns. He signed a four-year rookie contract with the Browns on July 24th and made his NFL debut on September 20th against the New York Jets where he entered the game in the second quarter and helped team erase 14-0 deficit, leading scoring drives on four of six full offensive series. In his first NFL start at the Oakland Raiders on September 30th, he posted his first touchdown to tight end Darren Fells and led the Browns to 42 points. He recorded the two-highest single-game passing yardage totals by a rookie in Browns history with 397 at Houston Texans on December 2nd and 376 at Baltimore Ravens on December 30th. Mayfield was six-time NFL Pepsi Rookie of the Week in Weeks 3, 7, 9, 12, 14 and 17, was named NFL Rookie of the Month for November and was the AFC Offensive Player of the Week for Week 16. He led all 2018 NFL rookies in passing yards with 3,725, passing touchdowns with 27, completion percentage with 63.79 and passer rating with 93.7 and finished with a 63.8 completion percentage, fourth-highest in Browns history. He set NFL rookie record with 27 passing TDs, despite starting just 13 games. Also, his 27 passing TDs ranked fifth in a season among all Browns QBs and his 3,725 passing yards set a Browns rookie record, ranked sixth among NFL rookies all-time and were sixth-most in Cleveland history.

Baker has proven his acting chops, starring in many commercials including those for Hulu Sports. 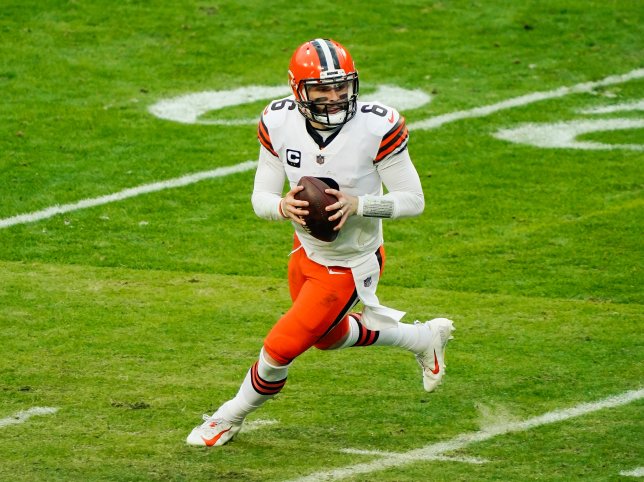 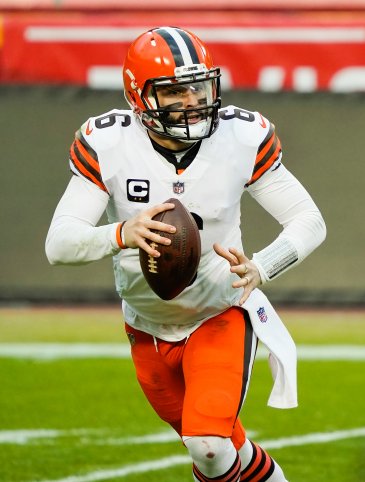 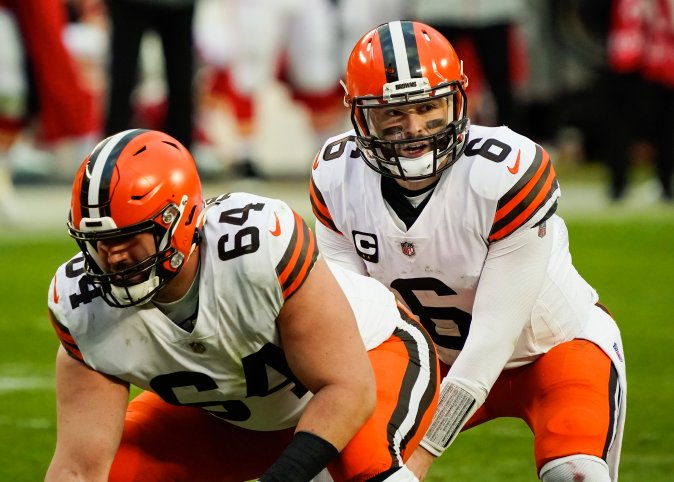 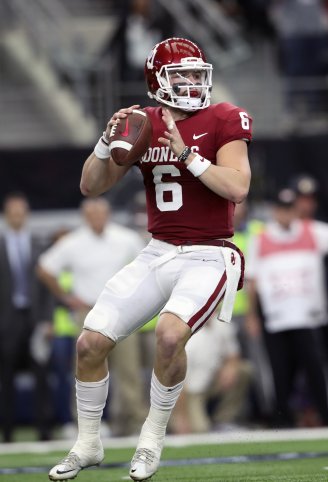 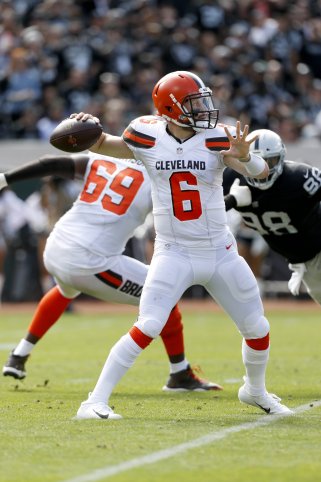 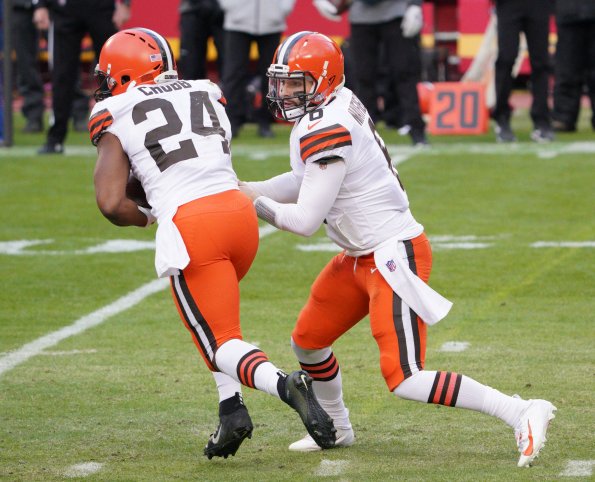 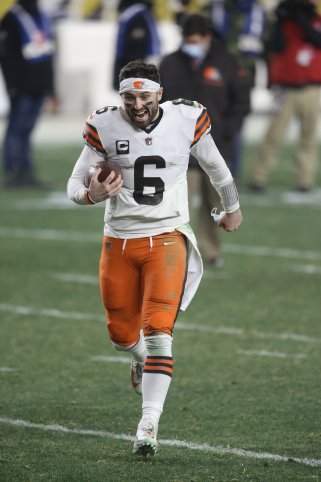 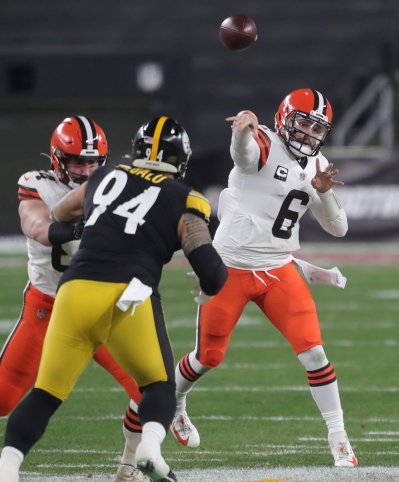 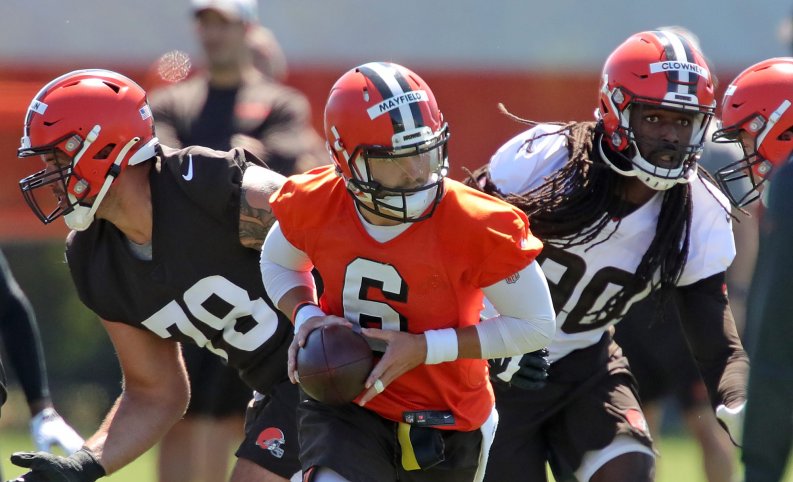 If you haven’t already heard, my Youth Football @ProCamps is back in Norman this summer! I’m excited to hit the field with #SoonerNation Reserve your spot at https://t.co/dNWlaDqgJ8 #Boomer https://t.co/HcRvAR8Bg0