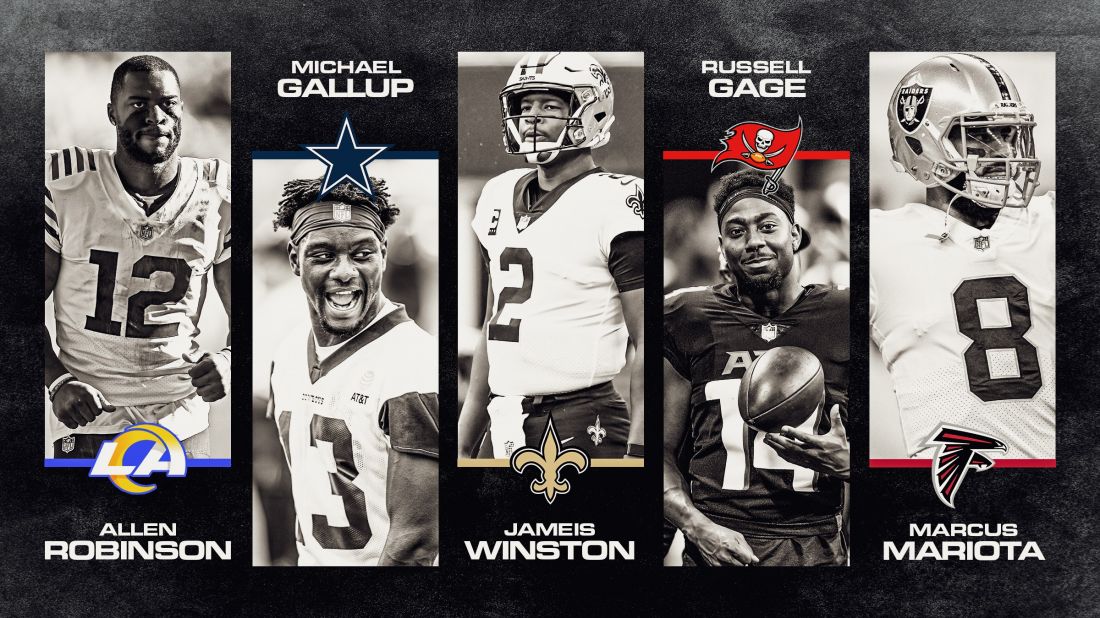 There’s been a major shift in power in the NFL this offseason, with the AFC becoming the clear-cut better conference than the NFC. We’ve seen the quarterback carousel spin in the last few weeks, with quarterbacks such as Russell Wilson and Matt Ryan landing in the AFC, while Khalil Mack, Von Miller and Davante Adams have all left the NFC, too.

That doesn’t mean there haven’t been some winners in the NFC, however. The Rams made a splash at wide receiver and rewarded Allen Robinson with a three-year deal. The Buccaneers got better and now have Tom Brady back in the mix, and the Panthers look better now than they did a month and a half ago.

Here are some of the biggest winners in the NFC after the first wave of offseason moves in 2022.

Robinson is a big winner of free agency, and not just because he cashed in with a $46.5 million deal for three years. More importantly, he finally gets to play with an above-average quarterback after spending his career catching passes from the likes of Blake Bortles, Nick Foles, Andy Dalton, Mitchell Trubisky and rookie Justin Fields.

Now, Robinson gets to play in an offense led by Matthew Stafford – one of the most aggressive quarterbacks in the NFL, and someone with an absolute cannon for an arm. That will only benefit Robinson as he looks to take the next step in his career.

While he’ll now be competing for targets with the league leader in that department last year, Cooper Kupp, Robinson should be in for another 1,000-yard season, which would be the third of his career. He’ll get chances to compete for deep passes, which he’s great at, and given his 6-foot-3 frame, he should be the Rams’ go-to target in the red zone.

Robinson could easily have a season with 90 catches, 1,200 yards and 13 touchdowns, which would put him in line for a Pro Bowl selection. This was a great landing spot in a pass-heavy offense in the weaker NFC.

The Buccaneers have had a terrific offseason, largely thanks to the fact that after two months, Tom Brady decided to come out of retirement and return to Tampa Bay for the 2022 season. That was just the start of things for Tampa Bay.

They did lose guard Ali Marpet, but the Buccaneers didn’t waste any time replacing him with a solid starter. They acquired Shaq Mason from the Patriots for a fifth-round pick, ensuring the offensive line would continue to play at a high level.

And finally, Tampa Bay gave Leonard Fournette a three-year deal after he flirted with the Patriots, bringing back their leading rusher from 2021. All around, it’s been a great offseason for the Super Bowl LV champs.

Gallup became a free agent for the first time this offseason but he didn’t take a look around on the market. That’s because the Cowboys gave him a five-year, $62.5 million extension before free agency even began, keeping him around as one of their starting receivers. It’s a considerable payday for the former third-round pick, but one he absolutely deserves – even if he is coming off a torn ACL.

What made Gallup an even bigger winner is the fact that the Cowboys traded Amari Cooper to the Browns, leaving Gallup as the No. 2 receiver in Dallas’ offense alongside CeeDee Lamb. Gallup had already been averaging about seven targets per game with the Cowboys last season, but now that Cooper is out of the picture, that number should jump.

Every receiver wants more opportunities to make plays, and for Gallup, that should translate to his second 1,000-yard season in the NFL. Gallup was already a player every Cowboys fan knew, but now casual NFL fans will get to know him even better because he’s in for a big season in 2022.

Quietly, the Panthers have had a good couple of weeks. They haven’t gone out and signed any huge stars in free agency, but they’ve made some quality additions that will allow them to compete next season – so long as they can get steady play at the quarterback position.

Among the many signings the Panthers made were starting guard Austin Corbett, starting center Bradley Bozeman and punter Johnny Hekker. All three will contribute in meaningful ways, with Corbett and Bozeman solidifying the middle of the offensive line. That’s critical with the offense being so run-focused around Christian McCaffrey.

The Panthers also signed a power back in D’Onta Foreman, who will take pressure off  McCaffrey in short-yardage situations. Rashard Higgins can be their No. 3 or 4 receiver, too, bringing good physicality to the offense. Matt Ioannidis, Cory Littleton and Xavier Woods could all be starters on defense, too. So in total, the Panthers may have signed five or six starters in free agency already.

The Saints considered trading for Deshaun Watson, which would’ve eliminated Winston as a candidate to be their starting quarterback next season. After they didn’t land Watson, they turned their attention back to Winston and committed to him as their starter with a two-year contract worth $28 million.

Winston gets another crack at being a starter after only playing seven games last season due to a torn ACL. He had 14 touchdowns and three picks in those seven starts, leading the Saints to a 5-2 record. And that was all without Michael Thomas at wide receiver, too.

Winston did a nice job cutting down on the turnovers with just three interceptions in seven games, which makes it even worse that he suffered a season-ending knee injury less than halfway through the year. With few starting opportunities left in the NFL right now, it’s good to see that Winston is getting another shot with the Saints because they looked like contenders before he got hurt.

With that defense and with Thomas coming back from injury, Winston could have the Saints competing for an NFC South title next season.

Mariota is most likely back as a starting quarterback after being a backup for two seasons in Las Vegas. He waited his turn and now gets a chance to lead the Falcons, who traded Matt Ryan to the Colts for a third-round pick.

Mariota is a downgrade from Ryan for Atlanta, but this is a huge opportunity for the former Titans and Raiders quarterback. If Mariota can put together a season where he ranks as an above-average quarterback, he could be in for a raise once his two-year contract expires.

That could be difficult given the Falcons’ lack of playmakers on offense, with Kyle Pitts being the only real threat on that side of the ball. Mariota will need to use his legs a bunch, too, with the Falcons offensive line looking shaky.

But even with a poor supporting cast around him, it’s a win for Mariota to even have the chance to start in the NFL again. After his 2019 season with the Titans, during which he was benched for Ryan Tannehill, it looked like he might be done as a starter. But the Falcons are giving him another shot as they look to rebuild their roster.

Reddick broke out with the Cardinals in 2020 with 12.5 sacks, more than he had in his first three seasons combined. He then hit free agency last year after the Cardinals didn’t exercise their fifth-year option on him, and he bet on himself by taking a one-year contract with the Panthers, attempting to prove 2020 wasn’t a fluke.

That bet paid off because Reddick had 11 sacks and 18 QB hits last season in Carolina, setting him up for a big payday in free agency this year. The Eagles stepped in and paid Reddick handsomely with a three-year deal worth up to $49.5 million with incentives.

After three years in the NFL, it looked like Reddick might struggle to find a position where he could contribute consistently, going from linebacker to edge rusher. But now that he’s lining up as a pass rusher full-time, he’s become a real threat to opposing offenses.

After the season he had in 2021, Reddick deserved a nice raise and he got that from Philadelphia. He could become even more of a household name with the Eagles next season and beyond.