Page: Current NFL Players Who are Locks to Get Into the the Hall of Fame

By Steve Tsilimos | Posted 1 year ago 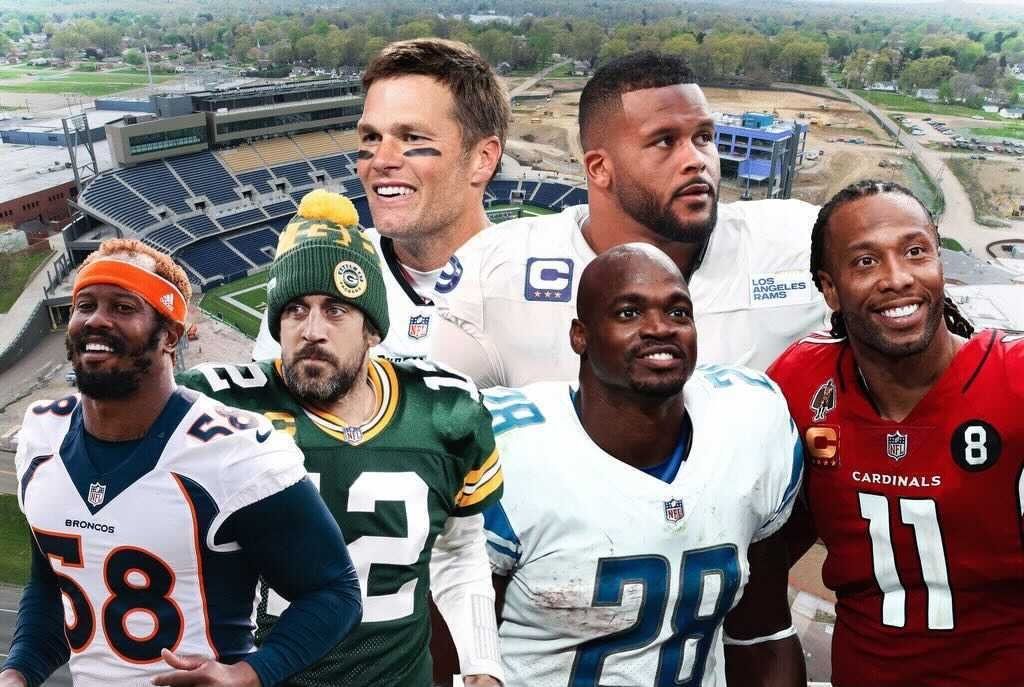 The Pro Football Hall of Fame is gearing up for its biggest event this weekend in Canton, Oh. Each year (excluding 2020) the greatest gathering in football happens in early August to induct the new class into one of the most exclusive fraternities in sports. It is expected that this year's supersized event starting on Aug. 4, will bring the most Gold Jackets (current HOF members)  to Canton to welcome in the classes of 2020 and 2021.

The Hall of Fame Game between the Pittsburgh Steelers and the Dallas Cowboys take place Thursday. The game is a small part of the big weekend where the Hall is enshrining a mega-group of football greats that includes the 2021 class and 2020's special Centennial Class. Spread out over two days, 28 individuals will enter the hallowed halls of Canton's football shrine, more than three times the size of a typical class.

How does the selection process work?

There is no official criteria for what makes a retired NFL player a Hall of Famer -- other than the player must be retired from the NFL for at least five years. The Pro Football Hall of Fame’s 48-person Selection Committee which is composed of one press member from each NFL city and 16 at-large delegates nominate qualified players each year alongside a fan base nomination process. A group of Selectors then do multiple rounds of voting to narrow down somewhere around 100 nominations to 15-finalists each year.

The finalists are then narrowed from 15 to 10 then even down to five during the Committee’s annual meeting -- “Selection Saturday.” From there the finalist must receive 80% of the votes to be enshrined forever alongside the game’s finest.

There are unwritten rules that the Committee is using to judge the eligibility of a future HOF member. Ranked below are my understanding of what the Committee has valued over the 58 year history of the club.

Longevity -- Sustaining a level of excellence, measured by career stats.

Years Elected -- Being a semi-finalist or finalist previously is a bonus. 2020’s Centennial class includes 10 players who have been finalists in year’s past.

It is extremely difficult to become a member of The Pro Football Hall of Fame, especially on the first-ballot that your name is eligible to be on. Luckily for us we are living in a great football era where there are (at least) 11-current players who have already put together a career worthy of such accolades.

Brady will be remembered as the greatest to play the game. Brady’s career could be split into two careers between 2001-2010 and 2011-present and each nine-year span would separately be enough to earn a gold jacket. The face of the league will quickly turn into the face of the HOF. Going into his accomplishments are not needed anymore, his greatness is undeniable and has been a key factor in shaping the NFL for over 20 years.

A Super Bowl MVP and three league MVP awards are enough to make Aaron Rodgers a sure thing to get to go to Canton. Rodgers is one of those athletes that took a position, which happened to be the undoubtedly most important in sports, and played it at an elite level. Rogers was Mahomes before Mahomes was Mahomes. The combination of his size, arm talent, speed and IQ had never been seen before which quickly translated into him being a superstar in the NFL. Rodgers showed no signs of his age (37) last season by putting together one of his best seasons yet, throwing 45 touchdowns and earning another MVP award.

In a league where edge-rushers have become the star of the defense, Aaron Donald has won three Defensive Player of the Year awards -- as an interior lineman. The last defensive tackle to win the DPOY award was HOFer-Warren Sapp in 1999. Mean Joe Greene was the only DT to  win the award twice before Donald and that took place in the ‘70s. Last season. Donald joined Lawrence Taylor and J.J. Watt as the only players to win three DPOY awards. Donald has absolutely dominated the line of scrimmage for nearly a decade, earning him six All-Pro nods, which makes him a no-brainer come selection time.

Being the best overall player on defense during three separate seasons and being a five-time First-Team All-Pro is enough for Watt to get into Canton on his first try. Then add in that he's a member of the 100 Sacks Club, plus the Man of the Year award and how much he has meant to the NFL for over a decade and it would be a complete surprise if he had to wait an extra year.

Peterson is currently fifth all-time in career rushing yards and is one of only eight players to have rushed for more than 2,000 yards in a season. Peterson has been the Offensive Rookie of the Year, League MVP, a three-time rushing yards leader and a seven-time Pro Bowler. Peterson is a no-brainer for the Committee who have always valued RBs highly.

The obvious best player on a Super Bowl winning team is a great start. By winning a Super Bowl MVP during a year and a postseason which he dominated puts him in rare company as a defensive end/linebacker. A three-time All Pro and a member of the 100 Sacks Club and a Unanimous NFL 2010s All-Decade Team, Miller has been at the top of a highly valued position for an entire decade.

Roethlisberger has won two Super Bowls, but no Super Bowl MVPs. Big Ben has led the league in passing yards twice and has been selected to the Pro Bowl seven-times, but has never been a league MVP. He has seven NFL records and sits near the top in many QB categories. Most importantly, Roethlisberger has been the face of a Steelers organization who has consistently been good and sometimes great for the past 17 years.

Gronkowski has helped revolutionize an entire position. The TE position has seen some studs come along (Shannon Sharpe, Tony Gonzalez) but none quite as prolific as Gronk. Gronkowski has many single game/season, career and postseason records while being a pivotal piece on one of the greatest dynasties in NFL history. Then his decision to join Brady in Tampa Bay and play a significant role on yet another Super Bowl team lets him walk into Canton with ease.

The last guy on my first ballot list is the ageless wonder Frank Gore. Gore proves that a play does not need to dominate the game at any given one time to make it to Canton. Gore has made five-Pro Bowls over his career but only one second-team All Pro team. The committee will reward Gore for his devotion to the game and because he played the running back position.

Second Tier -- Players who are going to get in but not an absolute first-ballot lock, yet.

Mahomes has put together enough dominance in the three-full-season that he has played to make him a HOFer. If Mahomes never played another game in his career I do not think he would be a guaranteed first=ballot guy but he would get in. His early flash of brilliance is unparalleled in any sport which is exactly the type of guys the voting committee loves. Mahomes’ current trajectory has him on pace to be one of the greatest to ever play which means he is more than likely a first-ballot guy, but he still needs a few more seasons before that is guaranteed.

Wilson has been consistently winning football games with stellar play for a decade while leading a team to two Super Bowls, one of which the Seahawks won. Wilson has been consistently great for long enough to get him in but there are some holes in his resume. He has only been a second-team All Pro once and never a first-team member. He did not win the Super Bowl MVP the year his Seahawks won and he has never won a regular season MVP.

The Selection Committee does not value offensive linemen as much as most other positions making it hard(er) for OL to get into Canton. Peters has been one of the top left-tackles in the NFL for the past decade which earned him a spot on the NFL 2010s All-Decade Team. That mixed with a Super Bowl victory with the Eagles should be enough to get him in.

Jones has been a game-changer since he entered the league which could explain why he became the fastest player in NFL history to reach 10,000 career receiving yards back in 2018. When Jones is healthy his impact on the game at the receiver position is rivaled by few which is why Jones' career average of 96 receiving-yards per game is highest among eligible receivers.

Third Tier -- Players who will most likely get in but still have some work to become a lock.

It would be surprising if any of the guys mentioned above did not get in with their already stellar resumes but it would probably take a few tries first.