Page: The Cream of the Quarterback Crop 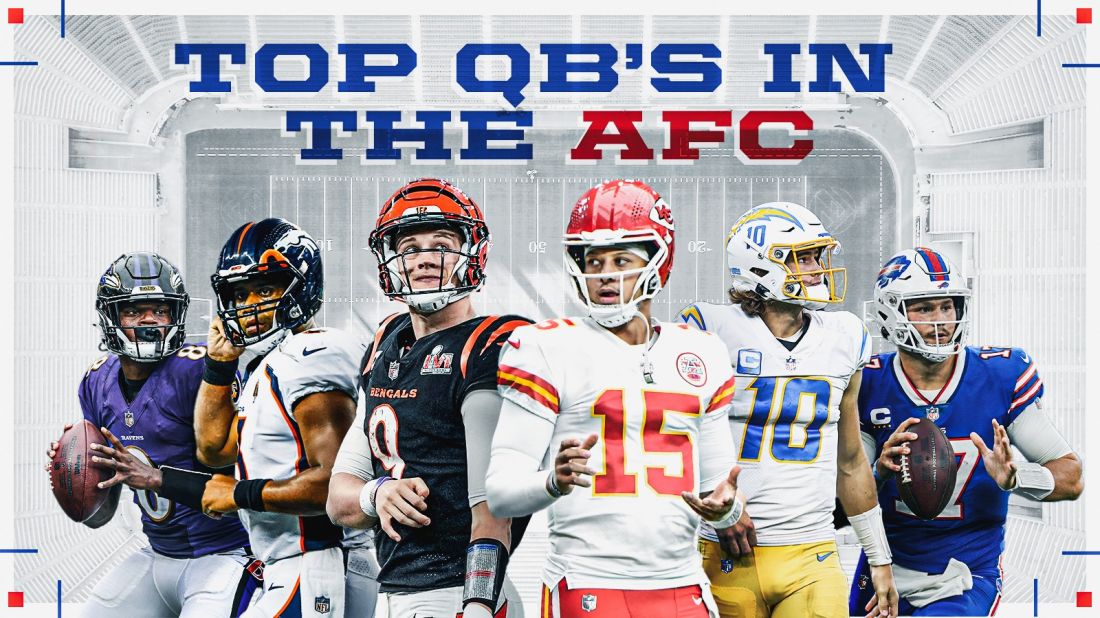 The American Football Conference is absolutely stacked with elite quarterbacks. It’s quite possible that today’s AFC has the best and most competitive QB collection of any conference in NFL history. The pedigree of QBs in the AFC West is especially beau monde, and the division race will likely be a bloodbath.

The Chiefs’ Patrick Mahomes II is a surefire Hall of Famer, with two Super Bowl appearances already in four seasons.

The next season concluded with Kansas City winning the Vince Lombardi Trophy at the expense of San Francisco. Mahomes led the Chiefs on a furious comeback in Super Bowl LIV, ultimately knocking off the Niners 31-20. It was the Chiefs’ first Super Bowl victory in 50 years, and Mahomes became the youngest SB MVP in NFL history.

Mahomes made a serious statement to start the 2022 season, tossing five touchdown passes during a dazzling demolition of the Cardinals in Arizona.

The bar is set high in the AFC West, and every quarterback is potentially up to the task.

The Seahawks smashed the Broncos 43-8, largely due to Wilson out-dueling Peyton Manning on the big stage. Wilson finished 18 of 25 for 206 yards and two touchdowns, rushed for 26 yards, and posted a QB rating of 123.1.

Linebacker Malcolm Smith was chosen as the game’s MVP, much to the disbelief of many fans who watched Wilson’s performance. Wilson somehow seems to get overlooked quite often in these types of situations. Despite enjoying a Canton-caliber career, Wilson has never received even one vote for league MVP. Strange but true.

The new-look Broncos failed to stick it to the Seahawks in Week 1, losing a tight one in Seattle 17-16. Wilson’s homecoming was the first stop on the schedule for Denver, and the Legion of Boom prevailed. Instead of putting the ball in Wilson’s hands on 4th-and-5 with the game on the line, Denver opted to attempt a 64-yard field goal. Brandon McManus missed.

Fortunately for Wilson and the Broncos, Denver has 16 more games to write the ending for the story. This includes six direct opportunities to make up ground in the AFC West in head-to-head matchups vs. Las Vegas, Kansas City, and Los Angeles. Buckle up.

The Chargers’ Justin Herbert is one of the most electrifying quarterbacks. In 2020, Herbert won Rookie of the Year, setting several records along the way.

Only Andrew Luck, formerly of the Indianapolis Colts, threw for more yards than Herbert during their rookie season.

The future is bright in Los Angeles with Herbert at the helm. The Chargers are on the rise, striving to bring The City of Angels another Super Bowl victory in the short term.

LA took the first step in Week 1, defeating Derek Carr and the Las Vegas Raiders in SoFi Stadium 24-19. Herbert slung three TDs and finished with a QB rating of 138.1.

The Chargers tackle the Chiefs in Arrowhead Stadium to kick off Week 2 on Thursday night. Herbert and Mahomes will shoot it out to help determine which team will remain undefeated.

The Raiders play host to the Cardinals at Allegiant Stadium for their home opener on Sunday, looking to get into the win column.

Of the AFC West’s quarterback coliseum of legit gladiators, three QBs are likely Hall of Famers (Mahomes, Wilson, Herbert). Mahomes is a virtual guarantee, Wilson has a strong case, and Herbert is on track based on early projections. The Raiders’ Derek Carr is potentially the weakest overall QB of the quartet. The runt of the litter.

However, Carr has displayed some serious grit and poise in the pocket over the years and is no slouch.

In 2016, Carr led the Raiders to seven comeback victories en route to a stellar 12-4 record. Had Carr not fallen to injury at the end of the season, the Raiders may have been the squad celebrating the largest comeback in Super Bowl history. Instead, the Atlanta Falcons were left holding Tom Brady’s beer as the New England Patriots won it all yet again. Carr finished in a third-place tie with Cowboys’ RB Ezekiel Elliott in MVP voting, while Raiders fans wondered what could have been.

Now Carr is reunited with college connection Davante Adams, who came over from Green Bay. This type of reunion has proven to pay dividends (refer to Joe Burrow and Ja’Marr Chase) and Adams has logged three consecutive 1,300+ yard seasons.

Carr and Adams have already rekindled their gridiron bromance by connecting 10 times for 141 yards and a touchdown in Week 1. Las Vegas hit the jackpot by signing Adams.

It’s reasonable to think that 3 teams make the playoffs out of the West, with four aces at the quarterback position. The problem is that they’ll have to face teams like the Buffalo Bills, Cincinnati Bengals, and Baltimore Ravens, who have top-tier QBs themselves.

Ravens’ QB Lamar Jackson was unanimously voted league MVP in 2019, securing all 50 votes for the first time since 2010 (Tom Brady). Jackson became the youngest quarterback to win MVP, at 22 years and 358 days old.

“Smiley Face” shredded defenses on the ground for 1,206 yards and seven scores (breaking Michael Vick’s single-season QB rushing record in the process). Jackson lit up the league through the air as well, throwing for 3,127 yards and 36 TDs, while registering a 113.3 QB rating.

Guess who’s in a contract year? Jackson is looking to get paid what he’s worth in today’s market, and the man is self-admittedly obsessed with winning a Super Bowl. Baltimore is not a team to be overlooked in the AFC, especially with Jackson under center. Jackson is still an elite-level player, and he has everything to prove.

Meanwhile, Joe Burrow reached the Super Bowl in just his second go-round with the Cincinnati Bengals. The Bengals lost 23-20 to the Rams, but Burrow is a proven winner. In 2019, Burrow won the Heisman Trophy. That same year the tandem of Burrow and Chase led the LSU Tigers to a national championship. It only took the duo two years in the Cincinnati system to ascend the ranks, suddenly playing for all the pigskin marbles.

If the Bengals can find a way to protect Burrow properly, there is no limit to what can be accomplished. Burrow did throw four interceptions and lost a fumble in a Week 1 loss to the Pittsburgh Steelers, but that was likely the exception rather than the rule.

One AFC team that really came out swinging to kick off the season was the Buffalo Bills. Led by the most dominant overall quarterback in the league, the Bills trampled the reigning Super Bowl champion Rams in their own backyard, easily winning 31-10.

Josh Allen hooked up with bestie WR Stefon Diggs eight times for 122 yards and a score. At the end of the day, Allen torched L.A. for 297 yards and three passing TDs, while racking up 56 rushing yards and another touchdown on the ground. Allen looked every bit the part of an MVP candidate, and the Bills were scary good, overall.

In 2020, Allen set franchise records for Buffalo in passing yards (4,544) and touchdowns (37). The Bills won their first division title since 1995, and Allen finished second in MVP voting to Packers’ QB Aaron Rodgers.

Buffalo was eliminated by Kansas City in the AFC Championship game by a score of 38-24. In 2021, Allen became the first quarterback in NFL history to record at least 100 touchdown passes and 30 rushing touchdowns in his first four seasons. Again, the Bills won the AFC East, and again Buffalo lost in the playoffs to Kansas City in Arrowhead Stadium.

The Herd’s heartbreaking loss in that 42-36 overtime thriller was one of the most exciting games in recent years. No doubt, Allen and the Bills are using the memory of that pain and disappointment as fuel for the fire of a championship run. Buffalo has been knocking on Lombardi’s door for a few years now, and Allen is in prime position to kick it down.  In an AFC deck stacked with quarterback aces, Allen is the Ace of Hearts.