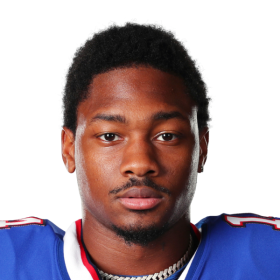 Pillsbury United Communities co-creates enduring change toward a just society. Built with and for the people we serve, our united system of programs, neighborhood centers, and social enterprises empowers individuals and families across the region to own their future on their own terms.

Stefon has visited patients at The University of Minnesota Masonic Children's Hospital in Minneapolis. “It’s the holiday season, so it’s the season of giving back, and spending time is the biggest thing. Just to see the smile on their faces when I come and hang out for a little while is huge,” American Heart Association.

In his early years, Diggs attended Our Lady of Good Counsel High School where he was ranked as the No. 2 wide receiver by Rivals.com and was rated as the No.1 recruit in the state of Maryland by Rivals.com. As a sophomore, Diggs recorded 810 yards receiving with 23 touchdowns while as a j...

In his early years, Diggs attended Our Lady of Good Counsel High School where he was ranked as the No. 2 wide receiver by Rivals.com and wa...

In his early years, Diggs attended Our Lady of Good Counsel High School where he was ranked as the No. 2 wide receiver by Rivals.com and was rated as the No.1 recruit in the state of Maryland by Rivals.com. As a sophomore, Diggs recorded 810 yards receiving with 23 touchdowns while as a junior he was the runner up Gatorade Maryland Player of the Year and was the MVP of the U.S. Army All-American Junior Combine in 2011. In his senior year, he recorded 770 yards receiving and 8 touchdowns and also racked up 277 rushing yards and 3 touchdowns on the ground.

After he finished high school, Diggs committed to the University of Maryland where as a freshman in 2012, he played in 11 of Maryland’s 12 games at wide receiver and on special teams, ranking second in the ACC and eighth nationally with 172.4 all-purpose yards per game. His 1,896 all-purpose yards were the second-most in a single season in school history, trailing only Torrey Smith with 2,192 in 2009. He also ranked fifth in the ACC in receiving yards with 77.1 per game, ranked second in the ACC in kick return average with 28.5 and fifth in punt return average with 10.0. He led the team in receptions with 54, receiving yards with 848, and touchdown receptions with 6. Diggs made his collegiate debut on September 1st  against William & Mary where he recorded three receptions for 30 yards and returned three punts for a total of 50 yards and on September 22nd against West Virginia, he earned the ACC Rookie of the Week honors after he recorded three receptions for 113 yards and two touchdowns. On October 6th against wake forest, he earned for the second time the ACC Rookie of the Week honors after he recorded a second straight 100-yard receiving game with 105 yards on five receptions and on October 13th against Virginia he earned the ACC Specialist of the Week honors after he recorded 239 all-purpose yards. He earned for the third time of the season the ACC Rookie of the Week honors on October 27th against Boston College where he recorded 152 yards on a season-high 11 receptions, including a 66-yard touchdown. As a sophomore in 2013, Diggs was an honorable mention All-ACC selection by the media and coaches and was a member of the team’s leadership council. He began his sophomore campaign with an impressive game against FIU on August 31st where he recorded 98 yards receiving, one touchdown and 70 yards on three kickoff returns and finished the season with eight receptions for 67 yards against Wake Forest. In his junior year in 2014, Diggs earned second-team All-Big Ten honors from the coaches and was named an honorable mention All-Big Ten honoree by the media. He finished the season leading the team in receptions with 52, receiving yards with 654 and receiving touchdowns with 5. He also had three 100-yard receiving games this year, which is tied for fourth in the Big Ten.

After his junior season, Diggs decided to forego his senior season and enter the 2015 NFL Draft where he was selected in the fifth round by the Minnesota Vikings. During his rookie year, Diggs became the 1st Vikings rookie to lead the team in receptions en route to All-Rookie honors from the PFWA, ranking third in team history in rookie receptions with 52 and 5th in rookie receiving yards with 720. He also became the 1st Vikings rookie WR since Randy Moss in 1998 to post consecutive 100-yard games against the Kansas City Chiefs on October 18th with 129 yards and at Detroit Lions on October 25th with 108 yards. On October 25th he also caught his first 1st career TD pass on a diving 36-yarder from Teddy Bridgewater, earning Pepsi Rookie of the Week honors for the game. In his NFL debut against the former Super Bowl 50 Champions the Denver Broncos, Diggs recorded 6 receptions for 87 yards, tying a Vikings record for most catches by a player in his debut game and ranking 3rd in club history for most yards receiving in a debut. Diggs caught a pass in every game he played and his 720 receiving yards and 13 catches of 20+ yards on the season ranked 2nd among NFL rookies behind the Oakland Raiders rookie receiver Amari Cooper. In the 2016 NFL season, Diggs ranked 16th in receptions with a team-high 84, and 13th in receiving yards per game with 69.5. He became the 3rd Vikings WR with back-to-back 100-yard receiving games in Weeks 1 and 2 at Tennessee Titans with 7 receptions for 103 yards and against the Green Bay Packers with 9 receptions for 182 yards and 1 touchdown, and became the 2nd-most receiving yards by a Vikings WR after Weeks 1 and 2 in franchise history. On November 13th at the Washington Redskins, Diggs matched his career-high 13 receptions for 164 yards, becoming the 1st player in NFL history to reach 13 catches in consecutive weeks and setting a Vikings franchise record for total receptions in back-to-back games with 26. In the 2017 season, Diggs caught 7 passes for 93 yards and 2 TDs, which was his 2nd career multi-TD game, against the New Orleans Saints, joining Randy Moss as the last 2 Vikings to catch 2 TDs during Kickoff Weekend. He finished the season with 64 receptions for 849 yards and a career-high 8 TDs while starting a career-high 14 games, helping the Minnesota Vikings clinch the NFC North title. On January 14th, 2018, Diggs made the play of a lifetime, coined as the ‘Minneapolis Miracle’ by Vikings PBP Paul Allen, hauling in a deep pass from Case Keenum and scampering for a 61-yard TD catch as time expired for a walk-off win against the New Orleans Saints in the NFC Divisional Round, becoming the first time in NFL history that a playoff game has ended on a touchdown on the final play. In 2018, during the matchup against the New Orleans Saints on October 28th, Diggs became the 2nd-fastest Viking to reach 3,000 career receiving yards in his 48th career game. He finished the season setting career highs in receptions with 102, receiving yards with 1,021, and receiving TDs with 9 and joined Adam Thielen with his 113 receptions as the first pair of Vikings to record 100 receptions in the same season. They also became the first pair of Vikings to each record 1,000+ rec. yards in a single season since Randy Moss and Cris Carter did so in 2000.

On March 20, 2020, the Vikings traded Diggs and their seventh round draft pick to the Buffalo Bills for their first (Justin Jefferson), fifth, and sixth round picks in the 2020 NFL Draft, in addition to a fourth round pick in the 2021 NFL Draft. In his debut with the team on September 13 against the New York Jets, Diggs caught eight passes for 86 yards as the Bills won 27–17. In Week 2 against the Miami Dolphins, Diggs finished with eight catches for 153 yards and his first touchdown as a Bill during the 31–28 win. In Week 4 against the Las Vegas Raiders, he had six receptions for 115 yards in the 30–23 victory. In Week 9 against the Seattle Seahawks, Diggs recorded nine catches for 118 yards during the 44–34 win. In Week 10 against the Arizona Cardinals, Diggs recorded ten catches for 93 yards and a 21-yard touchdown catch with 34 seconds left in the game to give Buffalo a late lead, however, the Bills would lose the game 32–30 due to the Hail Murray.

During Buffalo's Week 13 primetime matchup with the 49ers, Diggs caught ten passes on ten targets for 92 yards, surpassing the 1,000-yard receiving mark for the third consecutive season during Buffalo's 34–24 victory. The following week, on Sunday Night Football against the Pittsburgh Steelers, Diggs caught ten passes (his fourth such game on the year), for 130 yards and a touchdown during the Bills' 26–15 win. He tied Eric Moulds for the franchise record in receptions during a single season with exactly 100. He also became the quickest player in NFL history to reach 100 catches in a single season with a new franchise. In Week 15 against the Denver Broncos, Diggs recorded 11 catches for 147 yards during the 48–19 win. In Week 16, Diggs had nine catches for 145 yards and three touchdowns in a 38–9 win over the New England Patriots on Monday Night Football, breaking Eric Moulds' franchise record for receiving yards in a single season. His efforts earned him the AFC Offensive Player of the Week award. For the 2020 season, Diggs tallied 127 receptions and 1,535 yards, both marks leading the NFL, and eight touchdowns.

In April of 2022, he signed a four-year extension. 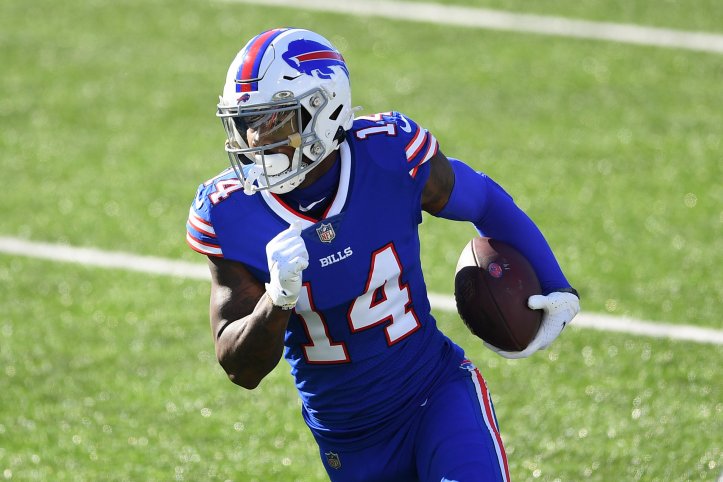 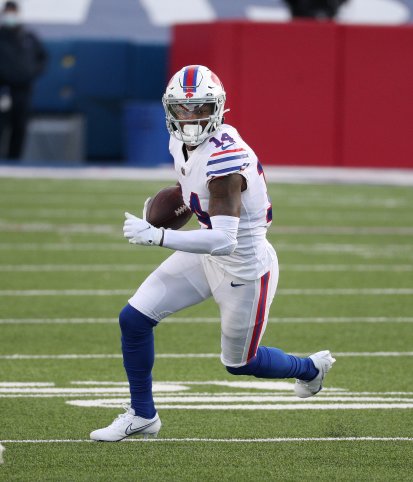 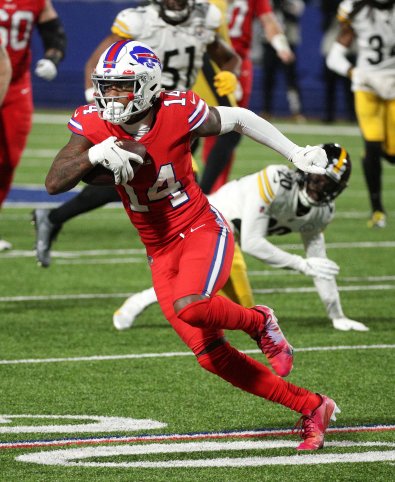 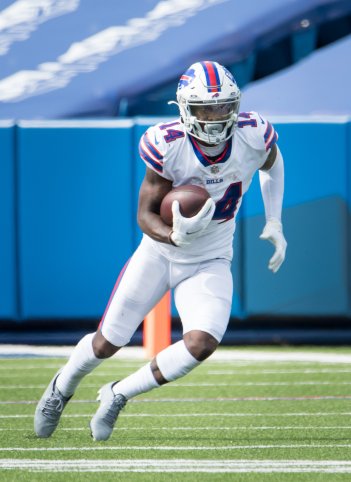 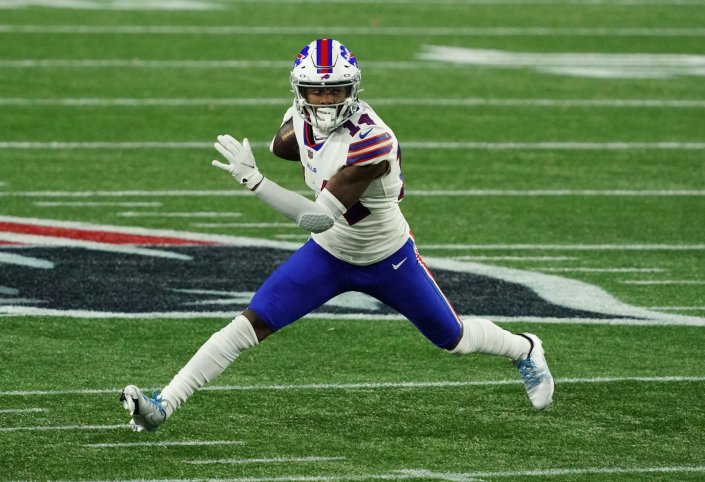 RT @Rodger_Saffold: Still got a lot to work on but TUFFALO prevailed! On to the next! #BillsMafia https://t.co/QnxsTEBPI5