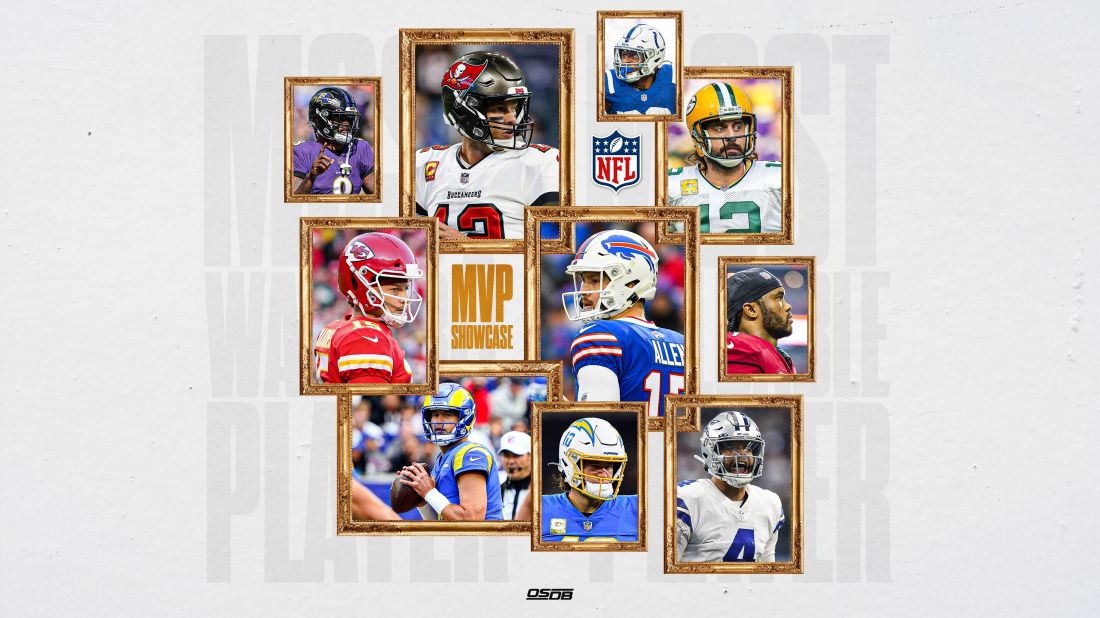 Parity is seemingly at an all-time high in the NFL, with no team truly emerging as the best in the league. The same goes for the MVP race where there are 10 legitimate contenders for the coveted award.

Now 12 weeks into the season, we still don’t have a clear idea of who will win league MVP. As always, the list of favorites is dominated by quarterbacks, but with so many playing at a high level, the gap between those at the top is razor thin.

Among the primary MVP candidates, there’s a mix of youth and wisdom – savvy veterans and explosive young guns. There’s breakout back who has remained in the, um, running, though he’s unlikely to unseat the passers.

Here are the 10 best contenders for Most Valuable Player, ranked in order of who should win the award at season’s end.

After beating the Rams in Week 12, the Packers now look like they might be the best team in the league. And the craziest part? They haven’t had the chance to play their best football yet because of all the hurdles they’ve had to overcome. Rodgers is the glue that keeps it all together, playing at an extremely high level again with 23 touchdowns and only four picks in 11 games. Oftentimes, the quarterback of the best team in the league wins MVP, and if the Packers go on a run in their final five games against the Bears, Ravens, Browns, Vikings and Lions, Rodgers will have as good a case as anyone to be named MVP… again.

It’s incredible that 44-year-old Tom Brady leads the NFL in completions, attempts and touchdown passes. He’s being sacked at the lowest rate of any quarterback, too, taking full advantage of the great protection he’s gotten from his line. The Bucs almost look better than they did last year when they won the Super Bowl, ranking first points scored and eighth in total defense. With a favorable schedule to close out the year against defenses that struggle mightily against the pass, Brady has an inside track to the MVP award.

Murray missed three games with an ankle injury, a significant setback for the Cardinals’ quarterback. He leads the league in completion percentage, yards per attempt and passer rating, though, debunking the narrative that he’s primarily a runner. The Cardinals currently own the best record in football at 9-2 and so long as he returns this week, Murray will get to face the Bears and Lions over the next three games. He won’t have the numbers to match Brady or Rodgers because of his injury, but if the Cardinals run the table, it’ll be tough to give the award to anyone else.

Prescott put up monstrous numbers in the beginning of the season, but he’s tapered off with six touchdown passes and three interceptions in his last four games. With the Cowboys still squarely in the mix in the NFC, he remains an MVP candidate. The Cowboys have a fairly easy schedule, two games against Washington and one each against the Giants and Eagles, so he could put together a strong finish. If the Cowboys continue to lose after going 1-3 in their last four, Prescott will fall out of the race.

Mahomes ranks 17th in passer rating with 25 touchdown passes and 11 interceptions. He’s been staggeringly turnover-prone but he’s begun to clean that up with one interception and six touchdowns in his last three games. He’s not playing the way he did when he won MVP in 2018, but the Chiefs have won four straight and look like the unquestioned best team in the AFC West after a slow start. With how often the Chiefs throw the ball, Mahomes is sure to rank among the league leaders in passing.

Allen and the Bills have been wildly inconsistent. and it’s honestly surprising to see him ranked among the favorites to win NFL MVP. He has eight touchdown passes and seven interceptions in his last four games, struggling in the Bills’ 9-6 loss to the Jags and their 41-15 defeat to the Colts. He’s a dual-threat quarterback with 383 yards rushing to go with his 3,071 yards through the air, but his careless giveaways and recent struggles could cause him to fall behind the leaders. Not to mention, the Bills still have to play the Patriots twice and the Bucs once.

Fresh off a four-interception game against the Browns, Jackson has 15 touchdown passes and 12 interceptions. That’s double the interceptions he had in 2019 when he won MVP and he’s not on pace to throw 30 touchdown passes. Of course, we can’t ignore his running ability (707 rushing yards) but he also has just two touchdowns on the ground. So, in total, he’s scored 17 touchdowns – slightly more than half of Brady’s total. The Ravens lead the AFC but Jackson will need to take things up to catch Brady and the top candidates.

Finally, a non-quarterback. Taylor has been the best running back in the NFL, averaging a whopping 5.8 yards per carry and 100 yards per game with 14 touchdown runs. He still doesn’t have as many carries as Derrick Henry had before getting hurt, but Taylor is the most important player on the Colts. Indianapolis has 4,396 total yards and Taylor has accounted for 1,541 -- more than one-third. At 6-6, the Colts aren’t doing anything to help Taylor’s MVP case as a team, but he’s deserving of consideration because of how important he is to this team.

Herbert has a little bit of Josh Allen in him, for the fact that they’re both incredibly inconsistent. He’ll put together a near-perfect, three-game stretch with 11 touchdowns and no interceptions, and then he’ll lay an egg like he did against the Vikings and Ravens with 195 yards, one touchdown and one pick in each. The Chargers are only 6-5 and falling behind in the AFC West, failing to find any consistency from week to week. Their only truly tough matchups left are against the Bengals and Chiefs, but time is running out for the Chargers’ gunslinger in the MVP race.

Stafford was a favorite pick for MVP in the early part of the season, but he had an abysmal month of November with five touchdowns and five interceptions – including three pick-sixes. To put his numbers into perspective, Jared Goff had fewer interceptions and a better record than Stafford in their last three games. The Rams have lost three straight and no longer look like the world-beaters everyone once saw them as, which is crushing to Stafford’s MVP chances. He’s still third in passing yards, second in touchdowns and fourth in passer rating, but the Rams’ recent drop-off doesn’t reflect well on the quarterback.