By Cameron Dasilva | Posted 7 days ago 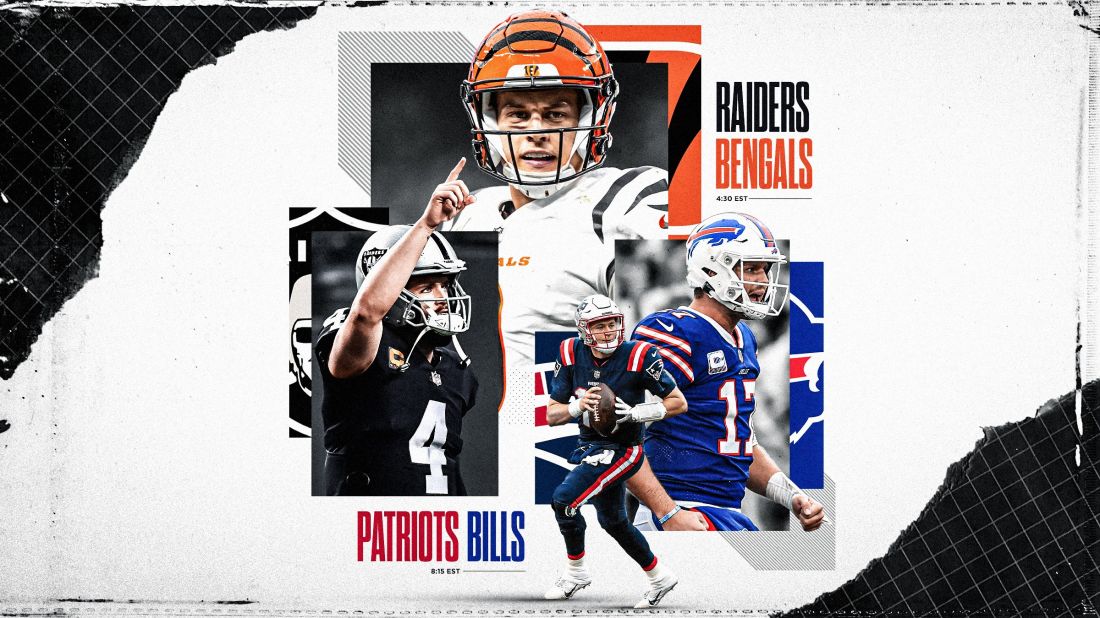 The NFL’s Super Wild Card Weekend gets underway on Saturday with a pair of AFC matchups. The Raiders, who got into the playoffs with a dramatic overtime win against the Chargers, will visit the AFC North champion Bengals. The Patriots will also head north to Buffalo to take on their division rivals, the Bills.

All four teams have Super Bowl aspirations and are capable of making a deep playoff run, especially given the parity we’ve seen in the NFL this season.

Here’s a preview of each AFC matchup on Saturday.

3 reasons the Raiders can beat the Bengals

Derek Carr has carried this team all season, and with how inconsistent the Bengals defense has been, Carr could be in for a big game throwing the ball.

Darren Waller is one of the best tight ends in the game and if the Raiders can get him matched up on Jessie Bates III – who’s not very good in coverage – in the red zone and on third down, Las Vegas will convert at opportune times.

There aren’t many pass rushes better than the Raiders’, led by Maxx Crosby. Pressuring Joe Burrow from start to finish will throw Cincinnati’s offense off and could lead to a few turnovers; Burrow threw 14 interceptions in 16 games.

3 reasons the Bengals can beat the Raiders

The Bengals offense is firing on all cylinders right now, scoring 75 points in their last two games where the starters played. Burrow has been sharp in recent weeks and is capable of throwing for 400 yards if he gets time in the pocket.

The Raiders aren’t very deep in the secondary and don’t have the cornerback trio to contain Chase, Tee Higgins and even Tyler Boyd. Cincinnati has a huge advantage in this department.

The Bengals are just average in the red zone, but Las Vegas’ defense is terrible inside the 20. Cincinnati won’t have to settle for field goals much, if at all.

Chase is only a rookie but he’s already become one of the best wide receivers in the league. His speed and downfield explosiveness are going to cause problems for the Raiders’ defensive backs. In Week 17, Chase had 11 catches for 266 yards and three touchdowns,

Waller returned from injury in Week 18 but he’s a difference-maker when healthy. He can take pressure off of Hunter Renfrow as the Raiders’ go-to target on offense, forcing the defense to account for the big tight end.

Why the Raiders will win the Super Bowl

They have a pass rush that can cause turnovers and a quarterback who can make every throw when he’s on. They just need Carr to be accurate and get the ball into the hands of his playmakers.

Why the Raiders won’t win the Super Bowl

They simply don’t have enough playmakers on either side of the ball, especially on offense. If teams can find a way to contain Waller and Renfrow, Vegas will struggle to produce points.

Why the Bengals will win the Super Bowl

With Burrow cutting down on the turnovers, Joe Mixon running it well between the tackles and the trio of Chase, Higgins and Boyd on the outside, the Bengals have one of the best offenses in the playoffs – and can outscore just about any team.

Why the Bengals won’t win the Super Bowl

Cincinnati is an incredibly young team with an inexperienced head coach, to boot. Their defense could have trouble slowing down the likes of the Bills and Chiefs if they advance to the divisional round and conference championship.

3 reasons the Patriots can beat the Bills

Bill Belichick is a genius when it comes to stopping the opposing team’s best player. Expect him to draw up a plan to slow down the Josh Allen-Stefon Diggs connection, which is the key to beating the Bills.

The Patriots ran the ball well this season with Damien Harris and Rhamondre Stevenson, and given the frigid temperatures, New England could have the edge on the ground.

Mac Jones is a conservative quarterback who will protect the ball and not make any critical errors, letting his playmakers do the heavy lifting on offense.

3 reasons the Bills can beat the Patriots

The Patriots rank 25th in the NFL in rushing yards allowed per carry and gave up the 11th-most yards on the ground. If Buffalo can get Devin Singletary and Allen going, they’ll control the clock.

Buffalo picked off Jones twice in their last meeting after Jones threw just three total passes in the first matchup between these teams. The Bills will win if they can pressure the rookie and force the ball out quickly.

The Bills are playing some of their best ball on offense right now, scoring at least 27 points in five straight games. Unless the Patriots maintain possession and milk the clock, they won’t be able to keep up with the Bills’ offense.

Whether he’s throwing the ball or running it, Allen is the Bills’ most important player – and also their most dangerous. If the Patriots can’t contain him like in Week 16, they’ll be in for a long day.

The Patriots are at their best when they’re running the ball with Harris and Stevenson. They each averaged 4.6 yards per carry and if they get rolling on Saturday, the Bills won’t get many chances on offense.

Why the Patriots will win the Super Bowl

They have Bill Belichick. The Patriots may not be the most talented team, but they have the best coach in the playoffs and he’ll find ways to exploit opponents’ weaknesses in a way that few others can.

Why the Patriots won’t win the Super Bowl

They simply don’t have the offense to keep up with other teams – like the Bills and Chiefs. They’ll be reliant on great defensive play and running the ball successfully, but Jones is limited, as is their receiving corps.

Why the Bills will win the Super Bowl

If Allen can take care of the football and not force the issue, the Bills are going to go far. They already beat the Patriots and Chiefs this season and are on a roll offensively right now. They also scored the third-most points and allowed the fewest points and yards this season.

Why the Bills won’t win the Super Bowl

They’ll live and die by Allen’s play. There’s a decent chance he’ll feel the need to carry the offense and make careless errors to cost the Bills.