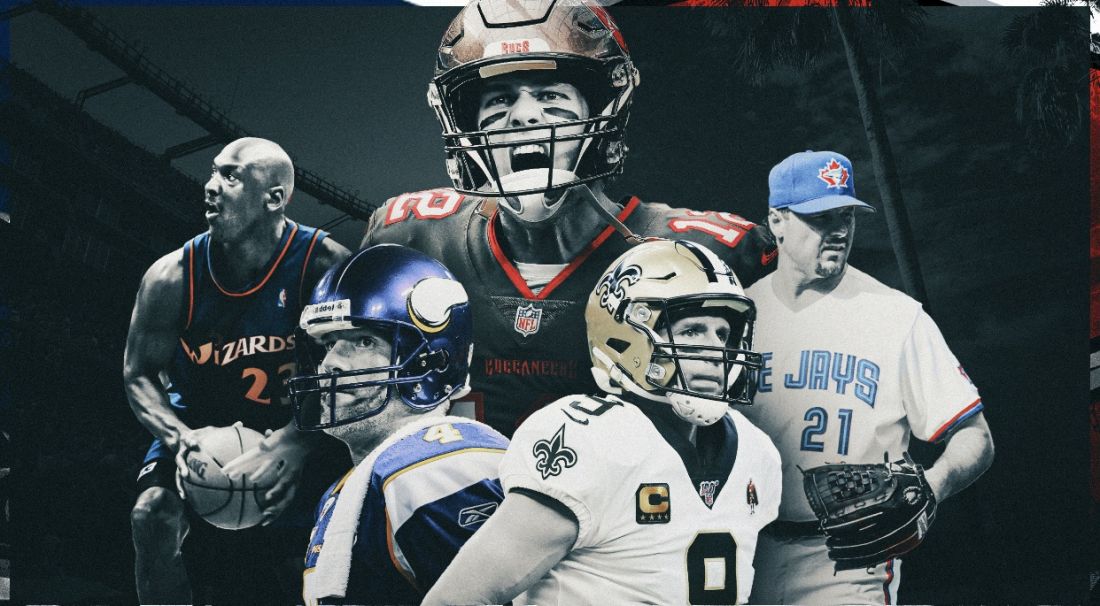 Sunday’s game between the Tampa Bay Buccaneers and New England Patriots will carry a little bit more meaning for seven-time Super Bowl champion Tom Brady. It’s his first game against the team that drafted him 199th overall in 2000 – the same team that he won six rings with and turned into a dynasty in the early 2000s.

Brady will return to Foxborough’s Gillette Stadium to take on Bill Belichick and the Patriots, taking the field as the reigning Super Bowl MVP after winning it all in his first season with the Bucs. Brady has continued to play at a high level despite being 44 years old, and there should be some added motivation as he gears up to take on his former team.

This isn't the first time a superstar has faced his old team, and it won't be the last. Below are 15 stars who suited up with a new team after spending either the early part of their career or the majority of it with one franchise.

Jordan played his first 13 seasons in the NBA with the Bulls, leading the league in scoring 10 times and leading Chicago to six championships. After he retired following the 1997-1998 season, he returned to the court in 2001 with the Wizards. His first game against his former team came on Jan. 4, 2002, in Washington, D.C.

Jordan scored 29 points on 9-for-24 shooting, adding seven rebounds and three assists with two steals and two blocks. It wasn’t his most efficient game, but he helped lift the Wizards to an 89-83 victory with 25 points in the first half alone.

Favre is one of the most iconic players in Packers lore, spending 16 seasons in Green Bay and making 253 career starts. He won MVP three times, led them to one Super Bowl victory and made the Pro Bowl nine times with the Packers. His infamous split with the Packers wasn’t the most amicable, getting traded to the Jets in 2008

It wasn’t until 2009 when he was with the Vikings that he got the chance to play the Packers, going 2-0 against his former team that year. His first game against Green Bay was a 30-23 win by Minnesota, with Favre throwing for 271 yards, three touchdowns and no interceptions, an impressive 135.3 passer rating.

White’s decision to sign with the Packers in 1993 was one of the biggest in the NFL at the time, completely altering the look of the franchise in Green Bay. The Hall of Famer was arguably the best pass rusher in the league at the time, earning six straight All-Pro selections and seven consecutive Pro Bowl nods with the Eagles.

In his first game against Philadelphia, he made his presence felt by forcing two fumbles on Randall Cunningham, one of which came on a sack. He looked like his usually dominant self, wreaking havoc play after play in the Week 3 game on Sept. 12, White’s third game with his new team.

James has bounced around more than most superstars, going from the Cavaliers to the Heat, then back to the Cavs and eventually landing with the Lakers in 2018. The first time he left the Cavs was in 2010, which came on a TV special called “The Decision.” Cleveland fans were understandably upset when he decided to take his talents to South Beach, and they let him hear it on Dec. 2 during his first game against the Cavaliers.

The Heat crushed the Cavs, 118-90, led by James’ 38 points five rebounds and eight assists. James was booed and heckled by those in Cleveland for his decision to leave the city after seven seasons, making the All-Star team six times in that span. This performance in his first game back in Cleveland was a reminder of the superstar that he was.

Three days after being acquired by the Mets in a trade with the Giants, Mays suited up for his new team against San Francisco on May 14, 1972. Mays wasted no time showing his ability to his new fans in New York, homering in his second plate appearance against the Giants.

It was home run No. 647 in his career, and one of the most dramatic he hit, given the circumstances. He finished the day 1-for-2 with two runs scored, one RBI and two walks. He did strike out once and was caught stealing, but none of that overshadowed his timely home run for the Mets.

After 14 seasons in Indianapolis, the Colts parted ways with Manning during the 2012 offseason. Manning missed the 2011 season with a neck injury and the Colts were in line to draft Andrew Luck first overall. Manning signed with the Broncos and immediately turned them into contenders, reaching the Super Bowl twice and winning it all once.

He returned to Indianapolis to face the Colts on Oct. 20, 2013, putting up huge numbers in a losing effort against his former team. Manning threw for 386 yards with three touchdowns and one interception, but the Colts held on to win 39-33 behind Luck’s three touchdowns. Manning received a warm welcome from his supporters in Indianapolis, deservingly so after winning one Super Bowl with the Colts and making 11 Pro Bowls.

Rice began his career with the 49ers, playing 16 seasons with San Francisco where he established himself as the best receiver in football. Six times he led the league in receiving yards, also topping the NFL in touchdown catches six times. But he signed with the Raiders in 2001, keeping his career going at the age of 39 after being released by the 49ers.

On Nov. 3, 2002, he got the chance to face the 49ers and he put together a solid performance at 40 years old. He caught six of his eight targets for 74 yards. He and the Raiders lost 23-20 at home, however, thanks to Jose Cortez’s 23-yard field goal in overtime to give San Francisco the win.

Concerns about Brees’ shoulder led to the Chargers letting him walk in free agency in 2006, a decision that would haunt the franchise after seeing him make 12 Pro Bowls and win one Super Bowl with the Saints. It wasn’t until 2008 that he got to face the Chargers, a game that was played in London at Wembley Stadium.

Malone’s name is synonymous with the Utah Jazz, being the most decorated and successful player in the franchise’s history. He was a 14-time All-Star and All-NBA selection and won MVP twice, though he never won an NBA championship. That’s why he joined the Lakers in 2003 for his final NBA season in an attempt to win a title.

Malone faced the Jazz for the first time in his career on March 28, 2004, a game the Lakers won 91-84 in the heat of their march to the playoffs. Malone dropped 19 points and grabbed 13 rebounds in 34 minutes, working in tandem with Kobe Bryant, Shaquille O’Neal and Gary Payton. The Lakers lost in the NBA Finals that year, but Malone is still heralded as one of the best to play the game.

Montana won four Super Bowls with the 49ers and made the Pro Bowl seven times in 14 seasons in San Francisco. In 1993, the 49ers decided to trade him to the Chiefs, giving the future Hall of Famer a new challenge. He went 17-8 in two seasons with the Chiefs and was a Pro Bowler in his first season, proving he could still play.

His Chiefs played host to the 49ers on Sept. 11, 1994, beating San Francisco 24-17 in Week 3. Montana threw for 203 yards with two touchdown passes, including an 8-yarder to Keith Cash in the third quarter to give the Chiefs a 17-14 lead – a lead they would never relinquish.

When Faulk asked the Colts to renegotiate his contract before the 1999 season, Indianapolis responded by attempting to trade its three-time Pro Bowler. He wound up being dealt to the Rams, who immediately went on to win the Super Bowl in Faulks first season in St. Louis.

He built up his Hall of Fame resume with the Rams, making four Pro Bowls and rushing for 1,300-plus yards in each of his first three seasons. It wasn’t until Dec. 30, 2001 that he faced the Colts for the first time after the trade, and he put it on them. He rushed for 118 yards and three touchdowns, adding another 47 yards and one touchdown as a receiver. The Colts had no answer for him as St. Louis cruised to a 42-17 win.

After becoming an ace with the Red Sox from 1984-1996, Clemens headed North to Toronto, signing a four-year deal worth $40 million with the Blue Jays before the 1997 season. He won the Cy Young Award in his first season with the Blue Jays, winning a league-high 21 games with an MLB-best 2.05 ERA.

He dominated the Red Sox that year, too, pitching 23 1/3 innings and allowing just four earned runs in three starts against them. His first start against Boston came on July 12, a 14-3 win by Toronto. Clemens pitched eight innings of one-run ball with a season-high 16 strikeouts at Fenway Park.

Borque is best known for his career with the Bruins, making the All-Star Game 18 times with Boston. He was traded to the Avalanche during the 1999-2000 season, where he would finish the last year and a half of his career. He faced the Bruins for the first time on Feb. 21, 2001, which was during his final NHL season.

He had two assists in the game as the Avalanche thrashed the Bruins, 8-2 at home. His two assists came on back-to-back goals, which were scored by Milan Hejduk and Joe Sakic to give the Avalanche a 5-2 lead. Bourque and the Avalanche won the Stanley Cup in seven games that year, which was the final year of his decorated career.

Sanders upset a lot of fans in Atlanta when he chose to sign with the 49ers before the 1994 season after two All-Pro seasons with the Falcons. So, when he returned to Atlanta on Oct. 16, 1994, those at the Georgia Dome weren’t all that pleased to see him.

Sanders made an impact in his return to Atlanta, picking off Falcons quarterback Jeff George and returning it 93 yards for a touchdown to give the 49ers a 28-3 lead. He strutted down the sideline on his way to the end zone and let the Falcons sideline know about it, showing why he was the best cornerback in football at the time.

The NBA strategically scheduled Lakers-Heat on Christmas Day in 2004 after Shaquille O’Neal was traded to Miami for a massive haul, including Lamar Odom. That game on Christmas would be O’Neal’s first one since being dealt by the Lakers, and he helped lift the Heat to a narrow 104-102 win in L.A. He scored 24 points and had 11 rebounds, going 11-for-19 from the field with eight of his points coming in the fourth quarter.

He paired with Dwyane Wade in Miami and helped lead the Heat to the Eastern Conference Finals in his first season, once again leading the league in field goal percentage and averaging 22.9 points per game.