By Cameron Dasilva | Posted 14 days ago 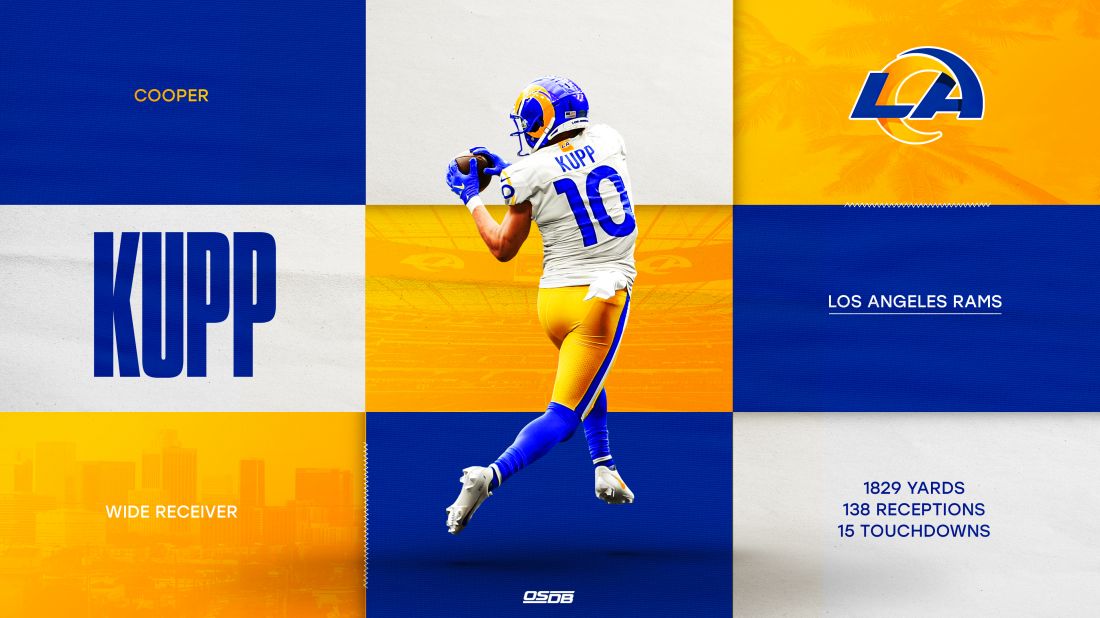 It’s been almost 10 years since a non-quarterback won NFL MVP. Adrian Peterson was the last to do it in 2012 when he rushed for 2,097 yards and 12 touchdowns, a season in which Drew Brees led the league with 5,177 passing yards and 43 touchdowns – but led the Saints to a 7-9 record.

LaDainian Tomlinson (2006), Shaun Alexander (2005) and Marshall Faulk (2000) are the only other running backs to win MVP since 2000, a clear sign of how quarterback-centric the award has become.

It wasn’t always this way, with Marcus Allen, Lawrence Taylor, Thurman Thomas, Emmitt Smith, Barry Sanders and Terrell Davis all winning it in the ‘80s and ‘90s, but with how pass-happy the game of football has become, it’s become almost impossible for anyone other than a quarterback to win MVP.

Cooper Kupp will be the latest example of that this year. No wide receiver has had a better season than Kupp in 2021. He leads the league in receptions (138), yards (1,829) and touchdown catches (15), seeking to become the first wide receiver to lead the NFL in all three categories since Steve Smith in 2005.

He’s 135 yards behind Calvin Johnson for the single-season receiving yards record and 11 receptions shy of Michael Thomas for the most catches in one year. Sure, Kupp has an extra game due to the new 18-week schedule, but even without the 17th game, he already ranks fifth in receiving yards, third in receptions and tied for 22nd in touchdown catches in a single season.

In 16 games, he put together one of the best seasons by a wide receiver. He’s the first player in NFL history with at least 130 catches, 1,800 yards and 15 touchdowns in a single season. That’s something Jerry Rice, Randy Moss, Larry Fitzgerald and Terrell Owens never did in their careers.

Yet, Kupp most likely won’t get enough votes to become the first wide receiver to win league MVP. That award will probably go to Aaron Rodgers or Tom Brady, who have had great seasons in their own right. But if Kupp can’t win MVP with the season he’s had, we may never see a wide receiver win it.

Brady has almost 5,000 yards and 40 touchdowns, which are deserving of MVP but he’s also played on an absolutely loaded team. Rodgers’ 35 touchdowns and four interceptions make for a mind-blowing ratio but he currently ranks ninth in passing yards (3,977).

Kupp leads all players in receptions, receiving yards and touchdown catches – and it’s not particularly close, either. The gap between himself and the next-closest receiver is substantial. He has 21 more receptions than Davante Adams, 320 more yards than Justin Jefferson and two more touchdowns than Ja’Marr Chase.

He’s the only receiver averaging more than 100 yards per game and no player in league history has matched his consistency. In 15 of the 16 games he’s played he had at least 90 yards and went over 100 yards 10 times. His worst game was a five-catch, 64-yard output against the Cardinals in Week 4.

His 15 games of 90-plus yards is an NFL record and one that’s probably not going to be touched for a long time, if ever. The same goes for his 12 consecutive games of at least 90 yards, three more than any other player in league history.

His numbers are obviously incredible, but he’s also had a huge impact in other ways that go unnoticed, Kupp has been used as a run blocker on 332 snaps. His grade in that department is 75.2, the highest of any player with at least 200 run-blocking snaps and third in the NFL among those with at least 100 such snaps.

Brian Baldinger shared a good breakdown of Kupp’s impact as a blocker, showing how he contributes in the running game just as much as he does when he’s catching nine passes a game.

.@RamsNFL @CooperKupp is the #NFL leading receiver in every category but he is an excellent blocker and a big part of their success both front side and backside cut-off blocks. #BaldysBreakdowns pic.twitter.com/ethdW1Vcbl

Not to mention, he’s like a coach on the field and on the sidelines. Sean McVay said after the Rams’ 20-19 win over the Ravens that Kupp actually suggested a play to him that resulted in a 35-yard gain to his teammate, Van Jefferson.

It was based on a coverage he recognized earlier in the game, seeing an opportunity for the Rams to exploit it with a deep post over the middle. How many receivers are making that suggestion in the middle of a game the way Kupp did?

“He’s the one that basically called the second half on the first drive – the 35-yard gain to Van Jefferson,” McVay told reporters. “He recognized they were playing a certain coverage. He put that thought in my head and that was in essence his play call. And that just goes to show you, the guy’s making plays every time he gets an opportunity but he’s also making suggestions because of the way he sees coverage contours, he understands the way that the back end is distributing to get us to some of the voids and vacancies. And who else is making suggestions on a 35-yard gain that played out exactly like he articulated to me at the end of the first half.”

Kupp’s biggest impact comes as a wide receiver, racking up yards week in and week out. He’s become Matthew Stafford’s favorite and most reliable target, and is making the most of his increased opportunities. But his real value to the Rams is all-encompassing with his blocking, collaboration with McVay and the attention he draws in coverage for being the best receiver in the NFL.

The Rams are 12-4 and in position to win the NFC West. They likely wouldn’t be in this spot if not for Kupp, especially after seeing Robert Woods go down with a torn ACL.

For a wide receiver, seasons don’t get much better than the one Kupp is currently enjoying. And in a year where no quarterback is going to throw 50 touchdown passes or set any records, Kupp deserves MVP consideration for MVP.

It might be now or never for the wide receiver position to finally win the coveted award.