Page: Who are the best players left on the free-agent marketplace? 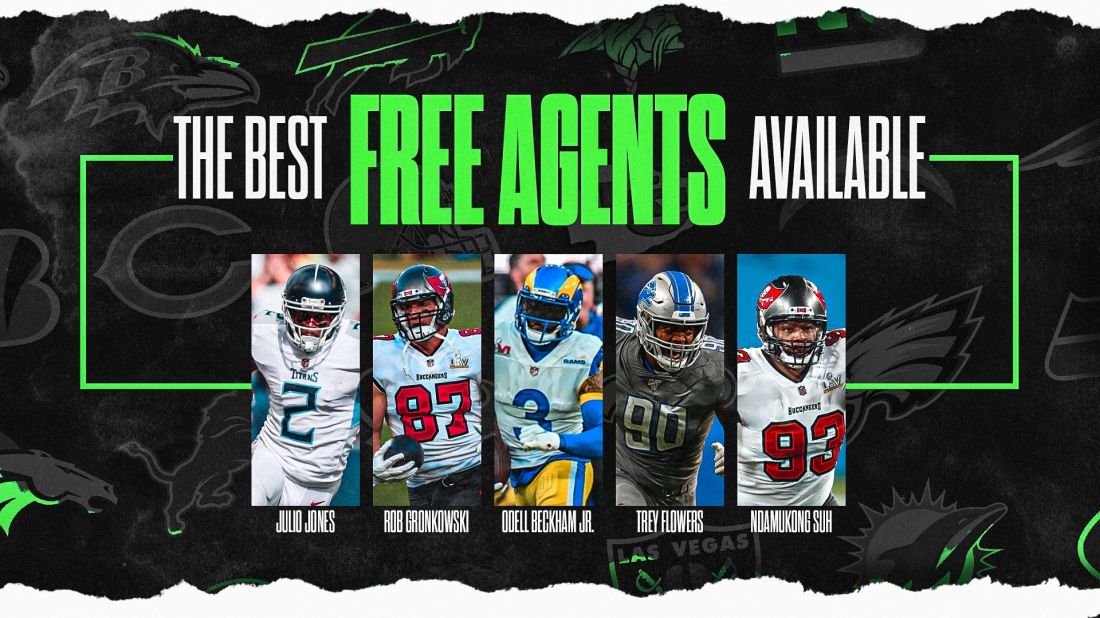 Most of the top free agents have already come off the market, now being two-plus months into free agency. However, there are plenty of quality players who can help any team seeking to improve its roster.

These players are all still available for one reason or another – whether it’s due to injury or being past their prime – but they can all be fringe starters with their new team in 2022.

Here are the best free agents still available at this point in the offseason.

With James Bradberry and Jadeveon Clowney recently coming off the market, Beckham is the best player available – and he might’ve been with those two included. What’s caused Beckham to go unsigned is his knee injury, which he suffered in the Super Bowl three months ago. That’ll likely sideline him for about half of the 2022 season, lessening the impact he’s going to have on whatever team signs him.

But before he got hurt in the big game in February, he was one of the Rams’ best players. He caught two passes for 52 yards and a touchdown in the Super Bowl, which brought his postseason total to 21 catches, 288 yards and two touchdowns in three-plus games. Beckham showed in Los Angeles that he can still be a very good No. 2 receiver, if not a go-to target in an offense.

Gronkowski turned 33, so he’s not the spry, young tight end he once was. Yet, even in his age-32 season last year, he caught 55 passes for 802 yards and six touchdowns in 12 games. Only five tight ends had more yards than Gronk, showing he can still contribute as a receiver.

Gronkowski has always been a good blocker, too, which is a critical part of playing the tight end position. That makes him a well-rounded player and someone who can contribute in both the passing game and running game. The biggest question is whether Gronk wants to continue playing.

Flowers signed a big-money deal with the Lions in 2019, and while he was a major help in his first year in Detroit, he’s done little in the two years since. He’s played seven games in each of the last two seasons, recording 3.5 total sacks and only 46 tackles with six QB hits.

Injuries have greatly hindered the former Patriots’ pass rusher, but he’s a versatile defensive lineman who can rush the passer and clog up running lanes. He’s still one of the better pass-rush options available this late into May.

If we were in 2018, there’s no chance Jones would be a free agent in late May. He was a perennial Pro Bowler from 2014-2019, topping 1,300 yards in each of those six years. But at this point in his career, Jones has struggled to stay healthy, playing a total of 19 games in the last two seasons. He had his worst season as a pro in 2021, catching only 31 passes for 434 yards and one touchdown in 10 games – all career-lows for the two-time All-Pro.

But if he can stay healthy and come close to the way he was playing prior to an injury-plagued 2019 season, Jones can put up 1,000-plus yards and be a real threat in the red zone with his size and leaping ability.

Hicks has been underrated for a long time, even with the dominance he’s shown on the interior while playing for the Bears. In only nine games last season, he had 3.5 sacks and nine QB hits, winning battles on the interior with opposing linemen.

He also had 15 total pressures and earned an overall grade of 72.3 from Pro Football Focus, which was among the best for a defensive tackle. Despite being 32 years old, Hicks can still help a defensive line that’s in need of a run stopper and big man who can rush the passer – and there probably isn't a team in the NFL that couldn’t use a player like that.

Brown played 965 snaps at left tackle last season and allowed just 33 pressures. He’s the best offensive tackle available, even at the age of 36. Any team that signs him knows he’s going to be on the field on Sundays, considering he’s only missed four games in the last four years.

A Pro Bowler last season, Brown gave up only eight sacks, which isn't many considering how bad the Seahawks offensive line as a whole was in 2021. His 71.5 overall grade from Pro Football Focus was one of the best for an offensive tackle, and there’s no reason to think he can't have a similar season in 2022.

There aren’t many centers who are better in pass protection than Tretter, which makes it puzzling that he’s still available. He started 16 games for the Browns last season and only allowed one sack with five penalties committed, which are incredible numbers for any offensive lineman.

Tretter was a solid run blocker, too, earning a grade of 74.8 in that category from Pro Football Focus. He is 31 years old, so he’s not going to be a long-term solution for a team that’s looking for a five-year starter at center, but as a stopgap solution, it doesn’t get any better than Tretter at this point in the offseason.

It’s incredible that Fisher was able to play as much as he did last season after suffering a torn Achilles in January of 2021. He started 15 games for the Colts, only allowing seven sacks and excelling as a run blocker (73.3 PFF grade).

The former No. 1 overall pick was a big part of the Colts’ dominant offensive line, stepping in seamlessly after spending eight years with the Chiefs. Fisher should be a starting left tackle somewhere in 2022, even if he just takes a one-year deal to help a team that needs help at a key position.

Even though he hasn’t been a Pro Bowler since 2016, Suh has helped the Rams and Buccaneers since leaving Miami, playing integral roles on their defensive lines as the starting tackle. Even at 35 years old, Suh moves well and plays with an edge, like he always has.

Williams is a versatile offensive lineman who has had some really good seasons in pass protection. Last year with the Bills, he split time at right guard and right tackle, allowing a total of just four sacks in 17 starts. He did give up 40 pressures, but for a guy who played two different positions, he was a solid player for Buffalo.

He’ll turn 30 in August so he’s one of the younger options on the market, and he has plenty of experience after making 74 starts in his first seven seasons. Any team that signs him will be getting a player who can help at multiple spots.

Hightower was once again a leader for the Patriots last season, starting 15 games and making 64 tackles with 1.5 sacks. It would make sense for the Patriots to bring him back, but he’s someone who can impact a defense regardless of scheme.

Missed tackles and coverage were weaknesses of his game last season, allowing 34 catches on 36 targets with 10 missed tackles, but he often finds the ball whether he’s aligned inside or at outside linebacker.

Joseph was surprisingly effective as a pass rusher last season, registering 16 total pressures on 252 pass-rush snaps, according to PFF. He had one sack, two QB hits and 57 total tackles in 14 games, continuing his dominance on the interior as a big nose tackle in the middle.

He’s a two-time Pro Bowler and fits either a 4-3 or 3-4 scheme, making him an option for several teams in the market for defensive line help.

Barr isn't the Pro Bowl linebacker he once was from 2015-2018, missing significant time in the last two years, but the versatile skill set is still there. He can run, cover and rush the passer, recording 72 tackles and 2.5 sacks in only 11 games with the Vikings last year.

Just know that when you sign Barr, there’s a decent chance he’s going to miss time, as he has in each of the last four years. But when he’s on the field, he can be used in a variety of ways at linebacker.