Page: Numbers switch add up for Puppies Behind Bars foundation

Numbers switch add up for Puppies Behind Bars foundation

By Cameron DaSilva | Posted 16 days ago 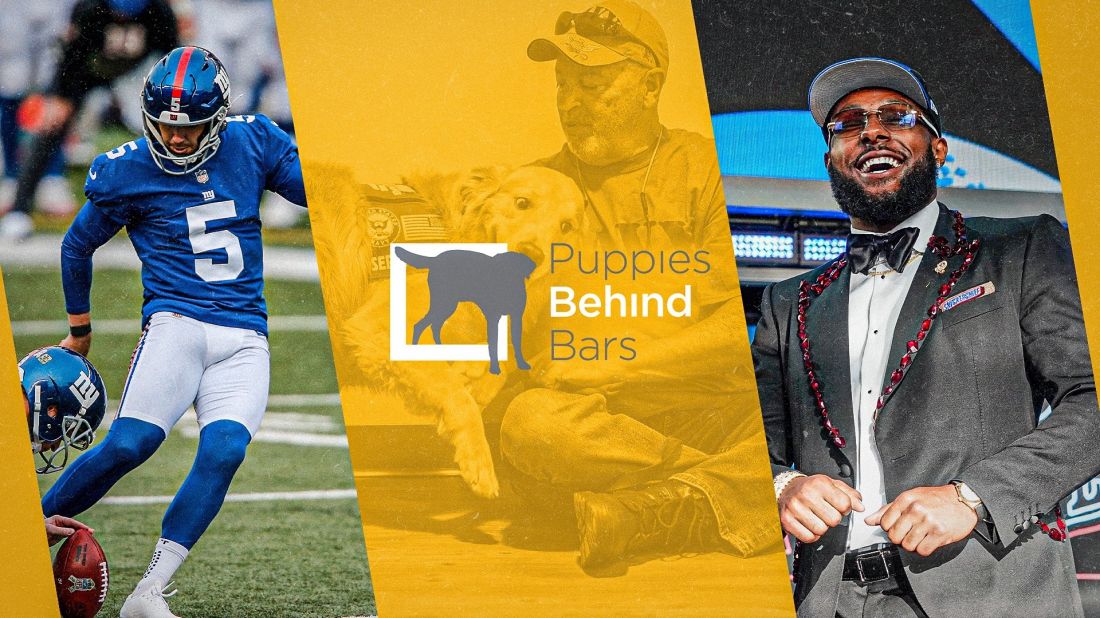 How much is a number worth?

That’s a question a lot of NFL players ask themselves when they join a new team and weigh the possibility of buying a jersey number off their new teammate. That’s exactly what New York Giants rookie Kayvon Thibodeaux did after he was selected fifth overall this year.

At Oregon, Thibodeaux wore No. 5, and thanks to rules put in place by the NFL last season, defensive players are allowed to wear single-digit numbers. The only problem was that veteran kicker Graham Gano occupied No. 5 after wearing it last year with the Giants.

Rather than paying six figures or buying Gano a new car, the Giants players agreed on something much better. Thibodeaux donated $50,000 to Puppies Behind Bars, which is an organization headquartered in New York that trains and provides service dogs to first responders and wounded war veterans.

“When he said he was willing to give to that, I can be No. 9 and maybe in 10-15 years when he retires and I’m still kicking, I can get No. 5 back,” Gano told the Giants’ website. “The opportunity to give to something is exciting, and the number is obviously very special to Kayvon. While it is special to me as well, there’s a whole lot of meaning in that No. 5 to him. I just wanted to be a good teammate and also be able to support others throughout the whole process.”

The sizable donation was a pleasant surprise for Puppies Behind Bars. Executive Vice President Eric Barsness said the organization knew about Thibodeaux’s gesture a few days before the news was made public, and when he learned of it, he couldn’t have been more grateful for the rookie’s donation.

“It was just extremely exciting,” Barsness told OSDB Sports via phone. “The Giants as a team have been very supportive of our work. They’ve invited us to bring dogs – and first responders and veterans that have been paired with our dogs – to games.

“We were already grateful to the organization, and what a great guy. We were thrilled that he was aware of us and excited about our work. It’s a lot of money and great visibility from one of New York’s teams, from an athlete who’s a great guy.”

The donation will help provide veterans and first responders with support dogs, but Thibodeaux’s act of kindness will also help Puppies Behind Bars in another way. It’s raising awareness for their work, and will hopefully lead to not only additional donations from those who want to support the cause, but also encourage first responders and wounded veterans to apply for the program, too.

“It makes people aware of our work and gives us a whole new audience,” Barsness said. “Hopefully they’ll be encouraged to check out the website and maybe make a donation. It also tells potential clients that we’re available. First responders who have been injured, veterans who have returned with war wounds. They learn they could apply.”

From the organization’s website: “Puppies Behind Bars (PBB) trains incarcerated individuals to raise service dogs for wounded war veterans and first responders, as well as explosive-detection canines for law enforcement. Puppies enter prison at the age of 8 weeks and live with their incarcerated puppy-raisers for approximately 24 months. As the puppies mature into well-loved, well-behaved dogs, their raisers learn what it means to contribute to society rather than take from it.”

For Gano, he’s not emotionally attached to the number 5, and he’s happy to see Thibodeaux donate the money he would’ve paid for the number to a deserving organization that’s helping the community.

"I feel like it was where the money that Kayvon was donating would be able to make the largest impact and help the most people throughout him giving that money," Gano told Dan Salomone of Giants.com. "The whole idea behind the number five being special to myself and being special to Kayvon was being able to help five people get the five dogs and be able to make an impact in five people's lives for the better. That was the whole goal behind that. I'm really excited about it."

As an added bonus for Gano and his family, Gano’s kids will get to name five puppies that will be honorary sponsorships on behalf of Thibodeaux’s donation for “buying” the number from the Giants kicker.

Being located in New York, Puppies Behind Bars has close ties to the Giants. Not only have their dogs and paired owners been invited to Giants games, but many of their clients are Giants fans – from within the NYPD and nationwide.

“Our clients are nationwide but we have a strong base of volunteers and supporters, and veterans and first responders – and it’s very much a Giants fan crew,” Barsness said. “We work with NYPD, they have three of our dogs who work in officer wellness. Those officers tend to be big Giants fans.”

Barsness believes Puppies Behind Bars will be invited to have some of their dogs at a Giants game again in the future, thanking the team for their support over the years.

“The team has always been so generous in those circumstances,” he added. “The veterans and police and EMT officers who come with the dogs have been guests of the team.