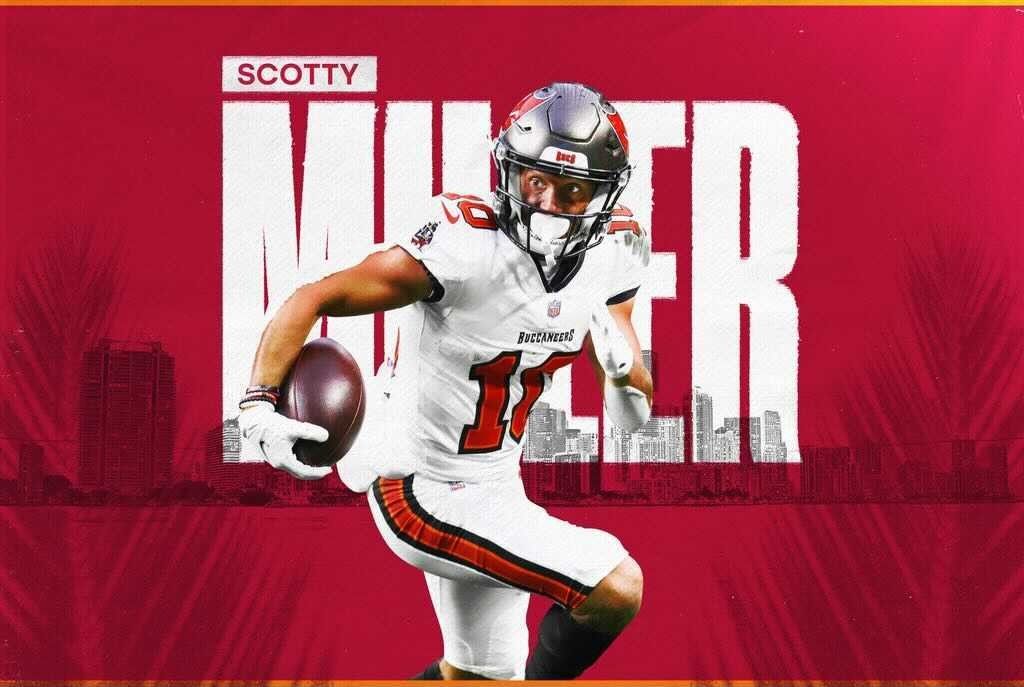 Three years ago, Scotty Miller was a star receiver at Bowling Green University. Three weeks ago, he was meeting the President of the United States at the White House, a member of the Super Bowl champion Tampa Bay Buccaneers.

Neither meeting the president nor playing in the NFL, was an assumption many pundits were willing to make during the 23-year-old Miller’s football progression from Pee-Wee to FBS.

But the 5-foot-9 wide receiver -- whose amazing touchdown catch in the NFC Championship essentially insured the Bucs a place in the Big Game -- has always known his hard work, natural talent and unwavering belief could produce tremendous things when given a chance.

“It’s been amazing, a wild journey, a wild ride,’’ Miller told OSDB recently. “It’s been humble beginnings my whole life really from youth football to high school to college. Always being overlooked, I always thought I was deserving of more and not really getting the recognition.

It’s not lost on Miller that his quarterback in Tampa, Tom Brady, was a sixth-round draft pick just like him. Miller was the 208th overall selection in 2019, coming out of the Mid-American Conference. Brady, who played at the University of Michigan, was taken 199thoverall in 2000.

And both -- at opposing ends of their career -- have always been determined to prove those earliest doubters wrong. One is considered the best quarterback in the history of the NFL; the other determined to follow that same path to success, soaking up all the inspiration and hard-knocks lessons coming his way.

“I always keep a chip on my shoulder,’’ Miller explained. “Tom [Brady] was saying just last night that he’ll never forget being drafted in the sixth round and I take that same approach every single day.”

It’s one that has paid off. A couple days after meeting President Joe Biden and receiving the Buccaneers’ custom-made Super Bowl ring, Miller was still energetic about these once-in-a-lifetime experiences and opportunities.

“You always wonder what it looks like inside [the White House] and just being able to walk around and talk to people in there about all the historical objects in there, was just awesome,’’ Miller said. “Then to stand up there during the ceremony and get to meet the President of the United States, things you dream of being able to do and all of a sudden, you’re doing it … definitely an experience I’ll never forget.”

As for the ring, it’s a unique design that includes 319 diamonds and a miniature version of Raymond James Stadium, where the Bucs call home. The diamond count is a nod to the Bucs’ 31-9 victory over Kansas City in Super Bowl LV. 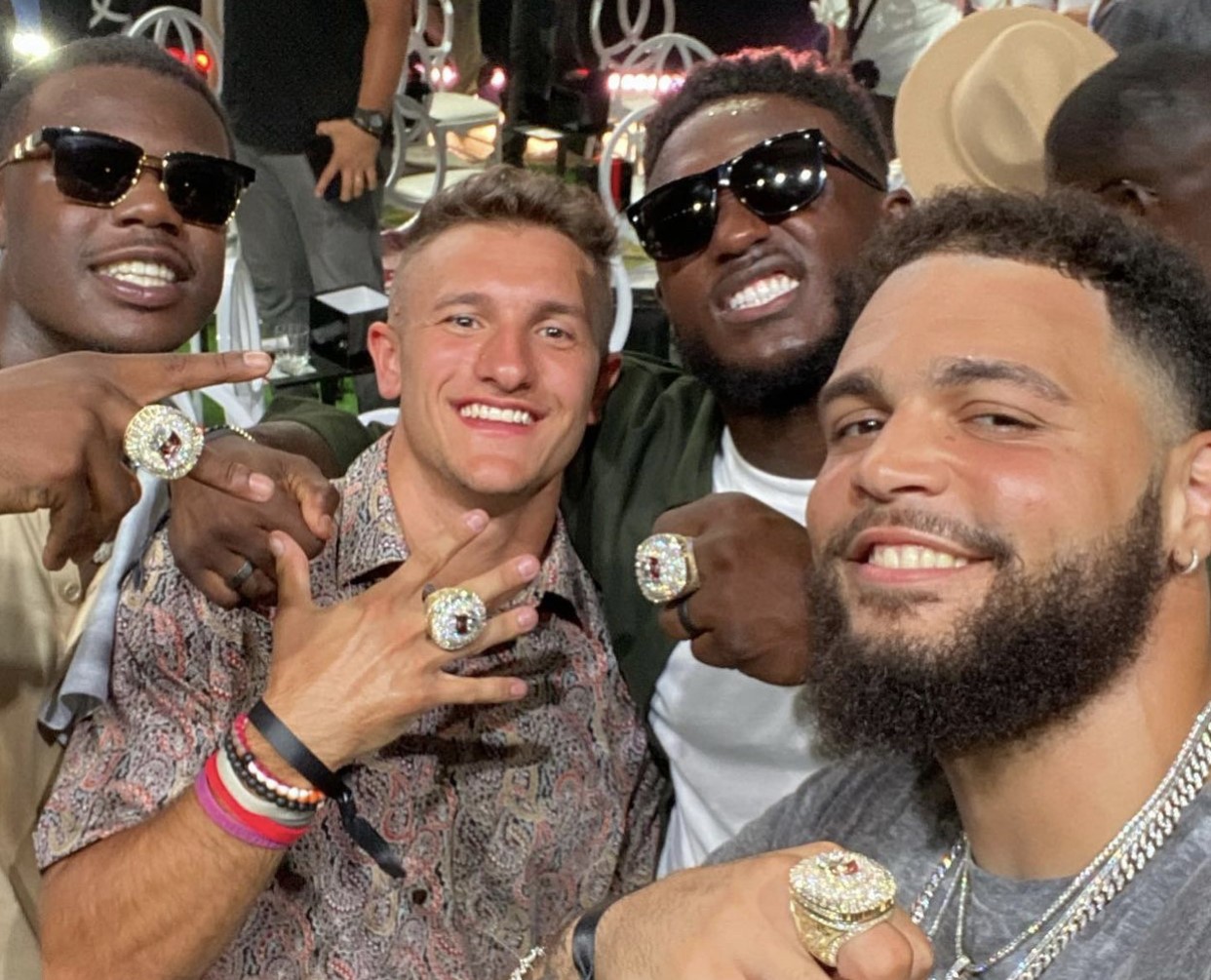 “We were just shocked at how amazing it is and all the details and diamonds,’’ Miller said. “All the people that had a hand in designing it did a phenomenal job. I can’t even believe it. It’s massive too. No one’s going to miss it.”

It’s a perfect “Welcome to the NFL” symbol for Miller, who has proudly used his platform not just for endorsements deals -- he has those for Celsius water, Neiman-Marcus and Ridge Wallets -- but to make a difference in the Tampa community.

He has worked with Feeding Tampa Bay, which was never more vital than in the last year and a half with COVID-19 unemployment effects resulting in so many families needing help.

Without question, Miller’s heart is open to helping. It’s something he learned early in life. Miller’s cousin Jake Westerman was born with Cerebral Palsy and has used a wheelchair all his life. When the Bucaneers participated in “My Cause My Cleat” last season, Miller happily and proudly made sure to put Jake’s name on his cleat.

“I grew up close to him and his family; his mom and my mom are sisters and still very close so I grew up seeing him all the time,’’ Miller said “So when we did ‘My Cause, My Cleat,’ ” I was fortunate to put his name and the foundation he’s a part of on my cleat.

“I love to give back and help people like that.

“With COVID It’s been a tough year for everybody, people losing jobs and not being able to provide for their family like they want to,’’ Miller continued. “We got to play our whole season and be paid like we normally do, so we were a lot more fortunate than most. So, any way we can help people who were struggling, or still are, it’s good to help.”

It’s been a tenure of good feelings in Tampa for Miller, who is humbled and grateful to have won a championship in his second season in the league -- and to have played an important part in accomplishing that. The future, for Miller and for the Bucs, is as bright as the new Super Bowl ring.

“Nothing comes easy, but definitely it was a lot different when Tom came in. You play a lot more primetime games - way more nationally televised games. He made everything a little different. But as an athlete you’ve got to love the moment, love the spotlight, so it’s been a cool experience.

“The mentality now is to win,’’ Miller said. “That especially sunk in when Tom showed up. Tom said, ‘I’m not used to losing.’ That’s not acceptable for him and shouldn’t be for anyone.

“Expectations changed and every time we touch the field on Sunday, the expectation is to win the game.”