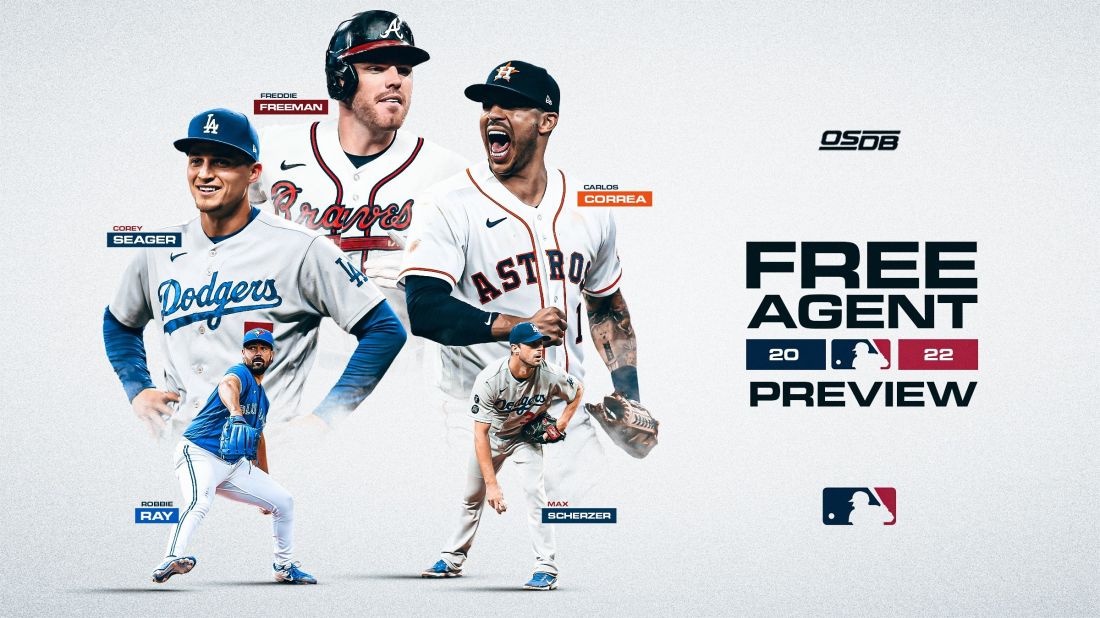 There is a ton of uncertainty around MLB because the labor talks have been going on for months and it seems like there will be a lockout once the CBA expires on Dec.1. It is impossible to predict how aggressive teams are going to be when targeting free agents in an uncertain market. The pending labor agreement hasn’t slowed-down some teams (mainly major-market teams) from being active in the early days of free agency -- seven players (six pitchers) have already been signed.

José Berríos signed a seven-year $131-million contract extension with the Blue Jays. Berríos was eligible for salary arbitration and would not have reached free agency until 2023.

The qualifying offer is a set amount of money in any given year that a team can offer a player on their roster who is a pending free agent. The qualifying offer for the upcoming 2021-’22 MLB free agent class is $18.4 million. It’s a slight decrease from the $18.9 million figure last winter -- reflecting teams reducing payroll.

Any team that signs a player who rejected a QO will lose a draft pick. If a free agent accepts the QO, they are never eligible to receive it again. Wednesday, Nov. 17, at 5 p.m. ET marked the deadline for the 14 players who were tendered a qualifying offer -- a one-year deal for 2022 worth $18.4 million.

Only one player, 1B Brandon Belt, accepted the QO this year. From the time the system was implemented in 2012, only 11 of the 110 players to receive a QO accepted it.

MLB free agency is loaded with plenty of tantalizing, young talent and future Hall of Fame pitchers who are still throwing at an elite level. The shortstop position is especially loaded in this year's free agency market -- the top-three players on my list are all shortstops.

The ages listed below is the age of the player on the first game of the 2022 season.

Already a World Series champion and still in his prime, Correa tops the list. His only major downside is that he has not been able to stay healthy enough to put together a full season since 2016. But, 2021 helped changed that narrative when he played in 148 games and ranked third at his position in FanGraphs’ Wins Above Replacement (5.8). Correa posted a .850-OPS and he led the MLB in Defensive Runs Save (21). Correa is in line to receive one of the largest contracts in the MLB and his contract should set the bar for the rest of the shortstops in the market.

Seager helped lead the Los Angeles Dodgers to their first World Series title in 32 years by winning NLCS MVP and World Series MVP in the process. The 27-year-old would have topped this list but he was injured for most of last season and played in 95 games. He has dealt with an array of injuries but his career .870-OPS and 23.7-fWAR through 636 games tells you how talented and productive he is when healthy. His 132 wRC+ plus mark is the best of any shortstop with at least 2,000 plate appearances since his 2015 debut. The Dodgers’ midseason acquisition of SS/2B Trea Turner could impact their approach to Seager’s free agency. Seager will undoubtly be one of the MLB’s highest paid players next season.

Semien, like many players, struggled in the shortened-2020 season, which led to him signing a one-year, prove-it-contract with the Blue Jays. Semien’s bet on himself getting back to form will definitely pay off after an MVP-caliber season where he set an MLB-record for home runs by a second baseman (45) and posted a 6.6 fWAR. Now, at the age of 31 he is a fantastic prospect for any team that needs a middle-infielder that can hit for power.

Even at the age -of 37 Scherzer, a three-time NL Cy Young winner, will be the most sought after pitchers. His 2.46 ERA and Major League-best 0.86-WHIP across 30 starts for the Nationals and Dodgers are proof that he’s still got it. Since joining the Dodgers, Scherzer was 7-0 with a stellar 35.1%-strikeout rate and an outstanding 2.08-ERA. A great addition to any clubhouse, the future Hall of Famer brings a lot more to a team than nasty stuff on the mound.

Bryant’s career has been a bit of a rollercoaster. After he won the 2016 NL MVP in his second-full-season he was widely considered one of the best overall players in the league. He followed his MVP season with another stellar season with the Cubs in 2017. Since, Bryant has not been able to get back to those type of numbers. Last season Bryant posted a .324/.406/.611 with 12-home runs and a 1.016-OPS in the first 50-games. Then Bryant went cold posting .191/.296/.362 with a .658-OPS in the next 43 contest before getting traded to the Giants. The Giants will try to bring him back as a middle-of-the-order threat (.843 OPS over the last four seasons) and a solid-versatile-defender.

Freeman has played his entire career with the World Series champs Atlanta Braves and has been a consummate pro. Freeman has not had a wRC+ mark lower than 132 or an OPS lower than .841 in any of the last nine seasons. A five-time All-Star selection and 2020 NL MVP will have a lot of interest on the open market. The Braves and Freeman’s camp tried to work out an extension all year but failed to come to an agreement. The Braves will be doing everything in their power to try to bring back their franchise player and not let him go to a contender.

It suprised many baseball fans that Story was not dealt before the trade deadline last season. Now that the season has ended the two-time All-Star will most likely never be putting on a Rockies jersey again and Colorado will only receive a compensatory pick once he signs with another team. Story had a down year as he played through an elbow injury on one of the worst teams in the MLB. Story a rare mix of power and speed, hit for 20+ home runs and had 20 stolen bases, in are year people called a down year. The six-year-pro has shown how special he can be and will have many teams lining up for his services this winter.

Similar to his teammate Marcus Semien, Robby Ray signed a one-year, prove-it-deal with Toronto in 2020. The Blue Jays got way more than what they paid for as Ray went on to win the 2021 AL Cy Young Award (Ray received 29 of the 30 first-place votes). Ray had a marvelous first full season with the Blue Jays, throwing a league best 193 1/3 innings while leading qualified pitchers in ERA (2.84), ERA+ (154), WHIP (1.05), and WAR (7.6). At 30-years-old, Ray will be able to get a mid-length contract that will pay him big bucks.

After accepting the Mets’ qualifying offer on the heels of a lost 2020, Stroman delivered 179 innings with a 3.02-ERA, a 133-ERA+, a career-best 21.7%-strikeout rate in 31starts last season. The 31 starts in 2021 meant that Stroman has made 30-plus starts across four of his last five seasons. Many teams will be trying to add the RHP to their clubhouses because he is one of the most durable and consistent starters on the free-agent market. Any team that wants to sign Stroman will not have to forfeit a draft pick -- since Stroman accepted the QO last season -- giving Stroman’s agent extra leverage in the contract negotiations.

Gausman is another pitcher who took the qualifying offer last season instead of testing the open market. The one-year contract with the Giants allowed Gausman to prove his worth and eliminate a loss of a draft pick for any team that may want to sign him. The RHP delivered a truly fantastic 2021, with a 2.81-ERA, a 145-ERA+ and a 1.04-WHIP in 192 innings over 33 starts. As one of the best pitchers in the first half of the season Gausman was selected to the All-Star team. He regressed a bit during the second half of the 2021 season, but that should not stop Gausman from receiving a huge contract.