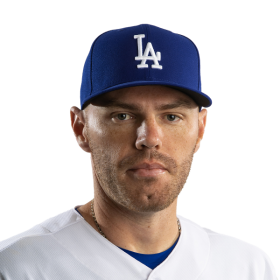 From the beginning of his career, Freeman has made a mission of preaching the importance of skin care. He annually partners with the Melanoma Research Foundation (MRF) to raise awareness about melanoma and highlight the ways people can reduce the risk of developing this disease.

He teamed up with the American Cancer Society for the Cover Your Bases program. Cover Your Bases impacts local communities and helps save lives by educating fans about key cancer prevention tips around eating healthy, staying active, sun safety, and cancer screenings. This is something that is extremely important to me personally. My mother Rosemary died of melanoma when I was just 10 years old, having an indelible impact on my life. For her, and for families and individuals across Braves country, I’m proud to join this campaign to help save lives. Many of the millions of skin cancer cases diagnosed annually could be prevented by protecting skin from excessive sun exposure. Our goal is to educate as many Braves fans as possible about the importance of sun safety, including having 10 sunscreen stations throughout SunTrust Park. With Cover Your Bases we will assist the Society in achieving its mission of saving lives, celebrating lives, and leading the fight for a world without cancer.

get involved
The Giving Kitchen

Freddie Freeman and a group teammates did just that as the team kicked off Community Heroes Week. Freeman was flanked by catcher Kurt Suzuki, reliever Jason Hursh and led in by the Braves drumline. The beating of drums alerted Jen Hidinger that her Monday lunch of running the Helpful Hotdog cart at Ponce City Market was going to be different. Hidinger is one of the founders of The Giving Kitchen, non-profit that serves peace of mind to workers in the Atlanta restaurant community who are facing unanticipated crises. Hidinger started the charity when her husband Ryan was diagnosed with terminal cancer. Ryan was known for his work as a chef for Bacchanalia, Floataway Café, and Muss & Turner’s.

The Salvation Army, an international movement, is an evangelical part of the universal Christian Church. Its message is based on the Bible. Its ministry is motivated by the love of God. Its mission is to preach the gospel of Jesus Christ and to meet human needs in His name without discrimination.

We work with more than 700 nonprofit partners—including food pantries, community kitchens, childcare centers, shelters and senior centers—to distribute over 67 million meals to more than 1 million people estimated to be food insecure due to COVID-19 in 29 counties across metro Atlanta and north Georgia. We are a member of Feeding America, the nation’s leading domestic hunger-relief charity.

get involved
Children's Healthcare of ATL

When it comes to caring for kids, we’ve never settled for just good enough. We need your help—now more than ever—to give our patients the futures they deserve.

Rally Foundation for Childhood Cancer Research, a 501(c)(3) nonprofit, empowers volunteers across the country to raise awareness and funds for childhood cancer research to find better treatments with fewer long-term side effects and, ultimately, cures. Rally is an international children’s cancer foundation funding pediatric cancer research across the country and worldwide.

Donations here will help neighborhoods along Gulf Coast, people in Haiti, and communities around the globe prepare, respond, and recover from disaster.

Freeman attended El Modena High School in Orange, California where he was a third baseman and a pitcher. As a senior in 2007, Freeman hit for a .417 batting average and had a 6–1 win-loss record as a pitcher. The Orange County Register named him its 2007 player of the yea...

Freeman attended El Modena High School in Orange, California where he was a third baseman and a pitcher. As a senior in 20...

Freeman attended El Modena High School in Orange, California where he was a third baseman and a pitcher. As a senior in 2007, Freeman hit for a .417 batting average and had a 6–1 win-loss record as a pitcher. The Orange County Register named him its 2007 player of the year. He signed a letter of intent with Cal State Fullerton.

The Atlanta Braves selected Freeman in the second round, with the 78th overall selection, of the 2007 Major League Baseball draft. Freeman signed with the team for $409,500, foregoing his college scholarship. He was the Braves' fifth-best prospect heading into the 2009 season, according to Baseball America, and the 11th-best prospect overall in their mid-season top 25.

Freeman was called up to the Braves on September 1, 2010, as part of the team's September call-ups, and made his major league debut that same day. On September 5, 2010, he got his first career hit off of Florida Marlins pitcher Clay Hensley, and on September 21, 2010, he hit his first home run off of Philadelphia Phillies pitcher Roy Halladay.

Freeman began the 2011 season as the starting first baseman for the Braves. After a slow start, his performance improved and he had been mentioned as a strong candidate for rookie of the year. On July 4, 2011, Freeman hit two home runs against the Colorado Rockies, for his first multi-home run game. Freeman was the first Braves rookie to reach 50 RBIs by July 18 since Hank Aaron accomplished this feat in 1954. He was the named NL rookie of the month for July; during that month, Freeman led all Major League rookies with 38 hits, a .362 batting average, and a.433 on-base percentage in July 27 games. He also led all NL rookies with six homers and 17 runs. His 18 RBIs tied for the most in the NL among rookies.

In August, Freeman and Dan Uggla became the first members of the Braves to have concurrent twenty-game hitting streaks in the modern era. Freeman's streak ended at 20 games on August 7. Freeman finished the 2011 year batting .282 with 32 doubles, 21 home runs, and 76 RBI in 157 games played.

Freeman finished second to teammate Craig Kimbrel in the NL Rookie of the Year balloting. Kimbrel and Freeman were the first teammates to finish first and second since 1989, when the Chicago Cubs’ Jerome Walton and Dwight Smith came in first and second. The only other time two Braves finished in the top five, the organization was still located in Milwaukee—Gene Conley was voted third-best rookie of the 1954 season; Hank Aaron came in fourth.

In 2013, Freeman was selected as a finalist for the 2013 Major League Baseball All-Star Game Final Vote, where he won with a record-setting total of 19.7 million fan votes, but was unable to play because of a thumb injury suffered three days prior to the game. Freeman finished the 2013 season with a .319 batting average, along with 23 homers and 109 RBI in 147 games played. He finished 5th on the National League Most Valuable Player award voting.

On February 4, 2014, Freeman agreed to an eight-year, $135 million extension. Freeman was named an All-Star for the second time in 2014, and played the last three innings of the game. He led the team in batting average and on base plus slugging percentage in 2014. Freeman also set a franchise record for innings played. During a game against the Philadelphia Phillies on June 27, 2014, Freeman hit a three-run homer off of Kyle Kendrick to left center field that was caught by broadcaster Tom McCarthy. Freeman finished the 2014 year by appearing in all 162 games batting .288 with 90 walks, 43 doubles, 18 home runs, and 78 RBI.

Freeman drew attention for his offensive production throughout the first half of the 2019 season, especially in the month of June. At midseason, Freeman was selected the National League starter at first base in the 2019 Major League Baseball All-Star Game. The appearance was his second consecutive start in the game and his fourth All-Star Game selection overall.

Freeman hit his first career grand slam on September 4, 2020, in the second game of a doubleheader against the Washington Nationals off pitcher Tanner Rainey. Two days later, he hit another grand slam, against Nationals pitcher Kyle Finnegan. On September 9, Freeman reached 1,500 career hits with a home run. During that same game against the Miami Marlins, he set a career-high by driving in six runs.

Freeman finished the shortened 60-game regular season hitting .341/.462/.640 with 13 home runs and 53 RBIs. He led the major leagues with 23 doubles and 51 runs scored. Freeman's offensive performance won him a second Silver Slugger Award. He was named the NL MVP, becoming the first Braves player to win the award since Chipper Jones in 1999. Freeman was also voted the Baseball Digest MLB Player of the Year, Baseball America Player of the Year, MLBPA Player's Choice Player of the Year, and MLBPA Player's Choice NL Outstanding Player. Freeman was awarded the 2020 National League Hank Aaron Award, becoming the second player in franchise history to win the award, following Andruw Jones in 2005.

On August 18, 2021, Freeman hit for the cycle against the Miami Marlins. This was the fourth time an Atlanta Braves player had ever done so, the second time Freeman has done it, and only the ninth time in Braves' history. His second career cycle improved his batting average to .301. Freeman finished the 2021 season with a .300 batting average, a .896 OPS, and 31 home runs. The 2021 Braves became the second team in Major League Baseball history to have each starting infielder hit at least 25 home runs in a season. On October 12, 2021, Freeman hit an eventual game-winning solo home run in the bottom of the 8th inning in a tied National League Division Series game 4 against the Milwaukee Brewers. This home run in what was previously a 4-4 ballgame allowed the Braves to advance to the National League Championship Series for the second consecutive year.

Freeman was named the National League's starting first baseman for the 2021 All-Star Game. 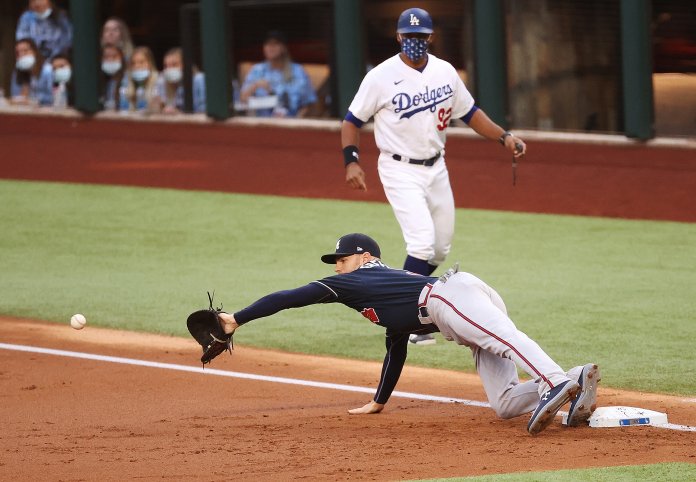 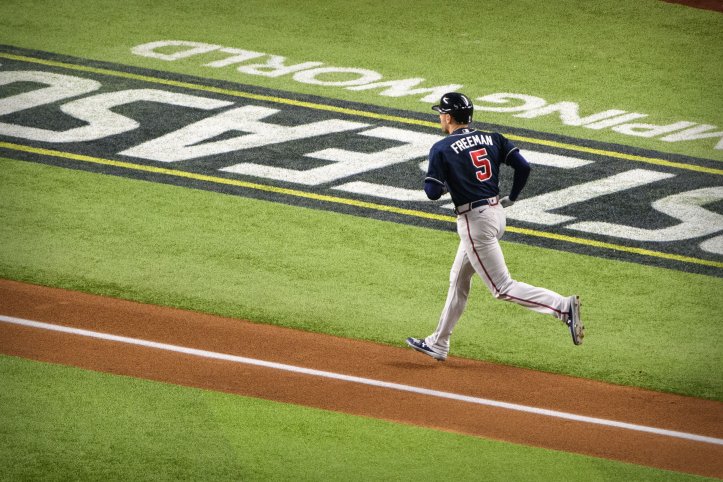 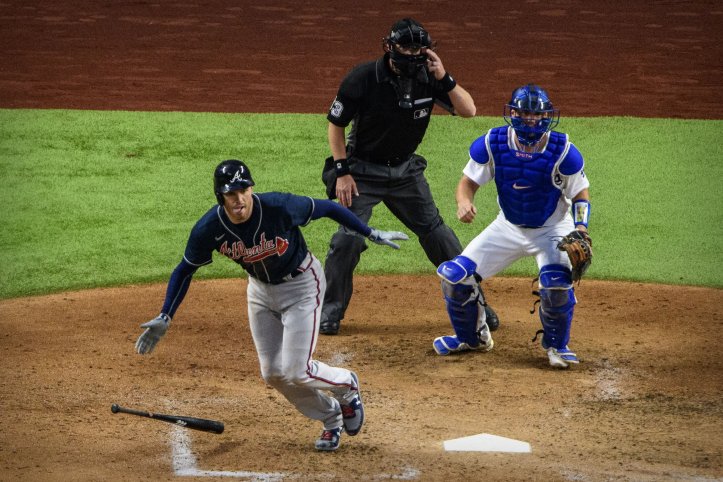 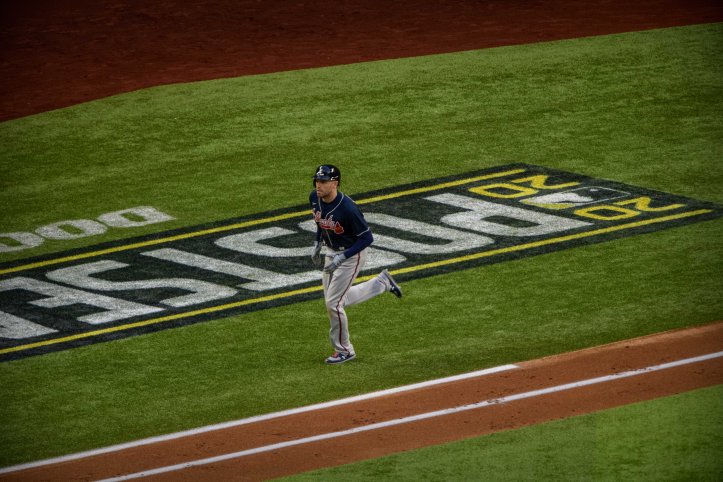 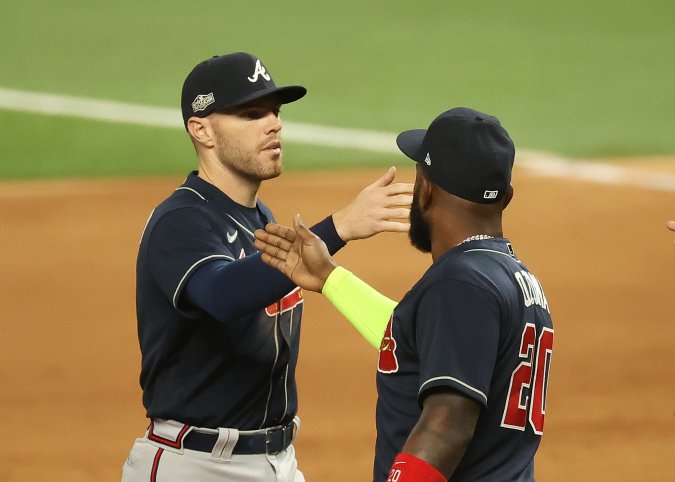 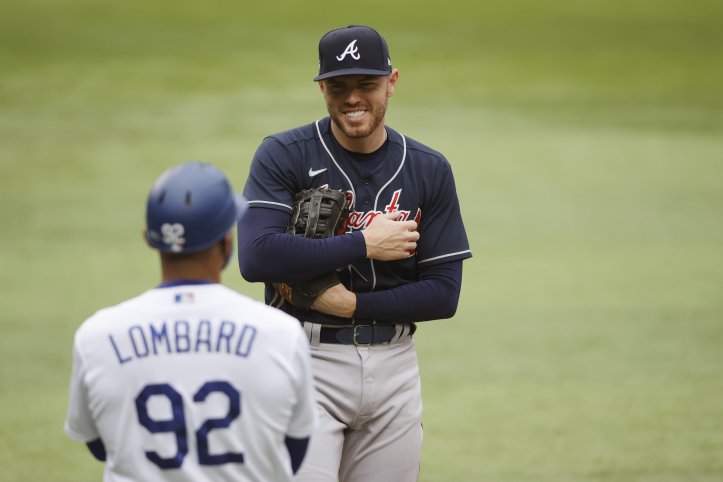 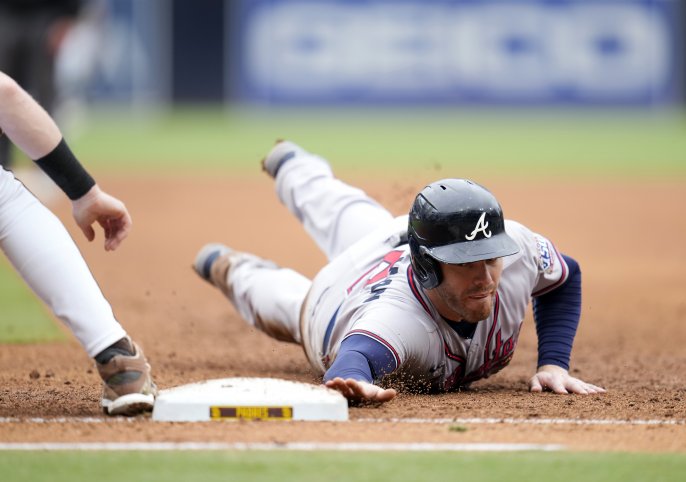 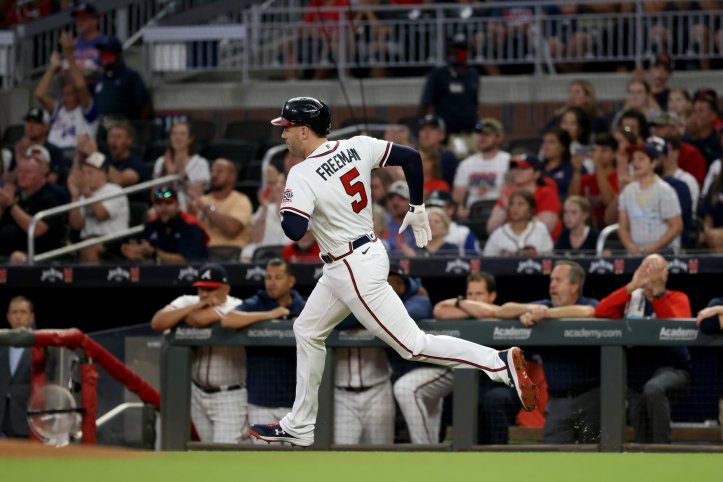