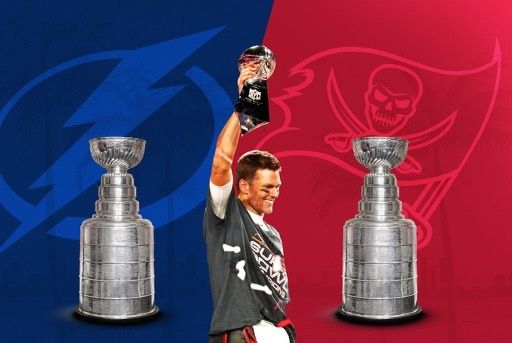 TAMPA  -- Not even Hurricane Elsa, which moved through the area hours earlier, could dampen the spirits or deter the celebrations for Tampa Bay Lightning fans Wednesday night as they gladly braved the storm’s aftermath to cheer on their hockey team as it won its second consecutive Stanley Cup.

The Lightning’s Amalie Arena played host to a capacity crowd of 18,000 inside; “Thunder Alley” immediately outside the arena drew thousands of other rabid fans eager to watch on huge video screens as their Bolts wrapped up the best-of-seven Stanley Cup finale by eliminating the Montreal Canadiens in five games.

Their loyalty was rewarded with a 1-0 victory - the team’s third overall championship.

Throughout the recent Fourth of July holiday weekend, Stanley Cup location was a hot topic on Tampa television, radio and certainly among fans. Did the area want the Lightning – which took a 3-0 series lead - to wrap up the title in Montreal with a four-game sweep? Or would locals mind too much if the team lost Monday night opening up a chance to clinch the Cup at a home game in Tampa?

Even Tampa Mayor Jane Castor conceded she wouldn’t be too upset about a Game 5 if it meant these loyal fans could watch the team clinch the championship on home ice, joking that the Bolts “could give them just a little break” to come home and play for the title.

Although not the Lightning’s intention, that’s exactly what happened. But the team made good – securing Tampa Bay its third major sports championship in the last year.

This is the Lightning’s second straight NHL title and in February, the Tampa Bay Buccaneers earned a Super Bowl trophy – famously tossed boat-to-boat by Buccaneers quarterback Tom Brady during the team’s celebratory boat parade in February.

Another of the area’s teams, Major League Baseball’s Tampa Bay Rays also contributed to the year of sports excellence – advancing to the 2020 World Series only to lose to the Los Angeles Dodgers in six games.

Setting the winning tone Wednesday, five Rays pitchers combined for a seven-inning no-hitter against the Cleveland Indians in the opening game of a double-header a half-hour’s drive away from Amalie Arena at their home ballpark in St. Petersburg.

The Lightning’s efficient championship work in the last week was the first time this community could be a full-on part of such an effort.  Because of COVID-19 safety protocols during the past year – attendance during the Lightning, Bucs’, and Rays’ most recent title runs was limited or essentially non-existent.

For the first time since 1944, the 2020 World Series was played at a neutral, COVID-controlled site in Arlington, Texas. The Texas Rangers’ Stadium was essentially halfway between the team’s home venues in St. Petersburg and Los Angeles eliminating any true “hometown” feel.

In a twist of irony, the Tampa Bay Buccaneers became the first franchise to play in the Super Bowl in their home stadium. Yet the Bucs’ Feb. 2 victory over the Kansas City Chiefs was in front of a vastly limited audience – 25,000 people were allowed at Tampa’s Raymond James Stadium, which holds 65,000.

So this week’s Stanley Cup Finals was a hugely popular event – fans and Tampa sports royalty didn’t miss a chance to offer their support and relish the pride.

Buccaneers quarterback Brady, who teamed with golf legend Phil Mickelson to play fellow NFL great Aaron Rodgers and Bryson DeChambeau in The Match this week is a huge Lightning fan.

“Let’s do this again, Lightning let’s go. Let’s go for two,’’ Brady said in a video message played for fans before Monday’s Game 4 in Montreal. “Let’s keep Lord Stanley in the Bay area right where he belongs.”

And sure enough, Champa Bay lived up to its name. Again.