By Holly Cain | Posted 18 days ago 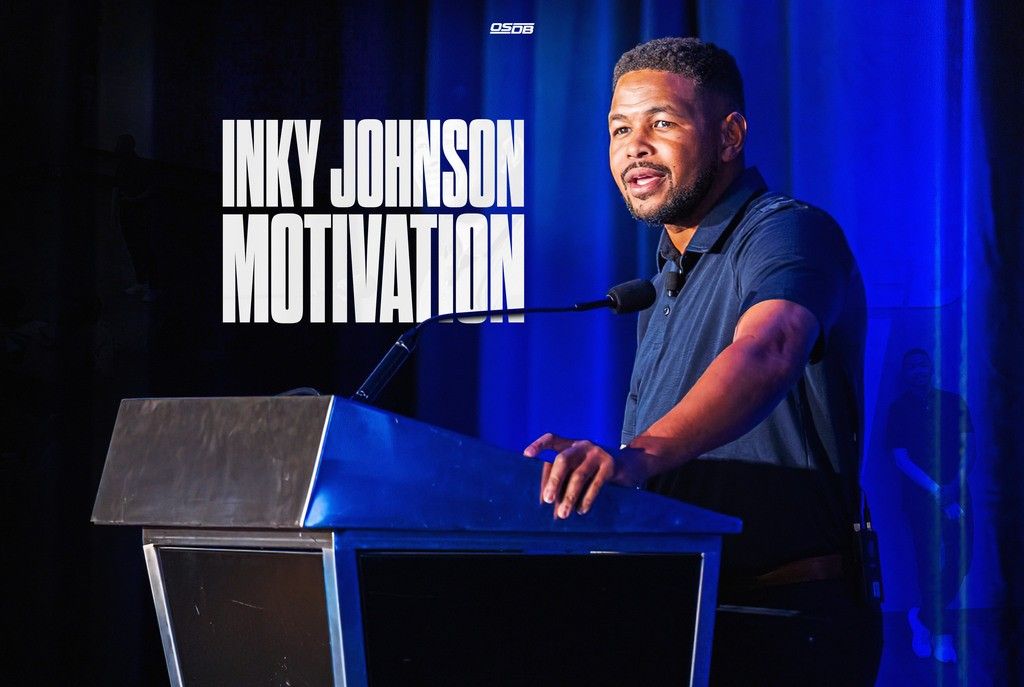 For much of his childhood, Inky Johnson’s weeks were marked according to the once every six days he got to sleep in a bed, not on top of mattresses scattered on the floor. One of 16 people living in a tiny, two-bedroom home in one of Atlanta’s tougher neighborhoods, Johnson spent his early days adapting to the rough living situation at hand -- somehow staying positive, always picturing better days ahead.

His mother, who had Johnson at 16 years old, worked multiple jobs spanning day and night shifts and Johnson figured out that his way to change the family’s tough existence was to turn his vast natural talents into a well-paid career.

Johnson was sure that his impressive full scholarship football opportunity playing defensive back at the mighty University of Tennessee would set him -- and his family -- up for a better life, a deep breath.

He was outstanding and became a projected National Football League draft pick. His time playing football and excelling academically at Tennessee certainly paved a promising way for Johnson.

Just not the way he imagined.

On Sept. 9, 2006 Johnson – who went into the season envisioning a 10-game countdown to the 2007 NFL draft - made an amazing fourth-quarter tackle as his Volunteers played host to Air Force at Knoxville’s Neyland Stadium.

Johnson knocked the runner out of bounds, but it was Johnson who did not get up. Television footage from the game shows a silent 105,000 fans as Johnson is taken off the field on a stretcher. Ultimately, he suffered a massive injury to his right shoulder (brachial plexus). The trauma paralyzed his right arm and surgeries and treatment followed for months.

The devastating injury ended his football career, but simultaneously created a life’s work, a passion that has impacted thousands in ways that Johnson could never have foreseen.

“I was so consumed with myself, in rehab, my arm and my hand, trying to figure out what had transpired,’’ said Johnson who was right-handed and had to re-learn the basics of eating and writing with his left-hand.

“Then a little over a year mark, I started to pick my head up and pay attention to how people are being impacted and affected by what I had been through and how I responded to it. And that’s when I really made the decision that I had something I could use to add value to the world.

“I think from my mindset, my attitude, from just a spirit and disposition standpoint, having encountered so much adversity and opposition along my journey prior to my injury happening, of course the shock of it was tough, it was disappointing,’’ Johnson continued. “It took some time to get used to.

“But I feel like the attitude was already in place, the mindset was in place and provided the perspective I needed to get through it.’’

For more than a decade, Johnson has been sharing his story of promise, heartbreak and reclaimed triumph -- a mega-talented football star from the humblest of upbringings suffering a horrible injury then recovering, recharging and readjusting his life goals to benefit everyone around him.

It may not have seemed like “the plan,” but judging by Johnson’s new-found acclaim and impact, it has certainly been a lesson in perseverance and life-shift.

Johnson has always been so good at football, but perhaps the real talent is in his ultimate ability to triumph over tough circumstances – something he has actually been doing his whole life.

“I was the first one in my family to go to college which was something that was extremely important to me.,’’ Johnson told OSDB recently. “I felt at that time in my life, sports was the vehicle and the platform that would allow me to do certain things for my family, like help my mother who was working a double-shift at Wendy’s.  Help me and my cousins, help my grandma have a better life. So when that dream got deferred and my career ended, it was very hurtful and something I felt, ‘man, I can’t take care of my family now.’

“And the thing that really freed me up, even though they were in a space and place they were rooting for me to make it and wanted it to happen. But when it (NFL career) didn’t happen, it wasn’t like their attitude was, ‘man, he didn’t make it.’ And it helped my recovery process as well that I didn’t have that level of pressure on me.”

He always had the self-motivation. And in the past decade and a half, Johnson has added a Master’s Degree from the University of Tennessee, become a husband and father, and changed lives and philosophies all around the country as a sought-after motivational speaker.

Major corporations from Chick Fil-A to Bank of America, to professional sports leagues from the National Basketball Association (NBA) to the NFL and Major League Baseball (MLB) have hired Johnson to share his inspiring story of prevailing in the harshest of circumstances.

“I speak to every dynamic and it’s great because I feel like my story and my message resonates with every group,” he said.

That has certainly been the case.

“I feel like this is new life for me, new purpose for me,’’ Johnson said. “So just the fact I felt like there was new purpose for me, and the fact I was willing to do it, I think it intrigued a lot of people. And when they saw me speak and came to events, it really impacted them on a spiritual level because they knew my personality.

“They knew how I lived my life and when they saw me speak, it was different. Even for me, it was a totally different experience. It was confirmation for them and for me that this is what I was supposed to be doing with my life. And they love it. I think today, they are even more proud of me than they ever were when I played football. So, it’s awesome to see.

“It sounds simple. But at the time [of my injury recovery], I wasn’t thinking about it that way because I was just trying to figure out life and what happened to me. And when I shifted my perspective and my focus, it made me look at the bigger picture and how it could serve as a blessing and source of encouragement and empowerment to other people.

“That’s the most rewarding and fulfilling part.’’