Page: The future is now for Justin Fields and Trey Lance

The future is now for Justin Fields and Trey Lance

By Cameron Dasilva | Posted 1 year ago 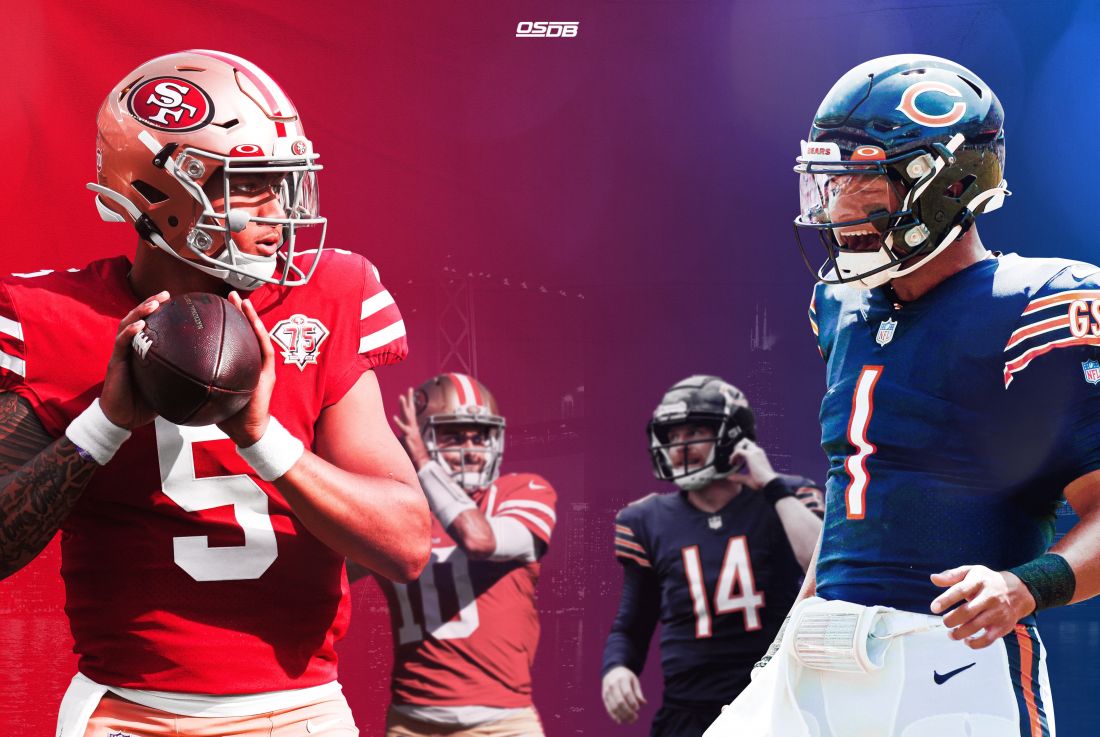 There are a lot of difficult decisions NFL head coaches have to make, but perhaps one of the most difficult is when to play a rookie quarterback -- one who was selected in the top half of the first round, that is.

No player is more popular within a fanbase than a first-round rookie quarterback with the potential to save a franchise. You’ve heard it before, haven’t you?

“Give him two years and he’ll be a Pro Bowler!’

It’s all about hope. Fans hope a young, exciting quarterback can take a middling franchise to the Super Bowl and do what Patrick Mahomes has done for the Chiefs, what Josh Allen has done for the Bills and what Kyler Murray has the potential to do in Arizona.

For the Bears and 49ers, hope is running rampant thanks to the arrivals of Justin Fields and Trey Lance, respectively. Fields, who the Bears traded up to No. 11 overall for in this year’s draft, is poised and collected in the pocket, and possesses the mobility and athleticism of a Dak Prescott.

Lance has elements of Mahomes and Allen in his game, so when the 49ers made a massive trade up to No. 3 overall to select him out of North Dakota State, fans were elated. With his size, arm talent and playmaking ability, it’s hard not to get excited about his future in the NFL.

But for both teams, a tough call has to be made -- and soon. Do the Bears and 49ers start their rookie quarterbacks in Week 1? Or should they let their veterans man the offense until the rookies are ready to take over?

There’s no right answer, to be honest. And anyone saying it’s an easy call is either a) lying or b) doesn’t realize how difficult playing quarterback is in the NFL.

Bears coach Matt Nagy is taking a more definitive approach than Kyle Shanahan is with the 49ers. Nagy has said all along that Andy Dalton will be the Bears’ starting quarterback. He said it when Dalton was signed, he said it after Fields was drafted, and he said it again after Chicago’s second preseason game.

"We need to see him in the regular season," Nagy said of Dalton after reiterating that the veteran will be the Bears’ Week 1 starter against the Rams.

Shanahan is less certain of who will be under center when the 49ers open the season against the Lions on Sept. 12. Despite Lance throwing two touchdown passes in the team’s second preseason game against the Chargers -- and Garoppolo throwing a pick -- Shanahan hasn’t seen enough yet to name a starting quarterback.

“No, I haven’t seen that,” Shanahan said. “I would love for it to be more and more each week, but I think the situation’s pretty similar right now.”

Fields has a far worse chance to be the starter than Lance does, but he’s been fairly impressive in the preseason.

In the Bears’ 20-13 win over the Dolphins in the opener, Fields completed 14-of-20 passes for 142 yards with one touchdown. He also rushed five times for 33 yards and another score, providing a spark on offense. He looks the part of a starting quarterback, showing excellent composure, good accuracy and making smart decisions with the ball.

Dalton is a decent backup, but the Bears aren’t going to win a Super Bowl with him. Heck, they might not make the playoffs with the former Bengals and Cowboys quarterback.

Fields may have a lower floor because he lacks the experience that Dalton has, but the rookie has significantly more upside and at least makes the Bears a threat in the NFC North if he takes care of the football and adds an element of unpredictability as a runner.

For that reason, the Bears should start Fields over Dalton. Fields is more mobile and excels off-schedule, which will happen often due to the Bears’ shaky offensive line. No one should expect Dalton to succeed with defenders bearing down on him and flushing him from the pocket on a consistent basis.

This one play shows what Fields can do that Dalton simply cannot.

Fields is already seeing the game slow for him, which is rare for a rookie quarterback. He told reporters after his preseason debut that “it was actually kind of slow to me, to be honest” when asked about the speed of the game.

He clarified later that he doesn’t want to “come off cocky or like I already made it,” acknowledging that he still has “a lot of work to do.”

Clearly. he isn’t overwhelmed by the jump from college to the pros, but he’s also aware enough to backtrack on a comment that could be taken as bulletin board material.

The Bears obviously like Dalton but the way they’ve handled Fields is doing the rookie no favors. He doesn’t take first-team reps on offense, which is nothing like the situations that Lance, Trevor Lawrence, Mac Jones and Zach Wilson are handling with their teams. All of those other four rookies are working with the starting offense, both in the preseason and practice.

Fields has yet to get first-team reps in the preseason, with those opportunities being reserved for Dalton. In Week 2 of the preseason, Dalton threw for 146 yards with a touchdown and interception, completing 11-of-17 passes. But of the seven drives he led, the Bears ran more than four plays only once.

Fields handled the other six drives, with the Bears putting up points on two of them. That didn’t include an 11-play drive that ended on a failed fourth-down conversion. Once again, he looked comfortable and capable, further proving he should at least get a crack at the starting job.

With Lance, the competition is much more fluid. He’s battling Jimmy Garoppolo in what’s a legitimately open competition. Shanahan hasn’t declared a starter and may not before Week 1, weighing his options with Garoppolo and Lance.

On one hand, Garoppolo has led the 49ers to the Super Bowl and when healthy, he’s played relatively well (51 TD passes, 26 interceptions in his career). The 49ers know what they’re getting with Jimmy G: a mid-level starter who knows the offense and can get the ball to his playmakers. But at the same time, he’s thrown 26 interceptions in 30 starts with the 49ers and fumbled it 17 times in that same span.

Lance, on the other hand, has a wider gap between his floor and ceiling. As a rookie, his floor is naturally low because he played one game in 2020 at North Dakota State, so it’s been a while since he was truly a multi-week starter. There might be some rust to knock off, as a result. But he has the potential to be just like Justin Herbert of the Chargers in his rookie season.

Lance has a big arm, is willing to take shots deep and can keep plays alive with his legs, which he did plenty of at North Dakota State. If Garoppolo is a game manager the way Alex Smith was in Kansas City, Lance is Mahomes in that scenario.

Just look at this play from the rookie in his preseason debut.

.@justnfields uses his legs to score his first #NFLPreseason touchdown! 🙌

This was against backups during a meaningless preseason game, but the talent is undeniable with Lance. He’s just somewhat raw and needs a little bit of time to develop. Should that be enough to keep him on the bench, though?

The Chargers started Tyrod Taylor last year and if not for a freak accident that resulted in a punctured lung, who knows when Justin Herbert would’ve played. He showed that not all rookies need to sit before starting and had Taylor not gotten hurt, Herbert likely wouldn’t have won Rookie of the Year.

Lance and Garoppolo are neck and neck in this race for the starting job, but just as the tie goes to the runner in baseball, it should go to the rookie if the battle is this close. Let him get his feet wet and see what he can do. Sitting him down after four shaky performances isn’t going to break him, just like making him wait eight weeks to start won’t turn him into a future Hall of Famer.

Either he has what it takes to be a starting quarterback or he doesn’t. And the 49ers shouldn’t waste time seeing what Lance can do in a regular-season game by starting Garoppolo over him.

It’s not an easy decision for the Bears or 49ers to make. But with what each rookie has shown in the preseason thus far, there’s no reason to believe Fields and Lance can’t handle the rigors of being a starter in the NFL. Give them a shot early and let them fire away like Herbert did a season ago.