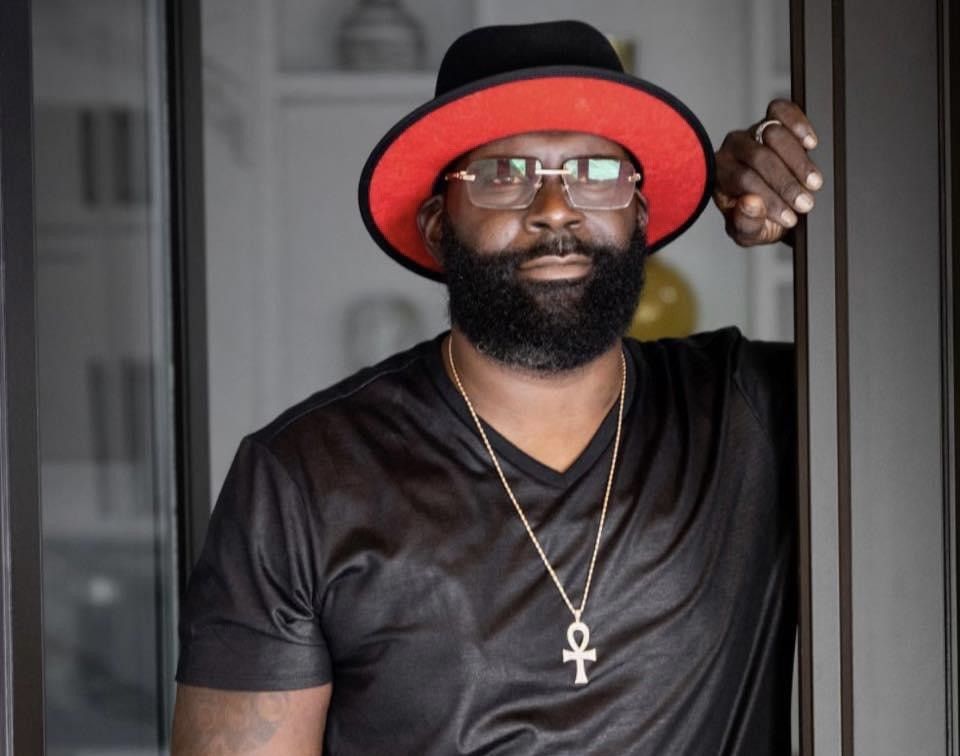 Lional Dalton battled on the field every Sunday for nine seasons, suiting up for five different NFL teams, including the Baltimore Ravens. As a stud defensive tackle with one Super Bowl ring, he was tasked with beating the top offensive linemen in football week in and week out.

In the last 18 months, he has been in the fight of his life.

Dalton, whose nickname is “Jelly Roll,” was diagnosed with end-stage kidney failure in January 2020 and has been searching for a new kidney since.

“January 2020, we had just moved into our new home about 5-6 months. We moved from Florida to Atlanta. We have family here, so we had a New Year’s Eve party. About 3 or 4 o’clock in the morning, I woke up short of breath. I took my allergy medicine,” he told OSDB Sports recently. “I thought maybe I was congested. I have a post-nasal drip that sometimes causes shortness of breath. None of that helped.

“Went to CVS, bought a few things, nothing helped. My intuition told me to go to the fire station because something was not right. My blood pressure was extremely high – like stroke high. And my oxygen level was extremely low. They rushed me to the hospital, put me on an oxygen machine. After being there for about two or three days, the doctor came in and told me that my kidneys are functioning at 17-20% and I need to get on dialysis as soon as possible and I’ve been on dialysis ever since.”

Dalton has lost more than 120 pounds and is in desperate need of a new kidney. He’s taken up a healthier lifestyle, giving up alcohol completely and changing his diet entirely. He’s currently working on eliminating his sugar intake and has eaten more plant-based foods to help stay on the right track.

He says those changes have helped with the side effects that come with dialysis, and if he does get a new kidney, eating healthier can prolong the lifespan of the organ in his body.

“That’s definitely helped me and I have research from different Facebook groups about being plant-based and how that helps with the dehydration and the side effects of dialysis,” he said.

Dalton has two paths to a new kidney. He can get one from a living donor, which is ideal. But in order for someone to donate a kidney, he or she has to be in good health.

For Dalton, his wife wasn’t a match. His mom has diabetes so she can't donate. Most of his family members were eliminated from the process for one reason or another related to their health or blood type.

His wife and a family friend started the website “New Kidney for Jelly Roll” to spread awareness about his story in hopes of finding a living donor who’s a match for Dalton, expediting the process.

There is some hope on the horizon, as two Ravens fans have stepped up as possible donors. It stemmed from Dalton’s time working with the Living Legacy Foundation.

He received a plaque for raising awareness for the foundation, which had a business card on the back of it. He called the number, and the Living Legacy Foundation helped get him on “Good Morning America,” which got his story in front of a lot of eyeballs.

A bunch of Ravens fans reached out after learning of his situation, with two in particular hoping to be matches: one from New York and one from Baltimore. Both are going through the process of determining whether they are a match.

“A lot more people have been reaching out and saying how they appreciate me being open about it,” Dalton said. “I’ve noticed I’ve gotten a lot of love from old fans in Baltimore and Kansas City sending me prayers and support and that has really helped me throughout this process.”

The other option is a deceased donor, which takes much longer. In that case, because of Dalton’s rare blood type, it could take 8-10 years to find a kidney.

“For a deceased donor, because I'm a Type O blood type, that’s the rare type, I can donate to anyone but only O can donate to me,” he said. “My wait time is 8-10 years. People with other blood types, their wait is like 3-5 years. So, it’s best for my blood type if I can find a living donor because that’s only a 3-6-month process.”

If Dalton finds a living donor, that kidney could last 25-30 years, depending on how healthy the person who receives the donor is after the transplant. A kidney from a deceased donor only lasts about 10-15 years, also dependent on the person’s lifestyle.

The other hurdle is the fear in the general public about donating organs. That’s something Dalton would like to spread awareness about, clarifying that it’s not as risky a process as many feel it is.

That’s the case within his own family, because many of his cousins are worried about the long-term effects of donating a kidney.

“A lot of my cousins and family members are afraid of what’s going to happen to them,” Dalton said. “They don’t like to be put to sleep, and the process of losing a vital organ scares people. So, I’m trying to remove the stigma of donating kidneys. I’ve met people who have donated and are doing great and living healthy now.

“The great thing about it is any issues you have with the kidney, the insurance of the person you’re donating to covers you for the rest of your life. I'm just trying to get the word out and help people remove those fears.”

Dalton has good days and bad, which come with fighting this terrible disease. Living in Atlanta, the summers are obviously hot, and that makes Dalton’s situation more difficult.

“It’s hot right now, so with kidney disease, you can't drink a lot of water because you retain water, because you don’t urinate as much or at all,” Dalton said. “So. it’s been really tough in the summer because I’ve been having the symptoms of dehydration, headaches, fatigue. But I can only drink a liter of water a day. For someone like me, I was drinking like half a gallon a day before this all happened. So, the summer’s been rough.”

Although the symptoms only started about a year and a half ago, Dalton can't help but think back to 2005 when there was somewhat of a red flag raised during a physical – something that didn’t spark his attention then but in hindsight now could’ve been an early sign of kidney failure.

A Kansas City Chiefs doctor told him he had protein in his urine, which he initially brushed off as not being a concern. He wishes he would’ve paid closer attention, potentially sparing himself from the situation he’s in now.

“To my ignorance, I had no idea what that meant. He didn’t explain it to me. He just told me I had protein in my urine,” Dalton said. “Finding out now, while I'm dealing with this disease, protein in urine is a sign of kidney failure.

“And this is 2005, so I wish he did a better job of explaining it to me because a lot of the medications I was taking were really tough on kidneys. And I ended up playing three more years after that. Motrin and anti-inflammatories, all that stuff wreaks havoc on the kidneys. I took a lot of that stuff, especially my last years. You get older and you try more things to get out there on the field. So, I wish I would’ve known then how serious it was because if I would’ve gotten on it, I probably wouldn’t even be in this situation right now.”

In the beginning stages of kidney failure, Dalton felt fine. He didn’t have symptoms and was living his life normally.

“When I went to the hospital, I knew something was wrong. Something told me to go to the fire station around the corner from my house because I knew they had an ambulance there,” he recalled.

“In the beginning stages of kidney failure, I felt great. I didn’t feel any symptoms. I thought if I could eat something or take a pill, it could make it go away. But that’s not the case when you’re dealing with renal issues. So for the first five months, I was stubborn. Checked myself out of the hospital when I shouldn’t have. I did a few things because of my ego, being a football player, you think you can just work through it and figure it out yourself. But this last year and a half, I’ve been following the doctor and doing a lot more research and talking to people who are dealing with these issues. I’ve had a lot of people give me advice that have helped me through the process.”

Aside from a spinal injury suffered in 2006, which ultimately led to his retirement in 2008, Dalton says he “had a pretty lucky career” injury-wise. “I never got hurt until my last year in the NFL,” he said. That year, he suffered a high ankle sprain, and in his first game back from that injury, he suffered a herniated disc in his neck, which is when he realized it was time to hang up his cleats.

That’s not to say he didn’t have minor injuries that he took medication for, which he believes worsened the condition of his kidneys over time.

“I think my wanting to stay on the field, be accountable during practice and fear of missing practice in my early years contributed to the medication I used,” he said. “A lot of those medications they give you for pain in the NFL. I'm surprised a lot more players don’t have kidney issues.”

Former NFL defensive lineman Albert Haynesworth recently underwent a kidney transplant, which helped save his life. Dalton played during the same era as Haynesworth and has kept in touch with him since, even living in the same neighborhood in Florida.

“My friend Cindy, who’s helping me get my story out, she brought it to my attention. And I was actually with Albert Haynesworth – he has a place in Florida as well. We were hanging out right before I moved here, me and him had a barbecue at his house. So, he lived right around the corner from me in South Florida and my neighbor was his best friend. So, we used to hang out every once in a while. I had no idea until I saw he just got a kidney.”

Dalton hasn’t talked to Haynesworth since he received his kidney, saying, “I didn’t want to bother him during the healing process.” But he plans to reach out to him once Haynesworth is in the clear and recovered fully from the surgery.

Dalton will continue to wait for his time to come to receive a kidney, but he’s not going to sit idly by until that day. He remains hopeful and will keep spreading awareness for not only the severity of the disease, but also the importance of donating organs if possible.

And for his fellow players who may not want to talk about health issues of their own, he hopes his story will help give them the courage to open up and get the necessary help – because it could save their life.