Colts’ Al-Quadin Muhammad Aims to Get People Treatment They Need

By Cameron DaSilva | Posted 6 months ago 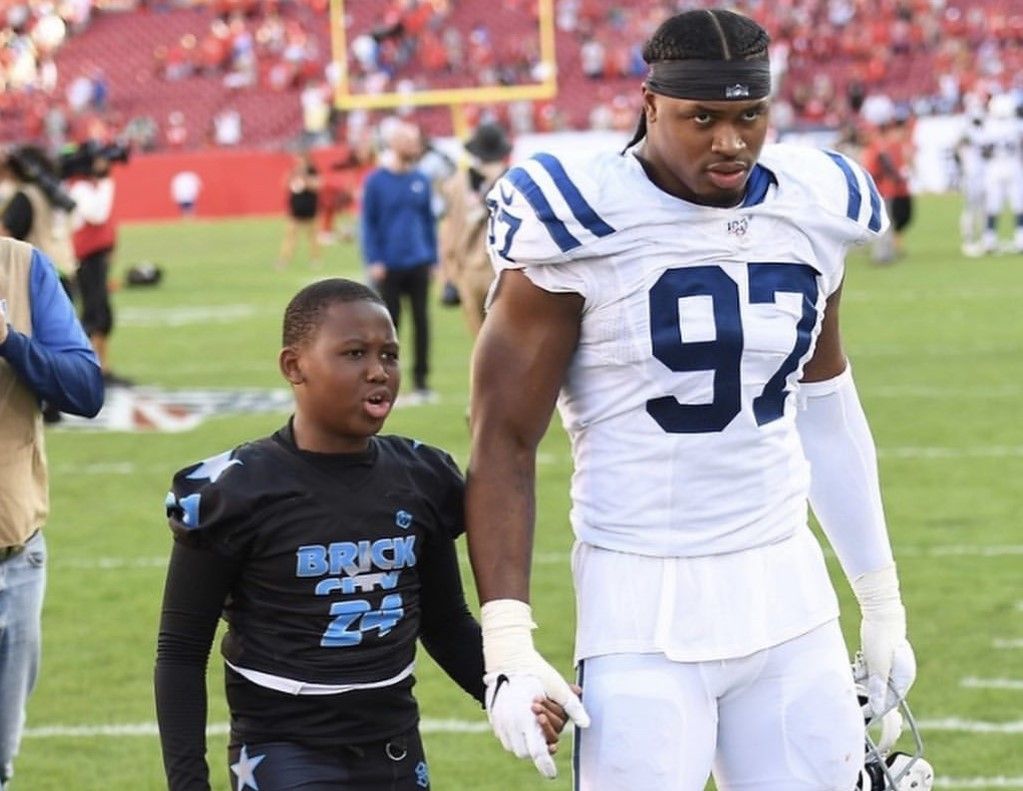 Al-Quadin Muhammad makes a living in the NFL sacking quarterbacks and stopping running backs in the hole for the Indianapolis Colts. He doesn’t play football just to provide for himself and his family. He uses his platform and success to help others – specifically those who battle substance abuse and drug addiction.

Muhammad had a difficult upbringing in Newark New Jersey. His dad currently owns a construction business and his mom is a school teacher, but his family wasn’t financially stable during his childhood. His mom raised him and his three brothers as a single mother, doing whatever she had to in order to make ends meet and provide for her family.

“They changed their life around and they’re doing great. But it was rough,” Muhammad told OSDB Sports via phone. “My mom has four boys, so you can just imagine what that’s like, and I'm next to the baby. It was tough, but I actually appreciate my upbringing and the different walks of life that I was going through because it made me stronger, it made me tough. It made me the person I am today.”

Muhammad saw the impact that drugs can have on a person first-hand during his upbringing, being around people who struggled with addiction. Now 26 years old, he wants to help those people land on their feet by opening a treatment facility in Kokomo, In.

He expects it to be one of the biggest in the world and hopes it can save the lives of people who are dealing with substance abuse. They don’t always get the help or attention that they need in order to get their lives back on track, so Muhammad wants to give them a facility that can assist in that.

“The area I'm from, there’s a lot of people that are on drugs, that have drug addictions,” the sixth-round pick of the New Orleans Saints out of Miami (Fl) in 2017 said. “Those people sometimes have serious issues and sometimes they don’t seek attention and help. I felt like, you know what, I grew up around that and saw people doing drugs, strung out on drugs, addicted to drugs. I always wanted to help people and spread some light on that and get some guys in the NFL and I could use my platform. People could see what I'm doing and they want to be a part of it and they can do it in their cities. When it came across my table and I heard it, I was like, ‘Alright cool. I could take advantage of this and this is something I want to get involved with.’”

He and his business partner are still in the process of getting the facility up and running, but Muhammad said it’ll be open soon.

Muhammad wants to keep kids on the right path. Each year, he hosts a free football camp for inner-city youth in New Jersey. It’s about more than just teaching them the fundamentals of football or helping develop their skill sets, though.

Muhammad uses it as an opportunity to give them life advice and show them that they can make it out of whatever situation they might find themselves in – be it poverty or any other challenges in life. He’s living proof of that and wants kids in similar situations to see that.

“Me being a professional athlete, kids feel like it’s almost impossible or that it’s one in a million,” the defensive end said. “I also try to get to them and let them know that it’s possible for them to make it out and it doesn’t have to just be football or basketball. They can go to school, get good grades, they got scholarships, grants, different stuff like that so they can be successful. I do a camp to try to give back to them because I was once one of those kids from North New Jersey.”

Muhammad’s grandmother helped inspire him to always find ways to give back to the community. She was all about helping others, whether it was through charity or the local area. As part of his efforts, Muhammad started a non-profit called the Liz Foundation that he named after his grandmother.

“It’s called the Liz Foundation and it’s after my grandmother. She had diabetes and stuff like that,” he said. “Me and my mom have been talking about it and it’s something new that I just did. My grandmother was an officer and she was into giving back to people. That’s what she was all about. I started that and put it in her name because I wanted to give back to kids in the inner-city that aren’t as fortunate because my grandmother was a giving person.

“I meet a lot of different people that I come across being out and talking and telling them what I’m about. I'm more than an athlete and that’s all people see sometimes. They don’t really know the story behind them or what they’re about. So every time I meet people, I always get into that and they realize, ‘wow, this dude is cool.’ And they want to be a part of the things that I have going on and get on board with it and help me achieve some of the things I want to achieve. My main focus is not only growing as a human being, a dad and stuff like that, but it’s also to give back to kids that have a dream that I’m actually living.”

Muhammad has already taken steps financially to set himself up for success after his playing days in the NFL are over. He’s big into real estate, using it as a form of passive investing, especially during the offseason when he’s not busy practicing and taking the field on Sundays.

He buys properties in the North New Jersey area and rents them out, which he sees as a safe form of investing – and also something he’s passionate about in addition to playing football. He plans to expand his properties into the Virginia and D.C. area, and when the time is right, he wants to begin flipping houses.

That venture will have to wait until after he’s done playing, though.

“It’s something I always wanted to do and I understood that when you make a lot of money and you make it fast as a young athlete, sometimes you think it’s always going to be there,” he said. “I always think of life after ball but not only that, in real estate, you can see your money, the money is right there. Don’t get me wrong, the market goes up and down, but (real estate) is safer than other investments people try to get you involved in.

“It helps you form some type of residual income, so I think it’s a good thing and I think if I just build my portfolio as a young athlete, no matter if I play 10 years, eight years – no matter what it might look like, it’s something I can get into immediately after football and really take advantage of and do it more. I'm doing it now while I'm playing and it’s wild and awesome – it’s just as good as playing ball if you’re doing it right, but it’s a good gig.

“I didn’t really get completely into flipping houses because it takes time and I'm busy with ball and training, but that’s also something I'm going to get involved in and take advantage of when the time is right.”

Fashion is a current passion of Muhammad’s, and he wants to turn that into a business venture, as well. He loves getting dressed up and wearing designer clothes and shoes but he wants to get into it more, taking it from passion to possible business opportunity, either as an ambassador or a designer of his own clothing line.

“I actually thought about creating a line. It’s something that I want to do. I’ve talked about it a billion times,” he said. “I’d like to get into maybe being a big brand ambassador for a specific brand and wear their clothes and open up a store. A lot of athletes like fashion so who knows where I'm going to go with it but it’s something I’ve been thinking about doing a lot. I’m going to take advantage of it. I like unique pieces and different stuff and sometimes were stuff that the average person might not wear. I feel like it’s a part of, when you look good you feel good and it’s a spirit thing, keeping you in the right mindset. I’m an energy person so I like good energy. So it’s a part of who I am.”

Some of his favorite brands at the moment include Versace, Dolce & Gabbana, Yeezy, Nike, Jordan, Dior and Virgil Abloh’s Off-White. He enjoys dressing up for his arrival to the stadium before a game because as the saying goes, “look good, feel good, play good.”

“I try to make sure everything is going perfect. Sometimes, when things are off, your mind can be elsewhere.”

Muhammad has plenty on his plate both during the season and in the offseason, never letting opportunities pass him by. And while he should be a key player for the Colts this season after signing a one-year deal, he’s always setting himself up for success whenever his NFL career does end.