Page: Ahman Green has transitioned from running the football to running an esports team at Lakeland University 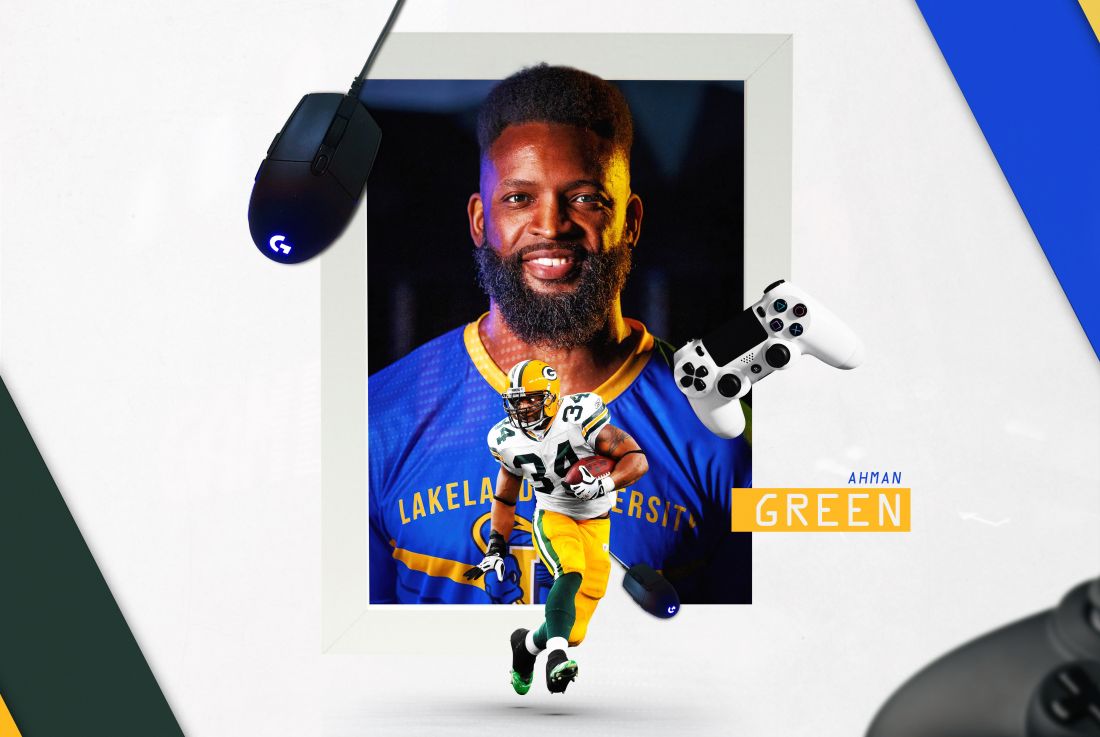 Ahman Green started his gaming journey on ColecoVision, the superior, but less popular alternative to the Atari 2600 or Atari 5200 in the early ‘80s, when home consoles first started to take off in North America.

Games like Zaxxon and Donkey Kong got him hooked, and over the next 30 years, he leveled up as technological advances and improvements delivered improved consoles and gaming experiences, transitioning like many others to the Super Mario Brothers on the Nintendo Entertainment System and rocking the Sega Genesis before continuing forward with each successive generation of PlayStation and Xbox.

“Now I’m sitting here looking at two Xboxes and four PlayStations that I still actively play on,” the former University of Nebraska and Green Bay Packers standout said with a laugh, noting that the original Xbox remains his favorite console of all time, largely because of Halo.

“That game is the game I could play all day, every day if I had no other options but to play one game on, on one system,” he said of the military science fiction franchise that has spawned numerous sequels and variations. The sixth main installment and 17th game in the overall franchise, Halo Infinite, is due to drop on Dec. 8, 2021.

These days, gaming isn’t just a hobby or diversion for Green the way it was in his youth; it’s now his passion and his profession.

FROM THE GRIDIRON TO GAMING

As a diehard gamer and fan of all things “nerd culture” — video games, comic books, anime, etc. — Green, 44, was intrigued by the prospects of Twitch when the streaming platform first started gaining traction and buzz. He talked to people he knew within the industry, trying to figure out of there was a way to parlay his enjoyment of gaming into something more, liked the feedback and information he received, and purchased his first gaming laptop.

“It was an Origin PC,” recalled the former Pro Bowl running back, who has been streaming since 2016.

He then started making connections within the industry and attending all the major events he could — E3, ComicCon, DreamHack, PAX — eager to show people how serious he was about the gaming community and the culture surrounding video games, seeking out ways to develop his channel and grow his brand within the booming space.

“Things fell into place to where now I have a podcast on there, Ahman Green’s Gamers Lounge,” said Green, who spoke with Clint Oldenburg of the EA Sports Madden team on the most recent episode of his show earlier this week. “I talk about the industry, game releases, and the culture surrounding video games, plus give recommendations and reviews.”

After building his stream and establishing himself as a knowledgeable, passionate voice within the game space over the last several years, an opportunity to explore another avenue with the gaming world was presented to Green during a monthly get together with a friend at the local burger joint not too far from his house.

As they sat catching up, chatting about games and comic books as they normally did, Larry Marcus mentioned that his alma mater, Lakeland University, was looking for both a football coach and an esports coach, and he believed Green was the ideal candidate to fill both roles.

“I knew right away that I would have to choose one,” the Packers’ Hall of Famer began to OSDB Sports recently “I know what it takes to be a football coach, and I had an idea of what it would take to be an esports coach, which is the same commitment as being a traditional sports coach, so I knew I couldn’t do both, and the one I was leaning to right away was esports because it was something that was new, and for me, it was something I hadn’t done before.

“I’ve coached football, I know the routine there, and it’s not that I was bored of it, but I always want to try something new. If I like it, I like it, and if I don’t, at least I know and I gave it a shot.”

He interviewed, was hired, and was introduced as the coach of the Lakeland University Muskies esports team on Feb. 17, 2020.

“The day after my birthday,” he noted. “It was fantastic how it all worked out.”

The idea of someone being a student-athlete or potentially pursuing a professional career playing video games seems like a completely foreign, maybe even unbelievable concept to many people who grew up prior to the rise of esports and gaming.

“For our generation of people, video games were a hobby; they were like dessert,” said ESPN host and personality Arda Ocal, who was deeply involved in the network’s initial forays into esports, covering both the League of Legends World Championship and BlizzCon in 2016. “It was ‘Go play for a little while, but remember, it’s just fun.’

“This generation sees video games as a lifestyle now,” continued Ocal, who also served as the play-by-play voice of the NHL Gaming World Championships and hosted “Ninja New Years,” a 12-hour stream from Times Square by Fortnite streamer Ninja in 2018. “I’m a Nintendo kid and growing up, I never had local tournaments to go to. My ‘local tournament’ was going to the arcade down the street and putting my quarter down on the Mortal Kombat machine waiting my turn; that was my tournament or my competition.

“Now you’ll see signs for tournaments coming up and there is a competitive infrastructure that exists and is flourishing.”

That flourishing in what has prompted numerous schools, including Lakeland, to create their own esports programs and teams, and provided Green with the opportunity to bring some of what he learned throughout his years as a student-athlete at Nebraska and an 11-year NFL career to the young men and women that make up the Muskies esports team.

“The two things I preach about the most are communication and accountability — making sure you do your job, day in and day out, even if it’s not a team thing,” continued the Lakeland esports coach, who also works with his student-athletes on establishing good routines, visualizing success, and as he puts it, “giving them the basic broad strokes of being someone that generally knows how to take care of themselves physically and emotionally, on and off the sticks.

“Being a college athlete, you want to be the best at what you do, so you have to have knowledge of certain things that are the bare necessities,” added Green, citing things like proper sleep, proper nutrition, and regular exercise as core areas of focus for the 39-person Lakeland esports team, which includes Curtiss Dokey, who claimed the team’s first-ever individual title last season, winning the 2020 New England Collegiate Conference PS4 Madden Championship.

As odd as it may sound to some, the fact remains that esports and gaming are massive industries at the moment and show no sign of slowing down, with professional esports players approaching their craft more and more like traditional athletes than outsiders know or may care to acknowledge.

There are opportunities to “go pro” in various games, and exploring those possibilities is becoming an increasingly common ambition with younger generations, the same way many of their parents harbored dreams of playing right field for the Dodgers or sinking the game-winning jumper for the Celtics.

Some of the top esports athletes are venturing down that path prior to college — a journey Ocal likened to those with NHL ambitions playing in the Canadian Hockey League in their teens and returning to complete their academic pursuits later if things don’t work out — while others are following a similar path to athletes from stick and ball sports, graduating from high school success to collegiate opportunities, with hopes of turning success on the collegiate level into professional opportunities in the future.

“I tell them all the time that they’re doing something that very few people have done,” Green said. “Even though there are a lot of colleges in the United States and the world that are competing in esports, they’re the first two generations that are a part of this thing before it becomes even more professionalized.

“There is going to be a day where if you excel at Overwatch on the collegiate level, you could be the next person drafted to being a professional player. That’s going to be viable and it’s not far away because there are Overwatch leagues, Call of Duty leagues, Madden leagues, Valorant has created a pro league.

“All these leagues are getting organized and they’re playing out these seasons on a professional level and an amateur level, so it’s giving these kids the opportunity to where if they say, ‘I want to go pro in this game’ and the finances are there, they could pursue it.”

THE SEASON IS UNDERWAY

With school back in session, that means the Muskies esports season is in full swing as well, with the team competing in the NACE Starleague, which operates tournaments and seasons in various games featuring teams from colleges and universities across the United States and Canada.

“We’re in Fall semester now for League of Legends, Overwatch, Call of Duty, Rocket League, and then Madden and Super Smash Bros. will just be a weekend tournament or a one-day tournament, which is more like a points race to get to the championship in December,” said Green, who said the campus was buzzing about the team’s success during last year’s Spring schedule, where the team earned multiple playoff berths.

“Right now, I would say our best game is probably Rocket League because it’s the same team from the high school level that were state champions and they know the game really well, and they know each other as teammates; the good and the bad.

“We’re getting there in Overwatch, and in League of Legends we have a JV team that is trying it out for the first time as a team,” added Green. “We have a lot of players that played League of Legends before, but never in this group, so that’s the biggest adjustment.”

Strip away the fact that these student-athletes are competing at individual game titles and it sounds pretty similar to any traditional sports team on any number of collegiate campuses, where familiarity, continuity, and experience are keys factors to success.

It sounds the same because it is, and just like in many of those traditional sports, Green’s goal for the Muskies this season is to reach the playoffs, and hopefully bring home a title or two.

“The goal is to get to the playoffs and then try to bring home a championship for the Muskies,” said the excited coach. “At the end of the first season, I was very excited and the players were very excited; the campus was buzzing about it.

“Our season started last week and we’re progressing in the right direction.”