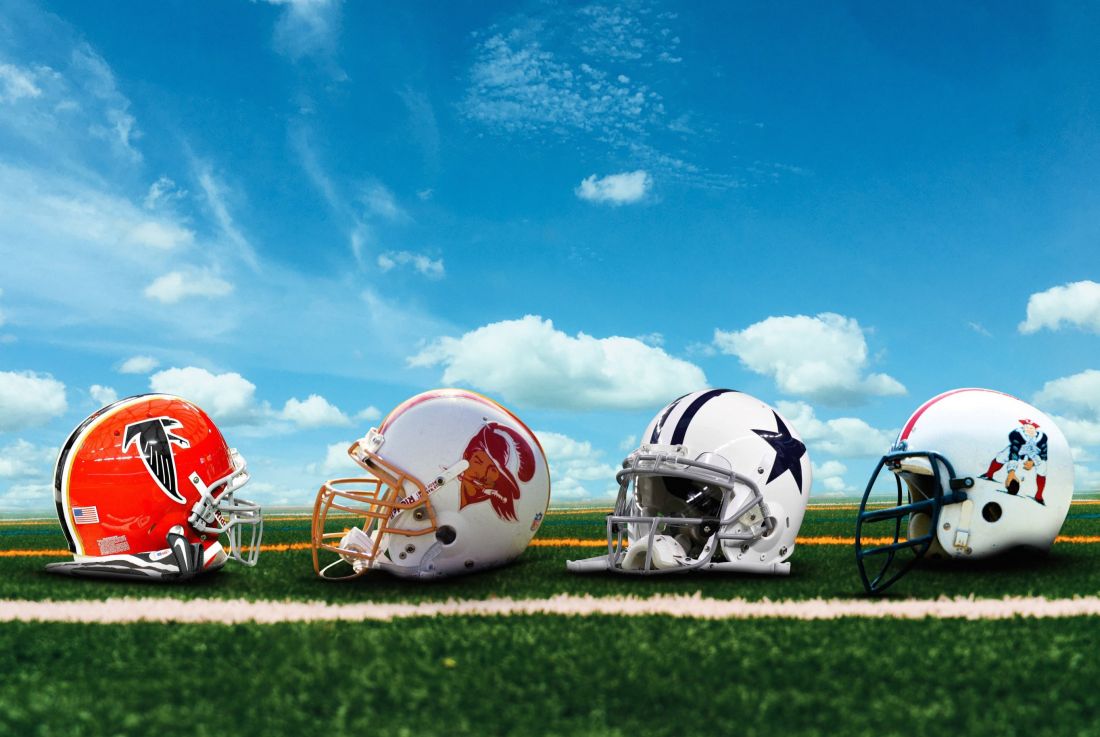 The NFL announced some big news this week, allowing teams to wear alternate helmets starting in 2022. Since 2013, teams have only been able to wear one helmet shell, though they could change the decals. Now, they can wear completely different colored helmets than their usual ones, which opens up the possibilities for classic throwback uniforms to return.

Immediately, Twitter was abuzz with ideas for what throwbacks should be worn next year. There are a lot of excellent throwback uniforms that have been kept out of teams’ rotation since 2013, but the Buccaneers, Falcons and Eagles are among the teams that shouldn’t waste any time busting out some of their best looks.

Throwbacks we want to see return

Bucs fans were hoping that when the team redesigned its uniforms last year, it would include the classic creamsicle combination. It was never likely, though, because of the one-helmet rule. Now, that changes everything.

The Buccaneers can go back to the orange jerseys with white numbers and red trim, pairing them with the white helmet that features the old logo of Bucco Bruce with the dagger between his teeth.

It’s not a uniform the Bucs should wear full-time because their current look is actually fantastic, but as an alternate throwback? Sign us up.

Oh my God the #Creamsicles are coming back baby!!!! #Buccaneers pic.twitter.com/bHXpETT5lu

It may not be for everyone, but the Falcons’ black jersey and red helmet combination is outstanding. The jerseys are a simple black base with white numbers and red trim, while the helmets are red with the classic old-school logo and a white-and-black stripe down the middle.

The Falcons still wear the black jerseys, but because of the one-helmet rule, they can't pair them with the red helmets. That’s a combination we would love to see return because the white pants with the black jerseys and red helmets is top-notch – even if it’s somewhat underrated among classic throwbacks.

All this throwback uniform talk today brought me a great deal of nostalgia. While browsing around old #Falcons uniforms and teams, I realized something.

I miss the hell out of John Abraham.

We haven’t had an edge rusher close to his level since.

The Seahawks’ current uniforms are fairly polarizing among NFL fans. Some love them, some despise them. The team’s old uniforms that featured royal blue jerseys, silver pants and silver helmets were really, really good and if modernized with tighter sleeves, it could become one of the best throwback combos in football.

It’s just not feasible for the Seahawks to wear their current helmets with royal blue jerseys because the two different shades of blue would clash terribly.

We are one step closer to this!
NFL has approved throwback helmets@Seahawks @DangeRussWilson pic.twitter.com/GS3C42mFZ3

A uniform fans have been begging to return for a long time is the Eagles’ Kelly Green look. It’s a lighter shade of green than the team currently wears, and the helmet features a simplified wing look.

The jerseys are as simple as it gets, with no stripes or piping, which is an aesthetic a lot of fans enjoy. The Eagles wore them a few times back when multiple helmets were allowed and it’s unfortunate they haven’t returned. But there’s no way the Eagles could’ve worn them with their dark green helmets. It simply wouldn’t have worked.

Alternate NFL helmets in 2022 opens the door to the Kelly Greens!!!! Which @eagles uniform do you prefer? pic.twitter.com/FEUEUWs9do

One of the more iconic uniforms in the NFL are the Cowboys’ Thanksgiving blue-and-white set. The team used to wear them for each Thanksgiving game when it was able to wear classic white helmets with the blue star, but the jerseys have gone by the wayside since the one-helmet rule was put in place.

It’s a simple combination of blue jerseys with white shoulders, each side stitched with a navy star. They’re paired with white pants, giving it a clean look. As good as the Cowboys’ white and blue “Color Rush” uniforms are, the Thanksgiving throwbacks are better. Dallas has to bring these back with the white helmets.

Only one thing left to do now, #Cowboys: https://t.co/FrzIsqt4gw pic.twitter.com/5aHSzdmZ0r

The Titans’ current uniforms are actually easy on the eyes. They’re not perfect, but they’re definitely better than what they wore previously. However, there’s just something about the classic Houston Oilers uniforms that look great. The baby blue jerseys with white helmets match perfectly, and the red striping really makes the combination pop.

At the moment, the Titans wear navy blue helmets, which wouldn’t work with the light blue Oilers throwbacks. But with a white helmet and the old Oilers logo, few fans would argue against the team wearing those old-school uniforms. Even Warren Moon wants to see them return.

The “Flying Elvis” logo has been mocked at times, with a lot of fans clamoring for the Patriots to go back to the Pat Patriot logo.

The white helmet with the old-school logo looks sharp when paired with red jerseys, a classic combination that the Patriots haven't been able to wear during the one-helmet era.

The white helmet is infinitely better than their current silver helmets, and pairs so nicely with either red or white jerseys. There are few uniforms in the NFL better than the team’s Pat Patriot look with red jerseys and white pants.

The Rams don’t currently have a white uniform in the rotation. It sounds strange, but their light-colored uniforms are called “Bone,” which is a weird off-white that almost looks like dirty laundry. It certainly doesn’t come close to touching the greatness of their old-school look from the 1980s and ‘90s. The dark blue helmets with the curled horns, paired with white jerseys that feature blue and yellow sleeves are one of the best uniforms in sports.

Of course, they should be worn with yellow pants, which complete the set perfectly. A modernized version of these uniforms is something fans desperately want. Wearing them as an alternate would suffice, even if they don’t replace the “Bone” jerseys.

Throwbacks that should stay out of the rotation

Kelly green? Yes. Blue and yellow? No thanks.

This is one of the worst uniforms in sports and it’s a wonder why the Eagles wore them in the first place. They were worn for a 75th anniversary game back in 2007 when Donovan McNabb was the quarterback, but thankfully, it’s not a uniform the Eagles have worn many times.

If they were to bring back this uniform instead of the Kelly Green, fans would riot. There are some jerseys and helmets that should be tucked away in a closet and never brought out. This is one of them.

Back in 2007, the Eagles sported these throwback uniforms to honor the franchise's original colors.

The Broncos wore these uniforms for two seasons when they first became a franchise in the AFL, and then brought them back in 2009 to celebrate their 50th anniversary. There’s just too much to dislike about this combination that it’s tough to find a place to begin.

The vertical stripes on the socks look flat-out embarrassing, the white numbers and white stripe on the helmet don’t belong, and in no way does brown match yellow in any uniform.

The Broncos have an easy decision when it comes to choosing which uniform to bring back. The old-school “D” helmets are way better than these mustard and brown uniforms.

In celebration of their 50th season in the NFL (2009), the Broncos wore these brown, mustard yellow and white uniforms.

In 1960, the original uniforms were purchased from a college all-star game and were used for two seasons before being destroyed in a public bonfire! pic.twitter.com/JppcG2Utaq

The Seahawks have worn lime green uniforms for a while now, using them as their “Color Rush” set. But the uniforms we’re talking about here are the ones before the redesign in 2012. The lime green jerseys with blue pants and blue helmets.

The Seahawks should stay far, far away from this uniform because it is truly one of the worst the NFL has ever seen. They’re somehow even worse than the “Color Rush” uniforms and it’s probably because the white numbers stick out like a sore thumb. Or because the blue shoulders make the green front and back look out of place.

Whatever it is, the Seahawks should refrain from bringing back these uniforms. One ugly lime green set in the rotation is plenty.

Are these the Ugliest uniforms is NFL History? pic.twitter.com/YFdlydgDwW

What were the Jaguars and Nike thinking when they came out with the gold-ish brown uniforms as their “Color Rush” combination?

The Blake Bortles-era uniforms were as bad as any in NFL history, and looked worse when they played against the Titans’ all-blue set on Thursday Night Football seemingly five years in a row.

Thankfully, the Jaguars got rid of this jersey, as well as their unsightly gradient helmet. Their current uniforms are simple and sleek, which is the complete opposite of these gold uniforms. The Jaguars should leave the gradient helmets and “Color Rush” uniforms in the past and never – ever – consider wearing them again.

Jaguars vs Titans: the Adam & Eve of Thursday Night color rush. Or something like that.