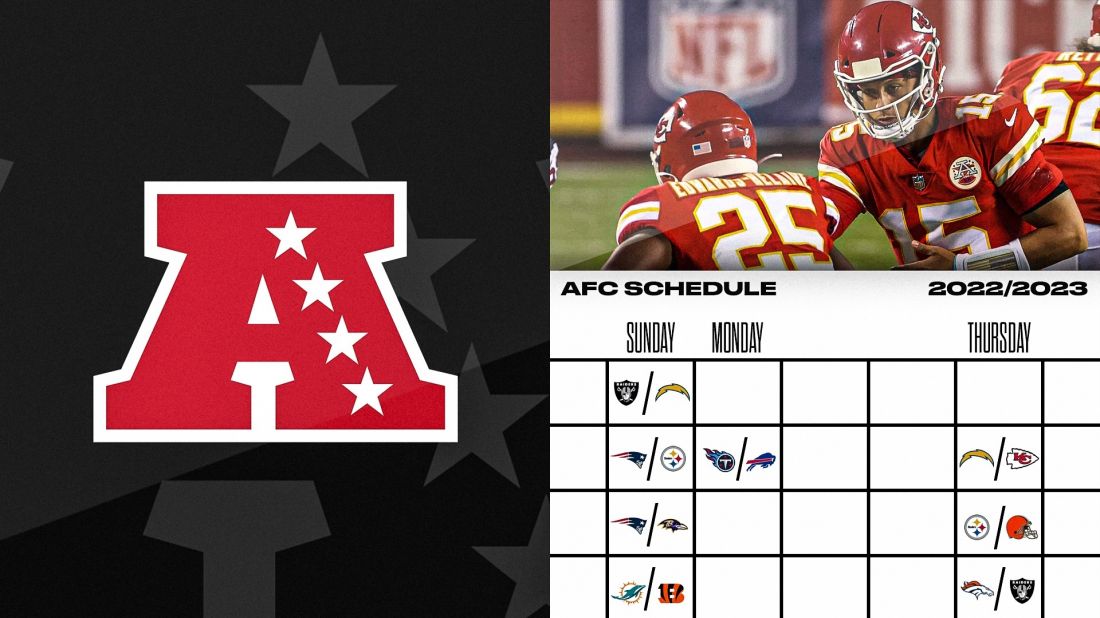 The NFL’s grip on the nation is very apparent when they were able to make a spectacle over the release of its full schedule for the 2022-23 season. Many fans and analysts were quick to build the hype around many primetime games.

One of the primetime games that caught many people’s attention was the season opener. On Thursday, September 8 the NFL will officially kick off in SoFi Stadium with the Bills taking on the Rams – after L.A. raises their championship banner.

Finally, the remaining two games on the traditional 16-game schedule see each team face the other two teams within the conference that finished in the same place in the division as them in 2021. And how the NFL decided the 17th game is for the nerds to look up to.

Strength of Schedule Based on Projected Win Totals

This article is going to rank the entire AFC using projected win totals set by Vegas oddsmakers. Most other strength-of-schedule rankings that you’ll find use the previous season’s combined records of opponents to determine who has the toughest schedule. If you have tried to keep up with the NFL at all this offseason, then you understand teams undergo massive changes in the offseason.

This ˝old˝ method of measuring the strength of schedule simply assumes nothing will change from the previous year. Ridiculous if you ask me. Using projected win totals is not by any means perfect, but the sportsbooks are doing their best to account for the offseason moves as part of their projections. I’ll rank all 16 AFC schedules starting with the toughest (1) and working my way to the easiest (16).

The Chiefs easily took the first spot on this list, partly due to their insane start to the season. The Chiefs will become the first team in NFL history to open a season with eight straight games against teams that finished with a winning record the previous season. To make things harder on the Chiefs, the NFL also made them one of the three teams that will play three consecutive road games at some point this season. Coach Andy Reid will have the Chiefs ready, but I expect a slow start from the Chiefs as they get used to life without Tyreek Hill.

The Raiders' front office made moves this offseason to confirm their belief in Derek Carr and that they want to win now while he is in his prime. Never-the-less it is going to be tough sledding for the improved Raiders due to a schedule packed full of teams that will be competing for the playoffs. The only soft spot in their schedule is after their bye in Week 6 when they host Houston then travel to New Orleans and then to Jacksonville. The final stretch of Las Vegas’ schedule is one of the toughest in the NFL, but they will get to enjoy the comfort of Allegiant Stadium for four of their final six games.

The second-best division in the AFC is the AFC North. The Steelers are predicted to be the worst team in the division this year. The Steelers have a solid roster with a question mark at QB. With solid QB play they will upset some of the teams on their schedule. The first half of the season looks brutal for the Steelers with five of their first eight games on the road against good opponents. This could very easily be the year that breaks coach Mike Tomlin's streak of 15 consecutive winning seasons.

Every game is tough for a team that is in the middle of a total franchise rebuild like Houston. The Texans are facing three teams that will be coming off a bye this year, which is the most in the NFL. This may not bode well for the Texans because teams will have an extra week to prepare for them and to rest their players. But on the other hand, teams could easily relax too much and overlook them during their bye week, which could allow Houston to collect a few sneaky wins.

The Jets have a strange start to their season by playing every AFC North team through the first four weeks of the season. It does not get any easier for the Jets after their tour through the North. Before the second week of October, the Jets will play Miami, Green Bay, Denver, New England and Buffalo. The Jets could definitely get some wins against the NFC North and Jacksonville in the second half of the season.

It’s safe to say the defending AFC Champs have a tough road back to the Super Bowl. The worst stretch for the Bengals comes after their bye in Week 10: Tennessee, Kansas City, Cleveland, Tampa Bay, New England (on Christmas Eve), Buffalo (on Monday night), and Baltimore. The Bengals’ newfound success came in big part because they were able to dominate their division last season. They will need to do the same if they expect to be back in the playoffs.

The Patriots are one of only three teams that will start their season with back-to-back games on the road at Miami and Pittsburgh. They then have the Ravens coming to town before going back on the road to play the Packers. Things get easier in the middle part of their schedule when they will play the Jets twice and have their bye. The final six-game stretch for the Patriots starts and ends with Buffalo and has four teams with projected win totals above .500 in between.

Go figure that the most unpredictable team in the AFC sits in the middle of this list. The Titans have the same likelihood to repeat as AFC South champs as they do of missing the playoffs and having a top-10 pick in next year’s draft. Tennessee benefits greatly from having nearly a quarter of their games scheduled against the Texans or Jaguars. Titans fans should also feel lucky that the AFC South is scheduled against the NFC East this year which slates them against Washington, Philadelphia, Dallas, and New York. They will only need to win a few other games to be in the playoff if they take care of the teams mentioned above.

The Chargers have made enough moves to have many top analysts predicting them to be in the playoffs next year. Sitting at the middle of the list means the Chargers are similar to the Titans and could just as easily over-perform as under-perform. The AFC West and NFC West matchups are all going to be pivotal for both divisions. The Chargers will be visitors in four of their last seven games which will be a momentous stretch for this organization.

Similar to the Chargers because of their offseason additions, the Dolphins are another team that people expect a playoff leap from. They are only one spot different on this list but they do benefit from being in the AFC East, which is paired with the NFC North this season. The Dolphins will need to take care of the Jets twice and the Lions and Bears if they want a good shot at the playoffs. It’s crucial for Miami to find success on the road because they are one of the three teams that will play in three consecutive away games this year.

The Bills have the highest projected win total in the NFL on most Vegas sportsbooks, making them the biggest factor as an opponent. But who’s better to play the defending Super Bowl Champs to kick off the 2022 season than the projected best team? The Bills are one of seven teams that will not face an opponent who is coming off a bye. The Bills should collect wins against the NFC North after their week 6 bye. The Bills are expected to handle their division again, and if they do, they will have the fast route to the No. 1 seed in the playoffs.

The NFL loves good stories and what's better than Russell Wilson returning to Seattle for the first Monday Night Football broadcast of the season. The Broncos have a tough four-game stretch starting in Week 3 with the 49ers, Las Vegas, Indianapolis, and the Chargers. Then, they get a breath with the Jets and the Jaguars. However, the game against the Jags will be played in London on October 30. Like the Bills, the Broncos will not play any teams coming off of a bye. A stacked division is nothing new for Wilson, but it will not be easy to step in and take over the AFC West his first year.

The Jaguars’ schedule is on the easier side because their division will play the NFC East. The Jaguars have a grueling three-game stretch starting with going to London to play the Broncos then home against Las Vegas followed by a trip to Kansas City. Hope should not be lost if Jacksonville fails miserably early on this season because three of their last six games are against the Lions, Jets, and Texans.

The Ravens and the Jets are the first teams in 18 years to be scheduled to play an entire division with their first four games. The Ravens will take on the AFC East and they will play them in the reversed order of the division standings from a year ago – Jets, Dolphins, Patriots, and Bills. The Ravens have a nice soft spot starting in Week 9 against the Saints, followed by a bye and then games with Carolina and Jacksonville. The Ravens and the Browns are expected to fare well against the NFC South next season.

The Browns have a friendly opening to their season with games against Carolina, New York Jets, Pittsburgh, and Atlanta. After Week 4 the Browns will truly get tested by the rest of the AFC East plus the Chargers, Baltimore, and Cincinnati. The Browns have a pretty easy schedule and made some big offseason moves which should combine for some wins. If Deshaun Watson is available and slinging like he used to then this team could make short work of many of their opponents. There are a lot of ifs surrounding Cleveland, but there is no denying they have one of the most talented rosters in the AFC.

Indianapolis is one of the three teams that open the season with back-to-back road games. It’s important to get the “easy” wins against Jacksonville and Houston because the other three are against Tennessee, Denver, and Kansas City. The Colts could taste the playoffs last year and know they are close to winning the division. With the help of the easiest schedule in the AFC, Matt Ryan could be the guy to lead this organization back to the playoffs. The Colts should feel good if they are in the playoff mix late because three out of their last four games are against Minnesota, Houston, and the Giants.