Page: Of Baseballs and Meatballs

Of Baseballs and Meatballs

By John Cerilli | Posted 11 months ago 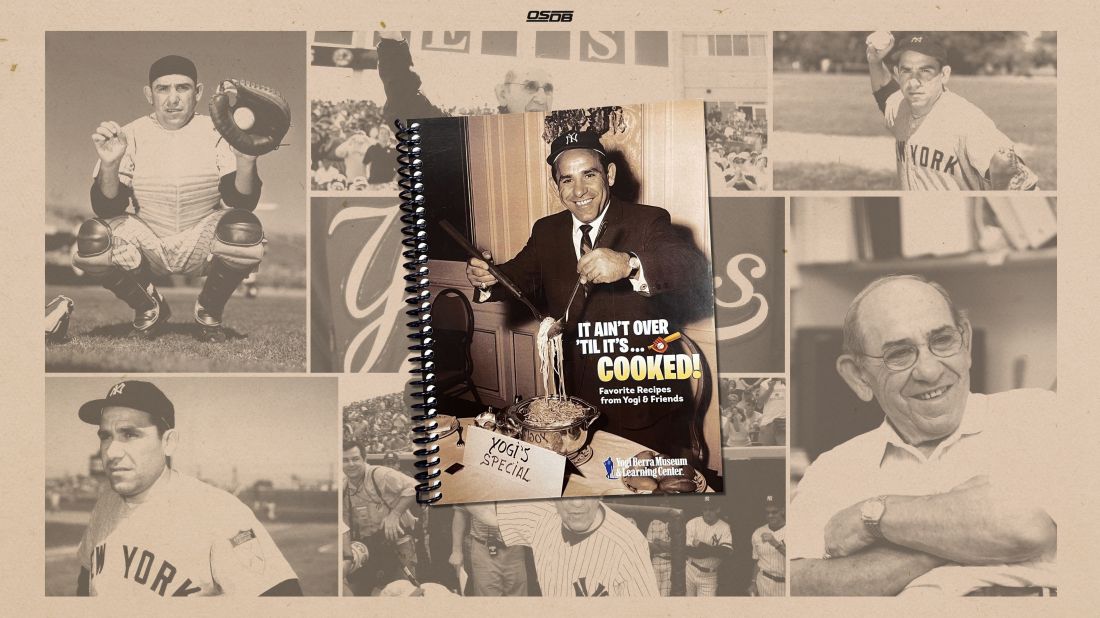 Because of the current lockout, baseball’s Hot Stove League may be relegated to the back burner… But with the newly released “It Ain’t Over ‘Til It’s…Cooked” from the Yogi Berra Museum & Learning Center in Little Falls, NJ, there’s no better time to trade in your batting gloves for a good set of oven mitts.

A labor of love initially planned by Carmen Berra, wife of baseball Hall of Famer and legendary New York Yankee catcher, Yogi, Carmen’s 2014 death came before the project could be realized.

“During Covid, with all the renewed emphasis on staying at home and cooking, we thought it would be fun to revivify the project and even add some new contributors,” said Eve Schaenen, Executive Director at the Berra Museum. “It’s been a great pleasure to see Carmen’s idea become a reality.”

With so much to choose from and the holidays upon us, putting together a festive, tasty meal from some of the greatest athletic performers of all time seems like a no-brainer – especially with how important enjoying food and spending time with family and friends were to the Berras.

“We definitely liked to eat,” said Lindsay Berra, Yogi and Carmen’s eldest grandchild and familiar face to many sports fans from her work with MLB.com, ESPN The Magazine and more. “My grandfather really loved his Italian food. My grandmother loved good food in general. She would eat sushi or Thai food or anything I wanted to eat with her.”

So, to paraphrase one of the great Yogi-isms of all-time, “When you come to a fork on the table, use it!”

For appetizers, we’re going to start where Yogi himself started – in St. Louis with Carmen Berra’s toasted ravioli – a St. Louis tradition, the book tells us. Yogi grew up on The Hill, the famous Italian section of the Gateway City. And just because bacon makes everything better, we’ll also add sugar bacon strips from the kitchen of legendary golfer, Arnold Palmer – proving he’s not just a half-iced tea/half-lemonade drink after all.

A pasta course brings the Berras famous meatballs – a staple of their holiday traditions – and their take on baked ziti (with a mix of four cheeses).

“The day or two before Christmas or Thanksgiving, Grandpa would make the meatballs,” Lindsay Berra said. “And what I mean by Grandpa making the meatballs is that Grammy Carmen would mix up all the stuff in the bowl and Grandpa Yogi would roll the little balls. And the kids, if anyone was around, would help roll them.”

Carmen would then put them in a giant lobster-style pot on the stove, “One of those super tall ones,” Lindsay said, and let them simmer. “We had so many people at the house and we’d have a couple hundred tiny meatballs. You would eat them out of bowls with toothpicks.”

Now, don’t eat TOO many of those meatballs because you’re going to want some ziti and the upcoming main course.

Lindsay made the four-cheese baked ziti herself last Christmas using her Grammy Carmen’s recipe that’s faithfully recreated in the book.

“One of the four cheeses is Gruyère which is very atypical for a baked ziti, but it’s really good because it’s a little sharper and a little nuttier,” Lindsay said. “It kind of cuts that ultra-rich creaminess of all the other cheeses. I actually love that baked ziti recipe.”

As for the main course, we’re going to go with Hall of Fame pitcher, Fergie Jenkins’, glazed stuffed pheasant.

The stuffing includes rice, finely chopped almonds, onions, butter and it’s flavored with salt, sugar, thyme and orange rind – the last of which complements the orange glaze served with the roast bird and stuffing.

“My Dad and I used this recipe many times during pheasant season,” said Jenkins’ for the book.

If you make it to Wrigley Field in the coming New Year, keep an eye out for the statue honoring Fergie. It makes its debut outside Wrigley in 2022, pheasants not included.

For sides to this grand meal, we’ll add some Italian Spinach from the kitchen of Arlene and Elston Howard, another Yankee catching great and the first African-American to don the pinstripes. A German potato salad from Hall of Fame manager, Whitey Herzog. And, finally, because you can never have enough pasta, a fusilli salad from Gil Hodges, Jr. whose father will be inducted into the Baseball Hall of Fame as part of the class of 2022 (finally!).

As for dessert, if you have room for it after everything we’ve ingested to this point, we’ll let you choose for yourself from one of the 10 different the book offers from the likes of the aforementioned Feller and Torre to Hall of Fame reliever Bruce Sutter and Yankee radio booth legend, Suzyn Waldman.

“The cookbook feels like an immediate connection to Carmen and to Yogi, to their spirit of hospitality and graciousness, to their strong sense of family and community,” said Schaenen. “I wrote in the book’s forward that food – like baseball – connects people across generations. Creating this cookbook made us all feel connected to Carmen and Yogi’s legacy in a tangible way.”

And if you have even the slightest inkling of having your holiday meal at a restaurant, fuhgeddaboudit – remember what Yogi said, “Nobody goes there anymore. It’s too crowded.”