By Holly Cain | Posted 7 months ago 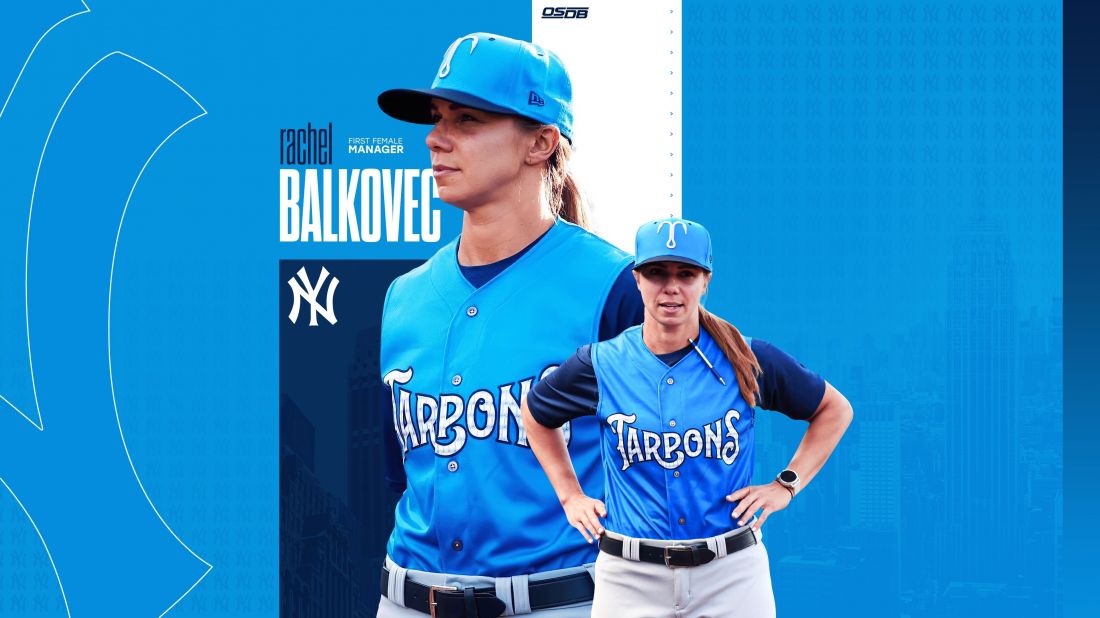 Under a cloudless bright blue late afternoon sky, Rachel Balkovec, 34, walked from the outfield down the right-field foul line at Lakeland, Florida’s Joker Marchant Stadium last Friday. Before she could make it to first base, she was beckoned by a smiling energetic crowd of fans standing at the fence having arrived hours before the first pitch just to ask for an autograph in their programs and to wish her good luck.

About four hours later – following fireworks and a half-hour of signing every single autograph request by a larger group of fans next to the visitor’s dugout - Balkovec strode back down that first base line.

The first female manager in baseball history led the Tampa Tarpons Single-A team to a dramatic 9-6 victory over the Lakeland Flying Tigers.

And again, Balkovec was stopped just before the locker room entrance in right field. This time it was a Major League Baseball official who asked her to sign a ball, her cap and a Tarpon jersey – all bound for the Baseball Hall of Fame.

“On one level this is drawing young people to the game, female or male, but this moment transcends sports,’’ Balkovec said of the historic night, smiling and conceding she was humbled by the hours-long chants and cheers in her honor.

“They may not know about Minor League Baseball but they showed up for this moment.

“Sports always brings so many people together from different backgrounds and in my case, a different gender. And once you’re together in that same room, you realize, you’re all just human beings and you’re going after the same thing.

“So, I think, that speaks to the fact this moment transcends sports and that sports is a beautiful way to bring different backgrounds together no matter who you are or where you’re coming from. “

The “opening day” crowd of nearly 3,000 was largely and distinctively female from youth teams making a night of it to young girls wearing pink shirts of support. Dads brought their daughters. Coaches brought their players.

“We’re here to support her and cheer her on, it’s just very, very cool,’’ said Madison Farrelly, 13, a seventh-grade athlete, whose entire middle school sports program attended the game to support Balkovec and be part of history.

For Balkovec’s team, it was more than a win, it was a social victory. And the excitement was evident as Balkovec’s players high-fived and hugged their manager on the field after the final out.

“It was an honor to play in the game and I feel very humbled,’’ Tarpons outfielder Jason Dominguez said. “We just wanted to get that first win out of the way to give her some confidence in her new role and it was important to get that done today.

“I will never forget this day.”

For Balkovec, it was a long-time coming. As gracious as she was in noting the overwhelming support, she reminded all that she had no doubts that this was her path from a very young age.

Hours earlier at the Tampa Tarpons’ ballpark – George Steinbrenner Field - Balkovec walked into the press room and immediately went over to hug and greet her parents, Jim and Bonnie Balkovec, who were sitting quietly in the last row of seats having flown in from in Omaha a couple hours earlier.

While taking questions from reporters, Balkovec often looked at her parents as she recounted lessons from her youth. She said she always recognized and appreciated how she and her two sisters were raised -never told “you can’t do that” simply because they were girls.

With her parents smiling and nodding in the back of the room, Balkovec – the middle child - laughed as she recalled telling people as a third-grader that she was going to be a punter in the NFL one day.

Balkovec, a catcher for the University of New Mexico softball team went on to earn a Master’s Degree in sports administration from LSU. She is bilingual and for the last decade has had roles as a minor league strength and conditioning coach with the St. Louis Cardinals, Houston Astros and Chicago White Sox minor league organizations. She was a hitting coach last year with the Yankees rookie team, which led Florida Complex League in runs scored, home runs and RBI.

She met many of her current Yankee players while working with that rookie league team. And while Balkovec’s opportunity is certainly ground-breaking for everyone else, her players are not surprised that she has risen through the ranks and earned this historic opportunity.

“It’s unique and different and a big day in history, especially for women’s history,’’ 22-year old Tarpons pitcher Chandler Champlain said. “I’m proud and privileged to be part of this opportunity. It’s a day that’s going to go down in history.

“I have nothing but respect for women amazing female athletes. Just a really proud day for the organization of the New York Yankees and I just think women’s culture in sports. Just a great day.”

Balkovec openly shares that her career trajectory has not been easy. When you are the first at something there are no tried-and-true directions to follow. But certainly seeing her team support her, the crowd embrace her was a huge boost of reassurance.

And knowing that she has taken that “next: step forward is a powerful motivation for her – and for so many others to follow.

“At some point, you have to look at yourself and say, ‘what is my purpose on this planet?’ Balkovecexplained at her pre-game press conference. “And If I don’t do this, who else is going to come in behind me and do it? And if the answer is ‘okay, it’s me,’ then I don’t feel I have a choice.

“I don’t feel like I’m making history, I feel like the Yankees are making history because for me, I have made some difficult decisions in my career that have required a lot of discipline,’’ she continued. “The world has changed, society has changed, baseball has changed. This was simply, the organization saw potential in somebody and asked me to be in that role.”

And after the stadium emptied, the lights dimmed and Balkovec could finally take a deep breath after such a heart-pumping, high-expectation day, she stood in the outfield and looked out at the scene.