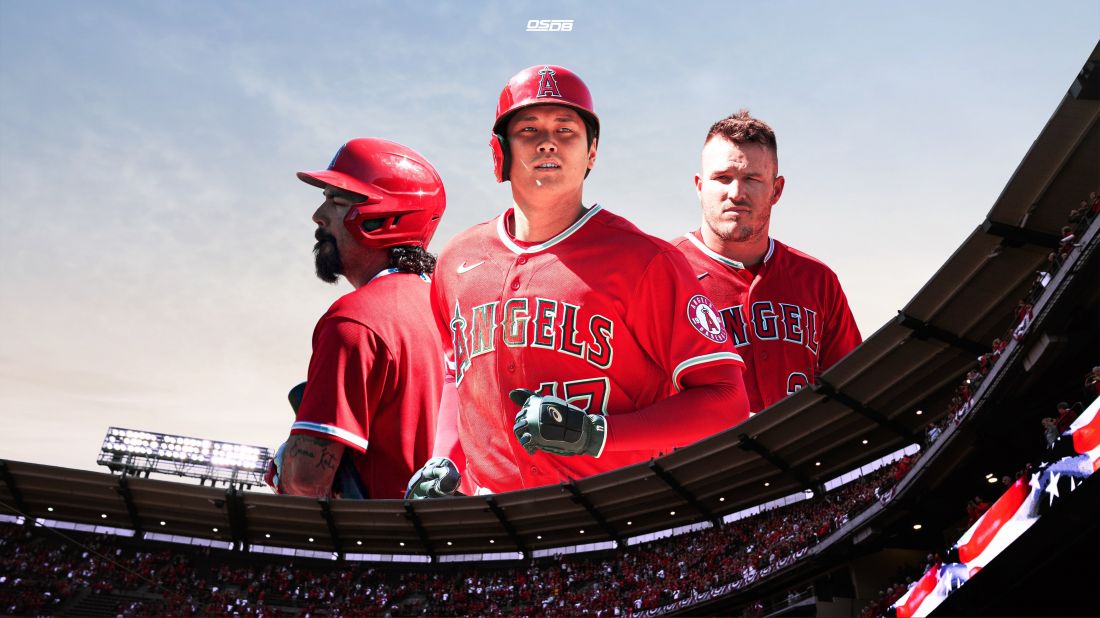 Since the ‘60s when the Bloods gang was formed to rival the Crips gang, the streets of Los Angeles have been torn between red and blue. Around the same time, L.A. gained a baseball team that also wore red, but baseball fans knew one color – Dodgers blue.

After the Dodgers won their seventh World Series in 2020, the hype around the organization hit levels that hadn't been seen since the ‘80s. Los Angeles was back on top of the baseball world after a 31-year drought for the Dodgers.

Even though it was less than two years ago, people are quick to forget and they are always after the next best thing. The blue around L.A. is starting to fade and more people are wearing red.

It’s not hard to understand why the Los Angeles Angels are starting to draw the attention of fans around the world. People love watching the best players play, no matter what team they are on. That’s why analysts are constantly arguing about who the top players are in major sports – but not in baseball this year.

We can all confidently say that the two best players in the MLB play for the Angels. Shohei Ohtani and Mike Trout have already individually accomplished things in the MLB that were previously thought to be impossible. They are doing things that were only imaginable in video games before the two unicorns came around.

Trout was the unanimous choice for AL Rookie of the Year in 2012 and has practically been the best offensive player every year since. It only takes watching Trout play one game to understand that he is extremely special, but what he has accomplished in today’s advanced analytics is mind-blowing.

WAR stands for “Wins Above Replacement.” WAR is a statistic showing how many more wins a baseball team has from a player. WAR was added to Baseball-Reference in 2010 and arrived at just the right time to help us appreciate Trout.

Trout’s ‘real value’ could properly be assessed because WAR is able to measure value based not only on batting, but fielding, and base running as well. These advanced stats have helped him become the winner or runner-up in six out of the last eight MVP voting. Trout has dominated nearly every statistical corner of baseball – except pitching.

That's where Ohtani enters. Six years after Trout, the 6-foot-4, 210-pound Japanese phenom captured the AL Rookie of the Year. As a rookie in 2018, Ohtani joined Babe Ruth as the only MLB players with 10 pitching appearances and 20 homers in a season. His following two seasons were derailed with injuries, but it did not stop Ohtani from taking MLB and fans around the world by storm in 2021.

Last July, during his 15th start of the season, Ohtani became the first pitcher in league history to register 100 strikeouts while having pounded a major-league-leading 35 home runs. Ohtani would finish the month of July as the first player in Major League history to have at least 37 home runs and 15 stolen bases before the end of July.

Ohtani went on to finish the year as the best player that baseball has seen.  Ohtani became the first player in MLB history to have at least 45 homers, 25 stolen bases, 100 RBIs, 100 runs, and eight triples in a season. Accomplishing things behind the plate that had never been done all while being the starting AL pitcher in the All-Star Game. Ohtani is the first MLB player to achieve 100+ innings and record 100+ strikeouts as a pitcher, and 100+ RBIs, hits, and runs as a batter in a single season.

Angels manager Joe Maddon was clear about what he is witnessing when he was asked about what Ohtani is doing for his team on a recent podcast episode of ESPN’s Mason & Ireland. “Man lands on the moon. The wheel is invented. Kinda like that. Once in a lifetime moments.”

He went on to compare Ohtani to Halley's Comet (which is visible in the sky every 75 years) and reiterate that what he is doing is something very special. “There is nobody that is going to come along in the near future and replicate, even close, to what he is doing right now. It’s one of those things you just don’t see.”

Maddon wants fans to remember to “not take it for granted” when they get to watch Ohtani play and not to grow to expect him to strike out 10, hit a home run, and steal a base in the same game. “No one else can do that,” Maddon reminded the listeners.

Then the hosts of the show asked Maddon about his approach to coaching a guy like Ohtani, and Maddon had the perfect answer. “Guys like that, honestly, this guy is kind of a genius at what he does, and I don't like to interfere with genius – when he’s rolling the best thing I can do is to stay out of the way. Let him play and try to only interfere when it’s necessary. Primarily to keep him fresh and to keep him from hurting himself.”

Angels Primed for the Playoffs

It really should be no surprise that the Angels are having a ‘hot’ start. With the two best players in the MLB, Los Angeles put together a roster that could make it back to the playoffs for the first time since 2014.

When World Series-winning manager Maddon was asked if he is surprised by the “hot” start to the season. “I thought we were good coming out of camp but no one wanted to hear it at that time.” He went on to say, “The biggest surprise possibly may be the defense. (Andrew) Velazquez at shortstop primarily. What he’s done on a nightly basis – he has been really fun to watch.”

Maddon is excited to see Velazquez get to play alongside David Fletcher in the middle infield once Fletcher gets off the 60-day-IL. Velazquez has filled in magnificently for Fletcher who was placed on the IL after playing in just 15 games this season.

Pitching is the Key

The first quarter of the season is in the books and the Angels are in second place in the AL West with a record of 26-17. Los Angeles has the fourth-best record in the American League and is sitting 1.5 games back of the Houston Astros.

Maddon was quick to give credit for the early success to the pitching staff. Behind the right arm of Ohtani, the Angels pitching staff has the fifth-lowest ERA (3.37) in the MLB. Left-hander pitcher Patrick Sandoval has taken a big leap in his fourth season and is leading the team with a 1.79 ERA.

Entering Monday, the Dodgers (27-13) have the second-best record in all of baseball behind only the New York Yankees. Even with plenty of the national spotlight switching to the Angels, the star-studded Dodgers keep on winning.

The players of the Dodgers probably do not think or feel any pressure from the Angels, but you have to imagine the front office must be feeling some heat. L.A. is all about the stars, and there are none bigger than Trout and Ohtani in baseball right now. The Angels who have already started gaining fandom around L.A. could take over the city if the Dodgers start to fail and miss the playoffs.

It would only take a year of the Dodgers failing and the Angels having success for young fans in one of the biggest sports markets in the world to abandon the Dodgers for the Angels. People want to watch the best and right now the two best wear red in L.A. Get on the bandwagon before it’s too late, because the Angels may be what everyone is talking about as the 2022 season draws to a close.