By Steve Tsilimos | Posted 16 days ago 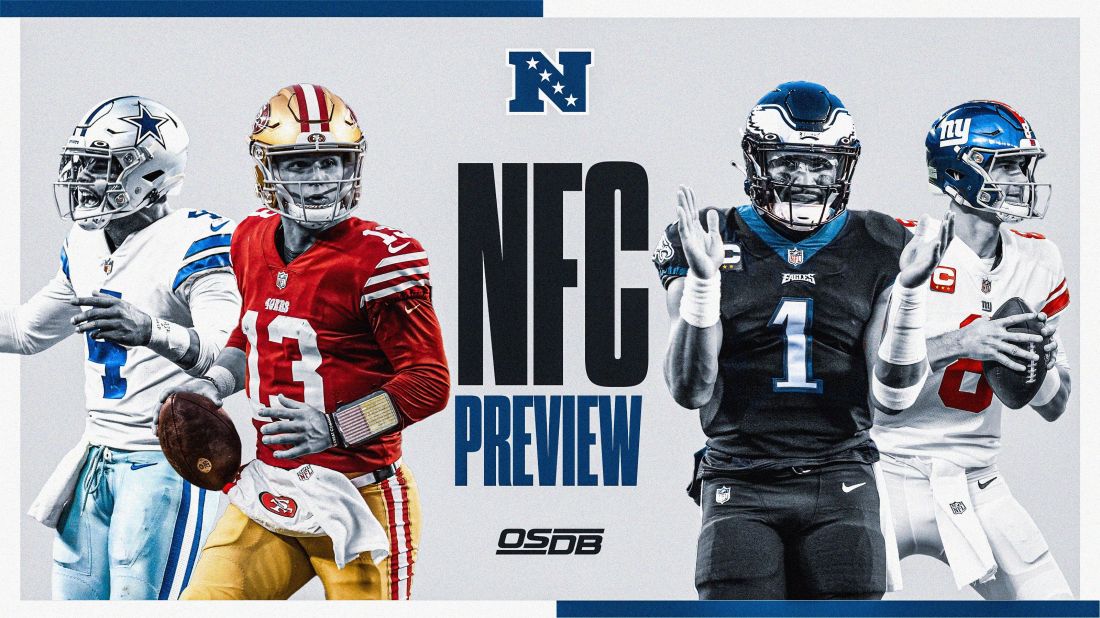 The 49ers started Super Wild-Card Weekend with a 41-23 dismantling of the Seahawks. The Cowboys capped off a fantastic weekend of playoff football with their first win over Tom Brady in his 23-year career by dominating the Buccaneers, 31-14.

The weekend's biggest upset came when the 9-win Giants upset the 13-win Vikings. Although the Giants were the sixth seed, many people predicted that the Vikings would choke. The Vikings' miraculous season came to a crashing halt as the Giants' offense ran all over their horrendous defense.

This coming weekend there will be two games played on Saturday, Jan. 21, and two on Sunday, Jan. 22. Saturday features the two No. 1 seeds, which have yet to play a playoff game. And Sunday, we see each conference's No. 2 seed try to keep their winning streaks alive. The NFC will be the conference slated with the late games on each day.

This one should be fun 🍿@Giants vs. @Eagles next weekend in Philly 🔥 pic.twitter.com/SZooTv3H7s

The Philadelphia Eagles will play host to their division rivals, the New York Giants, on Saturday night. The win-or-go-home battle will be the third time these teams have played over the past seven weeks. The Eagles destroyed the Giants in the first matchup, 48-22. Then despite winning 22-16, the Eagles struggled against New York's backups two weeks ago in the season finale.

It’s never easy to beat a team three times in a season, and I am sure the Eagles know they will have their hands full with the surging Giants. But many Philadelphia fans are counting their blessings that it’s the G-Men coming to town and not the Cowboys who beat them on Christmas Eve. Although New York ranked in the middle of the pack for scoring offense during the regular season, the Giants offense is hitting its stride at the perfect time.

Daniel Jones has become one of the best dual-threat QBs in the league, making the Giants' offense dangerous. In the Giants' win over the Vikings, Jones became the first QB in postseason history to record 300+ passing yards, 2+ passing TDs, and 70+ rushing yards.

The sixth overall pick of the 2019 draft has taken some lumps in New York as the Giants have cycled through coaches during his tenure. But as we have seen so many times in the NFL, QBs usually hit their stride in their third or fourth year, especially ones who are picked early and are playing on teams that are not very good. Jones was taken early in the draft because he measured out as a great athlete at the QB position, but there were questions if he could turn into an efficient pocket passer.

With a competent coach and some years under his belt, he proved he is more than capable this season. Jones’ 67.2 completion percentage ranks fourth in the NFL (minimum 400 attempts), which is ahead of MVP front-runner Patrick Mahomes.

Jalen Hurts had similar questions surrounding his passing ability as he entered his third season. He silenced the doubters with an MVP-level season, throwing for 3,701 yards, 22 TDs, 6 INTs, and had a passer rating of 101.6. Hurts also rushed for 760 yards and 13 TDs, one shy of Cam Newton’s record of 14 rushing TDs by a QB in a season.

Hurts’ value was seen when he was sidelined toward the end of the season. The Eagles were 12-1 with Hurts as their starting QB, then they lost two straight without him. Hurts conservatively played in Week 18 to help the Eagles clinch the one-seed and give him a week off to heal his sprained throwing shoulder. He still may not be 100% for this game, which could change play calling and his effectiveness and ultimately impact the outcome.

Jalen was 5-0 this season vs playoff teams 🔥🔥

Eagles
14-1 with Jalen
0-2 without Jalen pic.twitter.com/WfsOQI1cc9

Why the Eagles will win:

The Eagles are better at every position group other than running back and kicker. They have a significant advantage on the defensive side of the ball. They have a better defensive line, linebacker group, and secondary than the Giants. The Giants have to be able to run the ball efficiently, or the Eagles' top-ranked pass defense will dominate the Giants’ passing attack.

In the Week 14 matchup, the Eagles held New York running back Saquon Barkley to 28 rushing yards. Philadelphia will once again make Barkley the key focus of their defense, forcing someone else to beat them. The Eagles will wreck the Giants' offense if they are constantly in obvious passing situations. Their defense has the ability to get after the QB and is backed by the best secondary in the game.

On the offensive side of the ball, the Eagles have one of the most balanced attacks in the NFL. They have the ability to take what the defense gives them. This works exceptionally well because they have some of the league's best WRs, TEs, and RBs to go along with a dual-threat QB who is reading the game well. WRs A.J. Brown and DeVonta Smith both went over 1,000 receiving yards this season, while RB Miles Sanders ranked fifth with 1,269 rushing yards.

How the Giants can win:

The New York Football Giants are outmanned but can control the ball with Barkley and Jones's rushing ability. Barkley looks healthy and is one of the most dangerous backs in the NFL when he is 100%. Jones led the Giants' rushing attack with 70 yards in the win over the Vikings, converting seven first downs with his legs. If the Giants can stay ahead of the chains and break a few 20+ gains, as they did against the Vikings, there is a good chance of an upset.

The Giants' defense was average during the regular season, but they started playing better over the past month. Over the last three regular-season games, they only gave up an average of 315 yards. Coordinator Wink Martindale's defensive improvements were displayed in the wild-card round, giving up 332 yards to a high-powered Minnesota offense. New York’s defense will need to be good on third down like they were last weekend, allowing the Vikings to convert on four of their ten third downs.

The Giants have already exceeded expectations this season and have nothing to lose in the divisional-round of the playoffs. They will be able to play with no pressure on them, which should mean they play loose. Teams that are able to stay loose in the playoffs seem to play better and find ways to win.

Prediction: Eagles make the stops down the stretch to clinch the game 34-27.

Giants vs. Eagles
Cowboys vs. 49ers

The 49ers look like the most complete team in the NFL They have the best defense and have won 11 straight. QB Brock Purdy looks like a seasoned vet and is efficiently distributing the ball to a plethora of All-Pro weapons.

The Cowboys also have a plethora of offensive weapons and a first-class defense. Dallas is coming off its first road playoff victory in 30 years. They are looking for revenge from the 2021 playoffs, where they saw their season end at the hands of the 49ers in the wild-card round.

This game features two of the best pass-rushers in the NFL, Micah Parsons and Nick Bosa. The outcome could come down to which one of those guys disrupts the game the most or, at the least, which defense creates the most turnovers.

Brock Purdy broke the NFL’s all-time record for passer rating among rookie QB’s, finishing at 107.3 on the year

He ranks second among rookies all-time in TD% and third in completion percentage and yards per attempt, among other metrics pic.twitter.com/I6Ajl6SN3t

I’m sure you have heard by now that the 49ers’ rookie QB was the last pick in the draft. He has gone from “Mr. Irrelevant” to one of the hottest QBs in the league. Kyle Shanahan’s offense is very QB-friendly, but Purdy continues to make plays that you wouldn’t expect a rookie QB to make consistently.

Dak Prescott has had a rocky season, but he is coming off his best game of the season in the wild-card round. Prescott outplayed Tom Brady, accounting for all of the Cowboys' five TDs (four passing, one rushing). Prescott ended a streak of seven straight games where he threw at least one interception. He threw 11 INTs in his past seven starts before Monday and was tied for the season-high of 15 INTs, even though he only played in 12 games.

During the regular season, the 49ers' defense tied for first with 20 INTs. They will be looking to put pressure on Prescott and capitalize on some errant throws. The Cowboys need Prescott to take care of the ball and convert third downs, or the 49ers could dominate this game.

Dak Prescott has highest passer rating (143.3) in a playoff game in @dallascowboys history

Purdy playing near-perfect football makes this team nearly impossible to beat. They have great offensive and defensive lines and game-changing players at every position. The 49ers' front office has built a roster to fit Kyle Shanahan’s scheme perfectly, and they are finally healthy as they enter the postseason.

The mid-season addition of RB Christian McCaffery may go down as the best mid-season trade by any team ever. He is the perfect fit to go along with WR Deebo Samuel because they both put pressure on defenses in a multitude of ways. Add in Purdy’s favorite target TE George Kittle, and this offense is a defensive coordinator's worst nightmare.

Defense wins championships, right? Well, if that is the case, then the 49ers have the best shot at winning the Super Bowl. Their No. 1 ranked defense is healthy and disruptive at every level. Bosa had a fantastic season and is the current odds favorite to win the DPOY award. Bosa recovered a fumble in the Wild-Card game that swung the course of the game in the 49ers' favor for good.

Something that shouldn’t be overlooked is that the Cowboys played on Monday, giving the 49ers two extra days of rest since they played on Saturday. The 49ers get to play in Santa Clara in front of their home crowd, which also could impact this game.

How the Cowboys can win:

Prescott needs to outplay Purdy, and Micah Parson could be the reason that this happens. A heavy dose of Ezekiel Elliott and Tony Pollard is precisely how the Cowboys can beat the 49ers.

Playing on a short week could hurt the Cowboys in a big way if their former All-Pro OT Jason Peters cannot recover from a hip injury he suffered on Monday night. Peters will be matched up with Bosa for most of the day, which is a brutal assignment even if he is 100% healthy.

The Cowboys need to control the ball and create turnovers to upset the 49ers this weekend. Stopping the 49ers' rushing attack will be challenging, but it will be critical to the Cowboys' ability to create consistent pressure on Purdy. Pressure could result in turnovers which would swing the game in the Cowboys' favor.

Prescott has to take care of the ball and take what the 49ers give him. If he can play within the system and get a few extra chances with the ball because his defense creates turnovers, then the Cowboys may just find themselves one win away from an appearance in Super Bowl LVII.

Prediction: 49ers cruise to victory as Purdy plays another fantastic game, and the 49ers' defense wins the turnover battle 31-20.

I promise this one piece will prepare you for 49ers-Cowboys — the most glamorous NFL rivalry there is — more than anything: https://t.co/JgMWAf7QWy