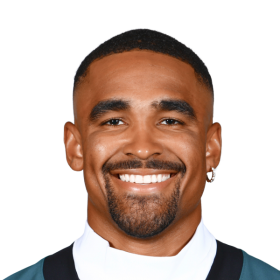 Sweet news: Lemonade Days is returning to June! Every year, supporters from all over set up stands and events to raise money and awareness for pediatric cancer research. Register your lemonade stand today and make every cup count toward cures.

Hurts attended Channelview High School in Channelview, Texas. Hurts's father, Averion, was the football coach at Channelview High School throughout his sons' high school career. As a senior, he passed for 2,384 yards with 26 touchdown passes and rushed for 1,391 yards and 25 touchdowns. Hurts was a second-team all-district selection as a sophomore and was named the District 21-6A Overall MVP as a junior during his high school playing years. He played against the Texas A&M freshman standout running back Trayveon Williams throughout his high school career. Hurts was rated as a four-star recruit and was ranked among the top dual-threat quarterbacks in the Class of 2016. Although Texas A&M made a strong push to recruit Hurts after the departure of their starting quarterback, Kyler Murray, they ultimately failed in their efforts after Hurts proceeded to commit to the University of Alabama on June 5, 2015. He was recruited by Alabama's Defensive Line Coach Bo Davis and Offensive Coordinator Lane Kiffin.

In addition to football, Hurts participated in powerlifting. As a sophomore in high school, Hurts was squatting 500 pounds of weight. He would eventually become Regional Finalist in the Powerlifting 198-pound weight class.

On December 3, 2016, he led his team to win the 2016 SEC Championship over the Florida Gators and was subsequently named SEC Offensive Player of the Year, SEC Freshman of the Year, and received Freshman All-American from several publications. Hurts was featured on the cover page of Sports Illustrated College Football Playoff magazine on December 6, 2016. On January 9, 2017, top-seeded Alabama lost the 2017 College Football Playoff National Championship against the Clemson Tigers by a score of 35–31. The bowl game was played at Raymond James Stadium in Tampa.

In the 2018 SEC Championship Game, he relieved an injured Tagovailoa and led the team to a comeback victory against Georgia. Alabama moved to 13–0 and secured a spot in the Playoff.

Hurts completed his B.A. in communication and information sciences in December 2018.

On January 16, 2019, Hurts announced via social media that he would be transferring to the University of Oklahoma for his final year of eligibility. As a graduate transfer, he was eligible to play for the 2019 season.

In his first game as a Sooner on September 1, 2019, Hurts shattered Oklahoma's single-game yardage record in a debut (previously held by Baker Mayfield when he put up 396 yards of total offense against Akron in 2015), putting up 508 yards of total offense against Houston. On September 28, in a 55–14 victory over Texas Tech, he had 415 passing yards, three passing touchdowns, and one interception to go along with nine carries for 70 rushing yards and a rushing touchdown. Hurts helped lead Oklahoma to a 7–0 start to the season. The team's first setback came against Kansas State on October 26. In the 48–41 loss, Hurts passed for 395 yards and a passing touchdown to go along with 19 carries for 96 rushing yards and three rushing touchdowns. Hurts helped lead Oklahoma to a Big 12 Championship and a spot in the College Football Playoff. The Sooners' season ended with a 63–28 loss to LSU in the 2019 Peach Bowl. Hurts recorded a successful season with the Sooners, recording 3,851 passing yards, 32 passing touchdowns, and eight interceptions to go along with 1,298 rushing yards and 20 rushing touchdowns. He finished second in the Heisman Trophy voting to Joe Burrow.

The Philadelphia Eagles selected Hurts in the second round, with the 53rd overall pick, of the 2020 NFL Draft.

Before the start of the 2021 regular season, Hurts switched his jersey number to No. 1, which had become available with the departure of punter Cameron Johnston. On August 31, 2021, Hurts was named the starter for the regular season by new head coach Nick Sirianni.

In the season opener against the Atlanta Falcons, Hurts led the Eagles to a 32–6 victory, throwing for three touchdowns and a passer rating of 126.4. During a Week 12 loss to the New York Giants, Hurts suffered an ankle injury which kept him out for the following week's game against the New York Jets.[47] The Eagles won that game 33–18 led by backup quarterback Gardner Minshew.[48] Hurts returned after the bye week in a Week 15 matchup against Washington en route to a 27–17 victory.

Hurts helped lead the Eagles to a playoff berth after defeating the Washington Football Team 20–16 in Week 17 and with wins from the San Francisco 49ers and Green Bay Packers later that day. On December 23, 2021, Hurts was named a 2021 Pro Bowl NFC alternate. In the 2021 season, Hurts finished with 3,144 passing yards, 16 passing touchdowns, and nine interceptions to go along with 139 carries for 784 rushing yards and ten rushing touchdowns. He led all quarterbacks in rushing yards and rushing touchdowns in the 2021 season.

In the Wild Card Round against the Tampa Bay Buccaneers, Hurts threw for 258 yards and a touchdown, but fumbled once and threw two interceptions in the 31–15 loss.

Hurts finished the 2022 season with a starting record of 14–1, tying a franchise-best (with Randall Cunningham) 35 total TDs (22 passing, 13 rushing) to just six interceptions, 3,701 passing yards, and a 101.5 quarterback rating. As a result of his play in the 2022 season, Hurts was named to his first career Pro Bowl, and was a Second Team All-Pro. On January 25, 2023, Hurts was named as one of the five finalists for the NFL Most Valuable Player Award.

On January 21, 2023, Hurts led the Eagles to a 38–7 victory over the New York Giants in the Divisional Round of the 2022–23 NFL playoffs. In doing so, Hurts won his first playoff game, and later led the Eagles to a 31–7 win in the NFC Championship Game against the San Francisco 49ers in which he threw for 121 yards, 39 rushing yards and a rushing touchdown in his first NFC Championship victory. 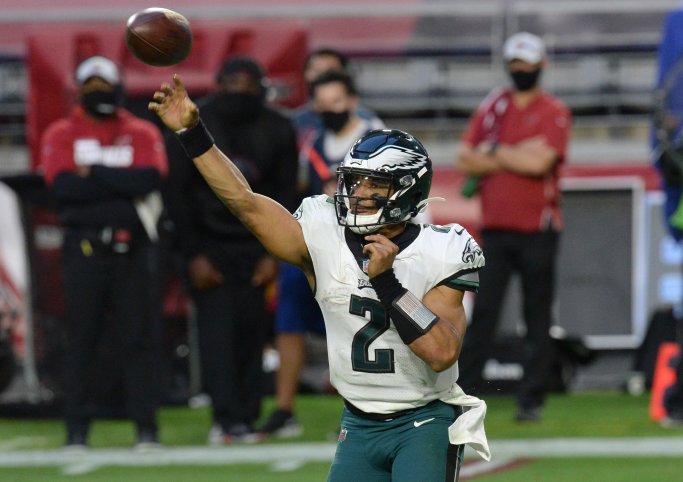 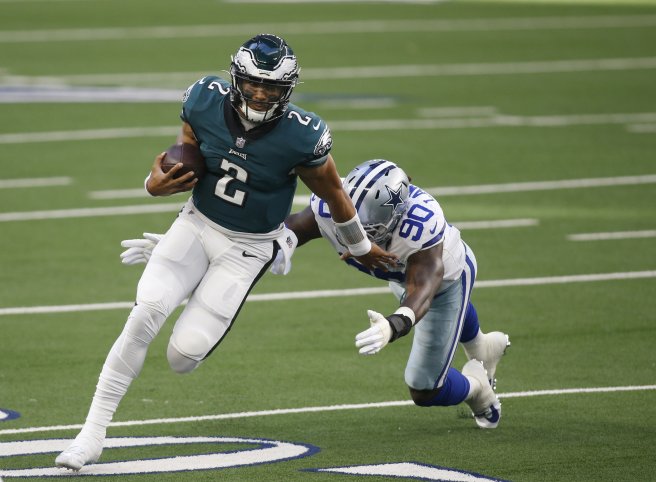 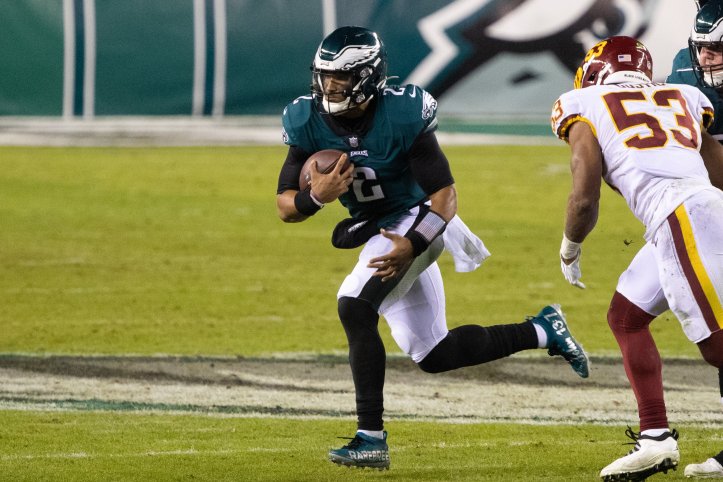 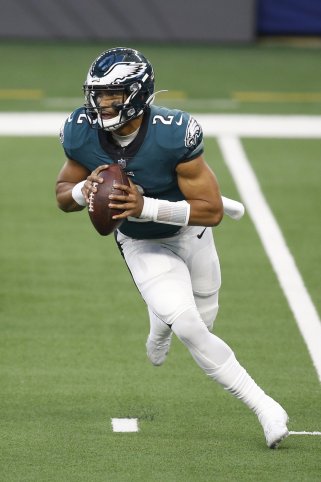 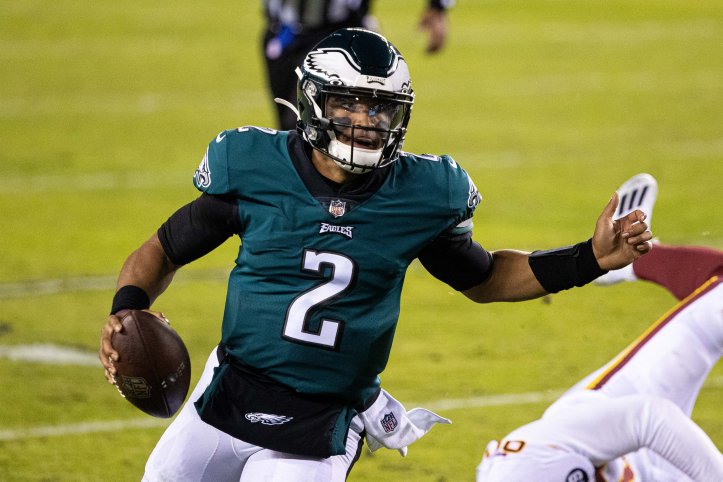 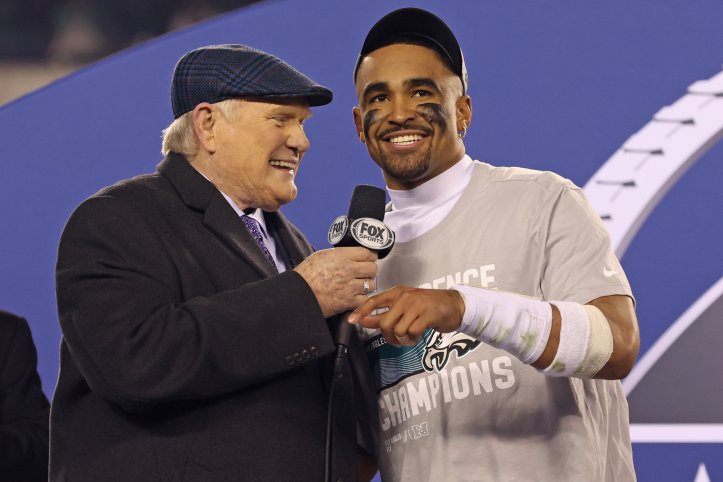 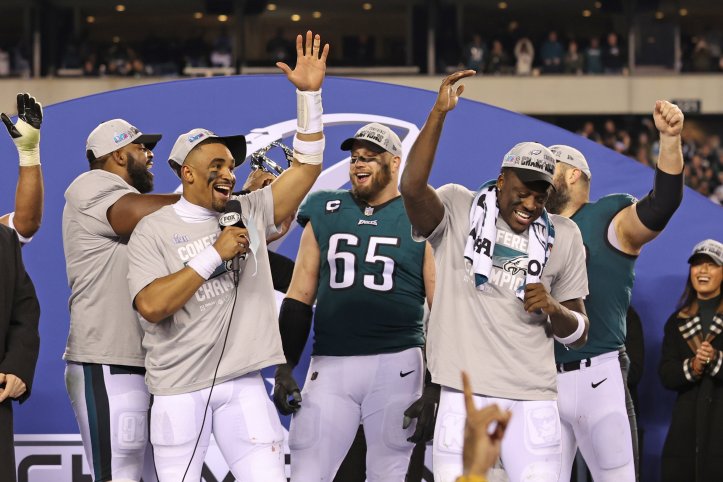 RT @TrevonDiggs: @JalenHurts Really a winner. Proud to have witness all your hard work and dedication to the game. True leader 🤝 much respe…