Page: Serena Williams wears the title of GOAT with grace

By OSDB Staff | Posted 3 months ago 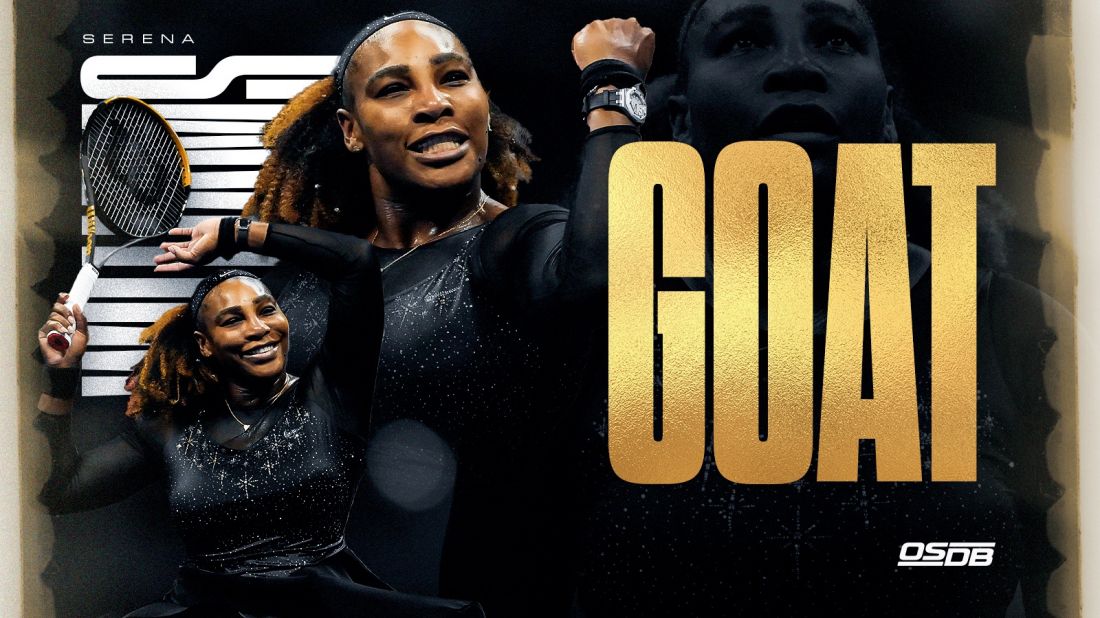 The US Open was supposed to close the curtain on Serena Williams' career.

Instead, it has produced thrills that only someone who wears the crown GOAT can deliver.

Even if she loses Friday or Sunday, Williams’’ first two matches have produced remarkable athleticism and theatre.

“I mean, it was hard … it was something I never experienced before,” second seed Anett Kontavei said after her second-round loss in three sets. “I don’t think it’s a personal attack against me or anything. I mean, it’s fair. I definitely had no shame losing to Serena. It was very difficult with the crowd.”

With tonight's win, Serena Williams has now won 23 of her last 25 matches vs WTA Top-2 players dating back to 2007.

Her 48 match wins vs WTA Top-2 players are the most by any player since the rankings were introduced in 1975. pic.twitter.com/5TsD6NYmW9

The crowd’s raucous support of Williams also brought a display of sportsmanship from the 23-time Grand Slam champion. When it reacted with boos after a call went in favor of Kontavei, Williams stopped and admonished the audience. She gestured to all telling the fans their behavior was unacceptable.

And that shows how Williams has grown and matured through the years. She hates to lose, perhaps more than any athlete. At a couple of previous US Opens that drive has led to ugliness and controversy, perhaps adding polarizing to all the great qualities Williams has brought to the game of tennis.

However, with her career on the line, Williams has continued to provide inspiration. She champions inclusiveness, diversity and has proven a Black woman can thrive in a white man’s game.

Between Venus and Serena Williams, the sisters have won 30 major championships. However, that is simply the start of what they have done. The Williams sisters have broken barriers and created pathways for people whose roads were blocked for various deplorable reasons throughout history.

Nearly 3 million people watched on ESPN Monday night when Serena Williams won her first-round match. Imagine that, an almost 41-year-old Black woman shattering tennis records for viewership. That is how compelling and fascinating this US Open with Serena Williams getting ready to evolve out of tennis has become.

She is must-see TV. If the tennis audience can be considered niche, Serena Williams has once again turned the sport into a mainstream event. Try and turn away from her matches in this tournament? Good luck to that. Serena Williams’ play has been riveting. You turn the match on at the start and don’t leave until the GOAT exits the court.

The celebration Monday was fitting, and properly staged because tournament officials had no way to know if Williams would advance. The audience was dripping with celebrities; Mike Tyson was seated next to Martina Navratilova, President Bill Clinton chatted with Dr. Ruth.

The second round on Wednesday saw Tiger Woods in Williams’ player box. Have to wonder if the golf great was taking notes on how to exit a sport with such passion and grace. Serena Williams’ continues to set examples and standards for people of all ages, races and creeds to follow.

It was a privilege to watch greatness. Congrats @serenawilliams

Not done yet @serenawilliams 🙏🏽

Serena Williams has been brilliant on the tennis court for decades. This final chapter – if it is that – is another example of how a champion can handle their final moments. She’s aced the US Open with grace and dignity.