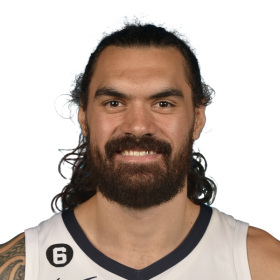 • "My Life, My Fight" (autobiography)

To develop well rounded successful young adults by promoting the philosophy of the student athlete and Promote education and health as vital to success through sport.

Steven Adams holds his free basketball camps in his native New Zealand. The big Kiwi recognizes how important his role is his own country as he’s the main NBA star the children of New Zealand have as their connection to loving basketball and the NBA.

Steven Adams has played giant Santa by delivering a warming Christmas gift to kids in need. Adams and his teammates have given back to the community ahead of Christmas. The entire Thunder team took children in need on a shopping spree to United States department store Target, and footed the bill. Teaming up for the 11th annual Target Shopping Spree, Adams and company were taking part in the 'Grandparents Raising Grandchildren' programme.

He was born to a Tongan mother and an English father. His father, Sid Adams, served in the Royal Navy and later settled in New Zealand where he fathered 18 children with five women. Sid Adams stood 6 ft 11 in (2.11 m) tall, and his children inherited his height: Steven Adams' brothers average 2.06...

He was born to a Tongan mother and an English father. His father, Sid Adams, served in the Royal Navy and later settled in New Zealand where he fath...

He was born to a Tongan mother and an English father. His father, Sid Adams, served in the Royal Navy and later settled in New Zealand where he fathered 18 children with five women. Sid Adams stood 6 ft 11 in (2.11 m) tall, and his children inherited his height: Steven Adams' brothers average 2.06 m (6 ft 9 in) tall, while his sisters average 1.83 m (6 ft 0 in). His half-sister, Valerie Adams, is a dual Olympic gold medalist and four-time world champion shot-putter, while his brothers, Warren and Sid Jr., had careers in the New Zealand National Basketball League.

After the death of his father, his brother Warren rescued him from the streets of Rotorua and brought him to Wellington. Warren began to take responsibility for Adams and introduced him to Wellington basketball legend Kenny McFadden. McFadden accepted Adams into his basketball academy, and Warren enrolled him in Scots College. The only rule McFadden had for Adams was that he had to attend school every day if he wanted to play basketball. While there was pressure for Adams to turn professional straight out of high school because it was believed he would never be able to qualify for the NCAA, Adams did well at Scots College and passed through the NCAA Clearinghouse after graduating from Scots in December 2011.

In 2011, Adams played for the Wellington Saints of the National Basketball League. He went unpaid by the Saints in order to keep his college eligibility. He was named the NBL Rookie of the Year and helped the Saints win the championship. In 15 games for the Saints, he averaged 5.5 points and 4.1 rebounds per game.

After graduating from Scots College in December 2011, Adams enrolled at Notre Dame Preparatory School, a well-known basketball prep school in Fitchburg, Massachusetts, for one semester. It was arranged only so he could acclimate himself to American basketball before enrolling at Pittsburgh in June 2012.

In his lone season at Pittsburgh, Adams was named the Big East Preseason Rookie of the Year and earned Big East All-Rookie Team honours. He started all 32 games during the 2012–13 season and averaged 7.2 points, 6.3 rebounds and 2.0 blocks per game. On April 2, 2013, Adams declared for the NBA draft, forgoing his final three years of college eligibility.

On June 27, 2013, Adams was selected with the 12th overall pick in the 2013 NBA draft by the Oklahoma City Thunder, becoming the first New Zealander to be selected in the first round of an NBA draft. He also became the first player out of Pittsburgh to be selected in the first round since 1999 when Vonteego Cummings was selected by the Indiana Pacers with the 26th overall pick. On July 12, 2013, he signed his rookie scale contract with the Thunder. In his NBA debut on October 30, 2013, Adams recorded two points, three rebounds, one assist and three fouls in 18½ minutes off the bench against the Utah Jazz. On November 8, in just his fifth NBA game, Adams recorded 17 points and 10 rebounds in a 119–110 win over the Detroit Pistons. He failed to surpass either mark for the rest of the regular season. He appeared in 81 games (20 starts) and averaged 3.3 points, 4.1 rebounds (9th among NBA rookies) and 0.70 blocks (9th among NBA Rookies) in 14.8 minutes. In Game 6 of the Thunder's second round playoff series against the Los Angeles Clippers, Adams recorded 10 points and a season-high 11 rebounds. The Thunder reached the Western Conference Finals, where they were defeated by the San Antonio Spurs in six games. At the conclusion of the 2013–14 season, Adams earned NBA All-Rookie Second Team honours.

On January 10, 2016, Adams tied his career high of 17 points in a 115–110 loss to the Portland Trail Blazers. On April 12, 2016, in the Thunder's regular-season finale, Adams had another 17-point performance in a 102–98 loss to the San Antonio Spurs. In Game 2 of the Thunder's second round playoff series against the Spurs, Adams recorded 12 points and 17 rebounds. In Game 4, he scored 16 points. Adams helped the Thunder advance to the Western Conference Finals for the second time in three years, where in Game 1 against the Golden State Warriors, he recorded 16 points and 12 rebounds. Despite going up 3–1 in the series, the Thunder were defeated in seven games by the Warriors. 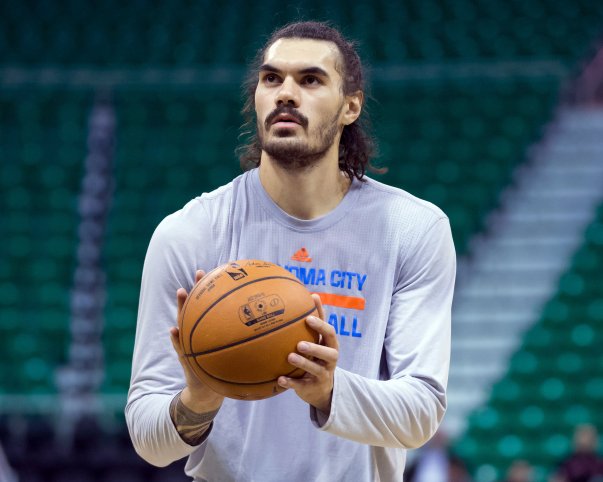 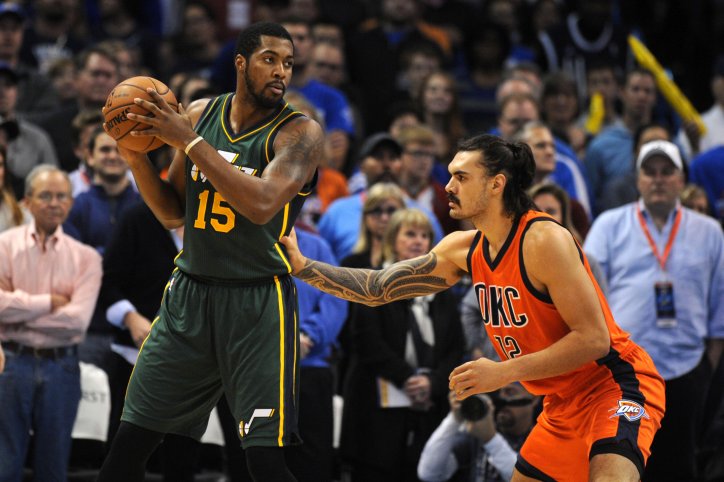 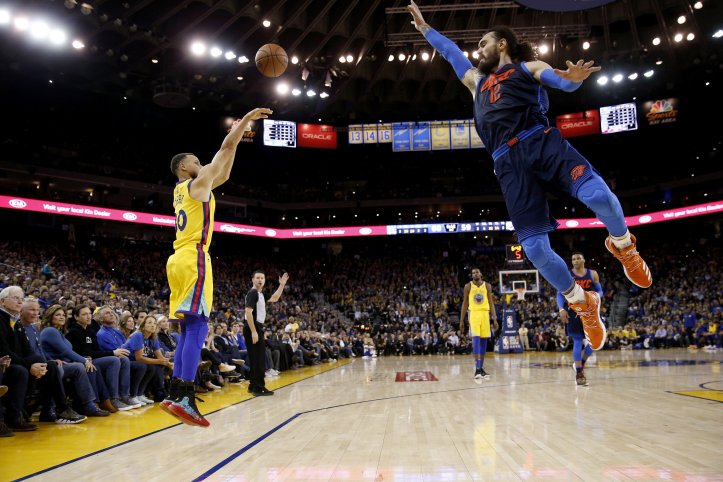 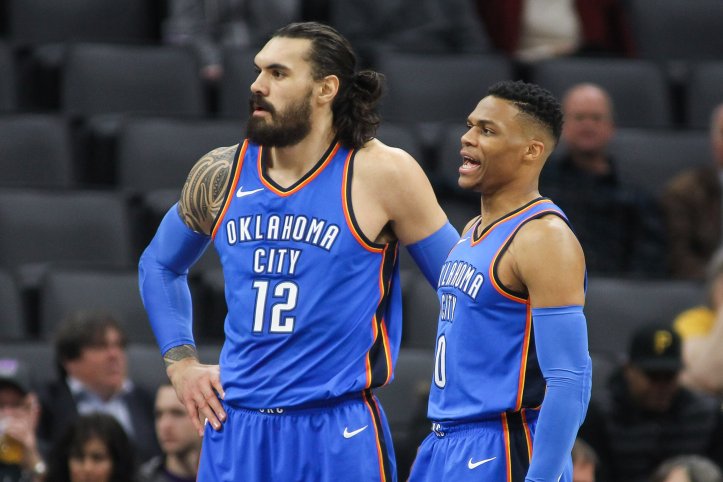 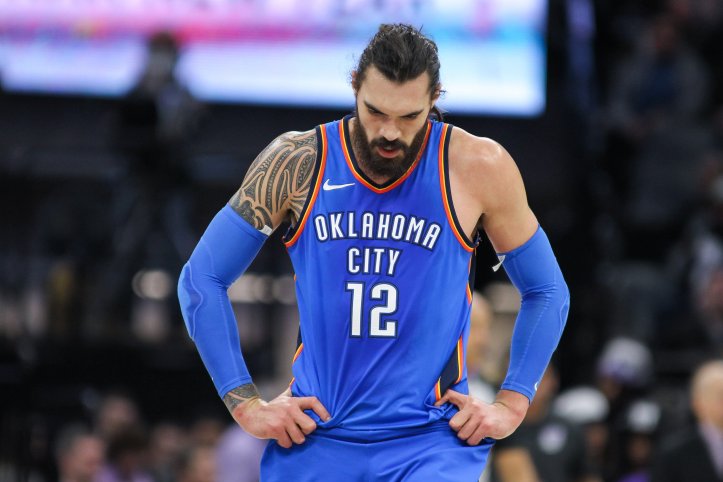 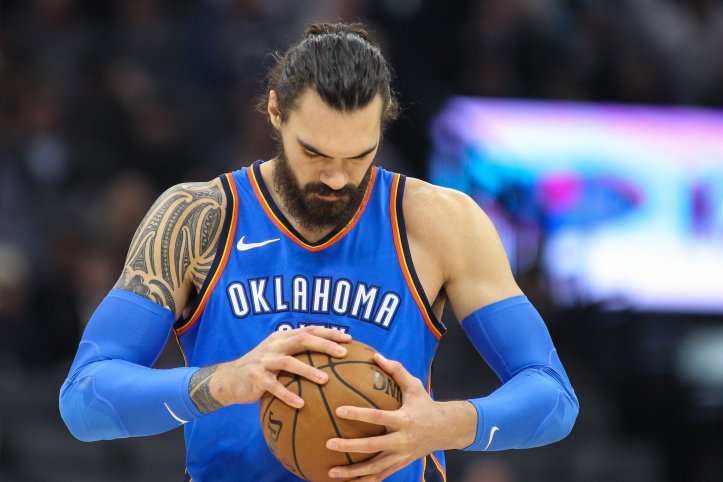 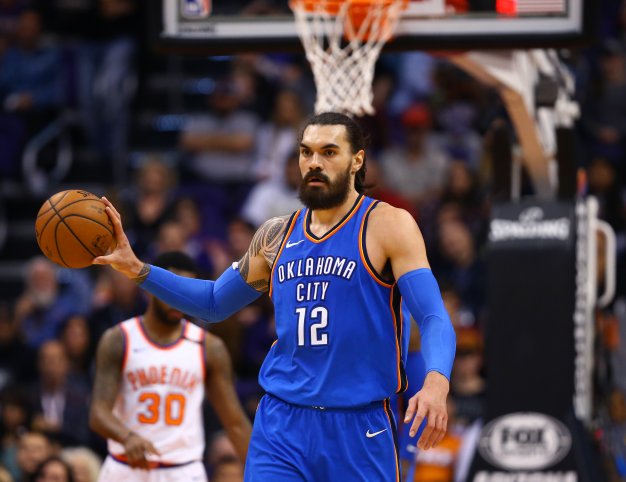 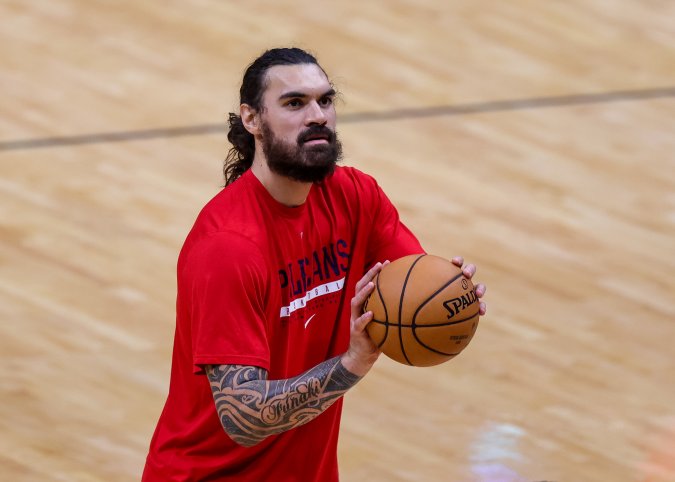 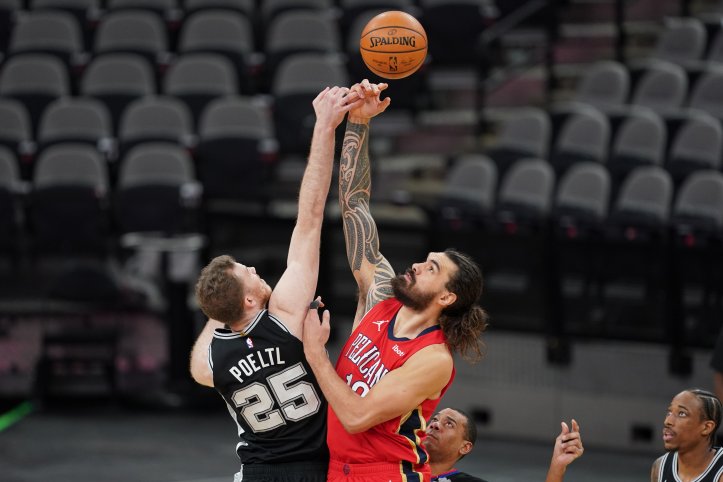 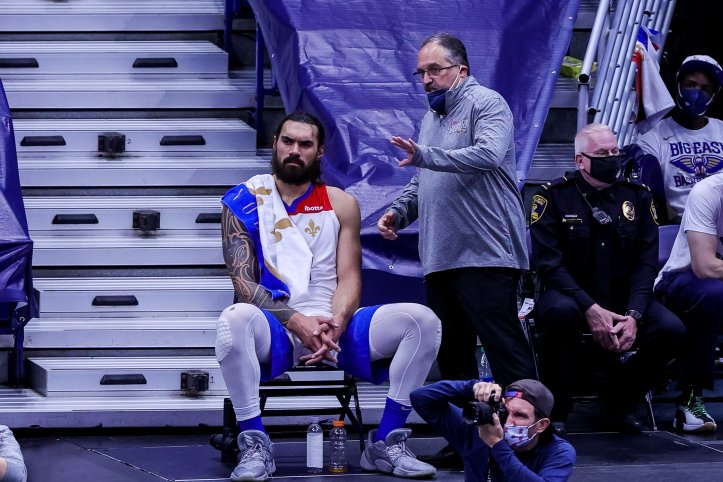 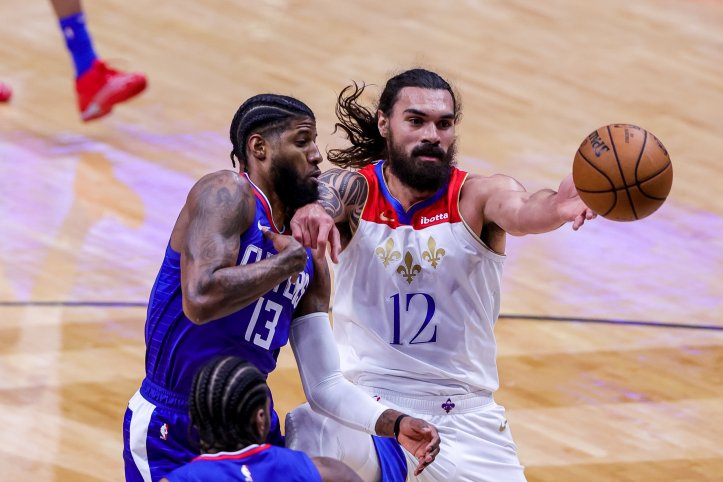 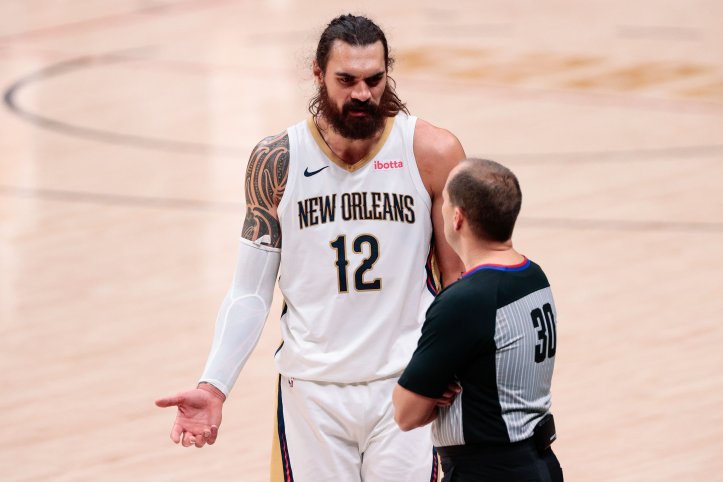 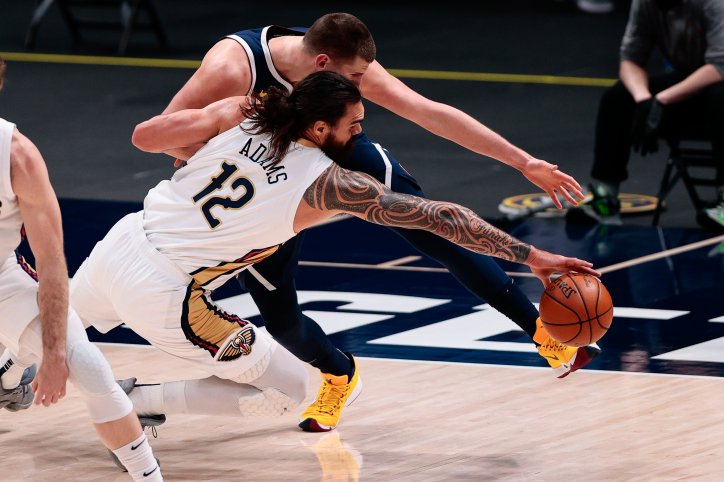 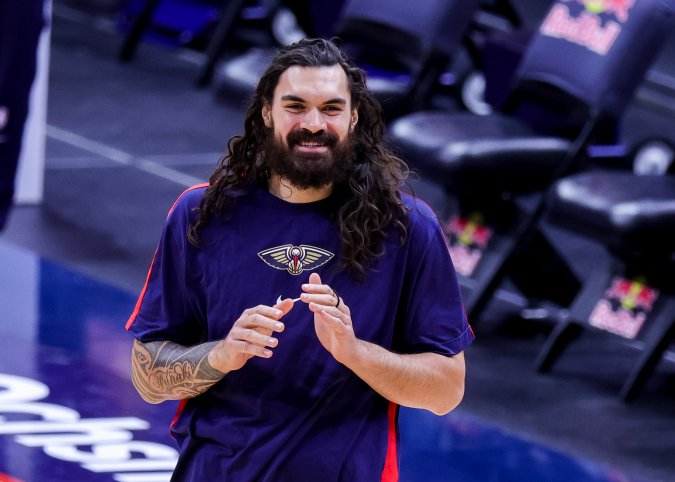 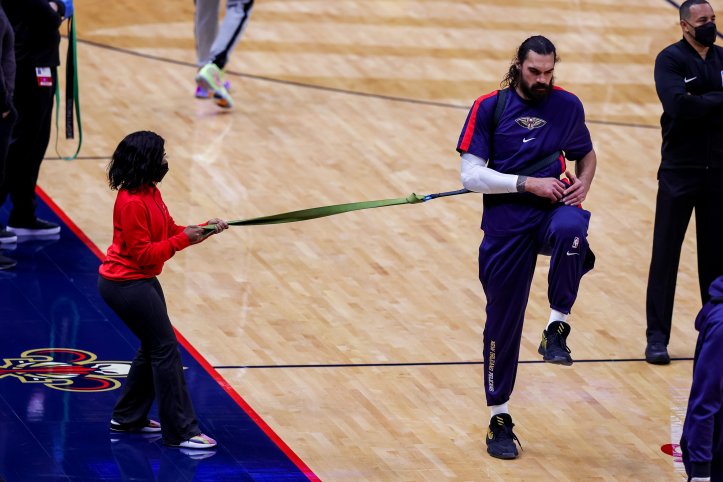