Page: Who is the NBA’s GOAT?

Who is the NBA’s GOAT? 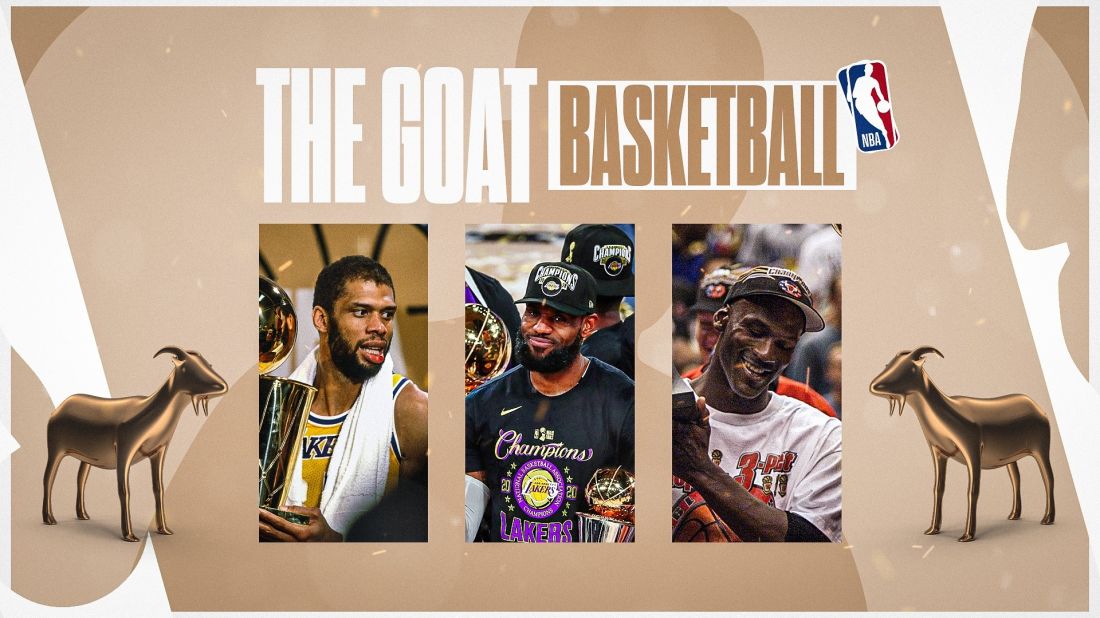 Greatest-of-all-time (GOAT) is being talked about by sports fans more than ever. People love to talk about all-time greats and compare them. In some sports, football, for example, there is no longer much of a debate about the GOAT. In other sports, like basketball, the debate will go on for as long as time.

If you have given any thought to who is the greatest player to play a sport then you are well aware that it is hard to compare players from different eras. Spots change and evolve over time and so do athletes.

The Game has Changed

The NBA was founded in 1946 and the game of basketball was played differently from the game that fans love today. It took over 20 years for the NBA to implement the 3-point line and back then it was uncommon for players to dunk.

The NBA in 2022 is all about high-flying dunks and 3=point shots – from all five positions. It wasn’t long ago that players could still make the NBA as specialists (sharpshooter, defense, rebounding). Now, every player on the court has to be able to do everything well or they won’t make a team.

It’s hard to look at the stats and say someone who played 50 years earlier is better or worse than a current player. Not only has the game changed so much, but many stats were not even recorded early on in the NBA.

All the flaws of trying to compare players of different time periods make the debate a lot of fun. We can never truly know who the greatest basketball player is, but we can pick our own and gather information to back our opinion.

Below is my list of the top-seven basketball players of all time. In a way, they are all GOATs of the sport but one player has to land at No. 1. I may be a little biased because I am also a kid from around Akron, Ohio, and grew up watching No. 1 play in high school. Similar, to ESPN’s Stephen A. Smith, but on the opposite side of the argument, there is nothing anyone can say to change my mind at this point.

Wilt Chamberlain, Hakeem Olajuwon, Larry Bird, and Steph Curry. Chamberlain is the most dominant player ever, averaging  50.4 points and 25.7 rebounds in the 61-62 season. Hakeem "The Dream" Olajuwon is one of the greatest defensive players in NBA history. Bird is one of the greatest pure-shooters and one of only three players (Chamberlain and Russell) to ever win three straight MVP awards. Curry just advanced to his sixth finals appearance, and he is undoubtedly the best shooter the NBA has ever seen.

Most All-NBA Teams in NBA history

Tim Duncan is the best to play the power forward position/ Duncan's demeanor rarely changed and he was the definition of consistent throughout his NBA career. If you look at his year-to-year numbers, you will see how steady Duncan was – he was great from year one when he won Rookie of the Year. Later on in his career, Duncan earned the nickname “Mr. Fundamental” because of how well he did all the little things in a game. Duncan was known for being efficient, but his defensive skills are what truly made him a remarkable player. To this day, he is ranked third all-time in NBA defensive efficiency. The unquestioned leader of one of the best dynasties in the modern NBA.

Just behind Chamberlain is Shaq, the second most dominant big man in NBA history. Nicknamed “Diesel” because he was as big and strong as a work truck. It was borderline unfair how he was able to brutalize defenders with brute strength or finesse them with great footwork. O’Neil had the incredible athletic ability to match his massive size which made him unstoppable. He is one of only three players to win NBA MVP, All-Star Game MVP, and Finals MVP awards in the same year (2000). Winner of three-straight Finals MVP awards with the great Kobe Bryant on his team is why he edged out his longtime teammate on this list.

21 years ago today, the Lakers completed their 3rd straight sweep by giving the Spurs a 29-point beatdown (2 days after beating them by 39). They ended up with a 15-1 record in the 2001 playoffs. pic.twitter.com/rlaRlJIgNH

Earvin "Magic" Johnson Jr. is still the only player to win an NBA Finals Most Valuable Player Award award as a rookie. At 6-foot-9, he could play all five positions but he had some of the best handles and court vision the NBA had ever seen. Many analysts consider Magic the best point guard to ever play. Magic redefined what a point guard could be and was widely considered the GOAT after he retired. He still owns the record for the highest career assists-per-game average (11.2) and most career assist in the playoffs (2,346). The magnificent battles between Magic and Bird helped the NBA transform into the spectacle that it is today.

Bill Russell is the greatest champion that the NBA has seen, winning the championship eight consecutive years and a total of 11 times in his 13-year career. Russell never averaged more than 19 points in a season but is remembered for his defense and rebounding. His biggest assignment came most years in the Finals when his Celtics would take on Chamberlain’s Lakers. Russell’s stellar defense on Chamberlain is the main reason the Celtics won most of those series over the Lakers. Russell and the Celtics are the reason that Chamberlain is not the unarguable GOAT of the NBA.

*These are the three best players to ever touch a basketball

*Each of them has an argument to be the GOAT

If this was an article choosing the GOAT of basketball and not the NBA then Abdul-Jabbar would easily take the No. 1 spot. Ferdinand Lewis Alcindor Jr. (later he chaged his name to Kareem Abdul-Jabbar) attended high school in New York where he went on to win three state titles and finished with a record of 79–2. At UCLA he was named college basketball’s player of the year three times and won three more championships. In the NBA he won six titles (one with the Bucks and five with the Lakers) and six MVP trophies. Kareem was one of the best pure scorers the game has ever seen and he still owns the record for most points in a career. His trademark skyhook made him nearly unguardable once he had the ball on the block. His game had no weaknesses as he was selected All-Defense team 11-times and led the league in rebounds twice and blocks four-times.

No one has had more of an impact on the NBA than No. 23 of the Chicago Bulls. Michael Jordan became bigger than basketball after his second three-peat in the 90s. With five regular-season MVPs (only Abdul-Jabbar has won more, with six), six Finals MVPs (NBA record), and three NBA All-Star Game MVPs, Jordan is the most decorated player in NBA history. That's without even mentioning his NBA record – 10 Scoring Titles. At 6’6” Jordan was the perfect build to dominate the two-guard position. He could jump out of the building and had a silky smooth mid-range jumper, making it nearly impossible for defenders to slow him down. MJ had a killer mindset that set him apart and he is considered one of the greatest competitors of all time across all sports.

Deemed the “Chosen One” in high school, LeBron Jameswas the most hyped player to enter the league and he blew past the sky-high expectations that the sports-world put on him. Since entering the league “The King” has impressed his peers and fans with his knack for always making the right basketball play. James dominated the league when he was young, in his prime and now he’s doing it still dominating in his 19th year (he averaged 30.3 points per game in 2021-2022). King James holds numerous "youngest to" distinctions and is starting to rack up “oldest to” records as well. He has had the longevity of Abdul-Jabbar, the playmaking ability of Magic, and can score and defend with the best of them.

James not only is one of the most gifted athletes to play any sport but he was blessed with one of the greatest basketball minds the game has ever seen. Making the playoff 15 times and getting to the finals 10 times has allowed James to put his name near the top of nearly every career playoff stat. He's the only player ever to record over 34,000 points, 9,000 assists, and 9,000 rebounds, and now he has over 36,000, 10,000, and 10,000. This debate ended for me when LeBron lead the Cavaliers back from a 3-1 deficit against the 73-win Warriors in the 2016 NBA Finals – scoring 41 points in both Games 5 and 6 and having a triple-double in Game 7.

If I had to choose any player to start a team with it is young LeBron because of his ability to make everyone around him better and his all-around ability to dominate games by making the right play.

Having the better legacy doesn't mean you are the GOAT.

MJ has the better legacy in terms of being 6-0 in the finals.

Kareem has the better legacy in terms of his entire basketball career; high school, NCAA, NBA.

LeBron's legacy is being the greatest player in NBA history. pic.twitter.com/I2hVfe4hxn