By Patrick Djordjevic | Posted 7 months ago 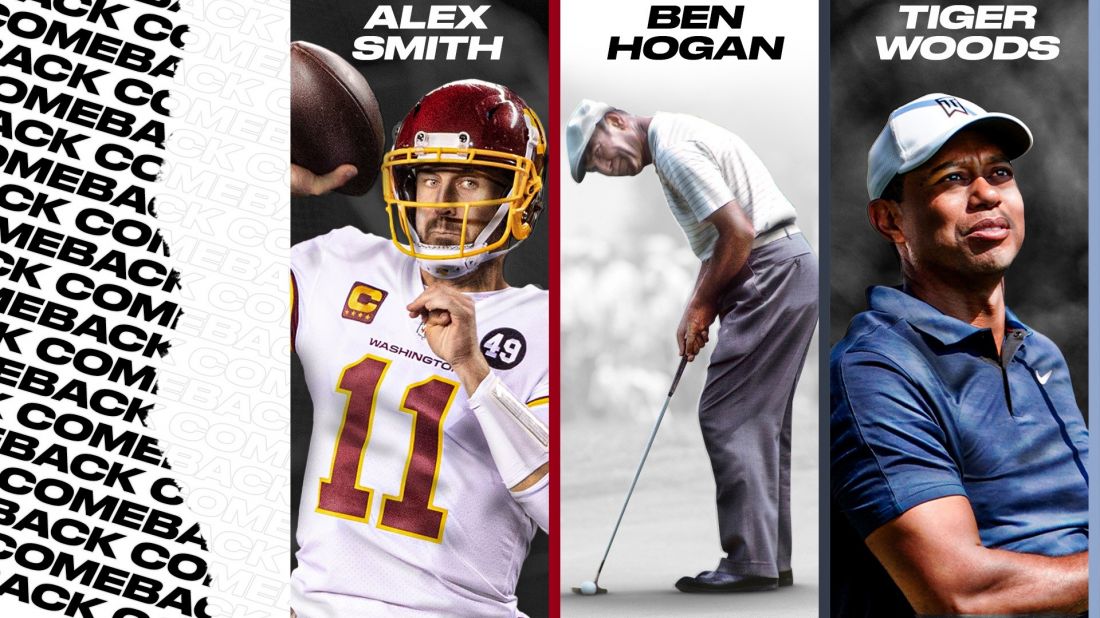 In 18 holes. Time and time again. Tiger Woods has conquered courses and rivals for decades. Yet his current assault on Augusta would be perhaps his most symbolic. From the jaws of life to rebirth, Tiger’s rise from the ashes could be complete, should he compete in this year’s Masters.

February 23, 2021: the date with which Tiger Woods’ golfing obituary was to be marked. Except, no one told the man himself. After Tiger’s Genesis SUV thunderously met its end, Woods was left rattled and fractured. Physically, yes – emergency surgery was required to repair his tibia, foot and ankle. But can Woods be mentally defeated? After another harrowing moment in the life of Tiger, he has resurrected and this time, there are more advocates than ever.

One trip around Augusta on the Tuesday before last, signaled – to himself and the world – Woods is reborn. Nine days on and Tiger is ready to compete, to win and shatter another record. Irrespective of the scorecard, Woods won’t be denied. Controversy, surgeries and car accidents have tried but failed to extinguish the competitive beast inside the 46-year-old. If he were to accrue his sixth green jackets – equalling Jack Nicklaus – Tiger will have added another, unrivaled, chapter to his story.

Woods isn’t the first athlete to catapult from retirement, deterioration or governmental interference to the aiguille of sporting excellence. Here are some comebacks that rival Woods, and – dare we say – the renaissance of Ricky Bobby.

It’s fitting that one of the greatest to grace the green had a comeback to match the sublime skill he displayed for decades. After a lean start to his professional career, which began in 1930, Hogan established himself as a supreme talent, winning three majors before colliding head-on with a Greyhound bus in February of 1949.

Aged just 36, Hogan left his wrecked Cadillac with a double-fractured pelvis, fractured collarbone, left ankle, along with a chipped rib and most dangerously, severe blood clots. They almost killed him, let alone his golf career. Walking with any great conviction was a long shot. Though not for the man who had stared down, and defeated opponents, self-doubt and impoverishment.

Nine months after the accident, Hogan returned to the fairways. Less than a year on, Hogan won the U.S. Open for the second time. He wasn’t done there, winning another five majors alongside five PGA Tour wins, before retiring in 1971. Long after his passing, Hogan remains one of the greats of golf and is one of only five men to have won all four majors.

In one play, Alex Smith’s NFL life flashed before his eyes. Little did he know his existence outside of football was equally under threat. As he writhed in agony on the FedEx Field turf, he must’ve known his world would never be the same.

To that point Smith had led Washington to a 6-3 record during his first season in the capital, after making way for Patrick Mahomes in Kansas City. Everything seemed so promising, that is until Smith’s leg broke, sickeningly bending at 90 degrees.

A stretcher and surgeries – 17 to be precise –  followed, so too life-threatening complications. For nine months Smith was in and out of hospital fighting against flesh-eating bacteria and the real possibility of amputation.

Neither lasted, and Smith’s willpower won out. Almost two years on from the injury, the former Ute replaced Kyle Allen in Week 5 of 2020, on the same field where his NFL dreams went to die.

Smith may have failed to overcome the Rams that day, but he was never going to walk off defeated. The NFL world recognized Smith’s resilience with The Associated Press, Sporting News and Pro Football Writers Associated voting him as 2020’s Comeback Player of the Year.

There was a time where Manning was discarded, unwanted, and in that moment, unbefitting of an NFL franchise. Ironically it was the franchise that had nurtured him for 13 years prior. Following three neck surgeries and a total absence during the 2011 season, the Indianapolis Colts felt Manning had lost his touch, cutting him at the end of the season in favor of drafting Stanford's Andrew Luck first overall. After his release from the Colts, The Sheriff settled in The Rockies, proving the true successor to John Elway.

While the first three seasons proved false dawns for the Broncos, Manning displayed the brilliance that made him a legend in Indy. In 48 games, Manning threw for 131 touchdowns – including 55 during 2014 as the Broncos fell to Seattle in Super Bowl XLVIII.

In his fourth – and final season – Manning fought through injury and inconsistency. In large thanks to a dominant defense and a freakish Von Miller, Denver defeated Carolina 24-10 in Super Bowl 50, ensuring Peyton’s place as an immortal in Mile High.

His Airness didn’t need to return, but it’s never been in his nature to embrace contentment. After losing his father and passion for basketball, Jordan made the move toward the NBA Hall of Fame, retiring in October 1993.

After a 13-month sabbatical, on March 18, 1995, Jordan decided to return to the hardwood, releasing the now-famous two-word press release; “I’m back.”  MJ officially returned the next day, scoring 19 points. What followed was a cementation of Jordan’s place at the pinnacle of sporting iconography.

The 1995 season – Jordan’s first full-season since returning – created history, with Chicago setting the then-best regular-season record (72-10). Jordan won the regular season MVP before adding his fourth championship in a 4-2 Finals victory over Seattle. Jordan and the Bulls added another two Larry O’Brien Trophies in the succeeding seasons, completing their second three-peat in the space of eight years.

The charismatic king of boxing is widely regarded as the greatest to grace the squared circle. Though it’s feasible to suggest he’s held in higher regard for his efforts outside the ring. Ali became a gold medal winner and World Heavyweight Champion by the age of 22. All before undertaking the biggest stand of his career; evading conscription for the Vietnam War.

Ali was exiled from the boxing world, stripped of his title and received a seemingly perpetual barrage of death threats and abuse. The Greatest was stripped of his boxing license in every state and resultantly didn’t fight from March 1967 to October 1970.

His return lasted a decade, reclaiming, losing, and finally winning back the world title before retirement. Ali’s post-exile fights still live long in the memory, with ‘Fight of the Century,’ ‘Thrilla in Manila’ and ‘Rumble in the Jungle’ at the forefront of boxing lore.

The most decorated Olympian in history, and for some time too. Perhaps that’s why Phelps decided to retire in the aftermath of a six-medal performance at the 2012 London Games. What more was there to accomplish? At that moment, nothing. Fast-forward four years, nothing and yet everything had changed.

Phelps was back doing what he loved, swimming and winning. The Baltimore native bore the flag in the opening ceremony and on the winner’s podium, collecting five gold medals from six events. One of the primary reasons for Phelps’ return was to avenge his 200m Butterfly loss in London. Of course, he achieved the ultimate redemption in Rio.

After winning his record-setting 23rd gold medal in 2016, Phelps retired once more, this time for good. Assuring his place in a pantheon-for-one as the greatest Olympic athlete of all-time.

It’s said an athlete’s greatest ability is availability. Few can achieve greatness without it. Then, there’s Super Mario. Le Magnifique, as he was otherwise known, never played a full season in the NHL despite seemingly never-ending successes, including three Hart Memorial Trophies and two Stanley Cups.

Despite his incredible career, the ‘94 was arguably Lemieux’s greatest. On course to threaten Wayne Gretzky’s record 92-goal season, Pittsburgh’s No. 66 suffered a crushing blow; diagnosed with Hodgkin's Lymphoma in January, 1993. Lemieux missed two months before returning with a vengeance, helping secure the Penguins’ highest points tally of 119.

Astonishingly, Lemieux won his fourth scoring title despite playing 12 games less than his nearest rival. While Pittsburgh crashed out in the playoffs, The Magnificent One clinched another Hart Memorial Trophy in one of the most triumphant returns to the ice.

The Australian tennis star retired for a second time in recent weeks in what came as a shock to many across the sporting landscape. It isn’t the first time Barty has put down the racquet, after leaving the sport at 18 to play cricket for Australian domestic side, Brisbane Heat.

Before leaving tennis, Barty won the Wimbledon girls’ singles title and made three WTA doubles finals as a teenager. Almost two years on, Barty returned to professional tennis, winning her first WTA title in 2017. Despite finishing the ‘17 & ‘18 seasons inside the top 20, 2019 proved to be Barty’s breakout season.

At the age of just 23 she won the French Open singles title, before finishing the year world no. 1. Barty finished the succeeding two seasons in the same position No.1, adding another major, this time the Wimbledon in 2021.

Months before announcing her retirement, the Australian won her home grand slam, placing her alongside other three-time Grand Slam champions, including Jennifer Capriati and Lindsay Davenport.

The nine-time Grand Slam champion had an incredible start to her career, becoming the youngest  French Open Champion at 16. For half-a-decade the tennis world kneeled at the feet of the Yugoslav-American as she amassed eight grand slams and three-consecutive Australian and French Open titles.

On April 30,1993, Seles turned her back. Not on tennis, but to the crowd as she sat down for a change of ends. As common as waking up in the morning. Moments later, Seles was stabbed between the shoulder blades by Günter Parche, a crazed Steffi Graf fan –  who Seles had beaten in three of the last four slams.

Seles wasn’t seen on court for two years suffering from depression and an eating disorder. Though that wasn’t the end of her story. The left-hander returned in August 1995, shortly after losing the US Open final to Graf. Seles’ last triumph came at the following slam, winning in Melbourne for the fourth time, and claiming her ninth overall slam.

Think Mick Fanning, but less fortunate. In 2003, aged 13, Hamilton was immersed in the Kaui waters, in her happy place. Surrounded by friends, barrels, and unbeknownst to her, a Tiger shark with an appetite.

Hamilton’s left arm was dangling in the water, as she lay prone on her surfboard. Like a red rag to a bull, it was summarily bitten off. Arriving at Wilcox Memorial Hospital with the help of those in the water, Hamilton arrived with 60% blood lost.

Just 26 days after the attack, Hamilton was back on a board competing in a major tournament. Since 2008, she has regularly competed on the World Surfing League Tour, winning numerous competitions including the 2014 Pipeline Women’s Pro.