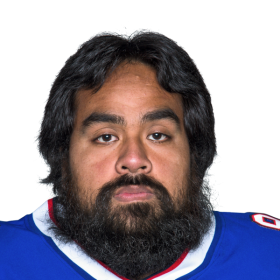 Star Lotulelei was born December 20, 1989, in Tonga. He is a defensive tackle for the Buffalo Bills In the NFL. In 2010, Lotulelei transferred to the University of Utah, and played in all 13 games for the Utah Utes football team, and became a starter for the final three games of the season. He totaled 21 tackles with 2.5 tackles for a loss, and also was credited for a half quarterback sack, which ...

Star Lotulelei was born December 20, 1989, in Tonga. He is a defensive tackle for the Buffalo Bills In the NFL. In 2010, Lotulelei transferred to the University of Utah, and played in all 13 games for the Utah Utes football team, and became a starter...

Star Lotulelei was born December 20, 1989, in Tonga. He is a defensive tackle for the Buffalo Bills In the NFL. In 2010, Lotulelei transferred to the University of Utah, and played in all 13 games for the Utah Utes football team, and became a starter for the final three games of the season. He totaled 21 tackles with 2.5 tackles for a loss, and also was credited for a half quarterback sack, which came against San Jose State in arguably his best game of the season (season-high five tackles). Lotulelei also made several appearances at offensive guard.

A regular starter in 2011, Lotulelei was an All-Pac-12 Conference performer and won the Morris Trophy as the league's best defensive lineman. He started all 13 games and registered 44 tackles, 1.5 sacks, one pass breakup, a forced fumble, and a fumble recovery. His 9.0 tackles for loss tied sophomore linebacker Trevor Reilly for second on the team. In a 14–31 loss against Washington, Lotulelei had six tackles including 2.5 tackles for a loss. A week later he had five tackles in a 14–35 loss against Arizona State. Against California, Lotulelei surprised with a 17-yard reception on a fake punt play. Utah finished the regular season 7–5 and played Georgia Tech in the 2011 Sun Bowl. Lotulelei made six tackles and recovered a fumble and was awarded the Jimmy Rogers, Jr. Trophy for the Most Valuable Lineman.

Lotulelei returned to the University of Utah for his senior year and started in all 12 games at nose tackle. He recorded 42 tackles including a team-high 11 tackles for loss and 5.0 sacks, while also having four pass breakups, four fumble recoveries, and three forced fumbles. A season-high seven tackles plus two pass breakup came early in the season in a 24–21 win against the school to which he had previously committed, Brigham Young. Lotulelei blocked a 51-yard field goal attempt with 1 second remaining following a third-down incompletion. Two weeks later, Lotulelei had a heralded performance against All-Pac-12 center Khaled Holmes of the USC Trojans in a 28–38 loss for the Utes.

Lotulelei was drafted in the first round, 14th overall by the Carolina Panthers, as the second defensive tackle selected after Sheldon Richardson. In his rookie year, Lotulelei started all 16 regular games for the Panthers, recording 42 tackles, three sacks, and 23 quarterback pressures. He finished second in the NFL in run-stop percentage among defensive tackles at 12.9%, was rated by Pro Football Focus as the 6th best defensive tackle against the run, and helped Carolina improve from 14th in the NFL in run defense in 2012 (110.1 yards per game) to second (86.9 yards per game) in 2013. Lotulelei picked up from his strong rookie performance in his debut against the Tampa Bay Buccaneers where he recorded 1 quarterback hit, 2 quarterback hurries, and 1 tackle. Through the first week of the season, Lotulelei ranked among the top 10 defensive tackles in the NFL in pass-rush productivity.

Lotulelei's 2015 preseason was cut short by a stress reaction in his surgically repaired right foot and it further caused him to miss the first 2 games of the NFL season during which the Panthers were able to produce victories over the Jacksonville Jaguars and Houston Texans. During the Panther's week 4 victory over the Tampa Bay Buccaneers, Lotulelei recorded a key fumble recovery that led to points that gave the Panthers the lead in the game. Against the Philadelphia Eagles, Lotulelei recorded 6 quarterback pressures. During the Panthers 37–29 victory over the Green Bay Packers that helped the Panthers move to 8–0 in the first time in franchise history, Lotulelei recorded his first sack of the season against quarterback Aaron Rodgers. Lotulelei had 22 tackles, 1 sack, 1 forced fumble, 1 fumble recovery, and 2 passes defended on the season. The Panthers finished with a franchise-best 15–1 record and went on to defeat the Seattle Seahawks and the Arizona Cardinals. On February 7, 2016, Lotulelei was part of the Panthers team that played in Super Bowl 50. In the game, the Panthers fell to the Denver Broncos by a score of 24–10. In the Super Bowl loss, he recorded five tackles. On April 26, 2016, the Panthers picked up the fifth-year option of Lotulelei's contract. On September 10, 2017, in the season-opening 23–3 victory over the San Francisco 49ers, Lotulelei's teammate Wes Horton sacked quarterback Brian Hoyer and forced a fumble. Lotulelei recovered the fumble and set the Panthers up for an eventual touchdown scoring drive. In the 2017 season, he started all 16 games and recorded 1.5 sacks, 25 total tackles, three tackles-for-loss, five quarterback hits, one pass defended, and one fumble recovery.

On March 13, 2018, Lotulelei agreed to a five-year deal worth $50 million with the Buffalo Bills. The deal was finalized the next day, on March 14. Lotulelei was used mostly as a run-stopping/0-tech tackle in his first season with the Bills. In 2019, he recorded his first sack with the team against the Miami Dolphins in week 11. Two weeks later against the Dallas Cowboys on Thanksgiving Day, Lotulelei recorded his first NFL interception, picking off a screen pass from Dak Prescott and then blocking a field goal in the same game.[50][51] In the 2019 playoffs, Lotulelei had a key play late in the 4th quarter of the Wild-card game against the Houston Texans, stuffing quarterback Deshaun Watson on a 4th-down quarterback sneak to give the Bills the ball back, after which they drove down the field for a game-tying field goal, but Buffalo lost in overtime 19–22. On July 28, 2020, Lotulelei announced he was opting out of the 2020 season due to the COVID-19 pandemic. 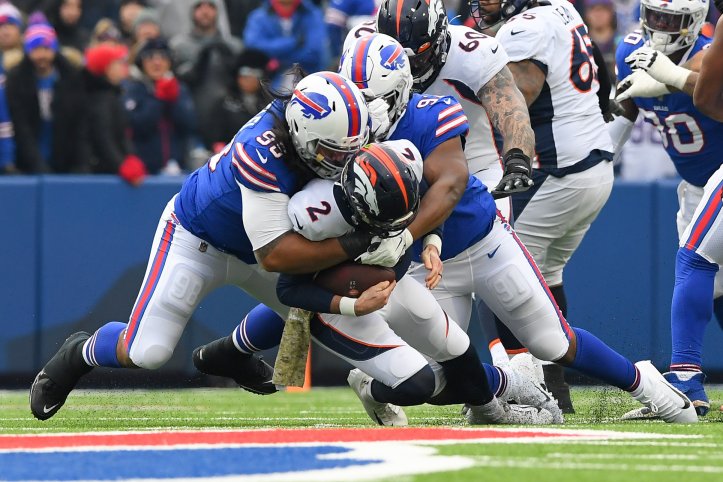 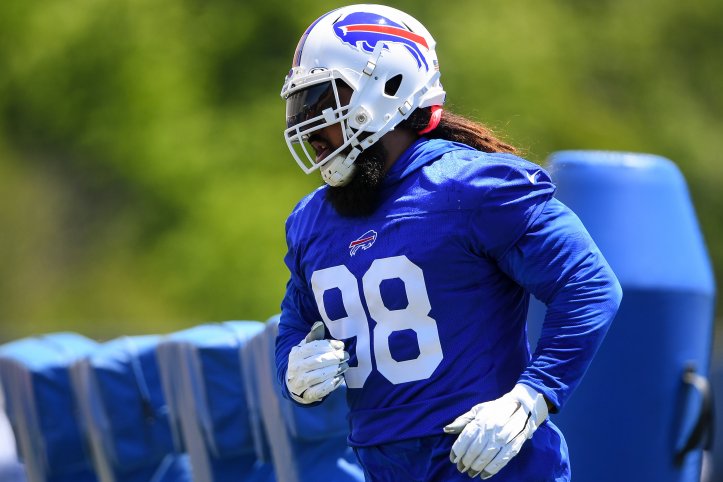 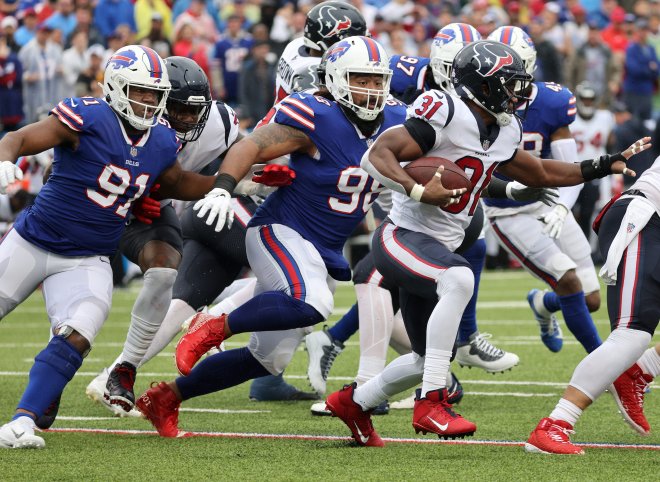 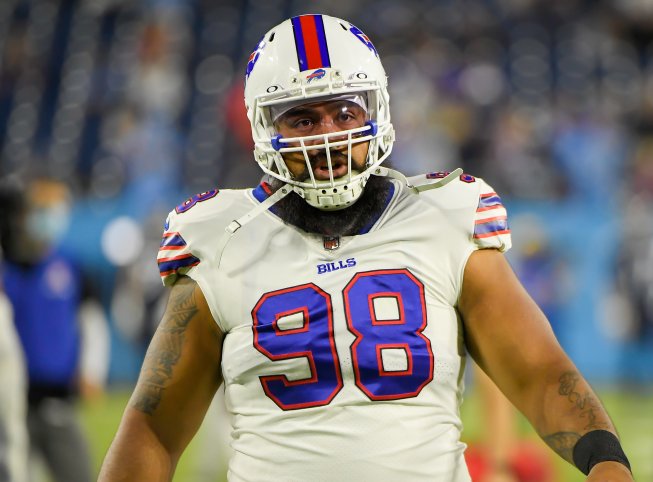