Led kids in fitness activities as part of NFL’s PLAY 60 campaign, helping kids get 60 minutes of exercise a day.

get involved
Involved in 15 charities

Participated in the 4th & Life program, a program for high school athletes focusing on what it takes to be successful on the field, in the classroom, and in the workplace.

Welcomed 1,100 children into the Redskins locker room at FedExField to meet Santa and take home toys for Christmas at Skins Santa Shoppe. In 2011, helped the Washington Redskins Charitable Foundation and the U.S. Marine Corps provide 1,100 youth in need with a toy at the annual Skins Santa Shoppe.

Brought smiles to hospital patients by dressing up in costume and visiting with children at the WRCF Pediatric Halloween Party,

In 2012, participated in the team’s 80th Anniversary Thank You Tour throughout Virginia, Maryland and Washington, D.C.

In 2014, raised money for after-school exercise and wellness programs with actor Matthew McConaughey and teammate Alfred Morris at the Movies with Morris event and raised money for pediatric cancer research at the Make-A-Wish Foundation Evening of Wishes Gala in 2014.

Met and congratulated children who won their Redskins Read Across Richmond summer challenge and brought 25 children from INOVA Children’s Hospital to the Redskins cafeteria to eat, play games and create their own Build–A-Bear in 2015.

Man of the Year in 2015 for his efforts in the community.

get involved
Ryan Kerrigan’s Blitz for the Better Foundation

In 2013, launched Ryan Kerrigan’s Blitz for the Better Foundation, which provides opportunities, support and resources to children and families in need in the Greater Washington, D.C. area. Served as a waiter with several teammates at Ruth’s Chris Steak House at the organization’s launch fundraiser, raising more $100,000 for seriously ill, special needs and physically challenged children in each of the last three years... Has dedicated multiple "Kerrigan's Korner" hubs at local children's hospitals to provide children who are battling various serious illnesses with an electronic center full of games and movies to keep their minds stimulated during recovery... In 2016, recorded a reading of “Oh the Places You’ll Go” by Dr. Seuss in celebration of the author’s birthday for Read Across America Day. Hosted Ryan Kerrigan’s Topgolf Challenge to promote his Blitz for the Better Foundation.

Walked the runway alongside the Women of Washington to raise money for the WRCF at the second annual Redskins Runway.

promoted healthy lifestyle habits at the 138th annual White House Easter Egg roll on the South Lawn, celebrated the unveiling of a new Kerrigan’s Korner, discussed the “Be the Change” campaign in an Emmy-winning educational film endorsed by the Fear 2 Freedom non-profit organization.

get involved
Leukemia and Lymphoma Society

Cure leukemia, lymphoma, Hodgkin's disease and myeloma, and improve the quality of life of patients and their families.

He grew up along with his brother, Kyle Kerrigan and sister, Kaitlin Kerrigan. His father played football at the Ball State University while his brother was part of the DePauw University’s swimming team. Ryan started playing football from a very young age and when he was in high school, he p...

He grew up along with his brother, Kyle Kerrigan and sister, Kaitlin Kerrigan. His father played football at the Ball State University while h...

He grew up along with his brother, Kyle Kerrigan and sister, Kaitlin Kerrigan. His father played football at the Ball State University while his brother was part of the DePauw University’s swimming team. Ryan started playing football from a very young age and when he was in high school, he played the position of the defensive end for his school team.

He attended Muncie Central High School situated in Muncie, Indiana. Upon graduation, Ryan enrolled at Purdue University where he played for the Purdue Boilermakers football team for four seasons ending in 2010. In his freshman year, he made 18 tackles and a sack in 12 games. The following year, he had seven sacks, an interception, and 56 tackles. During his junior year, he hauled 12 sacks and 66 tackles. In the same year, he was named to the All-Big 10 first team and was honored with Pit Bull Award for his tenacity and resilience.

In 2010, he won the Big Ten Defensive Player of the Year award as well as Big Ten Lineman of the Year. He also received the Bill Willis Trophy and was named unanimous first-team All-American. At the end of his college career, Kerrigan joined the list of prospects for the 2011 NFL draft.

The Washington Redskins selected Kerrigan in the first round (16th overall) of the 2011 NFL Draft. Kerrigan was the third edge rusher drafted. Kerrigan made his professional regular season and first career start in the Redskins' season-opener against the New York Giants and recorded five combined tackles, a pass deflection, and returned an interception for a touchdown in their 28–14 victory. Kerrigan intercepted a pass by quarterback Eli Manning and scored a 9 yard touchdown. Kerrigan's performance over his first four games earned him the Defensive Rookie of the Month for September.

On January 20, 2013, it was announced that Kerrigan was added to the 2013 Pro Bowl as a replacement for Aldon Smith who was set to appear in Super Bowl XLVII with the San Francisco 49ers. On September 19, 2014, Kerrigan recorded four solo tackles and had a career-high four sacks on quarterback Chad Henne during the Redskins' 41–10 victory against the Jacksonville Jaguars. Kerrigan was named the 78th best player by his peers on the NFL Top 100 Players of 2015. On December 20, 2016, he was named to the 2017 Pro Bowl roster, which was his second Pro Bowl nomination. By the end of the 2018 season, Kerrigan moved up to second overall on the Washington Redskins all-time sacks list at 84.5 sacks, surpassing former defensive end Charles Mann. 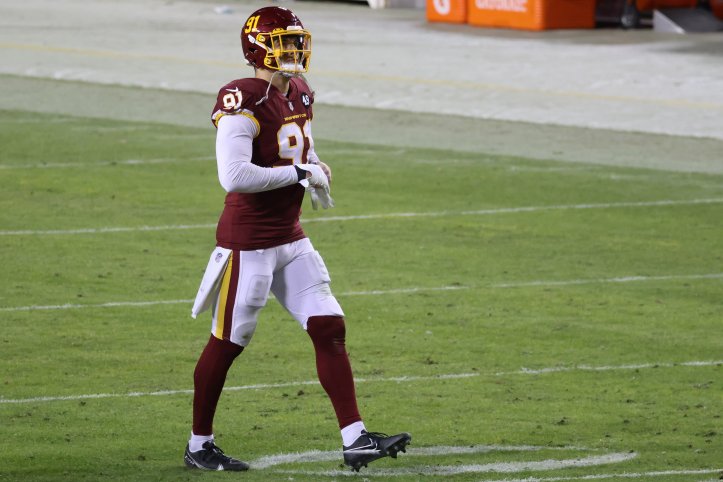 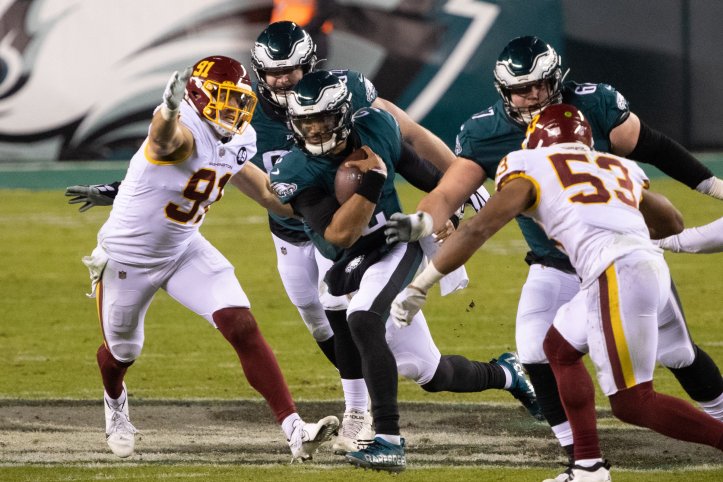 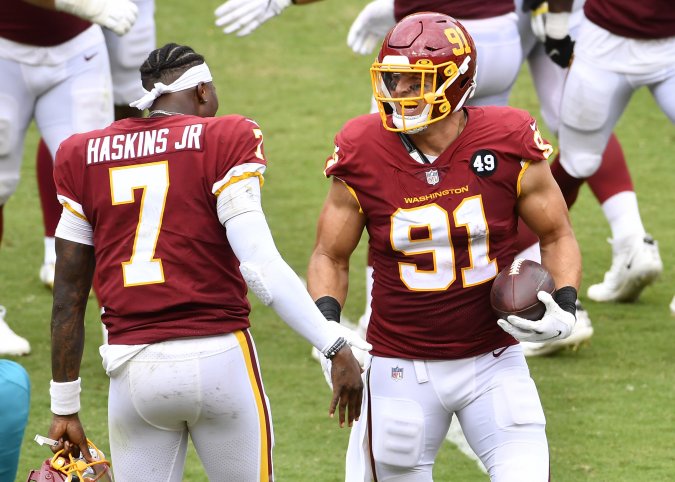 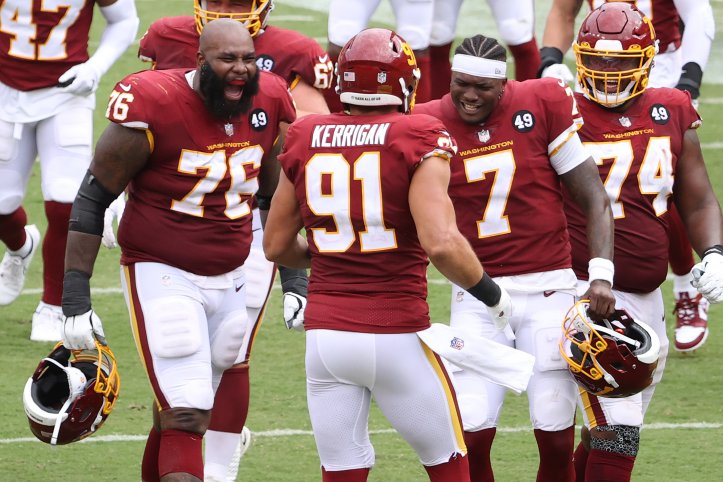 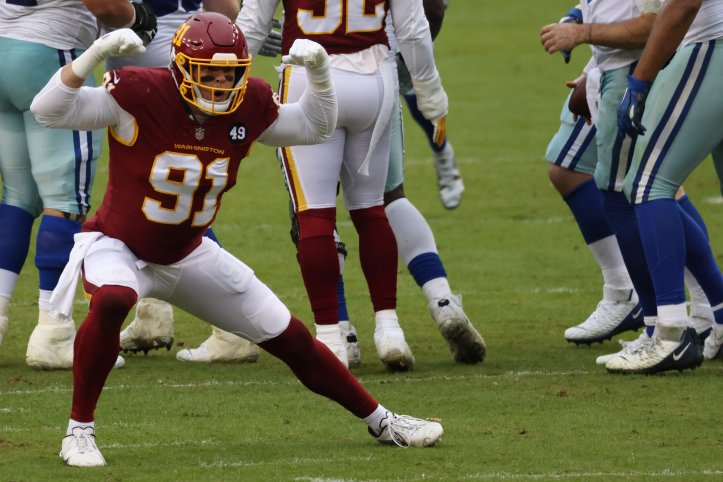 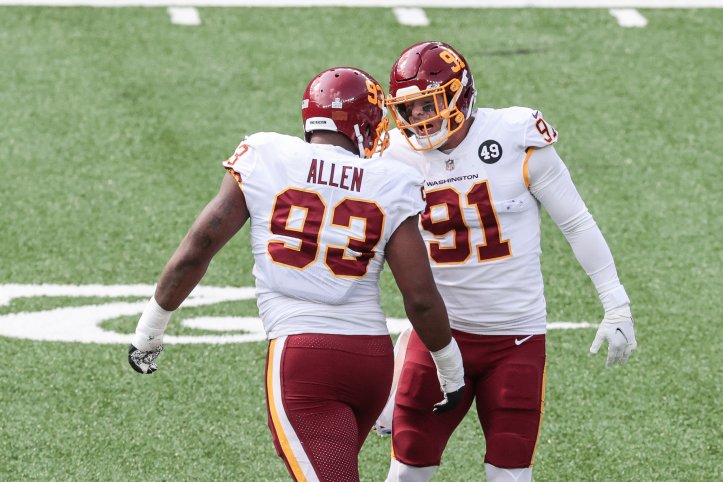 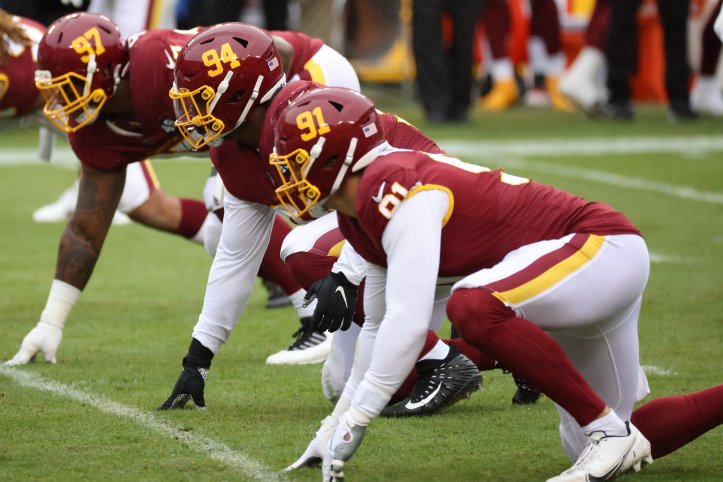 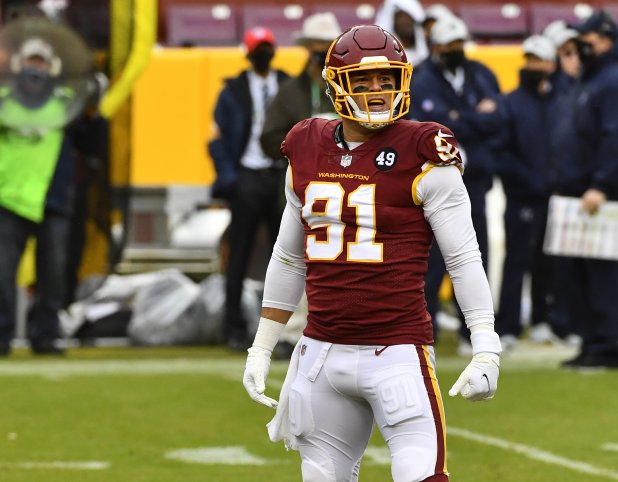