Our mission is to ensure that youth facing financial hardships in the communities we serve have the opportunity to excel both athletically and academically by providing the necessary resources, supplies and equipment.

He attended Fostoria High School where he lettered in three sports: baseball, basketball, and football. On the gridiron, he was a team captain during his sophomore, junior, and senior seasons with the team. As a junior, Hyde earned northern Ohio first-team honors as a quarterback, defensive back, a...

He attended Fostoria High School where he lettered in three sports: baseball, basketball, and football. On the gridiron, he was a team captain during...

He attended Fostoria High School where he lettered in three sports: baseball, basketball, and football. On the gridiron, he was a team captain during his sophomore, junior, and senior seasons with the team. As a junior, Hyde earned northern Ohio first-team honors as a quarterback, defensive back, and place kicker. He was also named honorable mention as a punter. He was additionally named a first-team defensive back and quarterback in his senior year. He also earned first-team all-conference basketball and baseball honors and averaged 22 points a game in basketball during his time there. During his career, he had 165 tackles, eight interceptions and seven defended passes as a cornerback. As a quarterback, he had 549 rushing attempts for 3,443 yards and 46 touchdowns and also completed 606 out of 997 passes for 7,864 yards and 65 touchdowns. Hyde broke 17 school records, including those for touchdown passes in a season and a career.

At Iowa, he was ranked as a two-star dual-threat quarterback by Rivals.com. He received his first collegiate playing time in a game against Northern Iowa and contributed one tackle on special teams. During his sophomore year, Hyde played a much more expanded role on defense and started all 13 games at cornerback. He made his first big impact in a game against the Ball State Cardinals, where he forced a fumble and intercepted a pass. Later in the season when the Hawkeyes played Michigan State, Hyde scored his first touchdown on a lateral from teammate Tyler Sash. He finished the season with a career-high in tackles with 82, 58 of them solo, with 4 interceptions, and his performance led to him being named as an honorable mention to the All-Big Ten team. After the successes of his second year, Hyde was rotated between free safety and cornerback during spring practice and started the first two games at safety. He was moved back to cornerback against Pittsburgh and had two interceptions. He finished the year with 72 tackles, where 1.5 were for loss, 3 interceptions, and a forced fumble, and he was named an honorable mention to the All-Big Ten team. In his final year with the Hawkeyes, Hyde was named a first-team All-Big Ten selection and also won the Tatum-Woodson Award, annually given to the best defensive back in the conference. He finished his career starting every game for three consecutive seasons. He finished his senior year with 78 tackles, 14 defended passes, an interception, three forced fumbles, and two fumble recoveries.

Hyde was projected to be a sixth-round pick by NFL draft experts and scouts and was ranked the 25th best cornerback prospect in the draft by DraftScout.com. The Green Bay Packers selected Hyde in the fifth round of the 2013 NFL Draft, and on May 10, 2013, the Green Bay Packers signed Hyde to a four-year contract. He made his professional regular season debut in the Green Bay Packers season-opener at the San Fransisco 49ers and recorded four combined tackles. Hyde recorded his first career tackle on wide receiver Anquan Boldin after a nine-yard reception in the first quarter. In Week 5, Hyde returned the first punt of his career for a two-yard gain before being tackled by Don Carey of the Detroit Lions. On October 27, 2013, his touchdown marked the first score of his career and occurred in the second quarter off a 53-yard punt by Jeff Locke of the Minnesota Vikings. On December 22, 2013, Hyde earned his first career start and recorded six combined tackles against the Pittsburgh Steelers. Hyde finished his rookie season with 55 combined tackles where 41 were solos, two pass deflections, and a sack in 16 games and three starts. As a returner, he finished the season with 22 kick returns for 531-yards and 24 punt returns for 296-yards and a touchdown.

Hyde started at strong safety in the 2015 season-opener and for four other games. On October 18, 2015, Hyde recorded a season-high nine combined tackles and a pass deflection against the San Diego Chargers. He finished the 2015 season with 55 combined tackles where 51 were solos, six pass deflections, three interceptions, and a sack in 15 games and seven starts. He also returned eight kicks for 187-yards and 27 punts for 157-yards. In 2016, head coach Mike McCarthy named Hyde the No. 1 Nickelback and backup strong safety, behind Morgan Burnett, to start the 2016 regular season. He finished the 2016 season with 58 combined tackles where 47 were solos, nine pass deflections, three interceptions, and a sack in 16 games and 11 starts. He received an overall grade of 73.9 from Pro Football Focus and ranked 53rd among qualified safeties. After the 2016 season, Hyde became an unrestricted free agent and on  March 9, 2017, the Buffalo Bills signed Hyde to a five-year contract. Hyde was named the starting strong safety to begin the regular season, along with free safety Jordan Poyer. Hyde made his Buffalo Bills regular season debut in their season-opener against the New York Jets and recorded three solo tackles, broke up a pass, and intercepted a pass by Josh McCown in the 21–12 victory. On October 1, 2017, Hyde made seven combined tackles, two pass deflections, and intercepted two passes by Matt Ryan during a 23–17 win at the Atlanta Falcons. It marked Hyde's first time intercepting multiple passes in a single game. On November 2, 2017, Hyde was named the AFC Defensive Player of the Month for October after making four interceptions in the last four games. On December 19, 2017, it was announced that Hyde was voted to the 2018 Pro Bowl, marking the first time he received the honor. He finished his first season with the Buffalo Bills with 82 combined tackles where 65 were solos, 13 pass deflections, and five interceptions in 16 games and 16 starts. He set new career-highs in all four statistical categories. Pro Football Focus gave Hyde an overall grade of 86.2, ranking 14th among all qualified safeties in 2017. Hyde and Poyer were one of the highest graded safety duos in 2017 and were considered as possibly the best tandem in the league by many NFL analysts and media members. He was ranked 62nd by his peers on the NFL Top 100 Player of 2018. 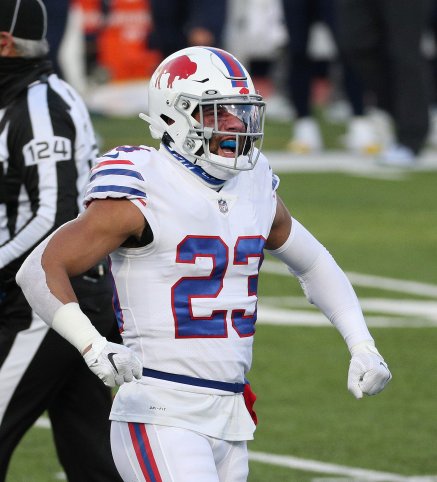 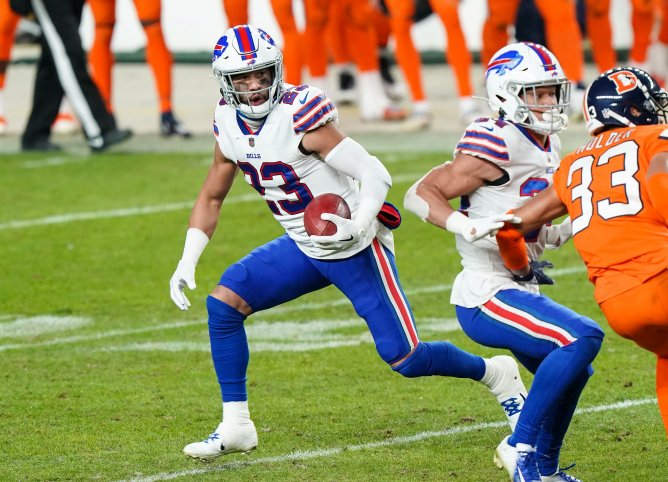 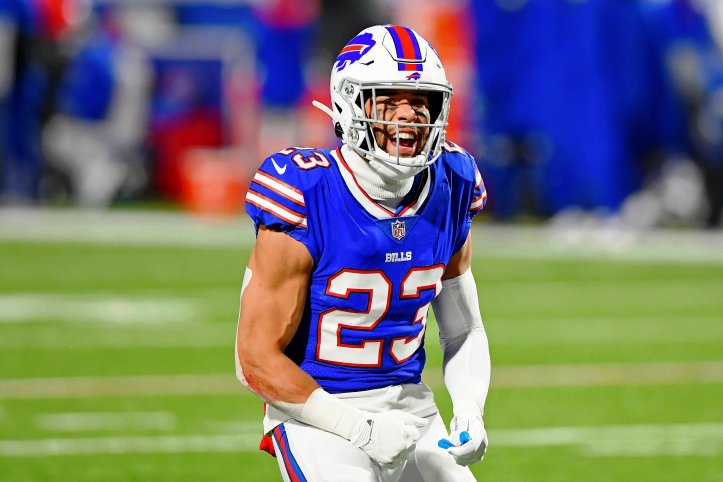 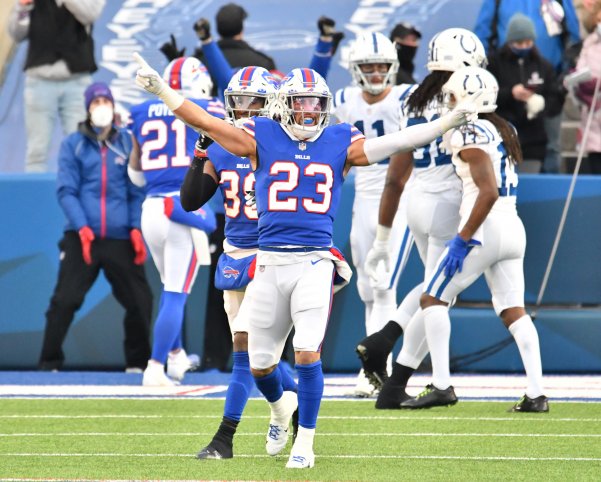 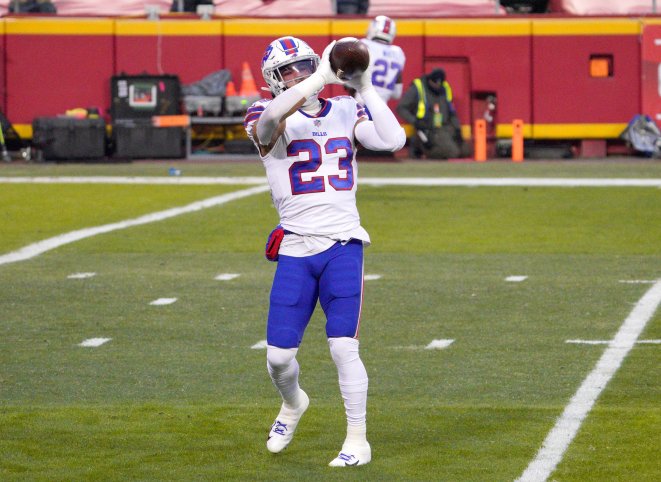 BUFFALO! I'm teaming up with @TSEBuffalo for an autograph signing! Head to the link below to grab a pre-sale item from the signing or to mail-in your item for me to sign! https://t.co/zDstuGMCEX https://t.co/LJiMKkdDZE

BUFFALO! I'm teaming up with @TSEBuffalo for an autograph signing! Head to the link below to grab a pre-sale item from the signing or to mail-in your item for me to sign! https://t.co/zDstuGMCEX https://t.co/z8cxLLtgD4