Allen attended Reedley College, a junior college where one of the football assistant coaches at the time was married to Allen's cousin. In his only season ...

In his first year at Wyoming, he played in two games and made one start. In his first career start, he attempted only four passes before suffering a broken collarbone which ended his season; because the injury occurred early in the season, he qualified for a medical redshirt. Allen returned from the injury in 2016 and was Wyoming's starter.

After throwing for over 3,200 yards and 28 touchdowns in 2016, he contemplated declaring for the 2017 NFL draft, initially telling his family, girlfriend, and a few friends that he would turn pro. Shortly before the deadline to declare for the draft, Vigen called Allen's father to explain why he should stay at Wyoming an extra year; according to Eisenberg, "When Joel Allen got off the phone and entered his son’s room, he found his son riddled with anxiety about his decision." Before the draft declaration deadline, Bohl told Allen that staying in school one more year would improve his long-term NFL prospects, and Allen also sought advice from Wentz, who told him that in the NFL, he would have many league veterans depending on him to "win games and help secure their jobs." Allen ultimately remained at Wyoming. He threw for 1,812 yards, 16 touchdowns, and six interceptions in 2017. Shortly after the completion of the 2017 NFL Draft, ESPN reporter Adam Schefter said about Allen's NFL prospects, "There was one personnel director who told me this week that you can put in the books, Josh Allen will be the No. 1 pick in the NFL draft next year." In December 2017, after leading the 8–5 Cowboys to a 37–14 win over Central Michigan in the 2017 Famous Idaho Potato Bowl, Allen announced he would be entering the 2018 NFL Draft. In his first mock draft in January 2018, ESPN draft analyst Mel Kiper Jr. predicted that the Cleveland Browns would select Allen over other top quarterbacks in the 2018 draft, such as Josh Rosen, Sam Darnold, Baker Mayfield, and Lamar Jackson.

Allen entered 2019 as the Bills' opening day starter, being named a team captain. On September 8, 2019, Allen led the Bills to a comeback win over the New York Jets in week 1. Despite the Bills being down 16–0 at one point in the third quarter, Allen led the team to 17 unanswered points. He finished the game with 254 passing yards on 24 completions, both career highs. He also had one passing touchdown, one rushing touchdown, and two interceptions. After leading Buffalo to its first 3–0 start since 2011, Allen struggled against a stout New England Patriots defense, throwing three interceptions, but became the first player to score an offensive touchdown on the Patriots in the 2019 season. He completed 13 of 28 passes for 153 yards and also rushed for 26 yards and the aforementioned touchdown before suffering a helmet-to-helmet hit from Patriots cornerback Jonathan Jones, which forced him out of the eventual 16–10 Bills loss. In the AFC Wild Card round against the Houston Texans, Allen started strong, breaking Jim Kelly's franchise postseason record for rushing yards by a quarterback (37) with a single 42-yard run on the first drive, and caught a 16-yard touchdown pass from wide receiver John Brown on a trick play, similar to what Nick Foles did in Super Bowl LII. After building a 16–0 lead early in the third quarter, the Bills were unable to keep momentum and ultimately had to come from behind in the final moments to force overtime. Overall, Allen finished with 92 rushing yards, 264 passing yards, 16 receiving yards, and one total touchdown as the Bills lost 19–22 in overtime. Allen was just the third player since 1975 with 25+ pass yards, 40+ rush yards, and 15+ receiving yards in a single game.

In the 2020 season, Allen broke Jim Kelly's franchise record for the most total touchdowns by a single player during a week 14 win over the Pittsburgh Steelers on Sunday Night Football after passing for two touchdowns during the game. He finished the game with 238 yards, two touchdowns, and an interception. The following week against the Denver Broncos, Allen helped the Bills clinch their first AFC East division title since 1995, six months before he was born. He finished the game with 359 yards passing and two passing touchdowns, in addition to 33 yards rushing and two scores on the ground, during the 48–19 Bills win. During a Week 16 rematch with the Patriots on Monday Night Football, Allen completed 27 of 36 attempts for 320 passing yards and 4 touchdowns, surpassing Kelly's franchise record for single-season passing touchdowns. By helping Buffalo win 38–9, Allen also allowed the Bills to sweep the Patriots for the first time since 1999. Allen was named the AFC Offensive Player of the Month for his performance in December.

Throughout the season, Allen was named the AFC Offensive Player of the Week four times, namely for his performance in Week 2 against Miami, week 9 against Seattle, week 13 against San Francisco, and week 15 against Denver.[ He became the first player in franchise history to win the award at least three times in a single season. On December 21, 2020, Allen and four of his teammates were named to the 2021 Pro Bowl, which will take place virtually due to the COVID-19 pandemic.

In the Wild Card round against the Indianapolis Colts, Allen completed 26 of 35 passes for 324 yards, rushed for 54 yards, and had three total touchdowns as the Bills won 27–24 giving the Bills their first playoff win since 1995.

Facing Lamar Jackson and the number-one rushing offense and top-ten defense in the Baltimore Ravens in the Divisional round, Allen and the Bills would find themselves on the right end of a defensive battle with a 17–3 win. Allen completed 62.2% of his passes for 206 yards and one touchdown with no turnovers.

The following week, Allen faced a rematch against the Kansas City Chiefs, whom the Bills faced in week 6, in Buffalo's first AFC Championship appearance since 1993. He completed 28 of 48 pass attempts for 287 yards, two touchdowns, and an interception that was his first career pick in the red zone, in addition to rushing for 88 yards, as the Bills lost 38–24. A minor scuffle occurred after Allen was tackled by Chiefs defender Alex Okafor after a play was blown dead in the fourth quarter, in which the former responded by flicking the ball at Okafor's helmet. Okafor began to taunt Allen until Bills linemen Jon Feliciano and Dion Dawkins shoved Okafor onto the ground. All four players received offsetting unsportsmanlike conduct penalties. 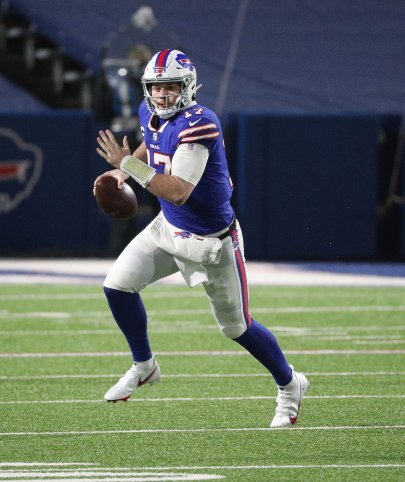 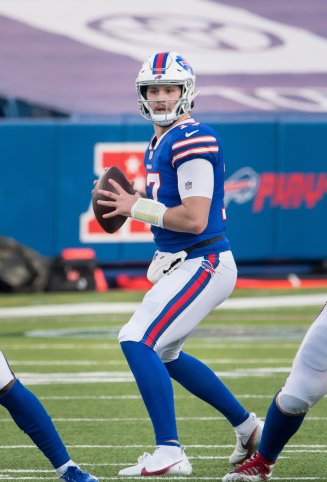 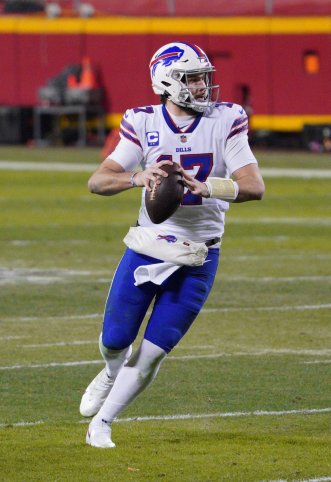 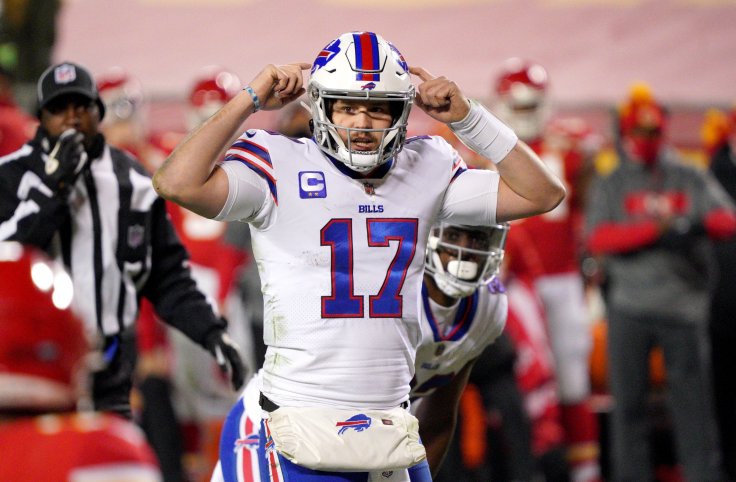 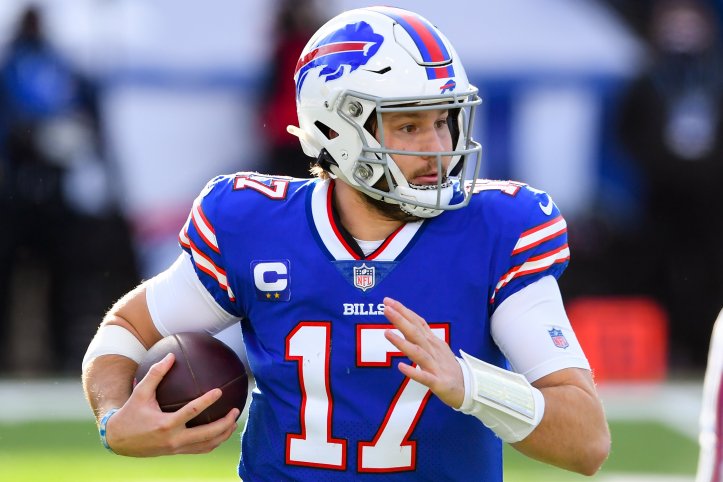 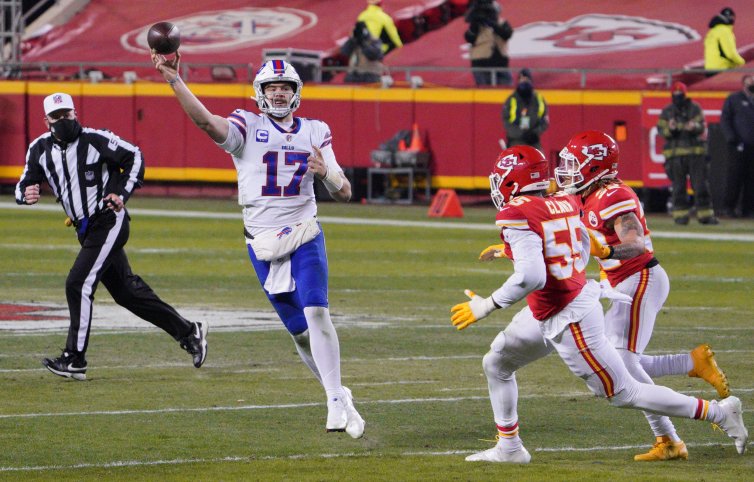 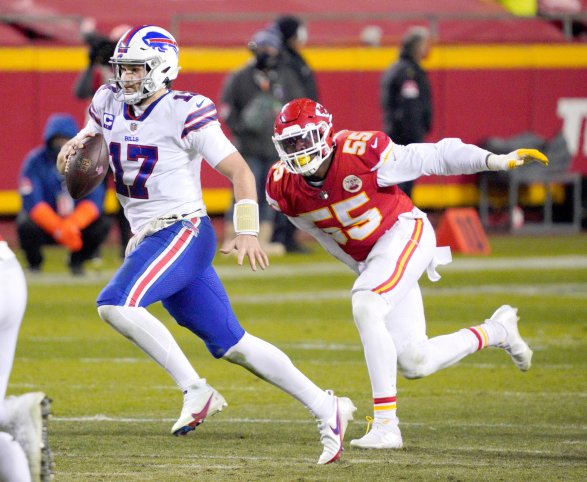 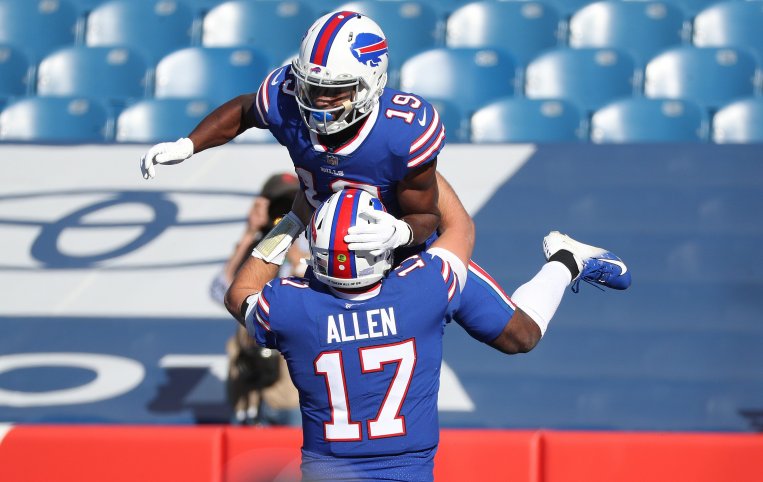 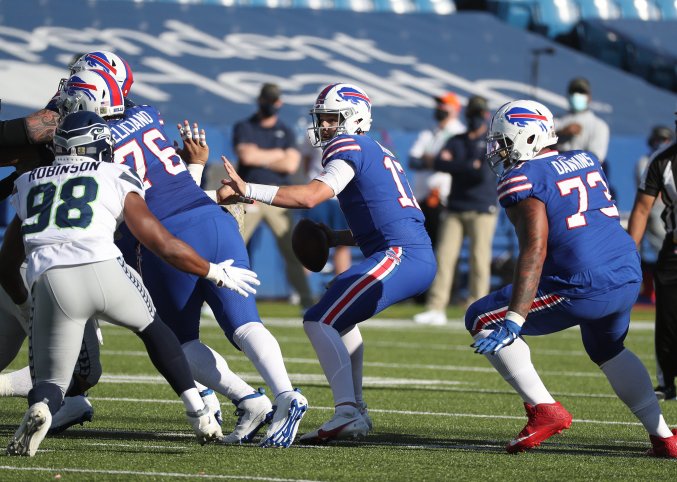 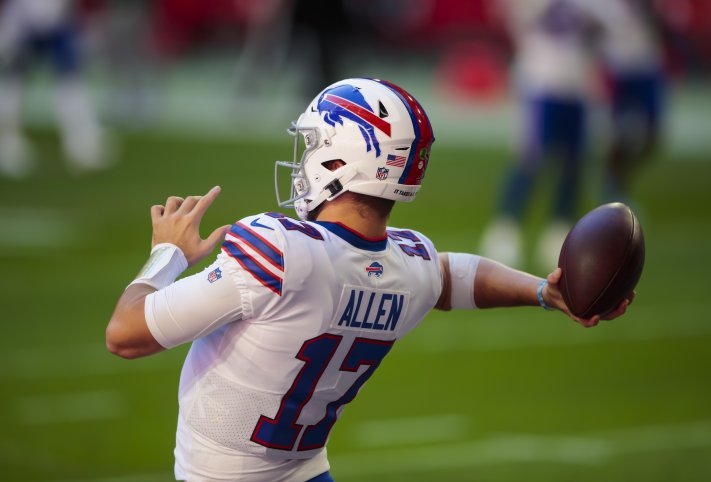 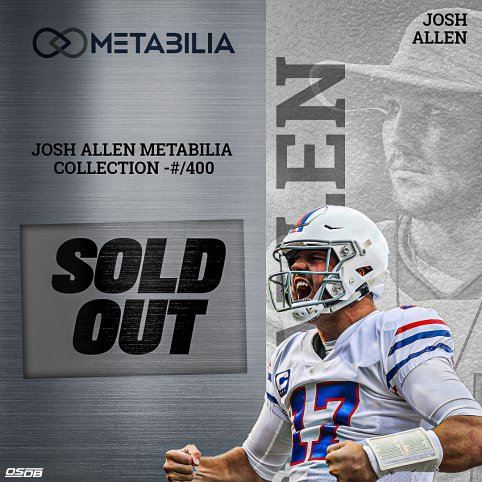