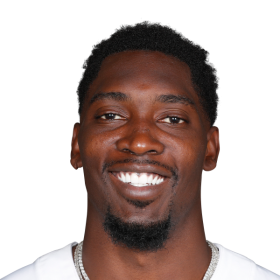 The safety of our Club members is our number one priority! In an effort to be proactive for our Club kids, Club staff, and our community, we have provided some helpful information on how to prevent the spread of Coronavirus.

get involved
City of Dreams Camp

Our mission is to help the youth living in San Francisco’s underserved communities build brighter futures through mentorship and youth development.

DeMarcus “Tank” Lawrence was born in Aiken, South Carolina to hard-working parents, Yvonne and Tyrone Lawrence. Raised in rural South Carolina, DeMarcus was tough and learned to take care of himself and others at an early age. His nickname “Tank” originated when he was young and out playing...

DeMarcus “Tank” Lawrence was born in Aiken, South Carolina to hard-working parents, Yvonne and Tyrone Lawrence. Raised in rural South Carolina, DeMarcus was tough and learned to take care of himself and others at an early age. His nickname “Tank” originated when he was young and out playing on the baseball court when a fight ensued between him and his friend.

He attended and played high school football at Silver Bluff High School.  Lawrence attended Butler Community College from 2010 to 2011. He transferred to Boise State University before the 2012 season. In his first year with the Broncos, he led the team in sacks with 9.5. In 2013, he again led the team with 10.5 sacks. After the season, he entered the 2014 NFL Draft.

After releasing franchise career sack leader DeMarcus Ware in a salary cap move and having previously lost starters Jason Hatcher and Jay Ratliff, the Dallas Cowboys looked to improve the talent of their defensive line in the 2014 NFL Draft.[10] The team traded up with the Washington Redskins moving to the 34th position, in exchange for a second (#47-Trent Murphy) and a third round (#78-Spencer Long) draft choices, in order to select Lawrence in the second round.

After fracturing his right foot in training camp, he started the year on the injured reserve list and did not appear in a game until Week 9 against the Arizona Cardinals. The lost time affected his play and with little impact (11 tackles with no sacks), he could not earn the starter right defensive end job ahead of Jeremy Mincey. On 2015, although defensive end Greg Hardy was the big offseason acquisition by the Cowboys, Lawrence had a bigger impact from his left defensive end position. He entered the season with an improved physical presence and would develop his edge rushing skills with every passing week.

He finished the season with a streak of seven games with at least a sack, registering a total of eight (led the team), 31 quarterback pressures (second on the team) and 56 tackles. His best games came against the New Orleans Saints, Tampa Bay Buccaneers, Washington Redskins, and the New York Jets. In January 2016, he had back surgery, which turned out to be more serious than originally expected. Lawrence had a breakout season in 2017 after shifting back over to the left side, his natural position. On September 17, 2017, in Week 2 against the Denver Broncos, Lawrence forced a fumble off quarterback Trevor Siemian.

The fumble helped set up the Cowboys on a touchdown-scoring drive in the 42–17 loss. In Week 3 of the 2017 season, Lawrence sacked Arizona Cardinals' quarterback Carson Palmer three times, giving him the league-lead 6.5 sacks. His performance in Week 3 earned him NFC Defensive Player of the Week. On March 5, 2018, the Cowboys placed the franchise tag on Lawrence, who officially signed it later that day after they were unable to come to terms on a long-term deal.

In Week 4 of the 2018 season, against the Detroit Lions, Lawrence matched his career-high with a three-sack performance. On October 13, 2018, it was revealed that Lawrence was diagnosed with a torn labrum in his shoulder, in which the injury was intact for two years. He finished the 2018 season with 10.5 sacks, 64 total tackles, 23 quarterback hits, one interception, and two forced fumbles. On March 4, 2019, the Cowboys placed the franchise tag on Lawrence, making him the highest-paid defensive end in the NFL. 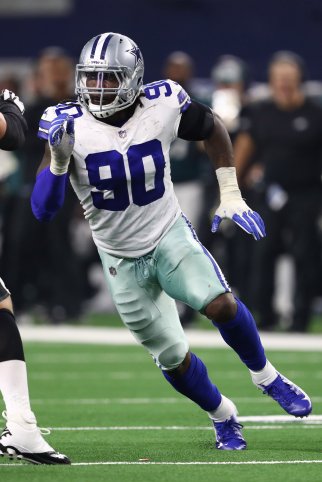 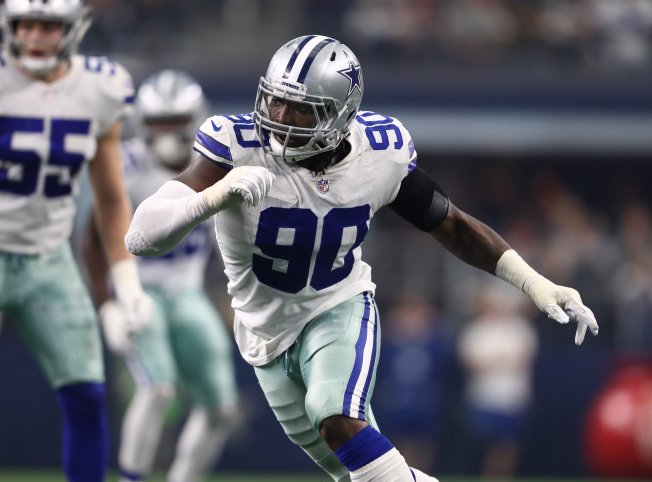 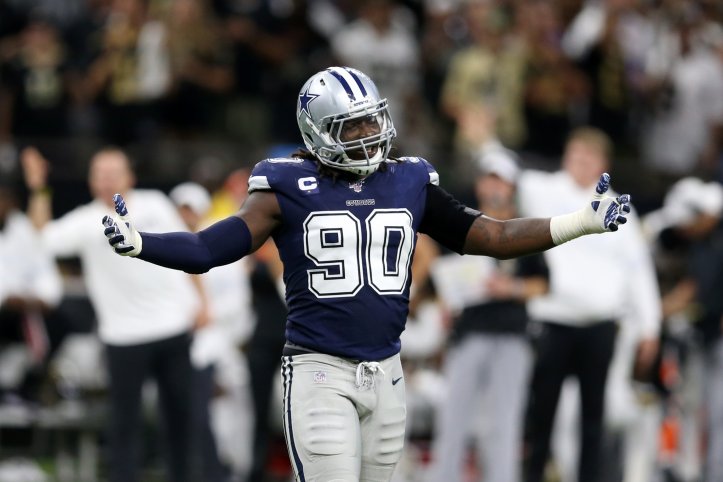 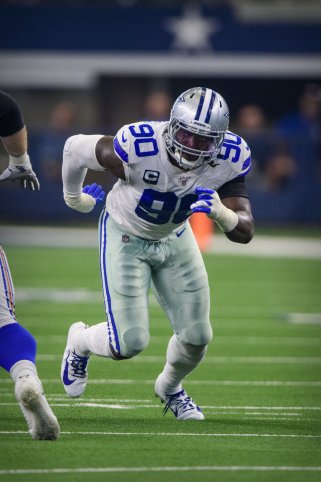 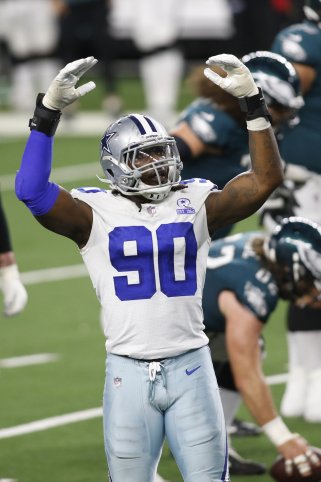 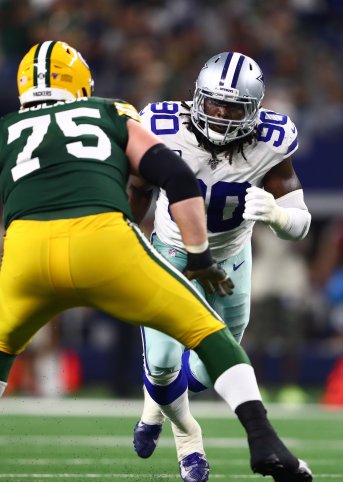 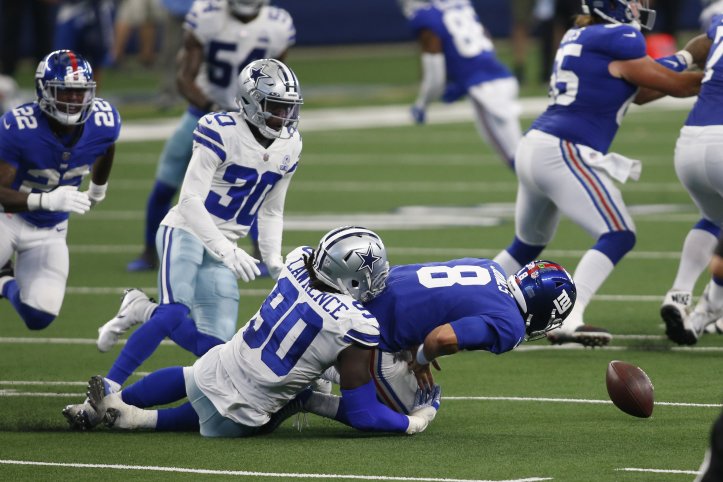 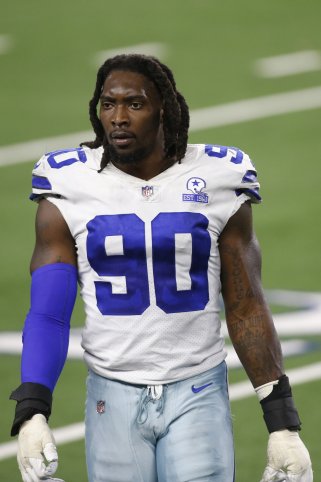 RT @TCrawford98: LEGGOOO COWBOYS NATION!!! NO ONE leaves the stadium with a voice today! Go ALL OUT for our Boyz! #WorkK @dallascowboys htt…

RT @dallascowboys: Waking up on #GAMEDAY like 🤠! Catch #SFvsDAL on @Nickelodeon at 3:30pm CT! https://t.co/L0PgmOfGjW

RT @BroncoSportsFB: Good luck to all of our Broncos in the @NFL Playoffs! Tune in to cheer them on during #SuperWildCard weekend ⤵️ https:…

Make sure to tune into @nickelodeon for their coverage of our NFL Wild Card TOMORROW AT 4:30/3:30c! You won't want to miss the slimiest game of the year!! 🤘🏿 #NickWildCard #AD https://t.co/3EHjioBD3R