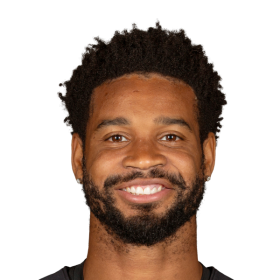 Athletes for Charity is a nonprofit organization whose mission is to serve as a charitable initiative dedicated towards encouraging the giving of time, financial resources, and information to improve the collective lives of disadvantaged youth, advance the common good and support the nonprofit sectors that benefit the underprivileged, including foster care children.

A native of Brunswick, Georgia, Slay attended Brunswick High School, where he was an all-state running back and defensive back. He was named All-State by The Atlanta Journal-Constitution at defensive back following his senior season, and was also chosen for the Georgia North-South All St...

A native of Brunswick, Georgia, Slay attended Brunswick High School, where he was an all-state running back and defensive back. He was nam...

A native of Brunswick, Georgia, Slay attended Brunswick High School, where he was an all-state running back and defensive back. He was named All-State by The Atlanta Journal-Constitution at defensive back following his senior season, and was also chosen for the Georgia North-South All Star Game. He rushed for over 1,300 yards and 15 touchdowns in the 2008 season, and intercepted six passes with two touchdown returns. His junior season was shortened by a torn MCL after he had rushed for 336 yards and six touchdowns in five games. As a sophomore, he put up 1,127 yards on 142 rushes with 13 touchdowns. Slay also lettered in basketball and was a standout track and field athlete. He was timed at 10.9 seconds in the 100 meters and 22 seconds in the 200 meters.

As a freshman at ICC, Slay earned First Team Mississippi Association of Community and Junior Colleges (MACJC) All-State and National Junior College Athletic Association (NJCAA) All-Region 23 honors after record 41 tackles, 3 tackles for loss, 1 sack and forced two fumbles after only playing five games for Coach Jon Williams and the Indians. After his stellar freshman season, he earned JC Gridwire Preseason Second Team All-American honors heading into his sophomore season.During his final season in Fulton, Slay recorded 32 total tackles, 1 tackle for loss, one forced fumble and one fumble recovery while hauling in three catches for 63 yards and a touchdown to earn MACJC First Team All-State honors on defense and special teams after playing in all nine games.

After ICC, he played for head coach Dan Mullen's Mississippi State Bulldogs football team in 2011 and 2012. In his two seasons for Mississippi State, he had 64 tackles, six interceptions, and two touchdowns.

Coming out of Mississippi State, Slay was projected to be a second or third-round draft pick by the majority of NFL draft experts and scouts. He received an invitation to the NFL combine and completed all of the required combine and positional drills. On March 6, 2013, Slay participated at Mississippi State's pro day in front of team representatives and scouts from 30 NFL teams.

The Detroit Lions selected Slay in the second round (36th overall) of the 2013 NFL Draft. Slay was the fifth cornerback drafted in 2013.

He earned his first start in his professional regular-season debut during the 2013 season opener against the Minnesota Vikings and recorded four solo tackles and a pass deflection as the Lions won 34–24. After giving up a big play, he was benched in favor for veteran Rashean Mathis in the fourth quarter. Slay started the following week, but after struggling he was demoted in favor of Mathis and only appeared on special teams during the Lions' Week 3 victory over the Washington Redskins. On September 29, 2013, Slay had a season-high seven combined tackles and a defense pass in a 40–32 victory over the Chicago Bears. Slay finished with 34 combined tackles (27 solo) and six passes defended in four starts and 13 games.

On 2014 Slay started the season-opener against the New York Giants and recorded three solo tackles and a season-high three pass deflections in a 35–14 victory. On September 28, 2014, Slay recorded five combined tackles, deflected a pass, and made his first career interception during a 24–17 victory at the New York Jets in Week 4. Slay made his first career interception off a pass by quarterback Geno Smith, that was originally intended for wide receiver Eric Decker, and returned it for a 40-yard gain in the fourth quarter. In Week 13, he collected a season-high eight combined tackles and had a season-high three pass deflections in the Lions' 34–17 win against the Chicago Bears. On December 14, 2014, Slay recorded five combined tackles, deflected two passes, and made an interception during the Lions' 16-14 win against the Minnesota Vikings in Week 15. Slay intercepted a pass by Vikings' quarterback Teddy Bridgewater, that was intended for wide receiver Greg Jennings, in the second quarter. He started in all 16 games in 2014 and recorded a career-high 61 combined tackles (48 solo), 17 pass deflections, and two interceptions.

He started in the Detroit Lions' season-opener at the San Diego Chargers and recorded five solo tackles, a pass deflection, and intercepted a pass by quarterback Philip Rivers during a 28-33 loss. On December 13, 2015, he recorded two solo tackles, deflected a pass, and intercepted St. Louis Rams' quarterback Case Keenum during a 14–21 loss. The next week, he collected a season-high seven combined tackles and two pass deflections, as the Lions defeated the New Orleans Saints 35–27. He started all 16 games in 2015 and recorded 59 combined tackles (48 solo), 13 pass deflections, and two interceptions.

On July 29, 2016, the Detroit Lions signed Slay to a four-year, $48.15 million contract extension with $23.1 million guaranteed and a signing bonus of $14.5 million. Slay entered training camp as the No. 1 cornerback on the Lions depth chart after the Lions opted to not re-sign Rashean Mathis. Head coach Jim Caldwell named Slay and Nevin Lawson the starting cornerbacks in 2016, along with nickelback Quandre Diggs.

On October 2, 2016, Slay recorded four solo tackles, a season-high three pass deflections, and made his first career sack during the Lions' 17–14 loss at the Chicago Bears in Week 4. Slay sacked quarterback Brian Hoyer for a seven-yard loss in the first quarter. In Week 7, Slay recorded two combined tackles. He finished the 2016 season with 44 combined tackles (43 solo), 13 passes defensed, two interceptions, a sack, and a forced fumble in 13 games and 13 starts.

On September 18, 2017, Slay recorded a season-high eight combined tackles and two pass deflections during a 24–10 win against the New York Giants. In Week 3, he made five solo tackles, defended two passes, and intercepted two passes by quarterback Matt Ryan during a 30-26 loss to the Atlanta Falcons. He returned one 37 yards as the Lions were defeated by the Falcons 26–30. It was the first game of his career with multiple interceptions in the same game. On December 16, 2017, Slay made five combined tackles, three pass deflections, and intercepted two passes by quarterback Mitchell Trubisky in the Lions' 20–10 win over the Chicago Bears. His performance earned him NFC Defensive Player of the Week honors. His two interceptions gave him the lead for most interceptions seventh interception, while his 27 passes defended also led the league. Slay became the first Lions player with seven interceptions in a season since Glover Quin in 2014, and the first Lions cornerback to do so since Bruce McNorton in 1983. Since 2000, Slay is the only player in the NFL to accumulate five tackles, two interceptions and three pass defenses twice in the same season.

On December 20, 2017, it was announced that Slay was selected to play in the 2018 Pro Bowl, marking the first Pro Bowl selection of his career. He started in all 16 games in 2017 and recorded 60 combined tackles (54 solo), a career-high 26 pass deflections, and eight interceptions. His eight interceptions led the league in 2017. Slay was named First-Team All-Pro for the 2017 season. Pro Football Focus gave Slay an overall grade of 80.6, which ranked 16th among all qualifying cornerbacks in 2017. He was also ranked 49th by his peers on the NFL Top 100 Players of 2018. On 2018, in Week 14, Slay returned an interception off of quarterback Josh Rosen 67 yards for a touchdown in a 17-3 win over the Arizona Cardinals, earning him NFC Defensive Player of the Week. 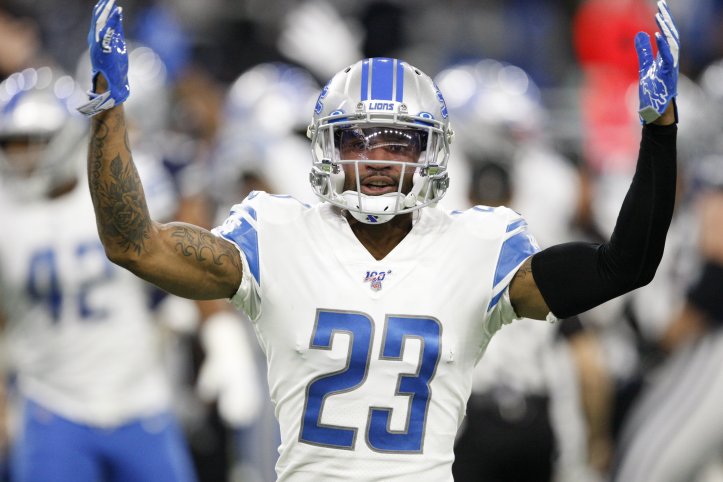 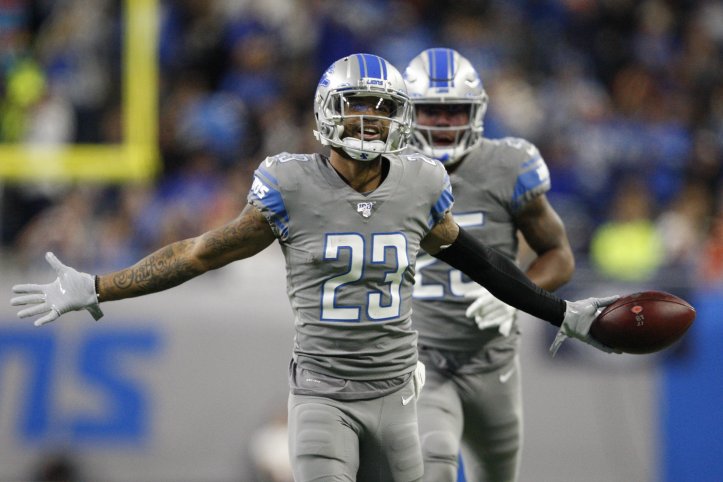 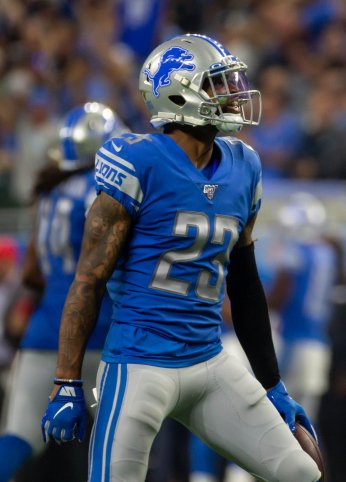 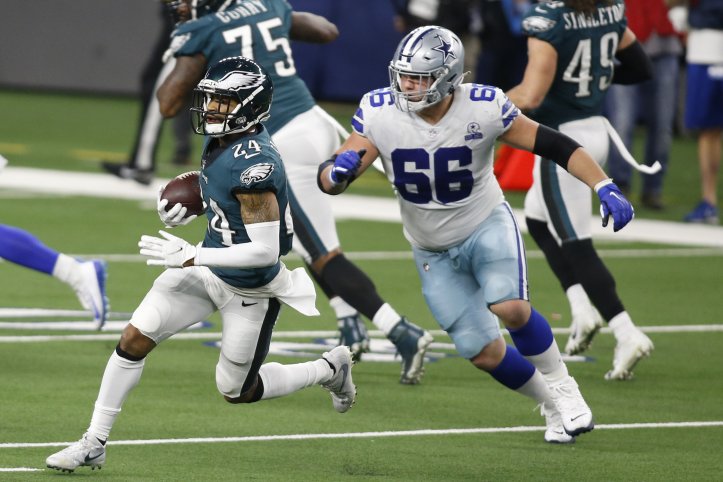 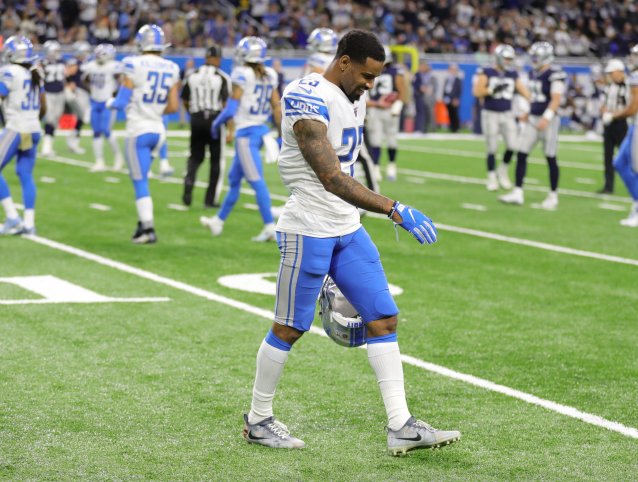 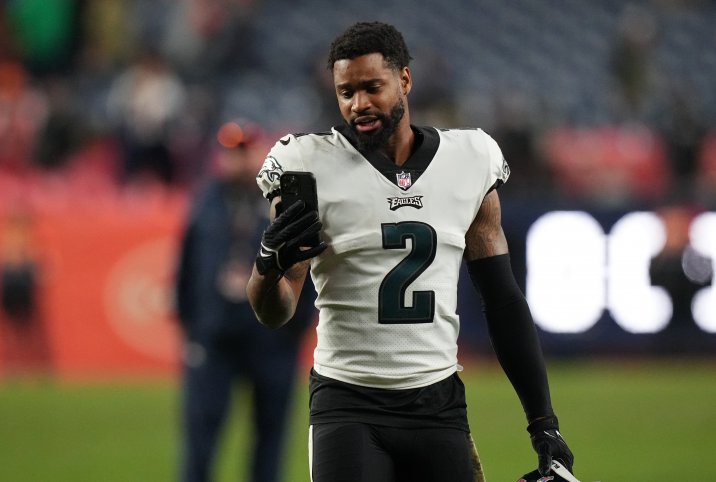 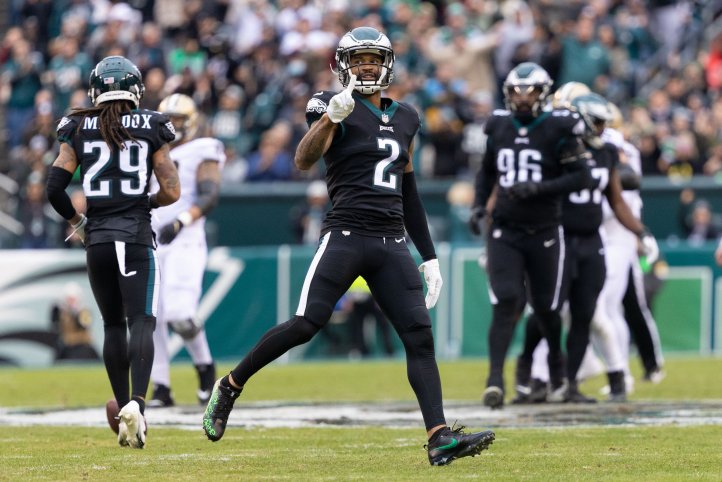 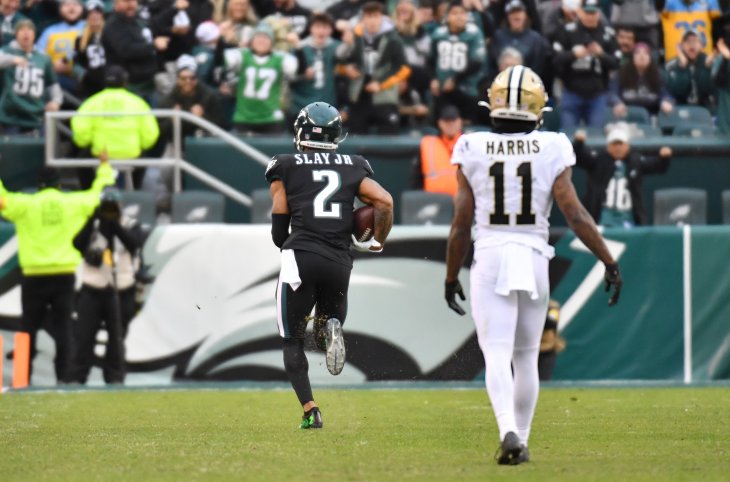