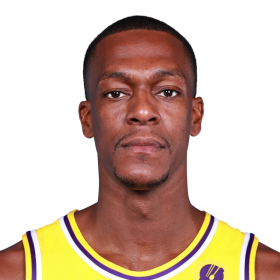 Rajon Rondo is known for doing a plethora of community work across the country. One of his more well known instances is when he took 10 boys from a struggling Chicago neighborhood in as mentees. He bought them nicer clothes and brought them to an up-scale restaurant, many of them for the first time. He became a role model and mentor for these kids, inspiring them to do and be better. Rondo has famously said "You don't do charity work for publicity. Well, I know I don't. Everybody's different."

Feeding America is the nation’s largest domestic hunger-relief organization. Thanks to donations and support from businesses, government organizations and individuals like you, the Feeding America network of food banks, pantries and meal programs serve virtually every community in the United States — 40 million people, including 12 million children and 7 million seniors.

The American Diabetes Association raises awareness and support in several ways. The Tour de Cure, the Step Out: Walk to Stop Diabetes, and other events have helped us make important headway against diabetes. Of course, there’s still much more to do. Our events inspire people all over the world and take place in communities across the map. They help us raise funds to support our mission as we continue our critical work. And they help us build a massive community of people who are united in our mission: to prevent and cure diabetes and to improve the lives of all people affected by this disease.

He has three siblings: Dymon, William and Anton. He had little contact with his father, who left his family when he was seven years old. To support the family, his mother worked the third shift at Philip Morris USA, a tobacco company. Rondo was first interested in football, before his mot...

He has three siblings: Dymon, William and Anton. He had little contact with his father, who left his family when he was seven years old. To...

He has three siblings: Dymon, William and Anton. He had little contact with his father, who left his family when he was seven years old. To support the family, his mother worked the third shift at Philip Morris USA, a tobacco company. Rondo was first interested in football, before his mother steered him towards basketball because she felt that the sport would be less punishing on his skinny frame.

After Rondo became serious about basketball, he attended Louisville's Eastern High School for three years. During his junior year at Eastern High School, he averaged 27.9 points, 10.0 rebounds and 7.5 assists which earned him a spot on the All-State honors and was named the 7th Region Player of the Year. He transferred to Virginia's Oak Hill Academy for his senior year where he averaged 21.0 points per game (ppg), 3.0 rebounds per game (rpg) and 12.0 assists per game (apg) and finished the 2003–04 season with a 38–0 record. In his senior year at Oak Hill Academy, Rondo broke Jeff McInnis's single-season school record of 303 assists, while averaging a double-double. There, he included two efforts of 27 assists and a single-game school record of 31, merely four away from the all-time national record. He also had a 55-point game in high-school, second highest all-time in Oak Hill Academy, surpassed only by Calvin Duncan with 61. Rondo was named to the McDonald's All-American Team in 2004 and scored a total of 14 points, 4 assists and 4 rebounds in the all-star game. He also participated in the 2004 Jordan Capital Classic game, logging 12 points, 5 assists, and 4 steals. Rondo was also named a second-team Parade All-American. He ended his career as Oak Hill Academy's all-time assists leader in a single season with 494 assists, surpassing McInnis.

Rondo committed to Kentucky over hometown Louisville. Rondo, along with All-Americans Joe Crawford and Randolph Morris, gave coach Tubby Smith and Kentucky the top-rated recruiting class for 2004 according to Rivals.com. Rondo led Kentucky to several wins including victories against the Louisville, South Carolina and Central Florida, but Kentucky failed to advance to the Final Four of the NCAA Tournament in either Rondo's freshman or sophomore seasons. He was named to the SEC All-Freshmen Team. He set a Kentucky record for most steals in single-season, with a total of 87 steals in his freshman year and made at least one steal in every game. He finished his freshman year at Kentucky averaging 8.1 points, 2.9 rebounds, 3.5 assists and 2.6 steals.

He was drafted 21st overall by the Phoenix Suns in the 2006 NBA draft. He was subsequently traded to the Celtics, where he played a supporting role during his rookie season. Rondo, a four-time NBA All-Star, had led the league in assists per game three times (2012, 2013, and 2016). He was named to the All-NBA Third Team in 2011–12 and has earned four NBA All-Defensive Team honors, twice on the First Team (2009–10 and 2010–11). During his time in Boston, Rondo helped the Celtics advance to the NBA Finals in 2008 and 2010, winning a championship in 2008 as the team's starting point guard. Rondo has long been known as an elite facilitator in the NBA, ranking fourth in Celtics history in assists and third in steals. He is also considered a stat-sheet stuffer, ranking 11th in NBA history for triple-doubles with 32 in the regular season, to go with 10 in the playoffs.

After 8½ seasons with the Celtics, Rondo was traded to the Dallas Mavericks in December 2014. A short five-month stint ensued, and in 2015, Rondo joined the Sacramento Kings. In 2016, he joined the Chicago Bulls, before joining the New Orleans Pelicans in 2017.

On July 6, 2018, Rondo signed a one-year, $9 million contract with the Los Angeles Lakers, who expected him to mentor and compete with second-year point guard Lonzo Ball. In his debut for the Lakers in their season opener on October 18, Rondo recorded 13 points and 11 assists in a 128–119 loss to the Portland Trail Blazers. Two days later, in a game against the Houston Rockets, Rondo and Chris Paul got into a fist fight over a shove by Brandon Ingram delivered to James Harden. The conflict, worsened due to Paul's claim that Rondo spat on him, resulted in Rondo receiving a three-game suspension. After breaking his right hand in a 126–117 win over the Trail Blazers on November 14, Rondo was ruled out for four to five weeks. In his return game on December 21 after missing 17 games, Rondo had eight points and nine assists off the bench in a 112–104 win over the New Orleans Pelicans. On December 25 against the Golden State Warriors, after just three games back from his hand injury, Rondo suffered a sprain to his right ring finger. He underwent surgery three days later and was subsequently ruled out for an estimated four to five weeks. He returned to action on January 24, 2019, after missing 14 games, recording 15 points, 13 assists and six rebounds in a 120–105 loss to the Minnesota Timberwolves. On January 31, he had 14 points and 13 rebounds in a 123–120 overtime win over the Los Angeles Clippers. On February 7, he hit a 20-foot jumper as time expired in Boston to lift the Lakers to a 129–128 win over the Celtics, as he finished with 17 points and 10 assists. It was his first career go-ahead field goal in the final 10 seconds of the fourth quarter or overtime. On March 4, Rondo moved to 11th place in triple-doubles in NBA history when he recorded his 32nd triple-double with a season-high 24 points, 10 rebounds and 12 assists as the Lakers lost 113–105 to the Clippers. On March 29, he had 17 assists and five steals in a 123–115 win over the Charlotte Hornets, becoming the first Laker with at least 17 assists and five steals since Magic Johnson in December 1989.

On July 8, 2019, Rondo re-signed with the Lakers. He won his second NBA title in 2020. After the season, Rondo joined the Atlanta Hawks, where he stayed for half a season before being traded to the Los Angeles Clippers for the remainder of the season. Rondo was traded to the Memphis Grizzlies during the 2021 offseason and agreed to contract buyout to become a free agent. 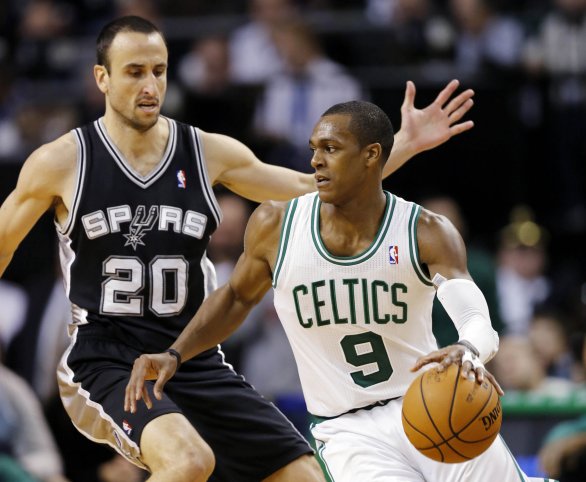 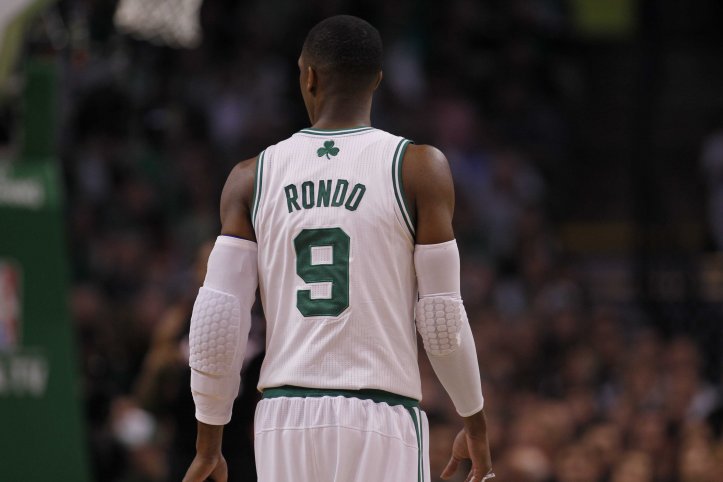 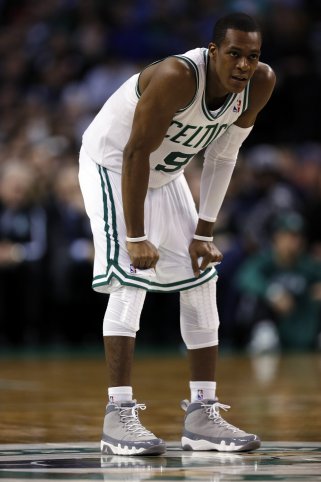 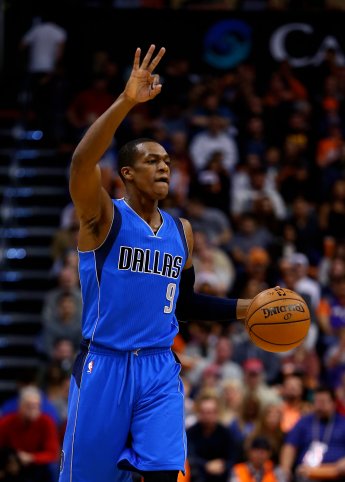 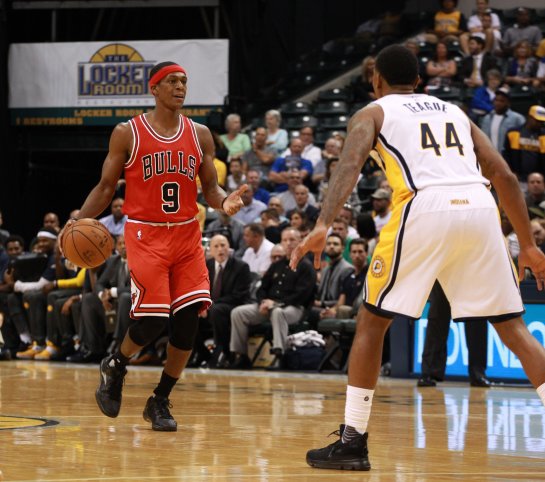 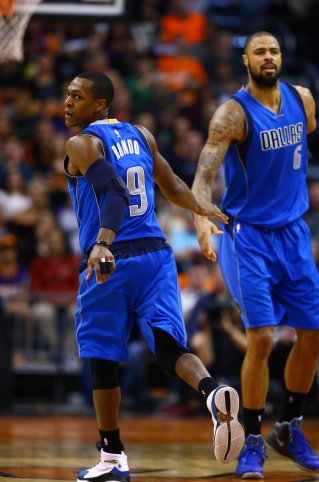 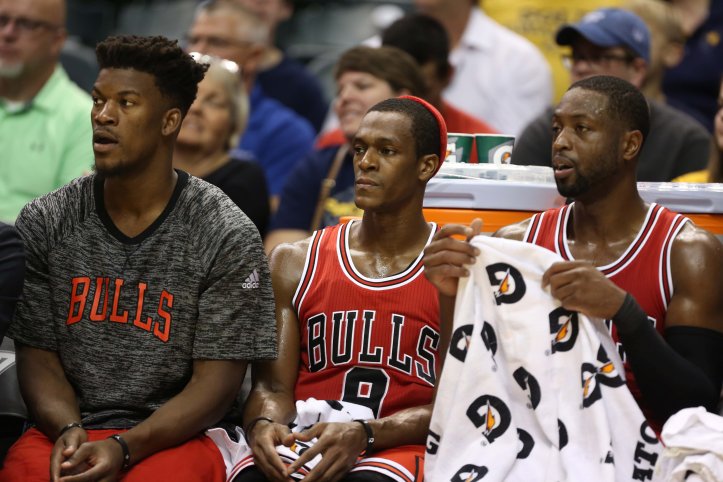 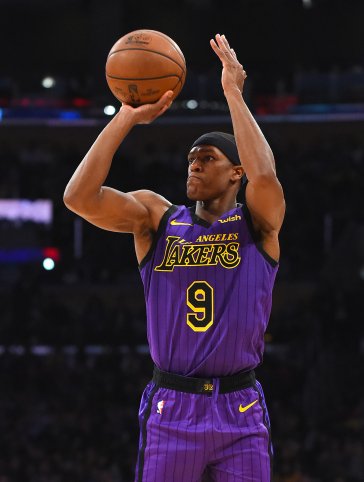 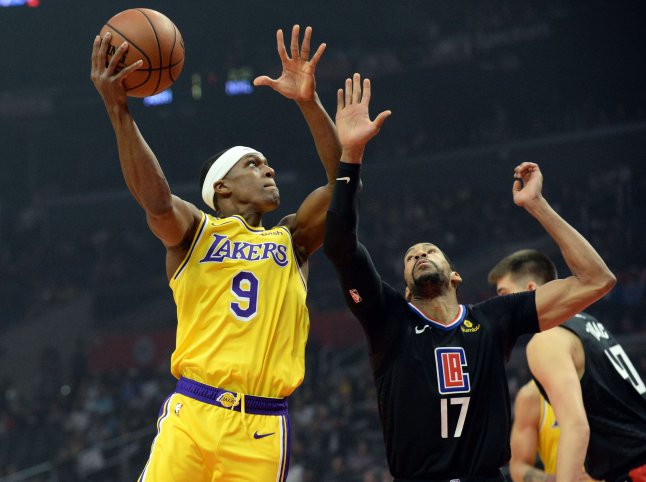 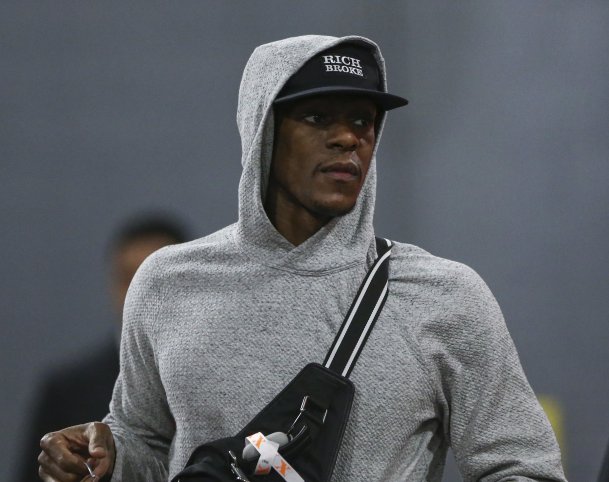 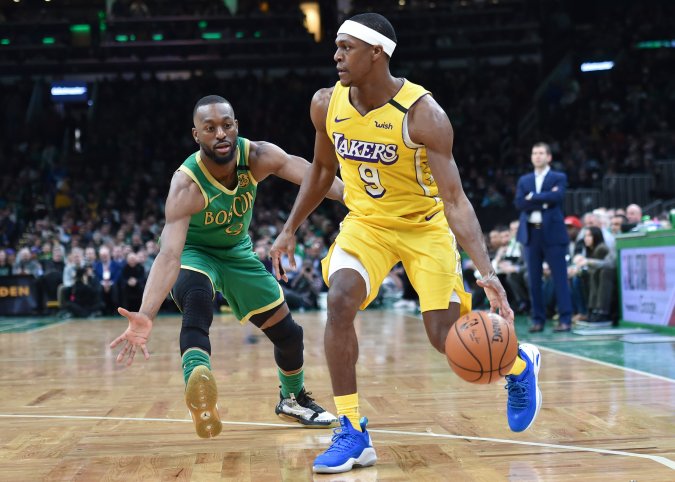 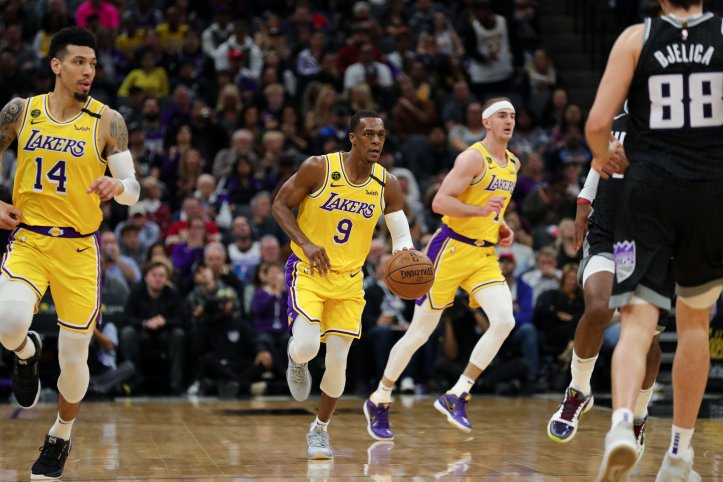 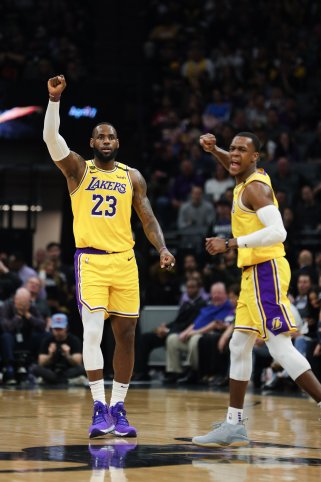 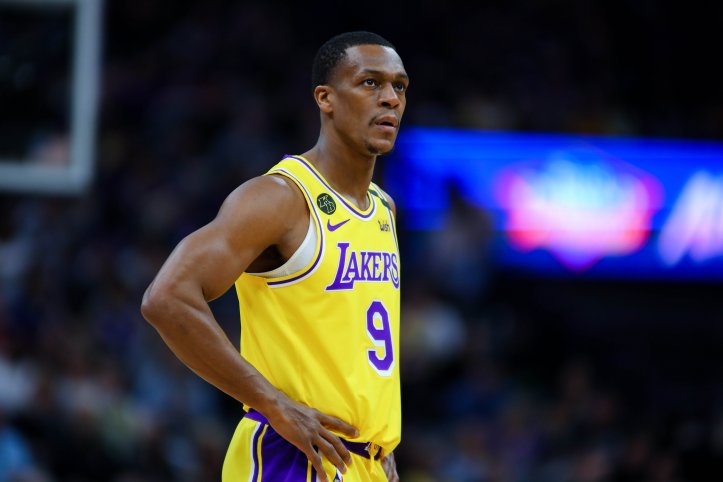 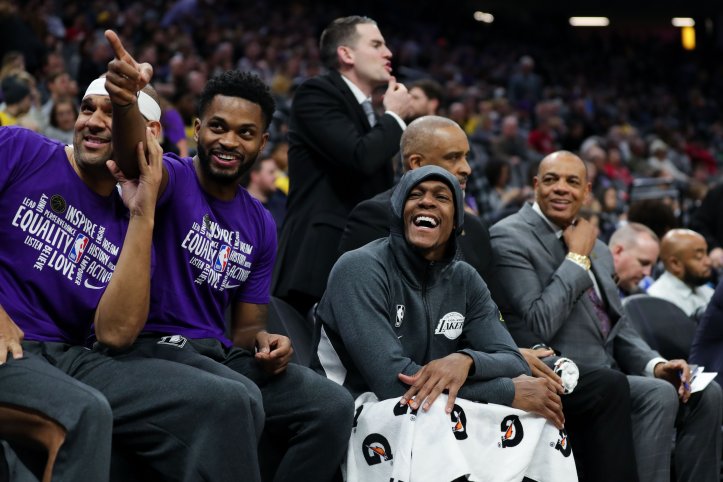 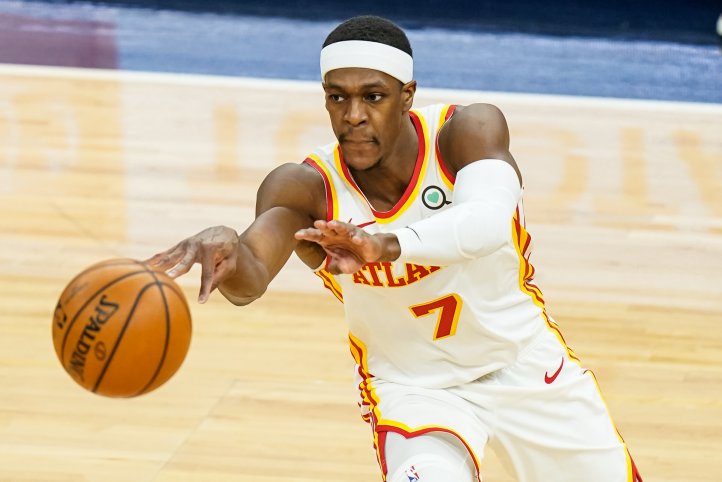 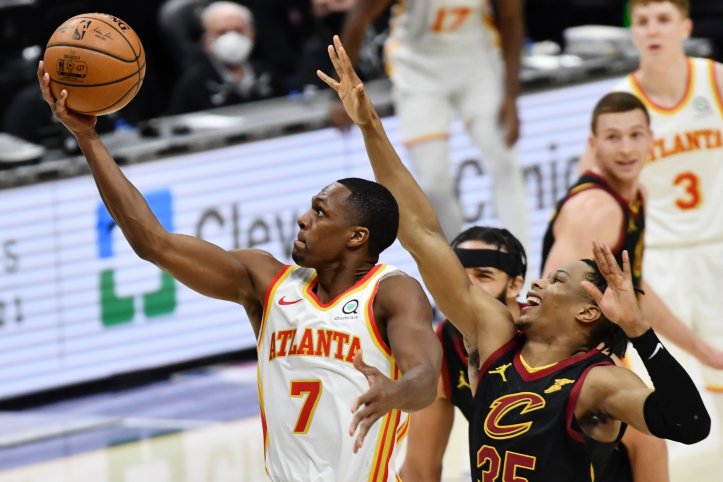 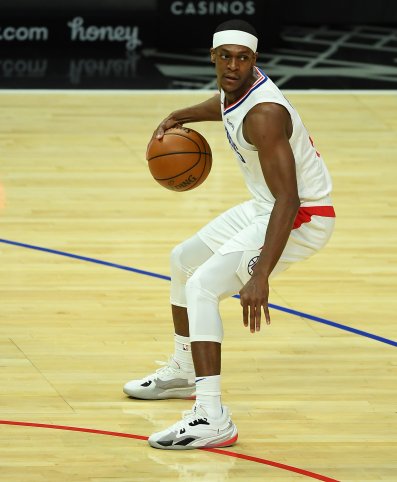 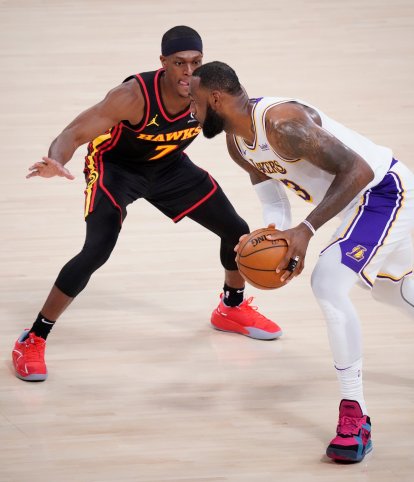 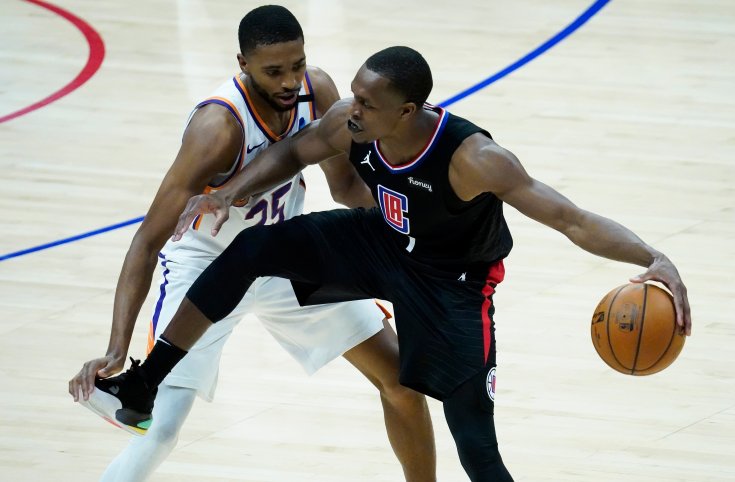