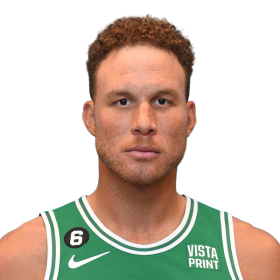 Blake Griffin partnered with the Dream Center’s Back to School Bash to give out backpacks for families in advance of the school year.

Blake Griffin and 11-year old Children’s Hospital of Los Angeles (CHLA) patient Justice Griffith collaborated on a specially designed, custom pair of Jordan Brand Super.Fly 5 shoe called the “Just 5”. Griffin wore the shoes during the Clippers March 29 game vs. Washington and the game-worn “Just 5” was auctioned off to raise money for CHLA as part of their annual “Make March Matter” fundraising program.

With the goal of fostering a long-term partnership, Team Griffin Foundation made a substantial donation to Young Storytellers, an organization that engages creativity through the art of storytelling. Using the timeless techniques of mentoring, collaboration, and performance, Young Storytellers provides public school students with the opportunity to write stories and see them brought to life on stage and film. YST's mission is to inspire young people to discover the power of their own voice.

get involved
Stand Up to Cancer

Stand Up To Cancer funds the newest and most promising cancer treatments to help patients. Learn about our efforts to make every cancer patient a survivor.

Focusing the spotlight on people left behind after natural disasters and human crises, Aid Still Required partners with community leaders to create programs that truly fit the needs of those affected.

MENTOR’s mission is to fuel the quality and quantity of mentoring relationships for America’s young people and to close the mentoring gap for the one in three young people growing up without this critical support.

The Team Griffin Foundation have donated funds and resources to completely transform the existing parking lot into a side-by-side, all-weather basketball court and futsal court. The courts will be managed by the City Center and available to youth in the Warr Acres/Oklahoma City community

Enabling all young people, especially those who need us most, to reach their full potential as productive, caring, responsible citizens.

DoSomething.org makes the world suck less. One of the largest orgs for young people and social change, our 2.5 million members tackle campaigns that impact every cause, from poverty to violence to the environment to literally everything else. Any cause, anytime, anywhere.

His father was a basketball center and track standout at Northwestern Oklahoma State University. Griffin and his older brother, Taylor Griffin, were home-schooled by their mother from first grade until Taylor was in the tenth grade and Blake was in eighth. G...

His father was a basketball center and track standout at Northwestern Oklahoma State University. Griffin and...

His father was a basketball center and track standout at Northwestern Oklahoma State University. Griffin and his older brother, Taylor Griffin, were home-schooled by their mother from first grade until Taylor was in the tenth grade and Blake was in eighth. Growing up, Griffin was good friends with future NFL quarterback Sam Bradford. Bradford's father owned a gym where Blake and Taylor played basketball. Before deciding to focus on basketball, Griffin also played baseball as a first baseman and football as a wide receiver, safety, and tight end.

At Oklahoma, Blake Griffin became one of the most highly rated and decorated recruits. During his freshman season, he had an average of 14.7 points and 9.1 rebounds. Because of his outstanding skills, it was expected that he would be a lottery pick for the 2008 NBA draft. However, he decided to give more time to his college team and try to win the NCAA championship. During his sophomore year, he won all six of the national player of the year awards. Because of his outstanding performance, he was also named Player of the Year by several media outlets such as the ‘Big 12’, ‘Sports Illustrated’, ‘FoxSports.com’ and ‘The Sporting News’. He also won other awards, such as the Adolph Rupp Trophy, John Wooden Award and the Oscar Robertson Trophy.

Blake Griffin declared himself available for the NBA draft after finishing his sophomore year. In the 2009 NBA draft, he was drafted into the Los Angeles Clippers as the first overall pick. He took part in their Summer League Team where he was named Summer League MVP. However, he injured his kneecap during the final preseason game. It was confirmed that he had a stress fracture, which made him miss the 2009-10 season. Griffin made his debut as a rookie during the 2010-11 season. He made his debut against the Portland Trail Blazers, where he registered 20 points with 14 rebounds. His performance during the rest of the season was also commendable, and he became the first rookie to have two 40+ point games in his rookie season after the 1996–97 season. He was also voted to the 2011 NBA All-Star Game by coaches as a reserve. This made him the first rookie to play in the All-Star game since Yao Ming eight years back.

He took part in the 2011 Rookie Challenge as well, where he won the Sprite Slam Dunk Contest during the All-Star break. He was named as one of the NBA’s 15 Greatest Rookies of All Time by the Sports Illustrated Magazine. He also led all rookies in points, rebounds as well as in double-doubles, which won him the ‘Rookie of the Year’ Award as well.

In the 2013-14 season, he registered a career-high of 24.1 points per game. He was also voted as a starter in the NBA All-Star Game, which made it his fourth All-Star appearance. Griffin was traded off to the Detroit Pistons in January 2018. He made his debut for the team after three days, in a match against Memphis Grizzlies. He recorded 24 points and 10 rebounds with five assists, leading his team to a 104-102 win against the Memphis Grizzlies. In his first full year in Detroit, Griffin averaged a career-best 24.5 points per game.

On January 29, 2018, Griffin was traded to the Detroit Pistons. He made his debut for the Pistons three days later.

On March 8, 2021, Griffin signed with the Brooklyn Nets. On March 21, Griffin made his debut for the Nets.

Griffin made his acting debut in 2016 in the Broad City episode "B&B-NYC". Griffin also appeared in the Whitney Cummings comedy The Female Brain; of his performance, critic Christy Lemire wrote, "Griffin especially impresses with his deadpan delivery and timing. He may have a whole 'nother career waiting for him if this whole NBA thing doesn’t work out." On October 1, 2020, it was announced that Griffin would host and present Double Cross with Blake Griffin, a hidden camera television series premiering in 2021. 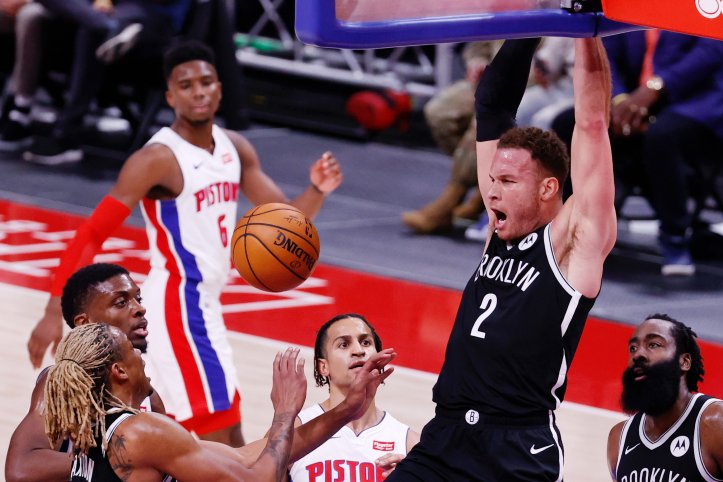 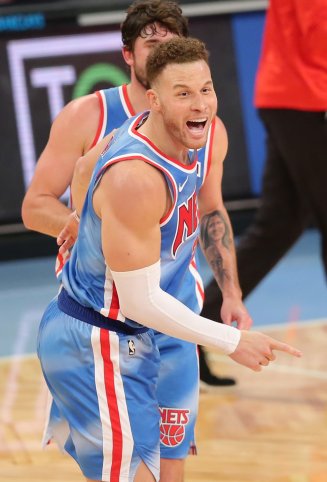 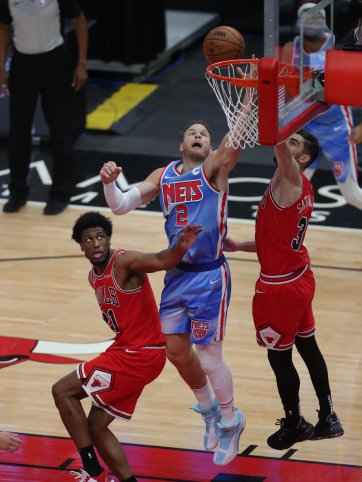 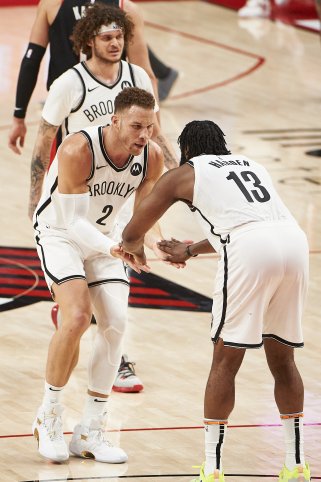 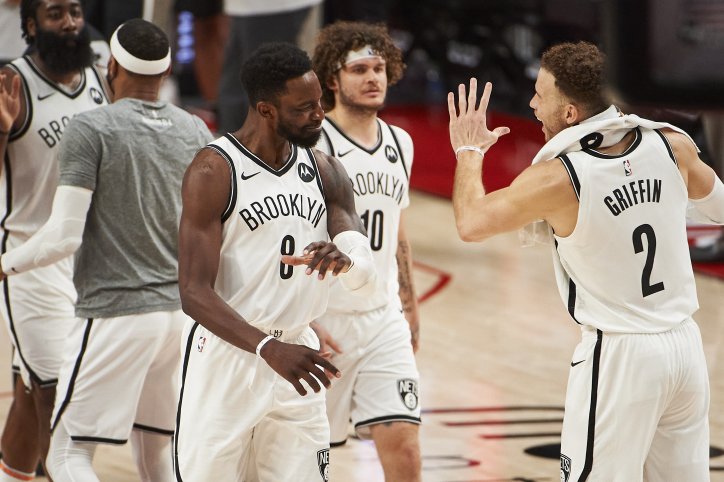 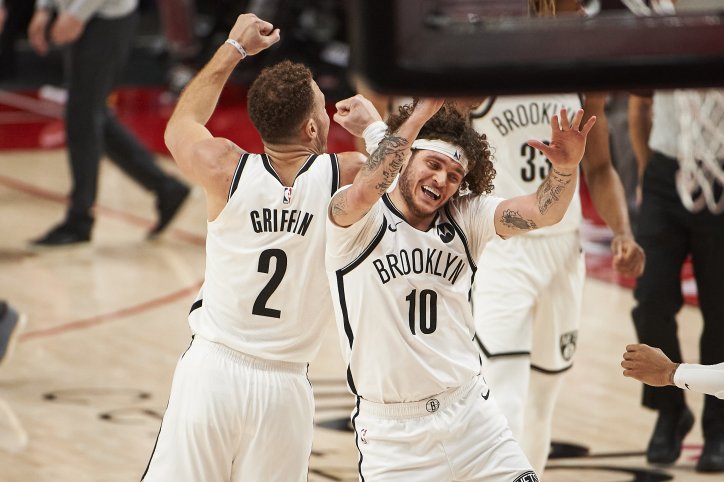 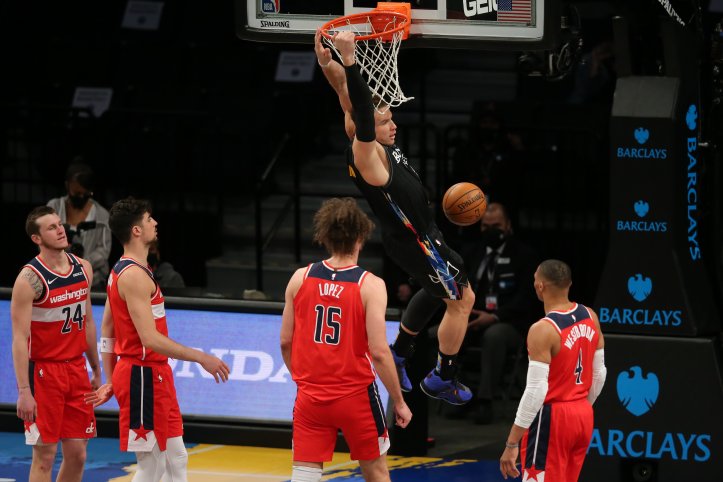 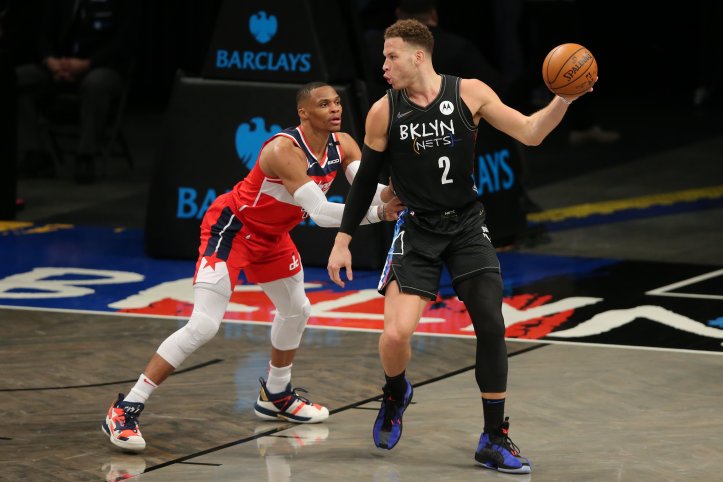