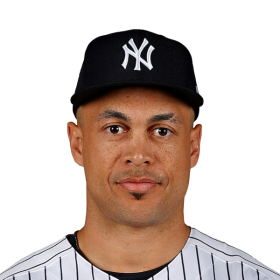 In 2014, Giancarlo Stanton of the Miami Marlins made the baseball world sit up and take notice. He not only established himself as baseball’s premier power hitter, he also proved he had the brains to match the brawn he brings to each plate appearance. No one Giancarlo’s age hits the ball h...

In 2014, Giancarlo Stanton of the Miami Marlins made the baseball world sit up and take notice. He not only established himself as baseball’

In 2014, Giancarlo Stanton of the Miami Marlins made the baseball world sit up and take notice. He not only established himself as baseball’s premier power hitter, he also proved he had the brains to match the brawn he brings to each plate appearance. No one Giancarlo’s age hits the ball harder or longer. Nor can anyone carry a talent-starved ball club the way he does. When Giancarlo digs in at the batter’s box, you can hear the buzz in the ballpark—and literally see the fear in the faces of opposing pitchers and managers.

Stanton is originally from the Greater Los Angeles region. He graduated from Notre Dame High School in Sherman Oaks, Los Angeles, before the Marlins selected him in the second round of the 2007 MLB draft. In 2017, Stanton led the MLB in home runs (59), runs batted in (RBIs) (132), and slugging percentage (.631), winning the National League Most Valuable Player (MVP) Award. A four-time MLB All-Star, Stanton has twice won both the NL Hank Aaron and outfield Silver Slugger Award after leading the league in home runs.

On August 27, Stanton became the first player since Chris Davis in 2013 to hit 50 home runs in one season. Stanton also became the sixth player in MLB history to reach 50 home runs before the end of August.During the August 29 game versus the Washington Nationals, he hit his 18th home run of the month, tying Rudy York for the most home runs in August, set in 1937. Stanton won the NL Player of the Month Award for August, leading the major league with 18 home runs, 37 RBI, 28 runs scored and .899 slugging percentage. Stanton hit his 57th home run and drove in four runs on September 23 versus Arizona, giving him 125 RBIs on the season, and passing Preston Wilson's franchise record of 121 set in 2000. Enhancing the cachet of Stanton's historic season, ESPN ranked Marlins Park as one of the six most difficult stadiums in which to hit a home run in 2017.

He finished the season with 59 home runs and 132 RBI, and batted .281. He yet again hit the ball with the highest exit velocity in the major league all season, at 120.1 miles per hour. He also had the highest ISO (Isolated Power) of all MLB players in 2017, at .350. He was also the first player in the National League since Prince Fielder in 2007 to hit 50 or more home runs in a season.

Before Game 2 of the World Series, Stanton was presented with the Hank Aaron Award, the second of his career, as the "most outstanding offensive performer" in the National League. On November 16, Stanton was named the National League's Most Valuable Player, beating out Cincinnati Reds' first baseman Joey Votto by two voting points. At the end of his MVP season, Stanton was the holder of 10 Marlins records including most career home runs (267), RBIs (672), slugging percentage (.554), total bases (1,983), strikeouts (1,140), and single-season records for home runs (59), RBIs (132), slugging percentage (.631), extra-base hits (91), and total bases (377).

On December 11, 2017, the New York Yankees acquired Stanton and cash considerations from the Marlins for Starlin Castro and minor leaguers Jorge Guzmán and José Devers. He is the second player in major league history to be traded after a 50-homer season, Greg Vaughn being the first.

Stanton hit two home runs in his debut with the Yankees, including on his first at-bat, on Opening Day 2018. He was the first Yankee since Joe Pepitone to have a multi home run game on Opening Day. On May 15, Stanton collected his 1,000th hit. On August 30, Stanton hit his 300th home run, off Francisco Liriano, becoming the 147th player in MLB history to do so.

Stanton opened the 2020 season with the first home run in the MLB for the year, hit in the first inning of the Yankees' Opening Day game against the Washington Nationals off of Max Scherzer. Unfortunately, Stanton suffered a hamstring injury in August, and was limited to just 23 games.

Stanton recovered in time for the playoffs and in Game 1 of the 2020 American League Division Series hit a grand slam in the ninth inning to propel the Yankees to a 9–3 win over the Tampa Bay Rays.

Stanton had a bounce back 2021 season after two years of injury riddled seasons, batting .273/.354/.516 with 35 home runs and 97 RBIs. Stanton went 3 for 4 with a home run and two long singles that hit off the top of the Green Monster in the Yankees' 6-2 loss to the Red Sox in the American League Wild Card Game.

On June 17, Stanton hit his 361st home run during a game against the Toronto Blue Jays, tying Joe DiMaggio as the 84th Yankees player on the all-time list. However, it took Stanton 1,800 fewer at bats to achieve this feat.

On July 8, Stanton was elected to start the All-Star Game in the outfield. It was his 5th career selection, the first all-star game selection since 2017, and first selection with the Yankees. Stanton hit a two-run home run in the 4th inning off Tony Gonsolin, which was immediately followed by Byron Buxton's go-ahead home run. Stanton was named the 2022 All-Star Game MVP.

On September 20 at Yankee Stadium, in a 9–8 win over the Pittsburgh Pirates, Stanton hit his third career walk-off grand slam. 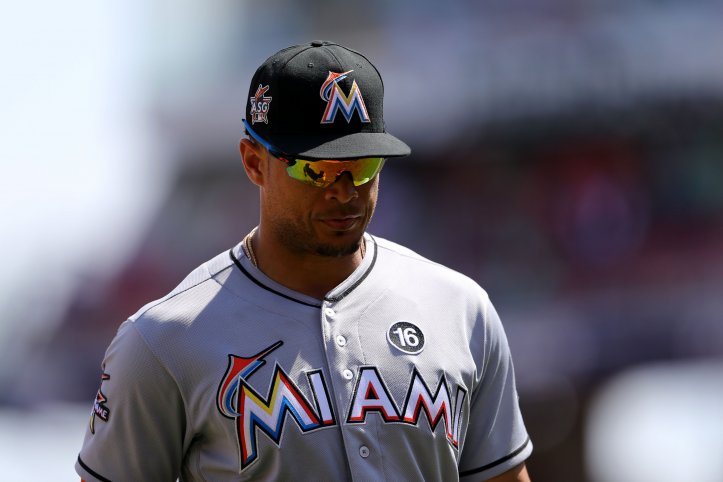 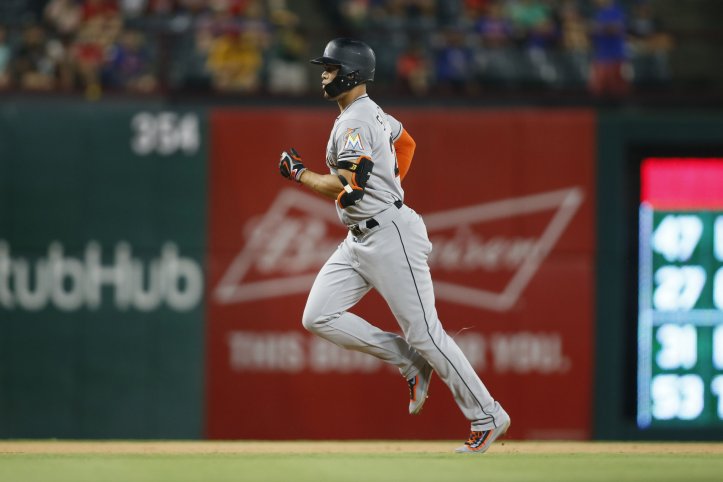 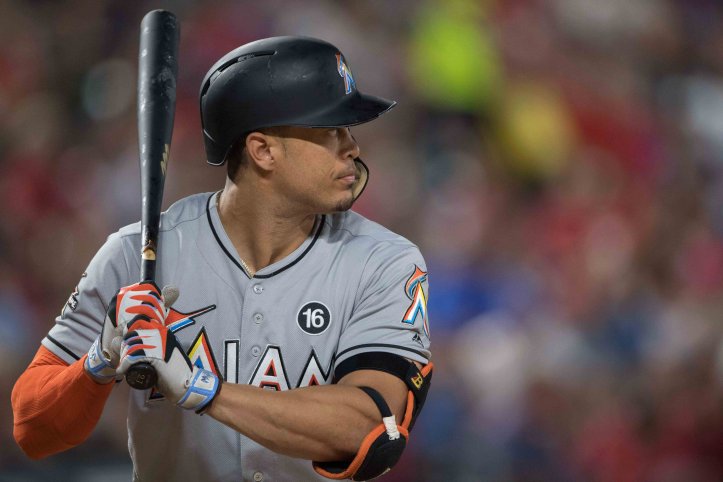 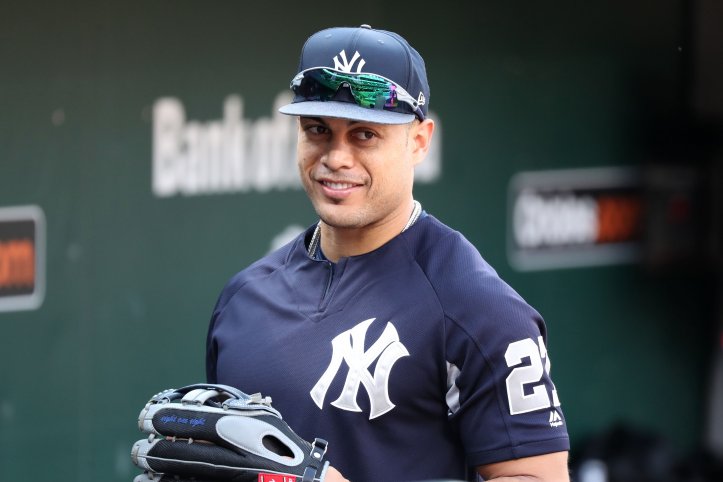 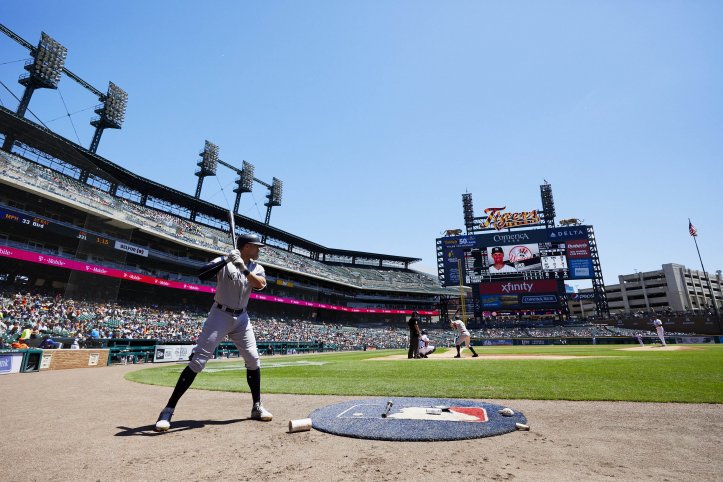 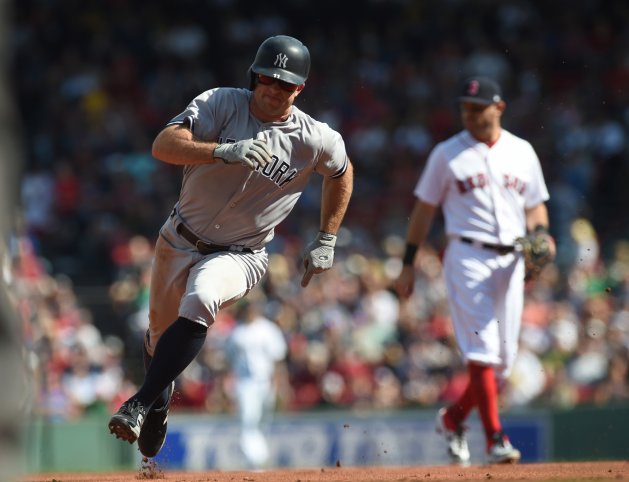 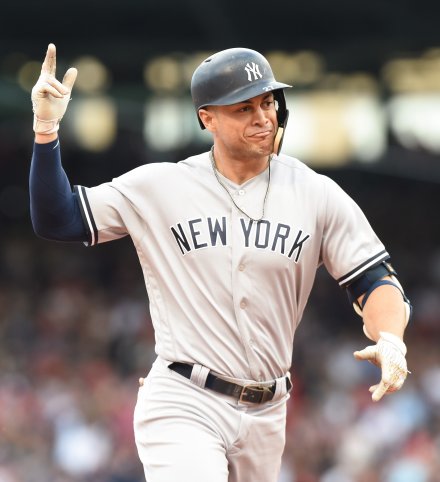 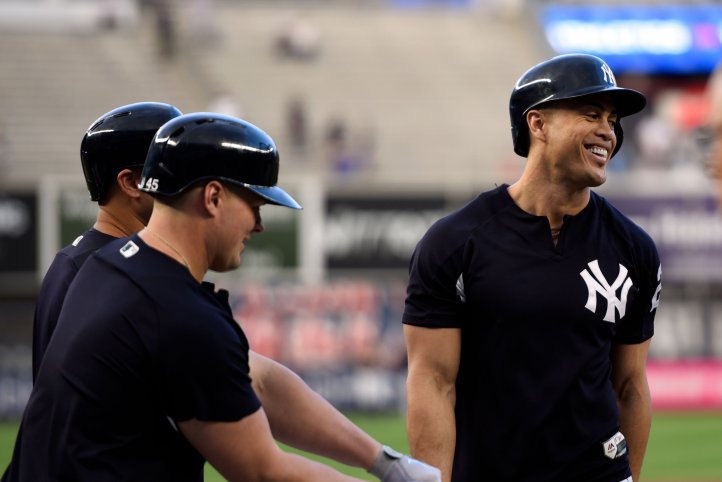 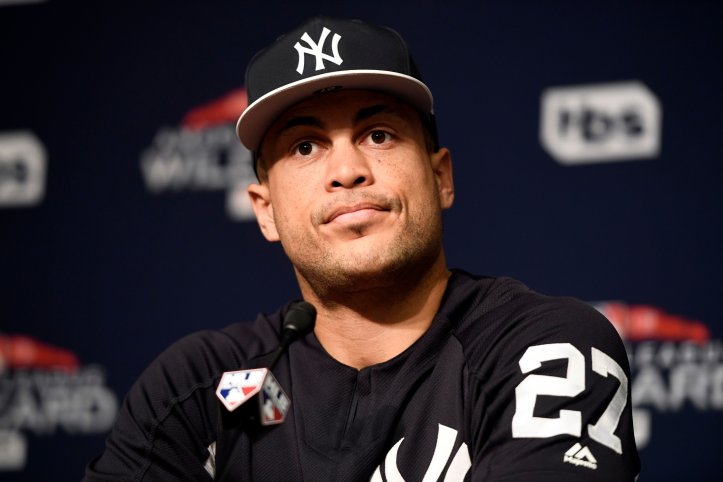 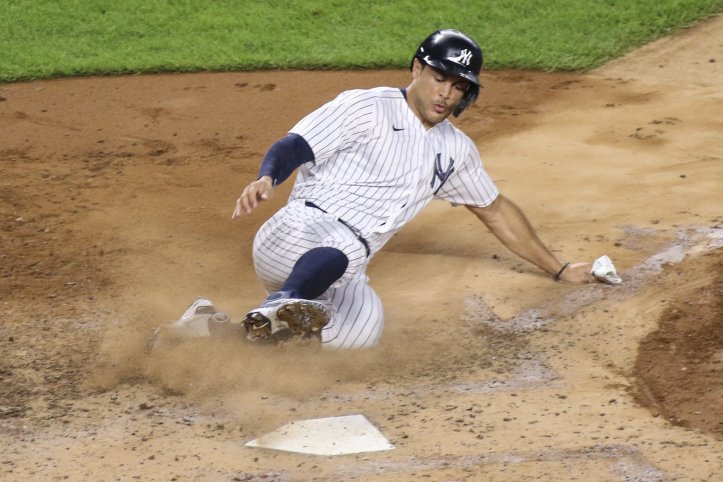 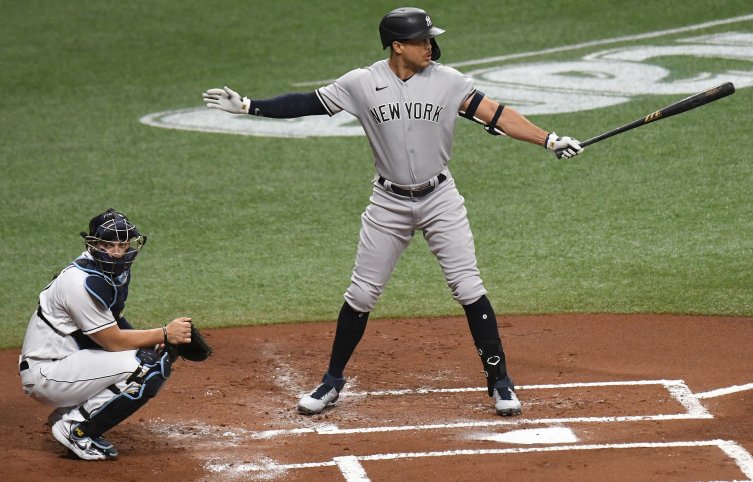 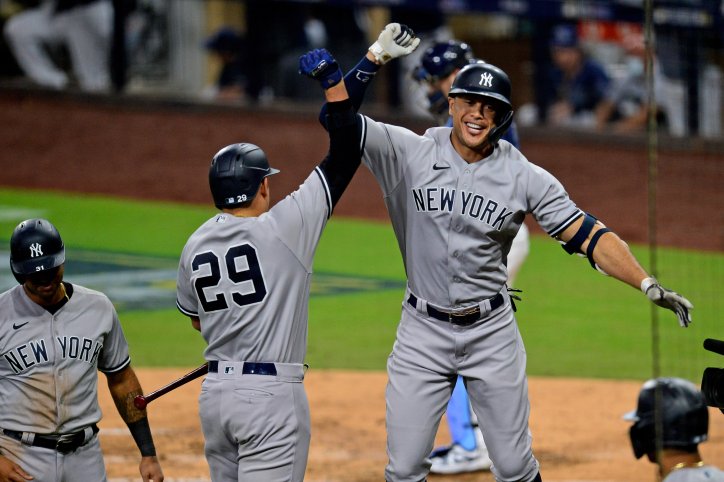 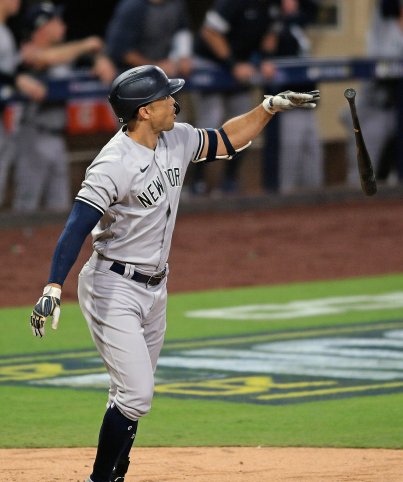 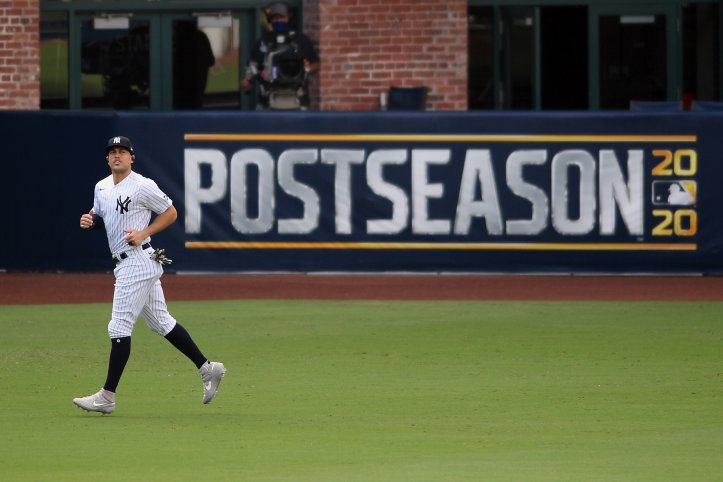 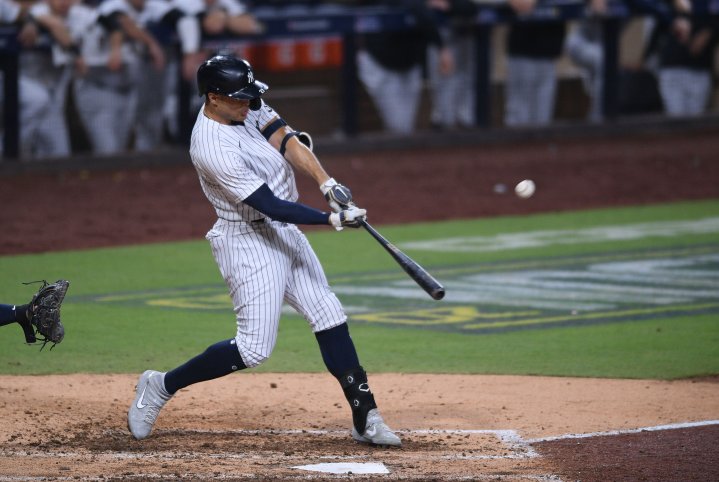 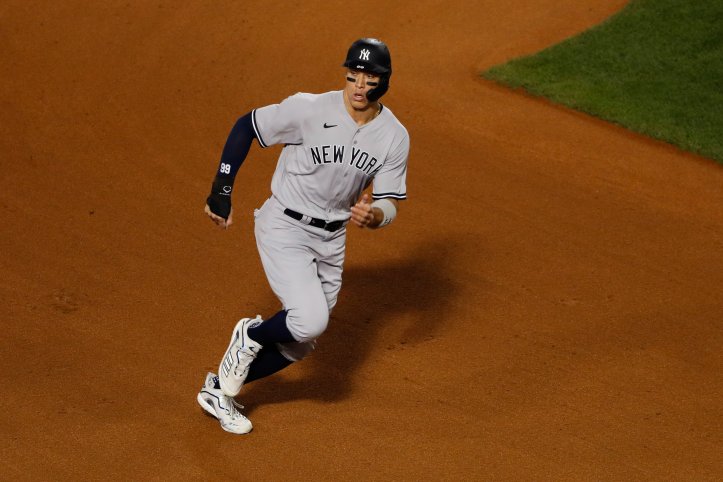 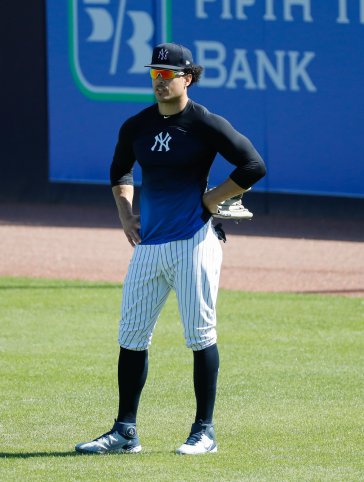