Page: What players are the favorites for MLS MVP in 2023?

What players are the favorites for MLS MVP in 2023?

By Dylan Butler | Posted 12 days ago 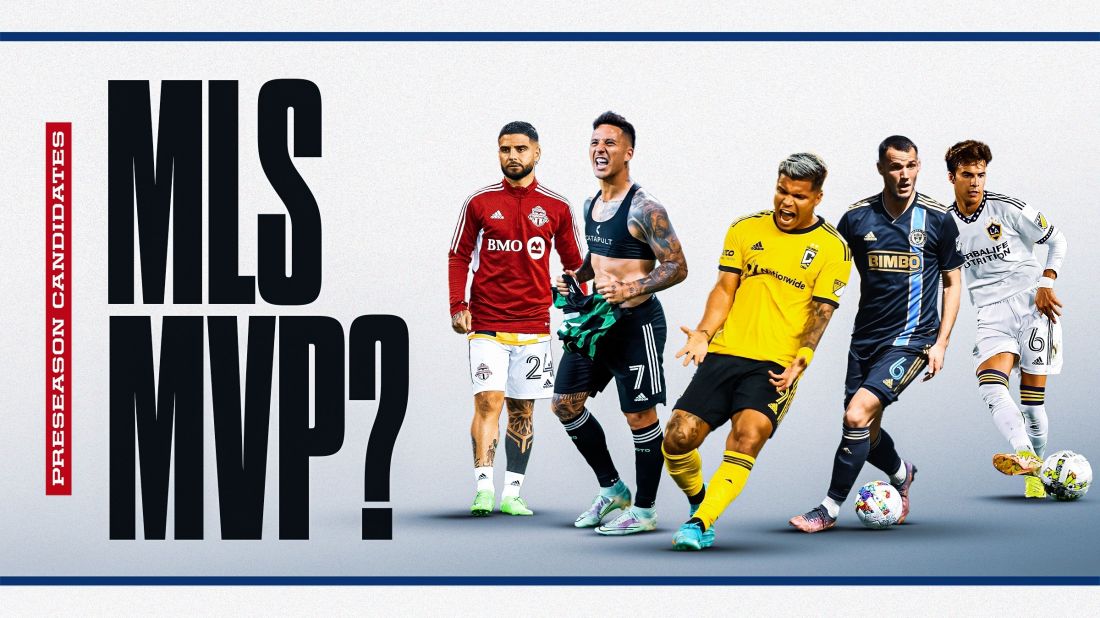 The Major League Soccer regular season is about a month away and there’s no time like the present to break down some of the preseason favorites to land the MLS MVP award.

Here’s a look at five candidates as well as a few other honorable mentions.

Generally speaking, the league’s MVP comes from a highly successful team, if not the best team in the league.

A year ago, the Union fell agonizingly close to winning both the Supporters’ Shield and MLS Cup and they return virtually everyone from that side and that includes Daniel Gazdag.

The 26-year-old Hungarian midfielder was a strong candidate for the award a year ago, scoring 22 goals, one behind Golden Boot and MVP winner Hany Mukhtar of Nashville SC, and adding 10 assists.

Gazdag was named to the MLS Best XI and he was rewarded for a career year with a new Designated Player contract and the club’s No. 10 jersey.

“I told him maybe if he dyes his hair, maybe gets a mohawk, more of the press and media will notice how good he is and maybe we talk about him – which he should've been in in the first place – with the MVPs,” Union coach Jim Curtin joked in a preseason press conference. “… He's a big part of our success, not just with the ball, but against the ball as well.”

Had Mukhtar not won the award, Sebastian Driussi would have captured it. The 26-year-old Argentine midfielder finished second in the voting in 2022 and was also named MLS Best XI after a 22-goal, seven-assist regular season and three more playoff tallies, helping his team reach the Western Conference final.

Driussi is already on a DP contract, but like Gazdag, will don the No. 10 kit for Austin FC this season. And Austin are expected to again be among the Western Conference elite, meaning more chances for Driussi to shine in a national spotlight.

Also an interesting note: Mukhtar was a finalist for MVP when Carles Gil of the New England Revolution won the award. Driussi was a finalist a year ago. Will the trend continue?

It was a relatively small sample size, but man was Riqui Puig fun to watch in his first MLS season a year ago.

Signed from Barcelona during the summer transfer window, the Spanish midfielder made 10 appearances (nine starts) and had three goals and five assists, helping steer the Galaxy back to the MLS Cup playoffs for the first time since 2019.

Now the 22-year-old is more comfortable in his environment, going through his first MLS preseason ahead of his first full season in the league. There’s a reasonable belief Puig will have an even bigger impact in 2023, especially if the Galaxy push into the upper tier of the Western Conference.

Like Puig, Insigne didn’t arrive until the summer after leaving Napoli in Italy’s Serie A, but made a big splash in Toronto. The 31-year-old Italian attacking star had six goals and two assists in 11 starts, helping get a buzz back in BMO Field upon his arrival despite Toronto failing to make the MLS Cup playoffs for the second consecutive year.

He will be another elite player who should be more comfortable in MLS in his first full season. The big question will be can Toronto climb the ladder in the Eastern Conference despite still having some glaring holes in their roster.

Cucho Hernandez arrived with high expectations as a club-record, reported $10 million transfer from Watford in England and delivered upon those expectations immediately, scoring five goals in his first seven MLS appearances, forming a terrific (or terrifying if you’re an opponent) partnership with playmaker Lucas Zelarayan.

The 23-year-old Colombian international finished with nine goals and three assists in 16 appearances for a Columbus team that missed the postseason for a second straight year, resulting in Caleb Porter’s ouster and the signing of Wilfried Nancy, who guided CF Montreal a year ago.

Again, Cucho will be entering his first full season, but will be doing so under a new head coach.

There’s never been a back-to-back MLS MVP winner in league history, so there’s that. In fact, Preki is the only player in MLS to win the award twice, doing so in the league’s early days — 1997 and again in 2003 for Sporting Kansas City. So, history is not on Mukhtar’s side.

But Nashville should again be a contender and the 27-year-old German midfielder will be at the heart of his team’s success again. Consider this, he had 16 goals and 12 assists in 2021 and was an MVP finalist, followed by a 23-goal, 11-assist season that secured Mukhtar the MVP/Golden Boot double.

Is there a higher level Mukhtar can reach in 2023? If so, history is not out of the question.

Thiago Almada ended up winning the MLS Newcomer of the Year in 2022 following a debut season that saw the midfielder lead Atlanta United in goal contributions with six goals and 12 assists after a reported league-record $16 million transfer from Velez Sarsfield.

When his first MLS season concluded, the 21-year-old was named to Argentina’s roster in Qatar and celebrated winning a World Cup.

There’s been a handful of players who won Newcomer of the Year and followed by capturing the MVP, including Portland Timbers legend Diego Valeri, Sebastian Giovinco from Toronto FC and Carles Gill of the New England Revolution.

FC Cincinnati was arguably the best feel-good story of the 2022 season as the team that finished dead last in MLS in its first three seasons in the league not only made the playoffs for a first time, but also won a first playoff game — a road win over the New York Red Bulls to boot.

Vazquez’s breakthrough was a big part of that newfound success. The 24-year-old, who had nine goals combined in his first five MLS seasons, exploded for 18 goals and eight assists, making a strong case for inclusion on the USMNT World Cup roster.

Was that career season a one-off or a sign of what’s to come for the forward? If it’s the latter, he’ll surely be an MVP candidate.

That is if Vazquez stays around. FC Cincinnati already turned down one reported $7 million bid from Chivas de Guadalajara and there will likely be additional interest especially if he gets off to a hot start.