By Dylan Butler | Posted 15 days ago 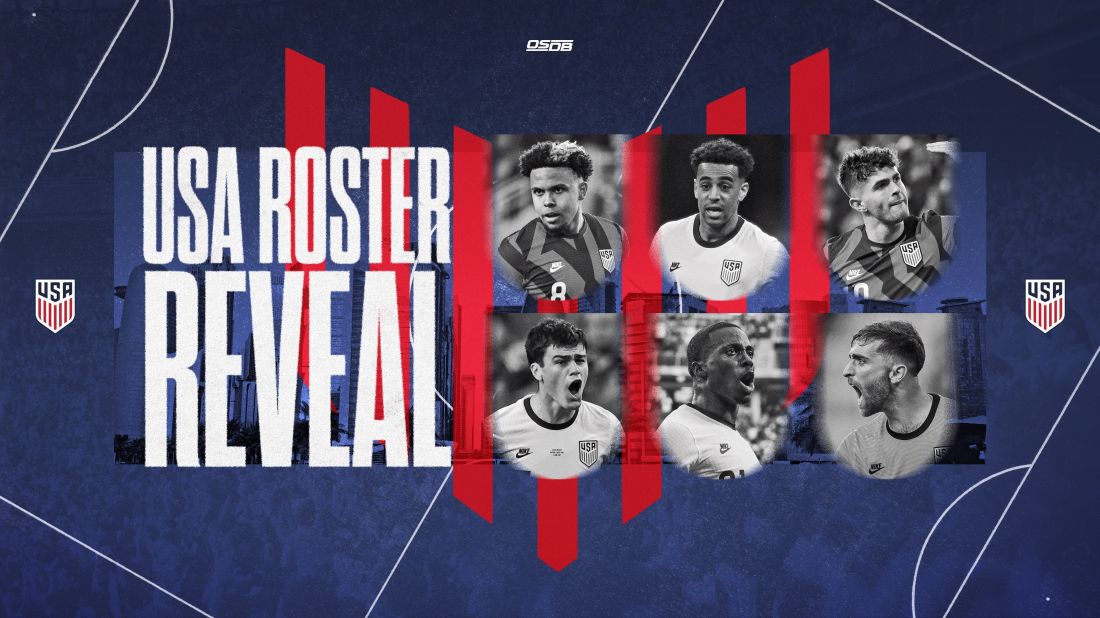 After months of speculation, the US Men’s National Team’s 26-player roster for the FIFA World Cup was revealed last week in Brooklyn with head coach Gregg Berhalter announcing a few surprises to go along with a host of clear-cut choices.

“We are excited to take this group to compete in the 2022 FIFA World Cup,” Berhalter said in a release. “Final roster decisions are always difficult, and we appreciate everyone’s contributions who helped us get to this point. We believe we have a talented group, a strong team spirit, and one that is ready to compete. We are extremely proud and honored to represent the United States and appreciate all the amazing support from our fans as we head to Qatar.”

“It was a reaction of relief,” said McKennie, the Juventus midfielder. “As much as I’ve been involved with the team since the beginning of the four-year cycle and I feel like I’ve always been around, it’s still different hearing it and to finally just have that weight off your shoulder, to be like ‘Ok, I’m on the roster officially.’ As much as maybe people may say, ‘Oh, you’ll make the roster, yeah, it’s for sure,’ this and that, nothing’s ever given, nothing’s ever secure until it’s set in stone. Just getting the call was awesome.”

Defenders Walker Zimmerman, Aaron Long, DeAndre Yedlin and Cameron Carter-Vickers and forward Jesus Ferreira were other locks, especially considering their contributions to helping the USMNT qualify for Qatar and putting the nightmares of a first failed qualification bid in 28 years four years ago.

“Every kid that plays soccer dreams about representing their country on the world’s biggest stage, which is the World Cup. For me to have the opportunity to do that, it’s an amazing feeling,” Ferreira said. “I don’t think I have any words to describe the way that I’m feeling now. I’m just honored and happy and excited that I’m able to have this opportunity at such a young age. There’s no words that can describe how I’m feeling right now.”

Although the average age of the group is 25 years, 175 days, players like Yedlin, 29, the only one on the roster to previously compete in the World Cup, fellow defender Tim Ream (35) and goalkeeper Sean Johnson (33) provide the needed veteran experience.

Ream, who appeared in just one World Cup qualifying match — a start in a 0-0 draw against El Salvador — was a little surprised at his inclusion.

“I’m really proud, really happy, really excited to be a part of the group and represent the U.S. in what is the pinnacle of our sport and be at a World Cup,” the Fulham defender said. “It’s a dream come true and something that you never expect or fully expect that you’re going to have that opportunity, so it’s one I’m grateful for.”

The biggest headlines to emerge from the roster reveal, though, surrounded players who weren’t selected. One of the biggest surprises involved goalkeeper Zack Steffen who went from the No. 1 choice to off the roster altogether. Steffen, who has struggled on loan at Middlesbrough from Manchester City, played for Berhalter when he coached the Columbus Crew, giving the duo a long history together.

“Really difficult. There's a lot of emotion involved for both him and me,” Berhalter said. “Me and Zack go way back, and Zack's been there for me a bunch of times. And to tell him he's not going to be part of the World Cup team was heartbreaking for me.”

Turner, who has supplanted Steffen as the top-choice goalkeeper, should be the starter when the US open their World Cup campaign against Wales on Nov. 21, although Berhalter was non-comital about that.

In Steffen’s stead is Ethan Horvath, the 27-year-old from Luton Town who has eight caps for the USMNT, including a heroic substitute appearance in the Nations League final against Mexico on June 7, 2021.

“Ethan is a guy that always responds when his number’s called. Let's not forget, this is a guy that got subbed into the Championship [promotion playoff] final last year and was able to hold on and get the team to victory,” Berhalter said. “He subbed on to our Nations League final, if you guys remember that, and ended up saving the penalty kick. He's a guy that’s Johnny on the spot – if you need him, he's ready. And I think that's valuable in a World Cup type of competition.”

The position that was most closely scrutinized and examined by fans and pundits alike during the qualification campaign was forward with no one player clearly separating themselves. Ferreira, who has seven goals in 15 appearances, could have the inside track on a start against Wales.

The FC Dallas No. 9 is joined in Qatar by Josh Sargent, who has heated up at Norwich City at the perfect time, who was also expected to make the team. The surprises came with the inclusion of Haji Wright, whose nine goals with Antalyaspor is tops among European-based USMNT-eligible attackers, for Ricardo Pepi and Jordan Pefok.

“As coaches, we were evaluating Haji versus Jordan Pefok, and that's what it came down to,” said Berhalter. “And in this particular case, we felt like Haji is in great goalscoring form. They're both physical strikers, Jordan, maybe a little more so, but Haji has pace, he's got the ability to go one-v-one, he's got finishing with his head, both feet, and he's performing really well in the Turkish league.

Pepi, like Steffen, was considered a shoe-in at this time last year after scoring three goals in his first two matches for the USMNT in World Cup qualifying. But the 19-year-old, who is on loan with FC Groningen after struggling with Bundesliga side FC Augsburg, struggled for club and country since his hot start until a recent stretch which has seen him score six goals in the Eredivisie in his club’s last eight matches.

“With Ricardo it was, we're judging him against Josh and Jesus, and we felt it was valuable that Josh was playing in that [English Championship] competition where two of our three opponents [Wales and England] are coming from,” Berhalter said. “We think that brings value, the physicality of the league. Dutch league I think is a great league, but it doesn't bring the same physicality that the Premier League brings and the Championship brings, and that was something that went into our decision.”

After opening Group B play against Wales, the US meet England in a highly anticipated match on Nov. 25 before closing against Iran on Nov. 29. The top two finishers in the group advance to the knockout stage.