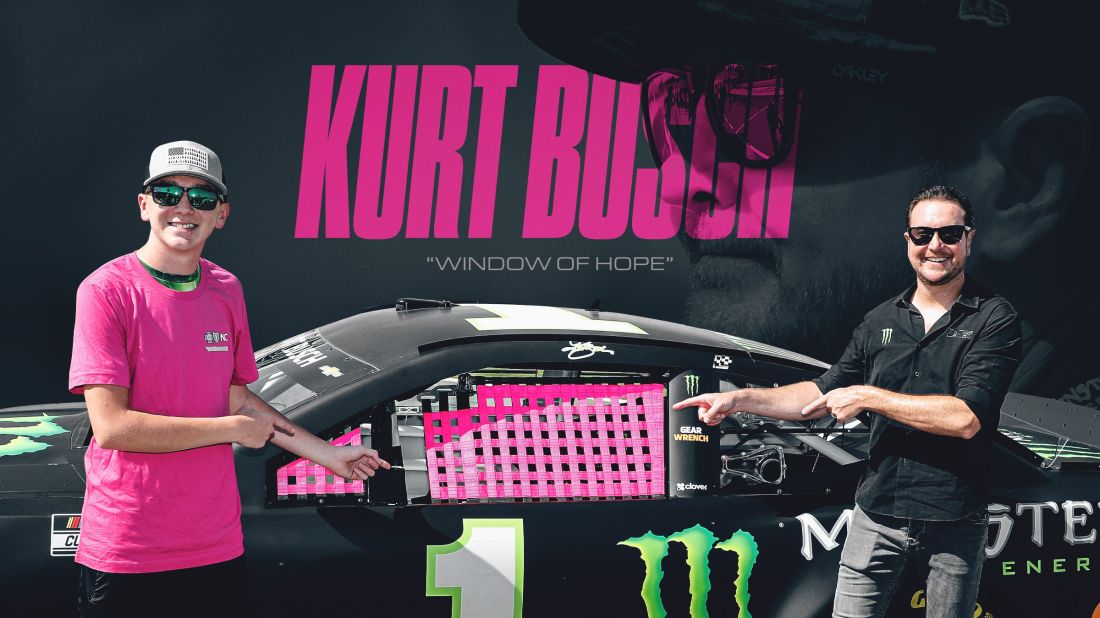 Many colors are associated with auto racing – from the wave of the green flag to start a race to the famous black-and-white checkered flag flown as the race winner crosses the finish line and claims victory.  Car numbers, pit crew uniforms and the race cars’ bold paint designs are all designed to visually grab your attention.

In the month of October there will be a consistent attention-getting color at race tracks around the country: pink -- which has long symbolized the fight against breast cancer, a cause NASCAR has diligently made prominent each Fall with pink walls surrounding tracks, pink pace cars and lots of pink driver’s gloves.

And in recognition of breast cancer patients, survivors, and all those affected by the disease in any way, NASCAR’s premier Cup Series drivers will -- for the first time -- carry a bright pink window netting on the driver’s side of their race cars for this weekend’s Bank of America ROVAL 400 on the road course at Charlotte Motor Speedway.

The idea came from a letter written by a Kurt Busch fan two years ago - 14-year- old Mason Bradley. The 2004 NASCAR Cup Series champion was so moved by the concept he has gone to great lengths to finally bring the concept to reality.

“When my group goes through the fan mail there’s always some simple requests of wanting a hero card and there’s some that ask for a signed card and sometimes they send in diecasts [small scale replicas of Busch’s car] to sign,’’ Busch explained to OSDB Sports. “This one was a letter with a drawing of the Monster car [Monster Energy which sponsors Busch’s No. 1 Chevrolet] saying maybe you could have a pink window net one day because my mom is going through all these breast cancer problems right now.

“This is from a young boy who loves the Monster paint scheme, I’m his favorite driver. We all looked at each other and said, we should be able to do something with this.’’

In theory, having a pink window net seems like a simple highly-visible way to recognize those dealing with the breast cancer. But Busch discovered there was actually a lot to consider from a technical and practical standpoint.

First, he had to get permission from NASCAR Chairman Jim France, then a thumbs-up from Marcus Smith, whose Speedway Motorsports Co. owns the Charlotte track. Both of the sports leaders were immediately and whole-heartedly behind the idea. Beyond that, there were technical approvals on the pink coloring it is only on the outside of the net, not the inside so as not to distract the driver’s vision.

“It was with NASCAR for a good three months on their testing sled,’’ Busch explained. “So, lots of homework was done and it was a process, I just stayed adamant about it as NASCAR, all the drivers and teams and crew chiefs were looking at this. I sent a nice letter to all the teams and Hendrick, Gibbs, RCR [Richard Childress Racing] and of course, [Busch’s team] Chip Ganassi Racing, and everyone was on board.

“None of the drivers objected to it and so now it’s just a matter of each team getting the sizing they want for their net and from what I’ve been told, we have 100 percent of the teams that are committed.”

“There wasn’t any kind of kickback or friction,’’ Busch said, noting how heart-warming it feels to have such support.

“Everyone was sending me thumbs-up emojis with pink hearts and so I think it will be a big surprise once they’re all up and we take the green flag. That’s going to be the emotional part and after that, I’ll jump into the race and try to win at the ROVAL.”

As for the now 16-year-old Bradley, who came up with the idea, he and his mother Stephanie, who is in remission from breast cancer, will be special guests of Busch’s No. 1 Monster Energy Chip Ganassi Racing team this weekend in Charlotte.

“It was a really good surprise,’’ Bradley said last week. “At first when my parents told me that Kurt wanted to do what I said in my letter, I didn’t believe them until I saw the actual letter that was sent from his shop.”

“They were at the event to paint-the-wall pink at Charlotte and they’re going to come back to the race and be our guest with the No. 1 car,’’ Busch said. “They’re going to sit on the pit box, we got them a suite up top so they can see all the cars racing with the window net.

“It’s one of those moments when a fan writes you a letter and it turns into a big- time moment for the family.”

Something that Bradley will forever remember and appreciate.

“My mom’s my hero so anything I can do for her to give back,’’ Bradley told OSDB. “She has always done so much for me my entire life. Just so awesome.’’

Beyond this immediate, highly visible effort to raise awareness for those affected by breast cancer, Busch was able to work with the sport’s primary philanthropic arm, the NASCAR Foundation for the ultimate “curtain drop” on the project.

Each driver will autograph his window net and the NASCAR Foundation will hold an online auction so fans can bid and win a “Window of Home” net from their favorite driver. And the proceeds will go toward breast cancer research for those families currently dealing with the challenges of breast cancer treatment.

Go to www.NASCARfoundation.org/pinknets to place a bid.

“I think at the end of the day, to create a window of hope gives a feel of recognition for people that are struggling with breast cancer and those that have gone through it and are now in remission,” Busch said.

“And at the end of the day, we have the truck series, the Xfinity Series, why can’t any racing series around the world now have a pink net for all the races in the month of October.

“We wanted to start with a big flash, make a big mark and this could be something that will trend for a long time.’’